Annabelle (2014) [The Deadly Doll's House of Horror Nonsense's The Shortening] 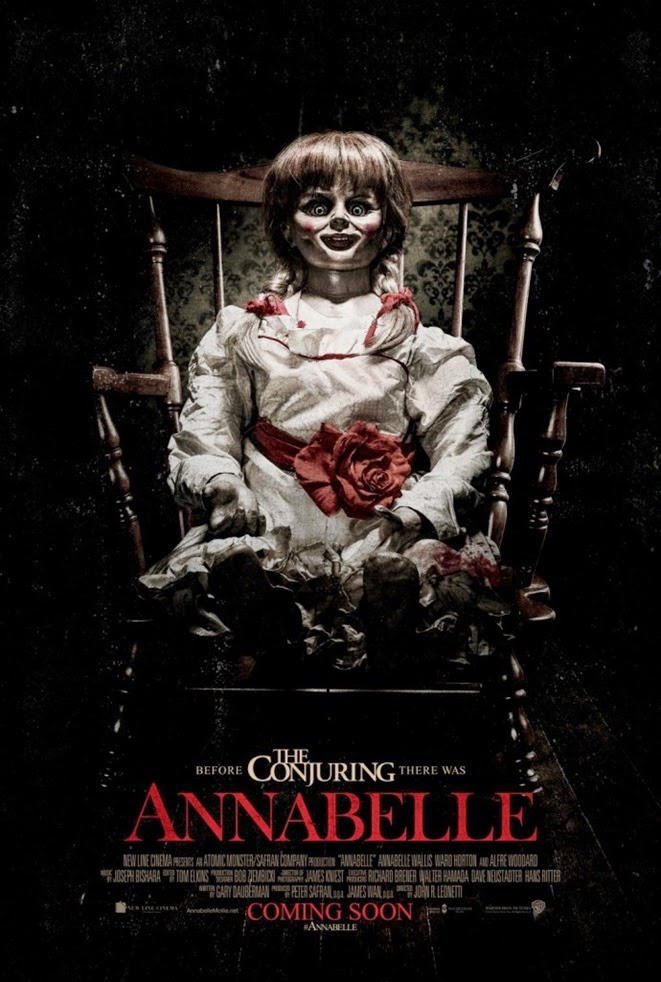 The Conjuring was a lauded horror movie, and its 'true life' (quotation marks may or may not be necessary, depending on whether you believe the tale to be true or not), and it was certainly an all-round better ghost story to be told involving the husband-and-wife paranormal investigation team the Warrens than the Amityville Horror! One particular part of The Conjuring really struck a chord with people-Annabelle the doll.

Mia and John Form are a happy new couple who've just bought a new home in the suburbs. Their happiness is short-lived when two satanists try to murder them, and one kills herself over one of Mia's collectible dolls. Soon after, strange and horrific things begin happening concerning the doll known as Annabelle

Annabelle is a by-the-numbers example of a cheap cash-in sequel. It wasn't made because someone felt that they had an interesting story to tell about Annabelle, but rather that The Conjuring made a slaughtering at the box office, and a studio assumed people would all flock to see something tangentially related. You know, I wouldn't have minded that this movie was a cash-in had it actually had a compelling plot, but...

Annabelle is a been-there-done-that Satanism film. Didn't we get enough of those in the 70's?! This film tells nothing that hasn't already been told a million times already. What's worse is that there's really not much at all to the story. It goes by slowly, telling a pretty barebones tale, then it ends. There is absolutely nothing special to Annabelle. What's even more aggravating is that this plot is almost totally different to the real-life Annabelle story! Even the doll looks completely different!

There are some really stupid things about this movie's plot! First of all, the fact that Annabelle was 'created' because an evil crazy satanist committed suicide on it is very unsubtle. Even if you do feel that knowing Annabelle's origin would actually make it more effective rather than having it be more mysterious, a subtler alternative to this would be preferable.

Next up. The lead character's two friends and neighbours are brutally murdered, then the killers impale her through the belly, almost killing her and her unborn baby, and then they die on top of her collectible doll, covering it in blood. Naturally, Mia wants the doll gone, and her husband throws it out, but when it ghostily comes back, she's glad, and wants to keep the doll! OK, nevermind the fact that that no regular person is going to get an absurdly grotesque doll such as Annabelle as a 'sweet toy', especially for a baby (it made sense in real life because it was an adorable Raggedy Ann type doll). What's really stupid is that Mia wants to keep it after all the crap that's happened to it!

This isn't a very scary movie either. What scares there are are either overdone, or just dull. There is one really good one when a little girl ghost runs at the lead, a neat moment with a bellowing demon preacher clone, and another scene that's almost well-handled, until the end! This scene centres on the lead being stuck in a pitch black basement with something demonic. Things go well, until the film shows us the demon closeup! Before this, it was only seen in very partial silhouette, and therefore the scene cultivates a neat atmosphere, but then it ruins everything with this unsubtle jump scare. Instead of being scared, this scene is liable to just make everyone who watches it laugh their ass off!

Ultimately the worst thing about Annabelle is that the doll barely appears! It never even moves! Or talks! Or kills anyone. Or anything! It's a completely motionless doll that could be excised from the plot, and the film wouldn't lose a thing

There's little in the way of effects in Annabelle. What there is is decent, save for the laughable gargoyle.

The acting in this movie is all decent. Nothing special, but it's tolerable. What's amusing is the coincidence concerning the lead actress' name-Annabelle!

To finish, Annabelle is an extremely mediocre horror film, and be thankful that there's not going to be a real Annabelle Meets Chucky movie. That would just be nonsensical and stupid. Not only do the two genres not mix, especially seeing as how the Conjuring universe is meant to be the real world, but also, Annabelle never talks, or even moves, so the whole concept just has nothing to stand on. One thing is likely though-We may get some form of follow-up to Annabelle, considering that this movie made for 6 million dollars made 255 million bucks at the box office! Granted, how the studio can hope to make a franchise about a horror movie where nothing happened, I've no idea...

This post is for The Shortening, a blogathon set up by Emily of  The Deadly Dolls House of Horror Nonsense.
Posted by Chris Hewson at 7:54 AM