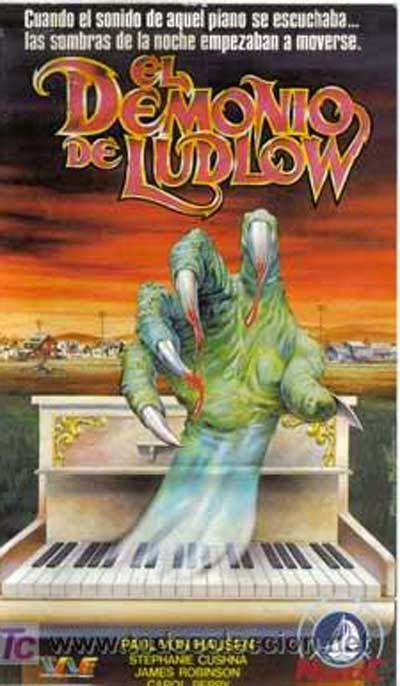 Wow, The Demons of Ludlow is yet another Bill Rebane flick that's mildly tolerable! Maybe next time I should go watch Monster A-Go-Go, and see what he's like when terrible, because as it stands, I've seen this, and Rana: Legend of Shadow Lake, and both aren't bad!... 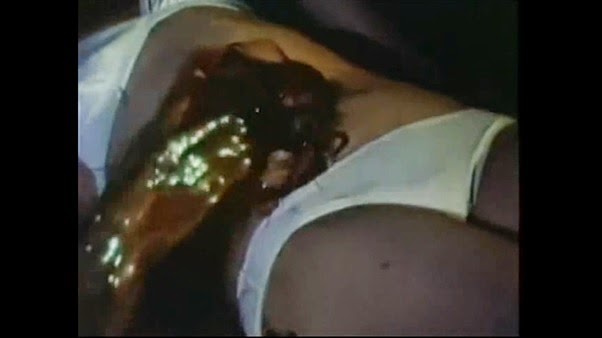 Ludlow is one of the oldest towns in Armerica, having been settled by the Pilgrims. Now, on the town's bicentennial, strange things start happening, and people start dying. While the skeptical mayor refuses to buy into the supernatural forces at work, and does nothing to help matters, the local preacher tries to halt the evil at work, and Debra, an inquisitive news reporter, seeks to learn the truth about Ludlow's purged history...

The Demons of Ludlow isn't quite boring, or even dull, but only by a fraction! The story has a lot of potential, there's almost a really interesting tale here, and the old Pilgrim township stuff provides a nifty backdrop and history for the plot, but unfortunately the incredibly thin story just meanders along until it's over. Not a whole lot happens, and while there's never a point where the film outright stops and becomes intolerably boring, I can easily see how someone could lose interest. It doesn't help matters that all of this culminates in an absolutely bizarre ending, which resolves practically nothing, and stops moreso than it ends! 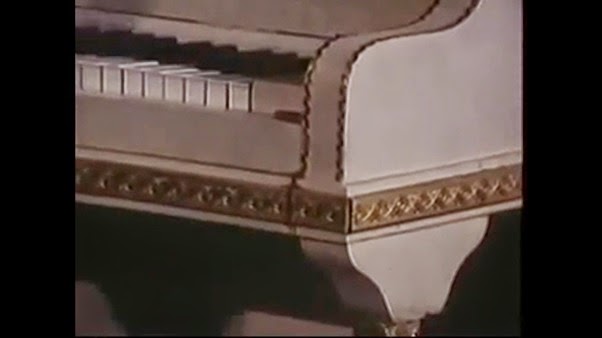 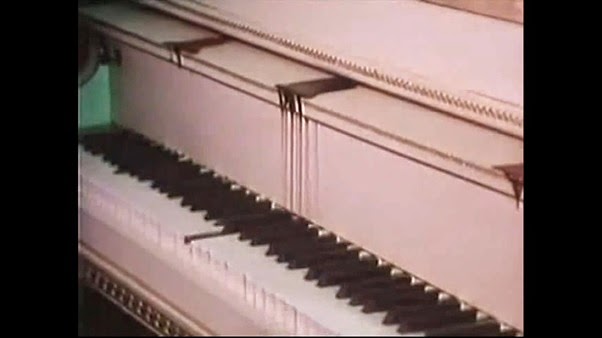 One thing this movie did REALLY pissed me off. About half-an-hour in. we're introduced to mentally impaired teenager Emily. For the next ten minutes almost, we get an insight into her mind as she's got her community of dolls she talks to. Then she goes downstairs to investigate some strange goings-on...and is instantly consumed by the undead. As if wasting an interesting character you built up for so long wasn't bad enough, it also feels the need to meanly strip her nude before eating her alive! In fact, there's another female character who's stripped before getting murdered (or attacked. I forget). It's a good thing that nothing like this happens again, otherwise I'd be under the impression that The Demons of Ludlow hates and demeans women! 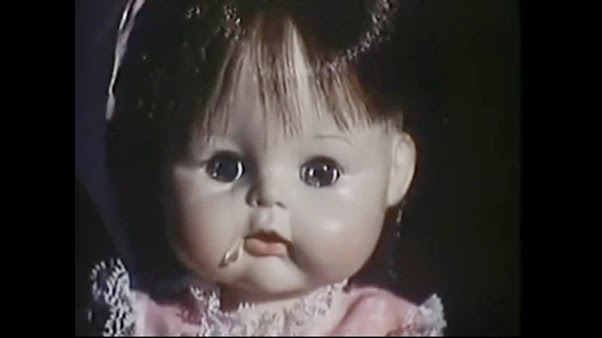 The characters in this film are an incompetent bunch, especially in the climax, where instead of just dousing the evil piano in kerosene and burning it, they set the evil ghost totally free in the hopes that that'll appease him! You idiots! From then on, they immediately try to axe the piano up, but preacher Chris only gets one strike in, then never attempts any more, even though he totally could, and that might save all of Ludlow, as well as his hands! There are also several moments in the last half-hour of the movie where you'll be yelling "RUN, you idiots!" at the screen repeatedly.

The main protagonist in The Demons of Ludlow is totally useless! While Sam the preacher already knows what's going on, and is trying to stop it, Debra knows nothing, doesn't even realize that deaths or spooky things are even happening, and is only clued in on things at the 70 minute mark! Yeah! For over an hour, the film's main protagonist's only goal is finding out about a piano's backstory! As for the antagonistic Ephraim Ludlow, and his mean ghostly daughter, they're barely there. The daughter appears quite a bit, but she's just standing around for the most part, even when things are happening. Sure, she may be holding a pair of severed human hands, but she's just standing around! 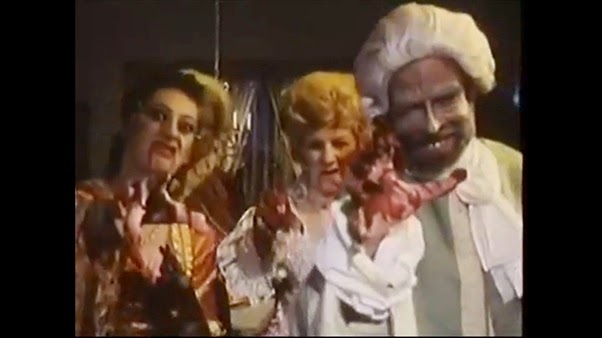 There are a few unintentionally funny aspects to this movie. The first is that the town of Ludlow is celebrating its bicentennial, and several times over the course of the film, characters mention how it's one of the very first American towns. Excuse me? Not even if this was Ludlow's thricentennial would that even be remotely accurate! Also amusingly anachronistic is how much the 200 year old piano sounds like an electronic keyboard!

There's some pretty terrible dialogue here too, like "You notice something?"-"Yeah, town's dead."-"It's like a ghost town. I don't have a weak stomach, but I do have goosebumps! Might be because I'm cold." (It's a winter's night in a town with a population of just 43-No shit it's quiet! Also, it might be the snowy cold, and not the atmosphere giving you goosebumps? You don't say!) and when presented with the story that Ludlow is cursed by murderous ghosts, Debra says "My God, it's 1983. Things  like this just don't happen!" (Don't tell the Warrens that, or they'll be out of a job!). 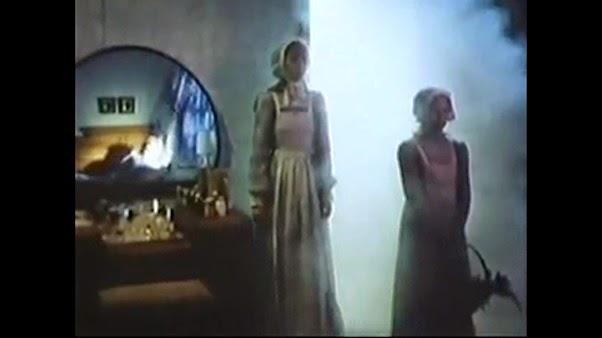 The death scenes in this movie are mixed. Some are quite well done, particularly the stoning/hanging/ceiling netherworld pull, but others are hampered by terrible gore effects, such as the girl in the barn who gets strawberry jam smeared all over her chest, or the decapitation where the beheading itself is completely effortless and bloodless! The scares themselves are extremely weak! For practically the entirety of the film's runtime, one of the only scares we get is the piano playing itself a lot!

The effects here are pretty bad for the most part. Some are decent, but the monster-ghosts look unthreatening (and some oddly resemble Aphex Twin), and the gore is more than a little sub-par! It's pretty terrible in places. Thankfully no strings are visible, but for certain objects (like the levitating fire poker), it's really obvious from the way they're rocking back and forth that they're being help up by wires. In one scene, a piano leaks blood, but there's so little of the red stuff that you'd think it was a genuine hire piano, and they'd void the deposit if they got too much Hershey's Red Syrup on it! Even when the movie goes all out on the piano at the end, there's still not THAT much blood! 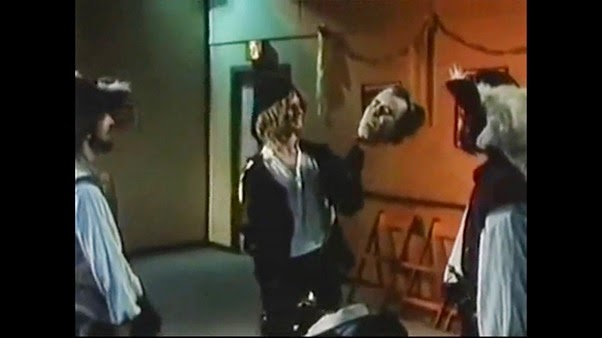 The acting is this movie is ok. Never outright bad, but rather mediocre all-round, and the extras look just plain bored. The leads are only just tolerable, and Patricia J. Statz (R.I.P.) is decent too. For some of her delivery, I can't tell if her performance not so good, or if it's deliberately stilted, as she's playing someone mentally disabled. Unfortunately her character is written out of the movie way too soon. Another actress of note who's underused is the girl simply credited as Angailica. She plays the evil ghost girl, and she gives some pretty good nefarious looks!

The score to Demons of Ludlow is mixed. The composition is good, both stylish, period, and ooky, but the music itself kinda fails. It's not that it sounds bad, but the instruments seem off. It feels like the instruments being used are ill-fitting for the music they're creating. Casio keyboards do not lend much to period Pilgrim music. 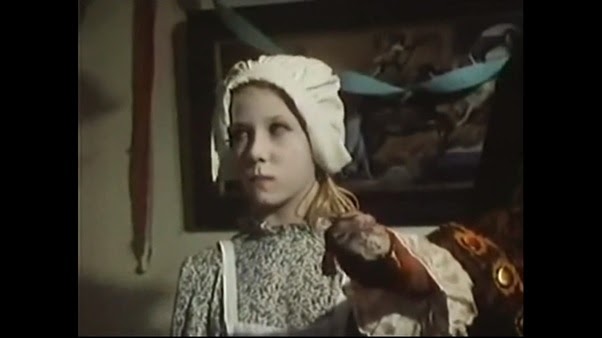 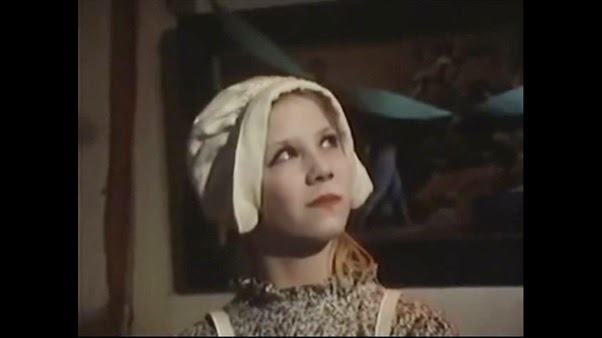 By the way, not only is the main theme a (predating) soundalike for the Bloody Tears theme from Castlevania II: Simon's Quest, but also of Garth Marenghi's Darkplace! Neat!

The Demons of Ludlow has a lot of potential, but sadly wastes it all, and ultimately, Stacie Ponder does indeed have all the Ludlow pie...

This post is for The Shortening, a blogathon set up by Emily of  The Deadly Dolls House of Horror Nonsense.
Posted by Chris Hewson at 7:30 AM