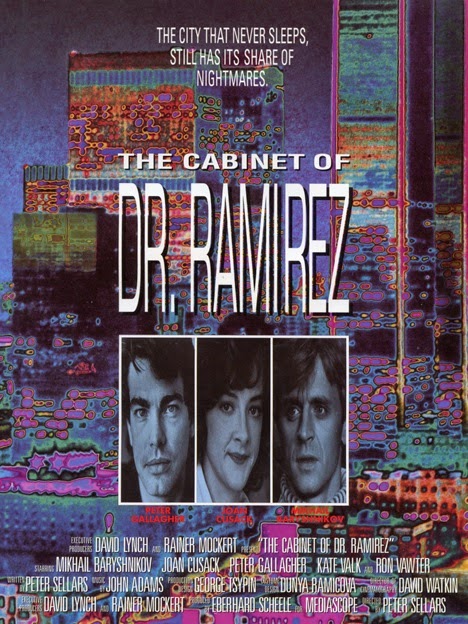 The Cabinet of Dr. Ramirez is an experimental film with a multitude of problems, first being that it's boring! REALLY boring! In the first ten minutes, we get dramatic music over such amazing and complex visuals as...people motionlessly reading, or quietly eating lunch with a bro. This starts the film off on an immediate bad foot, and things don't improve! 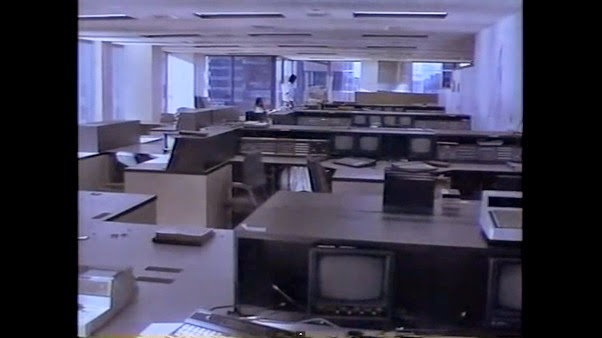 Now, onto the film's artistic qualities and themes. It's allegedly about the Wall Street stock market and financial crisis, to do with the Reagen and Bush administrations. Excuse me?! What on Earth does that have to do with Dr. Caligari? Body-horror sex in Sayadian's Caligari was already something far removed from the original film, but this is beyond ill-fitting! At least the 89' Caligari's portrayal of sex was rife with insanity, and wasn't boring politics and insider trading!

I say allegedly because those 'themes' are only second hand knowledge I have from art museum screening profiles, other reviews, and info from Sellars himself. They don't come across in the movie at all, thanks to its complete lack of plot, dialogue, or even symbolism and thematic cues! Peter Sellars with an A's hilariously pretentious and factually iffy introduction to the movie doesn't help matters.-"This movie is goodbye to the 80's, and a film for the 90's. Basically, the end of the yuppies, the end of the Wall Street superstructure-The spiritual recession-and directly into the heart of the current crisis, which, hopefully, is the useful one-A search for something that's actually valuable. An attempt to define America in non-materialistic terms. This is a silent movie, in colour, with wall-to-wall music by John Adams, and the Tibetan monks of Dharamsala. The film is therefore...[laughs]...hardly silent, and in fact makes an enormous amount of noise, but people don't talk in it. Why is that? Well, for one thing of course, the great age of cinema acting of the silent movies. The great D.W. Griffith, the great Murnau, the great Gish sisters, and so on. That's a level of acting that one rarely sees, because it comes from a kind of liberation from the soul. Performers who are able to go deep, deep, deep within, and were very, very privileged in this film that you're about to see, to have a great series of artists offer something very profound. Of course, beyond that is the fact that perhaps you could say my generation-the generation of the 80's-was a silent generation. We didn't speak out. Certainly nowhere near enough, and I suppose the silence of this movie, the characters in this movie, has to do with that. Also though, and perhaps more seriously, 80 percent of your life, at least, you're not talking. We don't talk all the time. Most of our lives, we spend watching, listening, thinking, and feeling. And theatre, and movies that come from theatre, basically make you think you talk all the time, but what actually are you doing most of your life? This is a movie about most of your life, when you're not saying anything. The minute you start to talk, you of course always begin inventing things, and, well, lying, frankly, and this film is an attempt to get past the point of lying. Both before it, and after it, to a point where you haven't even convinced yourself what you think, much less attempted to convince anyone else. Those private moments, those personal moments of pure feeling.". 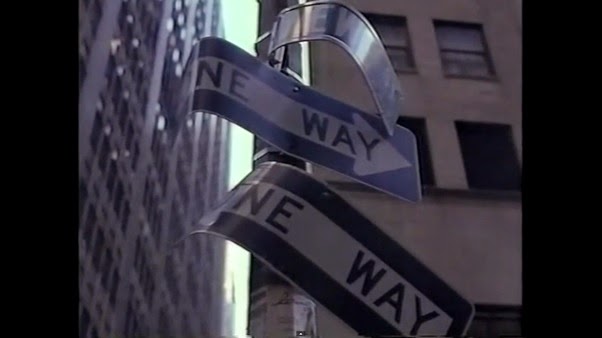 To be honest, it seems like this film's only message is 'The homeless are evil, and you should mistrust and openly abuse them.' Overall, I really don't think someone who hires a white guy to play someone named Ramirez should be in a position to judge Reaganomics!

Finally, what little symbolism there is in The Cabinet of Dr. Ramirez is REALLY unsubtle, like the twisted 'one way' signs, or when we see a newspaper headline saying "No problem", then police abusing the homeless. 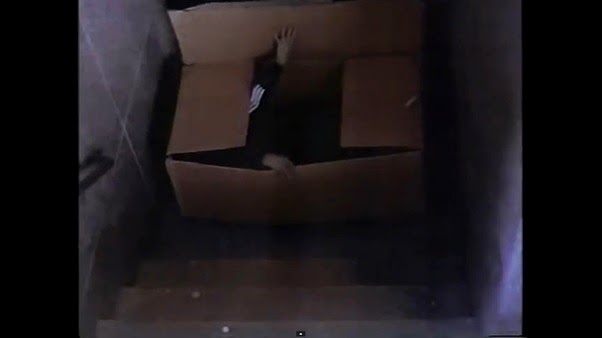 The Cabinet of Dr. Ramirez has nothing to do with The Cabinet of Dr. Caligari! It's supposed to be a remake! That's what it said it was! That's what it's titled, yet this beast bears zero resemblance to the 1920 movie! Even the 89' film was about a character named Caligari, and a mental asylum, but this film tells a nothing story of...people, who...work in a building...and occasionally interact with homeless people, leading to a murder...following which a series of unrelated and contradictory events happen until the end. The only connection this film has to Caligari is the bullshit twist ending, which is not only cliched, not only does it come out of nowhere and not make sense within the context of the movie, but it's also a cheap attempt to ape Caligari, and force a connection where none exists! This is like if you watch Philadelphia, but in the last five minutes, it actually ends by revealing that Tom Hanks' character is really a serial killer dominated by the split personality of his dead mother! That wouldn't make Philadelphia a remake of Psycho, and it doesn't make The Cabinet of Dr. Ramirez one of Caligari! 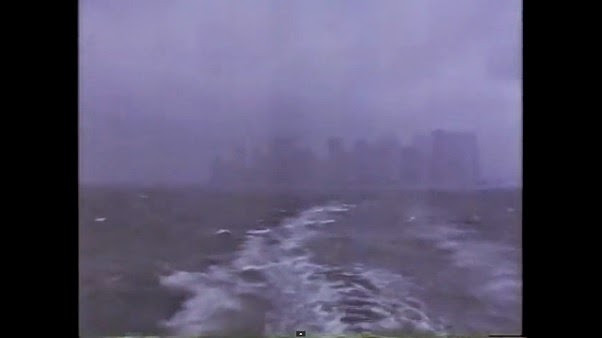 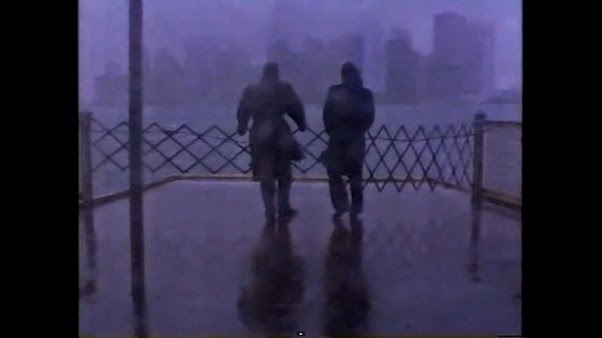 The next worst thing with this film is the total lack of dialogue! This is done partially to emulate silent films (with the other reason being in the above quote from Sellars), of course, but it seems like the movie is under the mistaken belief that silent films have no dialogue, which isn't true! Characters talked all the time! We just didn't hear them, and their dialogue was presented through intertitles. Can you imagine watching something like Dr. Mabuse: The Gambler, or even the original Caligari, without any dialogue?! It seems like Peter Sellars with an A has never seen a silent film before in his life, least of all The Cabinet of Dr. Caligari! 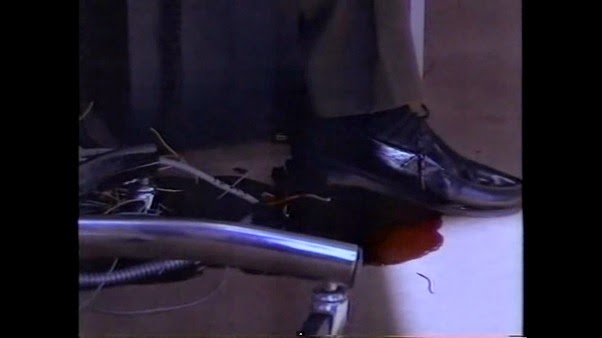 Another thing this movie lacks is an aesthetic. Rather than using stylised curved locations and scenery like the other Caligari movies, we're instead stuck in the boring real world, which is ill-fitting for a Caligari movie. It tries to be weird with camera angles some of the time, but they're not effective, and neither the direction nor the editing are all that inspired.

The acting in The Cabinet of Dr. Ramirez left me cold. The performances aren't technically bad, as there are no real performances here. None of the actors emulate the classic Silent actors, and when they do show an emotion that's expressive enough for a silent film, it's repetitive, and either overdone, underdone, or just confusing.

This film insultingly wastes its cast. Not only does no-one get a real chance to act, but you do NOT waste Peter Gallagher's voice! And you don't waste Ron Vawter either! 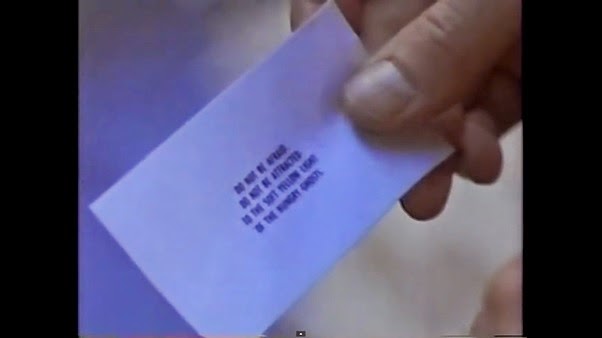 The four lead players in The Cabinet of Dr. Ramirez are given writing credits, and I suspect that's not because the helped 'write' the story, but because since there's no dialogue, they were more in control of what their characters were doing than if there was a regular script. Listed as an executive producer is David Lynch, although how much involvement he had in the film, I don't know.

The score to this movie is terrible! It's tolerable sometimes, and the monk chanting gets decent here and there, but the soundtrack is downright unbearable in places, repetitive in others, and frequently way too loud. Amusingly enough, one piece reminded me of the scene where the Vogons destroy Earth in the Hitchhikers Guide to the Galaxy movie. You know where it just keeps zooming out, revealing the scale of the Vogon fleet, and the final sting of the tune is dragged out like ten times? This movie has music that sounds like this, except its use is totally sincere! 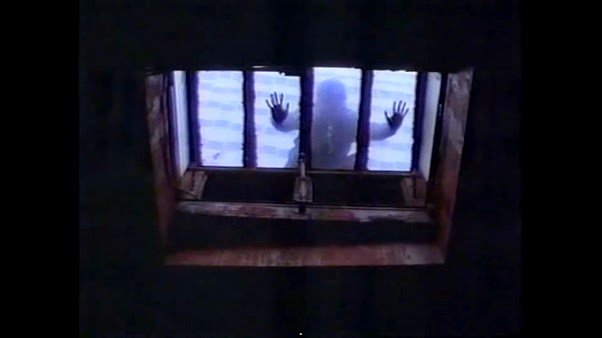 I love, love the 1989 Dr. Caligari, and even that still pisses me off with its purported 'connection' to The Cabinet of Dr. Caligari. With that in mind, there's no way that The Cabinet of Dr. Ramirez is going to get a free pass in my eyes! It's a terrible movie, and an even worse adaptation, with no artistic merit I could see...
Posted by Chris Hewson at 3:35 AM