Back in the 1990's, when video game developers discovered the wonders of CD's, they immediately were awash with ideas of what they could use this new technology for. Unfortunately, they never stopped to wonder whether they should, and we got FMV games as a result. Now, not all Full Motion Video games were bad (the Tex Murphy games are fantastic!), but the majority were crappy gimmicks, which either had ridiculously star-studded casts, or a complete lack of any remotely competent actors. One FMV game that slipped under everyone's radar, and has been mostly forgotten, is Realms of the Haunting. It's one of the good FMV games. It's a horror story with a unique plot, and twists and turns, but it has many problems  and some truly cruel mazes and puzzles that'll make you want to hurl your keyboard out a window! I won't be discussing the gameplay here though, but instead I'll be reviewing the movie/story aspect of it, which is possible given the game's technical genre.. 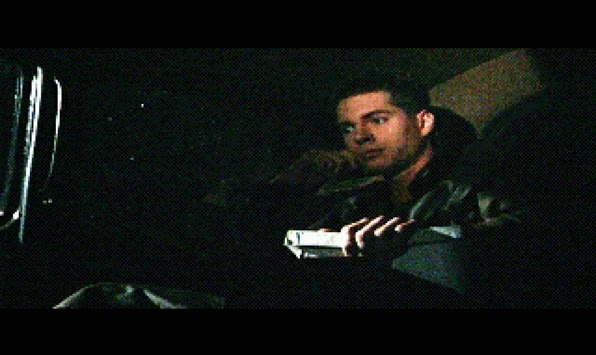 Adam Randall is a Canadian who's back in his birth country of England, trying to uncover suspicious circumstances surrounding the death of his father. He arrives at the mansion of shady fake priest Elias Camber, and is quickly locked in. Adam finds much evil in this mansion, such as Camber himself, aka Claude Florentine (least threatening name ever!), the man-child antichrist vessel Gaul, and Belial, the demon of lies, but he also finds much aid in the form of psychic Rebecca Trevisard, ghostly knight Aelf, Hawk the archangel, and others. Adam learns of the interdimensional struggle between good and evil going on in this house, and if he wants to save the world, and his father from eternal torment, Adam must accept his responsibility and overcome all the sinister obstacles in his way...

Realms of the Haunting is a very intelligently plotted game, rooted heavily in theology. The story is very Christian (in context of the story, not in preaching or proselytizing), and is so full of symbolism and subtext that it's brimming. It's clear that the writer(s) put a lot of work into this. The story is pretty high-concept, and flows along nicely for a while, but then...

You know how when you watch certain movies, it takes you a while before you can tell if they're merely slow-moving, or just plain boring? Well, when you play Realms of the Haunting, you don't notice when you're playing through the game's first two thirds, but when you reach the finale, you realize that all you've done is do a lot of puzzles, some more annoying than others. Not only does this ultimate realization cripple one's perception of the game, but it also tanks the story, as it's not allowed to be told to its fullest potential. 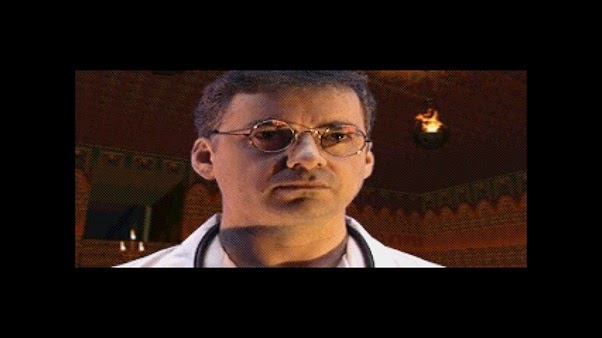 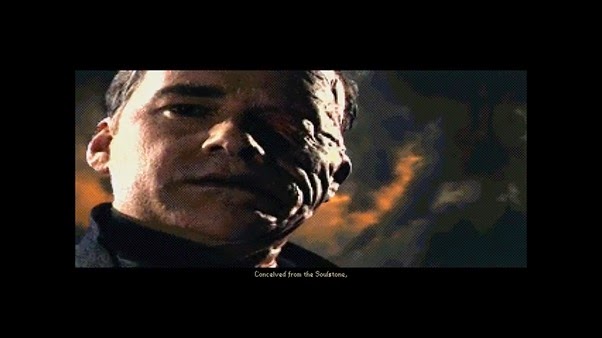 Now we get to the big failing of Realms of the Haunting-The ending! All that complex story, and religious themes and symbolism? It's all abruptly thrown out the window for a cop-out 'He was insane all along' ending! It's absolutely maddening! You're following this compelling story, then the writer clearly just stopped caring, and after a cop-out climax where Adam does nothing of note (other characters like Aelf and Hawk do all the hard stuff, while Adam just stands around), then as the mansion is being disintegrated by energy, you rush to escape, and then, just as your have to pause for your heart to leap back down into your chest, we suddenly see that Adam is really a patient in a mental asylum. Nothing in the game actually happened. All those great character moments, particularly the touching farewell with his ghostly father were all a delusion and meant nothing. And no, the asylum doctor isn't Belial, because 1, people like Hawk, Aelf, Abaddon, Rebecca, etc. would've noticed if he survived, 2, if Belial survives, that paints the protagonists as ineffectual, and, most importantly, 3, if Belial is really alive, that makes the story's events rather moot, and would fill you with the feeling that little was accomplished from a character standpoint.

Onto some more positives, Realms of the Haunting is pretty interesting in its portrayal of demons. Belial is regular evil (though he's not a real demon, but rather a shade borne from Florentine's evil power), but the majority of demons we come across aren't bad at all, but rather neutral. They have zero interest in good or evil, instead concerning themselves with keeping the universe's balance in check. 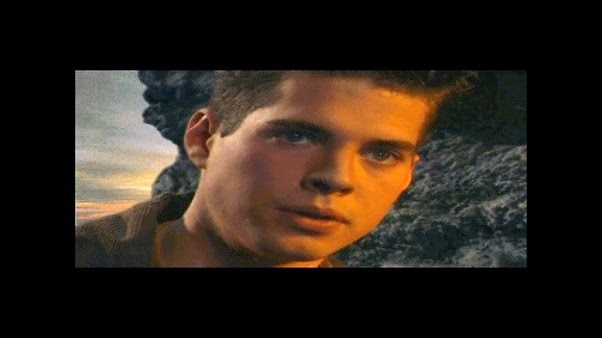 The villains here are decent, and certainly very varied, but lacking. They don't appear as much as they should have, nor do they do as much as either. Belial is the best, but unfortunately he gets a real Bond villain level of cliched stupidity when he leaves Adam's all-powerful objects lying on a random table after the two leads are captured. Because of this, when they escape, Adam instantly reclaims what he needs to save the world. Finally, Belial is killed really easily and with zero fanfare. There's no cutscene or real death animation at all! His pixelled game sprite falls down without a noise, and that's it!

The heroes are mixed. Adam is a decent protagonist, but he's not all that enthralling, due to his pretty milquetoast attitude. As for Rebecca, she's likeable, but not fleshed out enough, and her character really suffers because of this. Her backstory is very interesting, but aside from the bare basics, we know nothing, despite how important a plot point it is!

Aelf is a very good spirit guide! The scene in the church where he returns is great, as he gives Adam a very cryptic riddle...and actually stays for Adam to decipher it, then explains what he means once Adam realizes the meaning of his words. That's certainly a lot more accommodating than most characters of this type in fiction! Most just give the hero a really cryptic riddle, then bugger off! Faring less well is Raphael. He's a likeable enough character, and Hawk the angel even says that Adam can trust him like a brother...which is rather a moot point, since Raphael only has one scene in the entire game, and it's already happened by that point! 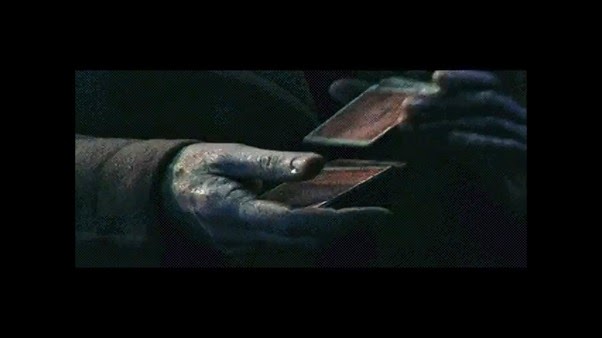 The acting in realms of the Haunting is very good! Like I said above, David Tuomi is a bit milquetoast as the everyman protagonist, while Emma Powell is very likeable, and a great sidekick. Marc Finn is decent, albeit a bit too Snidely Whiplash villainous, and Kim Durham is wasted as Gaul. Now, onto Belial actor David Learner. Say, did you ever watch Knightmare? Do you remember Pickle? Well, this game manages to make him an intimidating villain! I'm not kidding! Pickle here is a creepy dude who wears gloves made from human skin! Dave Roberts does quite well with his double performances as Aelf and Raphael. The rest of the acting is all-round decent.

Now, let's get to the effects. This is hard to gauge, as if Realms of the Haunting were a movie, I'd trash it on these grounds. However, it's a video game, so it's only natural that there are green screens, and really obvious CGI, because the actors have to mix with the game world. The overall picture quality is great for an FMV game!...Which is to say it's only just passable as a movie. It's not bad, but just a teensy bit low resolution. There's a honeycomb effect, but you'll completely cease to notice it due to the story and actors drawing you right in. 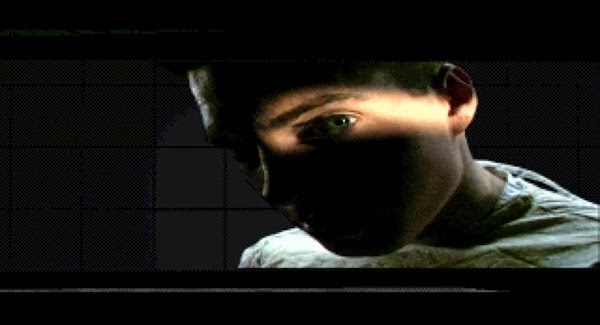 One thing that Realms of the Haunting excels at in moments is the imagery. Some moments look fantastic, like when you step through the Mausoleum portal, and you arrives in an eerily green-lit church, with choir/orchestral music playing as you come inside and see this slimy, marked location.

Finally, the soundtrack. It's pretty decent. Nothing special, but it's mildly atmospheric here and there.

I highly recommend Realms of the Haunting. It's available cheaply on GOG.com, and worth every penny! It'll piss you off something fierce with its mazes, moon logic puzzles, and the dreadful ending, but it still stands out as a highly original game within a pretty cliched genre, and that really counts for something!...
Posted by Chris Hewson at 9:04 AM