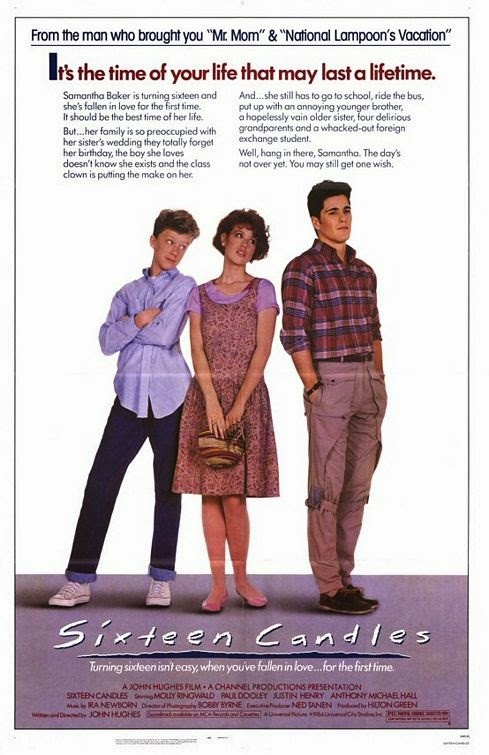 John Hughes is regarded as a master filmmaker when it comes to teen coming-of-age movies, from Ferris Bueller's Day Off, to The Breakfast Club, Pretty in Pink, Some Kind of Wonderful, and some simply entertaining fare like Weird Science. Hughes didn't hit perfectly with every one of his main movies though, such as tonight's movie Sixteen Candles...

It's Samantha Baker's sixteenth birthday, and she's both timid and excited about it, but unfortunately her entire family has forgotten all about the occasion in the bustle of her sister's upcoming wedding. Infuriated, Sam seethes through school, then goes to the prom dance later that night. At numerous points, she bumps into her crush, Jake Ryan, who she doesn't know reciprocates her feelings, and as she sadly makes her way back home, Jake enlists the aid of skeezy geek Ted to find out more about Sam... 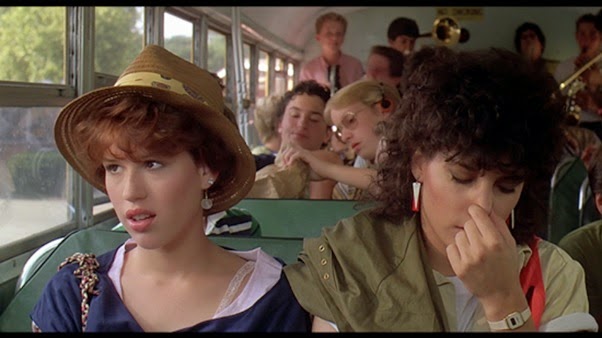 Sixteen Candles is an almost mature teen movie, minus certain scenes and elements that drag it down, such as some property destruction humour, and occasional jokes that miss the mark. The plot is well-written, and while it is rather simple, that's not so much a problem come the end. The story feels like it's progressed naturally, rather than being thin.

What's almost a big problem with this movie is how little the two romantic leads interact. Thankfully, this is the point, and it actually works in the movie's favour, and Molly Ringwald and Michael Schoeffling still manage to share chemistry in their final scenes together. What is a problem, however, is how little screentime the character of Jake gets in the first half of the movie. Unfortunately the movie compensates for this in the worst possible way, by giving him plenty of screentime in the second half, while Molly Ringwald barely appears! Aside from a big scene with her father, she's absent from her own movie for like forty minutes! *sigh* At least getting plenty of scenes with Jake is still] an upside to this. 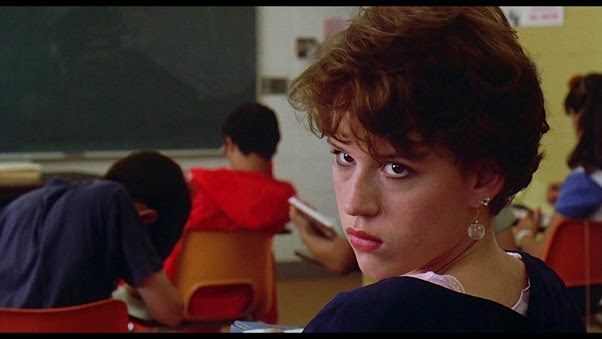 The characters in Sixteen Candles are very good! Sam is a nicely developed lead, with a well-done arc, which never focuses on one thing too long (for example, her parents forgetting her birthday is a big deal at first, but as the movie goes on, it becomes deliberately less important). Likewise, Jake too is a likeable lead. Ted* is a tiny bit annoying at first, but gets better as the film progresses, which is much appreciated considering he and Jake dominate the film for a good chunk. Jake's girlfriend/ex Caroline starts off as kinda bitchy, but becomes genuinely nice come the end. The minor characters are all entertaining enough, save for quirky foreign exchange student Long Duk Dong, who feels like a rather superfluous addition to the film. One character I felt was wasted was Sam's bestie, who appears quite a bit, then vanishes about halfway through.

*By the way, what is it with unnamed characters in movies actually having names? This movie's opening and ending credits refer to Ted only as The Geek, but he's referred to by name repeatedly! The same thing was the case with the Man With No Name movies! He's named in all bloody three of 'em! 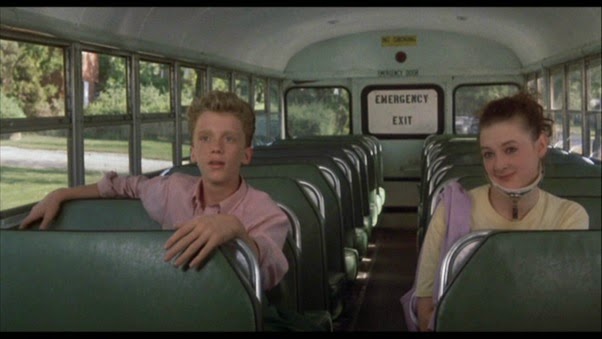 Now onto some more problems with Sixteen Candles-It's ten kinds of creepy! First, there's the blatantly disablist humour (which is thankfully phased out as the movie goes on), and a couple of derogatory uses of 'fag/faggot', the first of which is extremely dated but relatively harmlessly used unfortunate '80's vernacular, while the second is more unpleasant. Then there's Long Duk Dong, who is pretty damn stereotypical! Thankfully he's certainly not a racist character, as while he is presented as a big joke, he's not being laughed at, but laughed with, and he's on top! He's popular, gets the super hot busty girl, and has a great time! He's a caricature, but he's a caricature that isn't presented negatively. Finally, there's an unfortunately worded comment from Jake in one scene. I think the intent is that he says he could go and wake his tipsy girlfriend up from her stupor and have sex if he wanted to (which he doesn't, as he doesn't like her as a girlfriend anymore), but the way the line is worded makes it sound like he's not going to bother waking her up to do this! It sounds like he's totally fine with date rape! Jesus, and I thought Home Alone 3 was John Hughes' low point as a writer!

Ok, back to the positives. The acting in Sixteen Candles is very good! First of all, a lot of the lead actresses/actors not only look their age, but actually are! That's pretty rare for any movie about teenagers, where they're almost always played by 20-to-30 year olds. Molly Ringwald is a great actress here, and looks very natural and regular, rather than a supermodel, which is very refreshing for a movie like this. Anthony Michael Hall is decent here, and I really find him to be a versatile actor. He's a skeezy comic relief geek here, he plays a much more serious character in The Breakfast Club to great effect, and MANY years later, he played a great psychopathic villain in Warehouse 13! I don't like him as much as Andrew McCarthy, but he's still pretty great!The rest of the acting ranges from good to decent. There's also an extended cameo from Zelda Rubinstein, for what that's worth (a lot to some. *wink*, Emily). 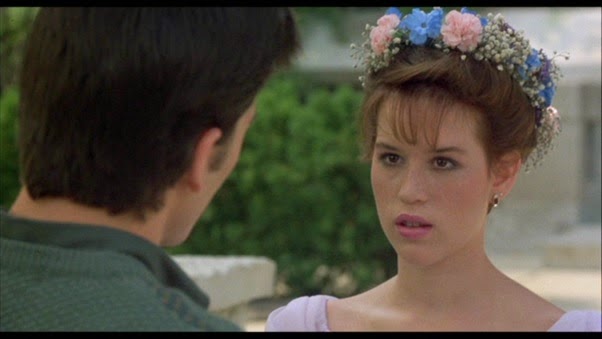 Finally, the soundtrack to Sixteen Candles is great! While that Spandau Ballet song is an insanely cliched scoring choice for teen films-especially pertaining to proms-nowadays, but that doesn't mean it's not a good song anymore. The rest of the score complements the movie very well! My favourite by far is the song that plays during the ending!

Sixteen Candles is a very mixed bag! It's not a masterpiece like other John Hughes movies, and it has its lulls, and its more than awkward moments, but it's still quite a good teen movie, with fine acting, and some really great scenes! You don't have to watch it to get the full '80's teen' experience, but it's certainly there if you want to...
Posted by Chris Hewson at 8:52 AM