Devil Dog: The Hound of Hell (1978) [The Deadly Doll's House of Horror Nonsense's The Shortening] 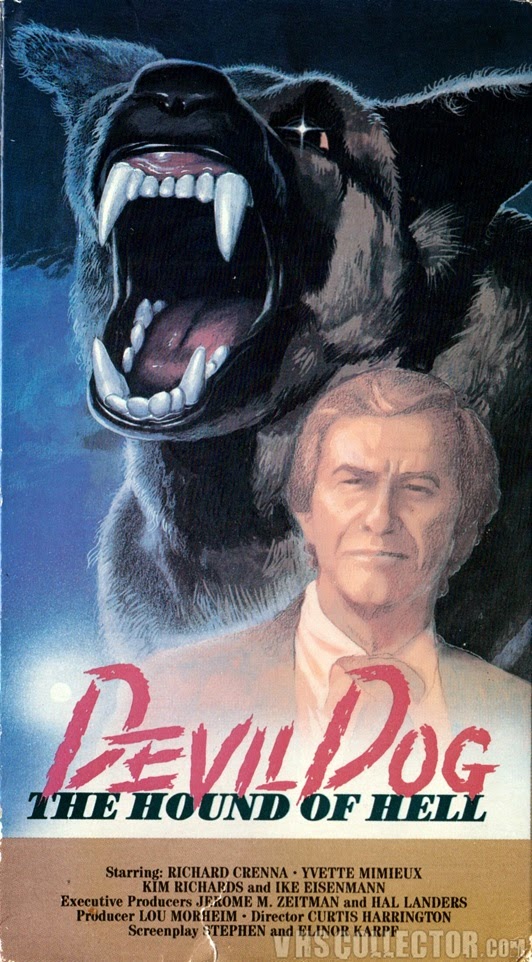 Tragedy strikes the Barry family when their beloved pet dog is found killed. They quickly find a new one though, and despite not wanting another dog, the children grow quite attached to their new pup Lucky. Unfortunately, the old man who gave Lucky to them had evil ulterior motives. The dog is part of a brood from a lady dog who was demonically possessed thanks to the influence of a Satanist cult. The family is soon possessed by the dog's malevolence, save for the father, who tries to uncover what's become of his family, and how to stop this hellspawn creature that is his dog Lucky... 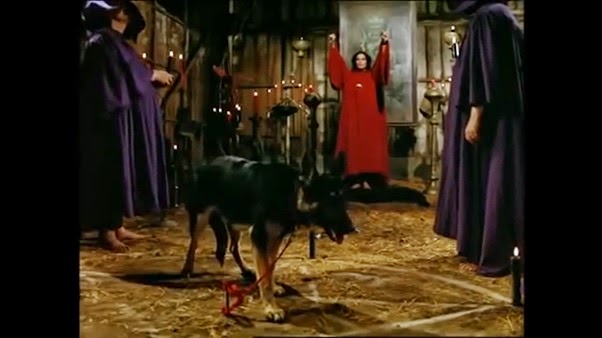 Devil Dog: The Hound of Hell is never a bad movie, but at about the halfway point, you do start to wish the film focused more on the evil satanists and their dastardly plotting, rather than exclusively the beleaguered family. Thankfully, shortly after, the movie picks up. It still doesn't show the original villains at all, but we follow Richard Crenna as he finally knows what he's looking for.

This movie's story is a slow, but decent one. Its pacing is good, and when the plot really picked up, it's quite an interesting tale! It's also just plain entertaining to watch Colonel Trautman fight the doggy forces of Satan with hand magic! 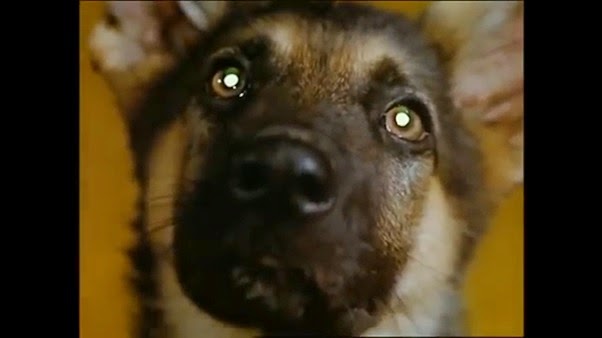 There are no proper villains in this movie overall, and it relies totally on the atmosphere and story to get by. The only non-dog antagonists we get appear just in the film's prologue, and their motivations besides "HAIL SATAN! HAHAHAHAHAHA!!" are unclear.

The atmosphere and tone to Devil Dog are both well-handled, and some scenes are really good, such as the lawnmower scene, which may make you wince. The direction is all round pretty darn good, which is to be expected for a Curtis Harrington production. 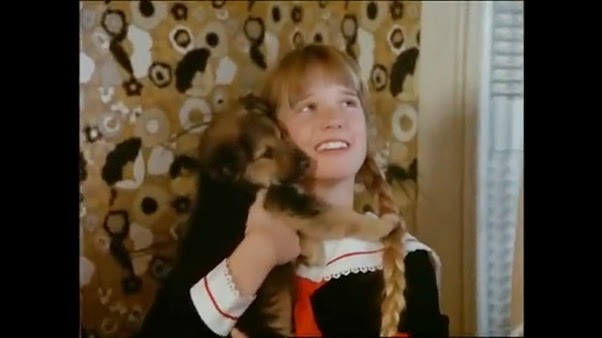 Onto the cast. The two lead parents in this film lose all sympathy points when they say to their distraught daughter the old "It's ok, we'll get you another dog" line. BRING ON THE CARNAGE! RIP THEIR INTESTINES OUT AND STRANGLE THE FOOLS WITH THEM!

Joking aside, they're likeable enough characters, until the whole family minus the father become dicks a third into the movie, thanks to the evil dog's possession. From then on, Crenna becomes the lead. 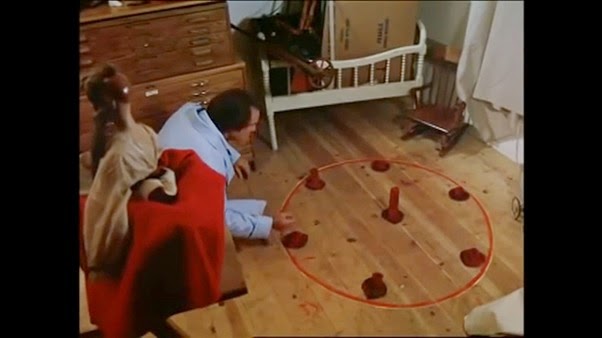 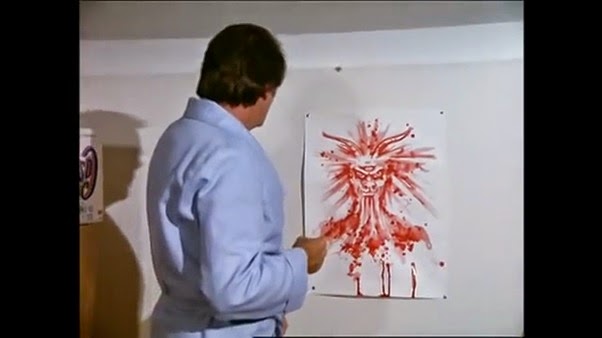 At first, I thought the family's wise Latino housekeeper Maria would be the movie's protagonist, as Curtis Harrington's niche was making films centreing on middle aged women. However, that's not the case, as Maria is the movie's first victim. Good riddance, I say. If a character is too dumb to extinguish a small fire on their arm, I have no patience for them.

Onto some problems with Devil Dog. There's one briefly confusing moment with and extremely abrupt time cut of a year! This is especially jarring since Lucky the dog goes from being a pup to suddenly a fully grown Inspector Rex!

There is always one problem to any devil dog movie that can rarely be overcome-Dogs are happy. They're always adorably panting and smiling, so trying to say that this dog in particular is really akin to Baphomet, Lord of Darkness, is a REAL stretch! 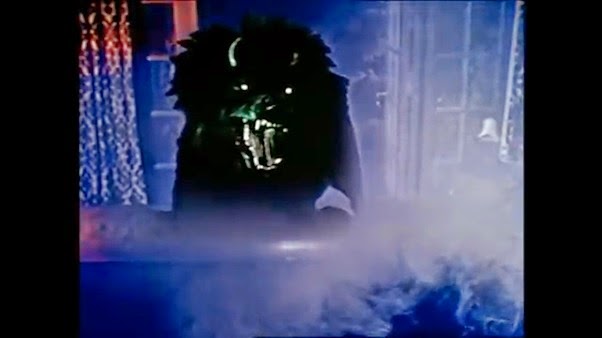 The effects here are decent in places, whereas the devil dog's occasionally seen true form is pretty humorous. Not Night of the Lepus laughable, but still hard to take too seriously, particularly thanks to the poor green screen work. There's another scene where Crenna tries shooting the dog, and the movie pulls a lazy Manos, the Hands of Fate effect (albeit with no blurring) by showing the dog's invincibility simply by not showing the bullets firing at all, even though they are. There's also an amusing 70's aesthetic on display here in parts, with Satanic cultists wearing aviator sunglasses with their ooky robes.

The acting is Devil Dog is decent, with Richard Crenna making a fine lead. He's no Colonel Trautman here, but still a very good actor. The family do good jobs at dual personalities, with the best being Yvette Mimieux. Martine Beswick (Dr. Jekyll and Sister Hyde) has an extended cameo at the beginning, but never appears again, unfortunately. 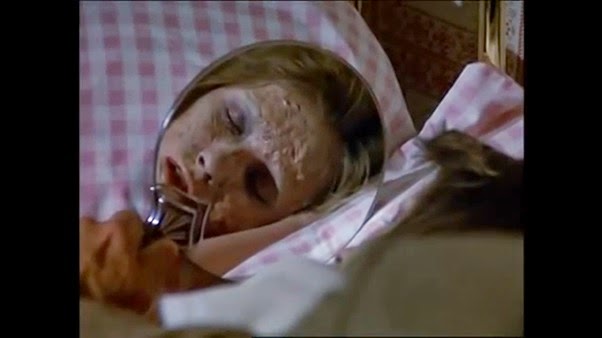 Another plus I can give to this decent horror flick is that is has a (relatively) happy ending, and thank God, it doesn't end with that goddamned "Everything's safe...BUT IS IT?! There's one more evil dog left, and it looks at the camera! DUN DUN DUN!" cliche! I am so unbelievably sick of movies of this type ending like that!...

This post is for The Shortening, a blogathon set up by Emily of  The Deadly Dolls House of Horror Nonsense.
Posted by Chris Hewson at 7:51 AM