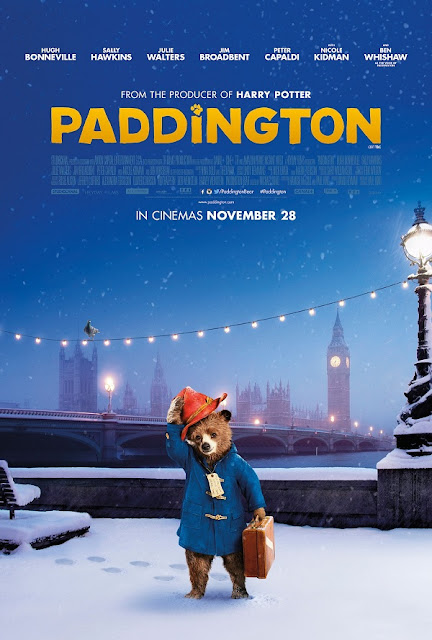 Paddington is a bear living in the jungles of Darkest Peru, with his aunt and uncle. All speak fluent English and are 'up to date' with all the British lingo and customs due to the influence of an explorer who visited many decades ago, leaving records and books behind, as well as instructions on how to make marmalade. After a disaster that destroys his home, Paddington is sent to live in England, to go find the explorer. He has no luck, but does find the Brown family, who reluctantly accept him until he finds a real home... 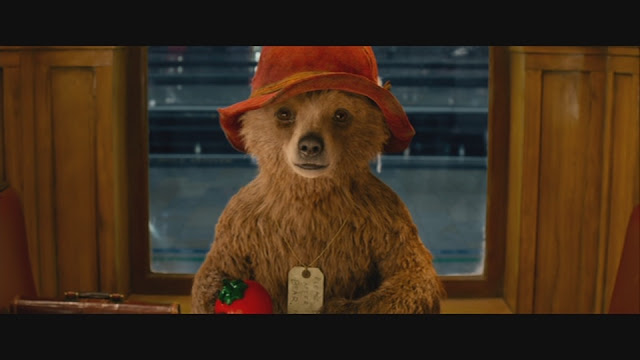 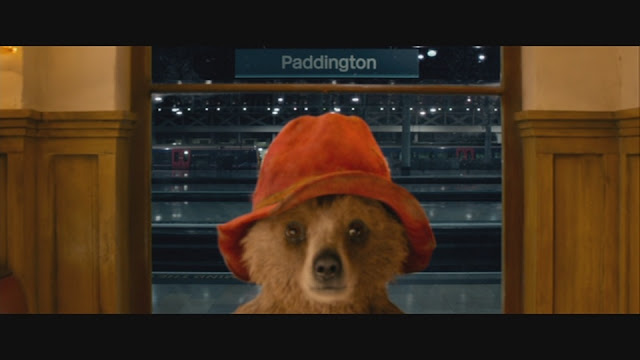 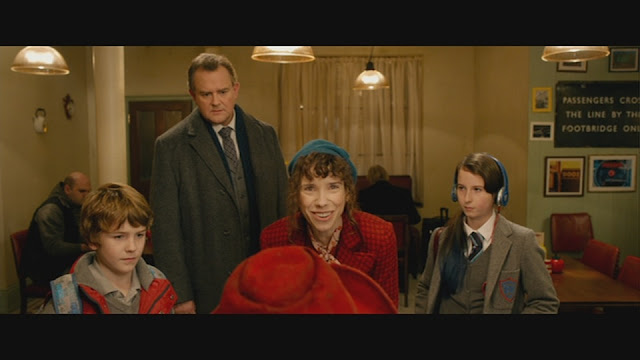 Based on a classic series of childrens' books from post-war Britain, Paddington is about the adventures of the famous talking bear, updated to the modern world, but also staying true to the classical.

This is an engaging movie from the start, with an exotic and heartbreaking intro, to a great shift when we come to drab and rainy old London, where Paddington quickly meets the Brown family, with all their idiosyncrasies. The story hits all the expected beats, but it's a nice watch regardless, and has enough unique traits to stand out. What's especially nice is the film's message of tolerance to immigrants. 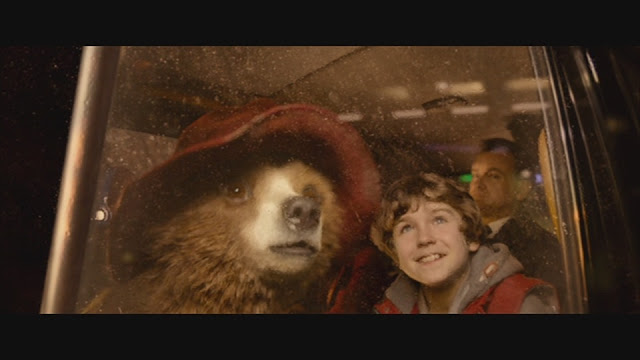 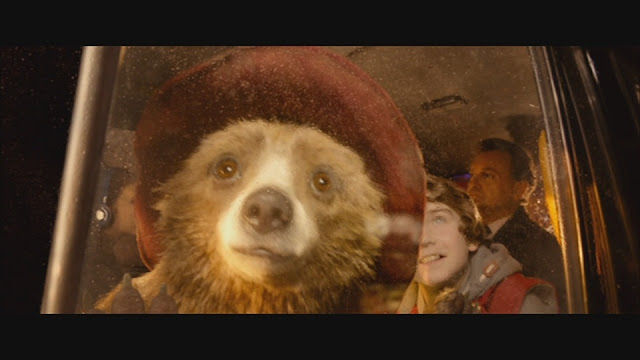 Paddington is a very funny film. A mix of great dialogue, slapstick, and amusing concepts. It's all bound to bring a smile to your face. Some of my favourite jokes included speaking bear (RRAGGHHHH), the flashback to Mr. Brown's youth,  Paddington's hard stare, and the chase scene, which was a real highlight!

Not all the humour works though, I felt. The destruction comedy was groanworthy to me, and the stuff with the toothbrushes was just cringy! These actually made me stop watching the first time! Luckily I gave it another chance. I also wasn't a fan of the whole 'attack on the house' section, where naturally tons of stuff gets destroyed, and no-one believes what Paddington has to say. 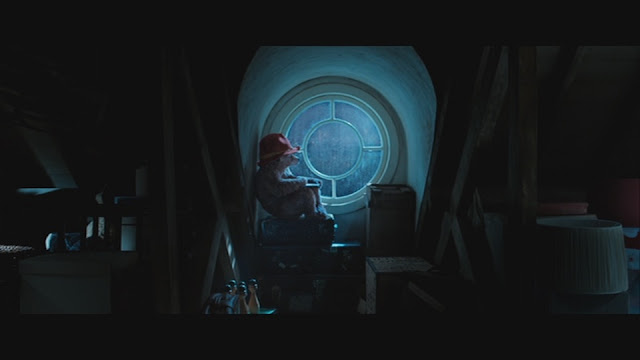 Some great examples of the dialogue are:
"Marmalade. One sandwich contains all the vitamins and minerals a growing bear needs for the whole day."
"Hello, this is Henry Brown...I'd just like to add something to my home insurance policy. Well what it is is we have a guest for the night, a bear, and I just need some extra cover for any damage...Yes, a bear. No, a real one. About 3 foot 6. Grizzly? Not particularly. Mind you, I haven't seen him in the mornings."
"You must get a lot of strange customers in here"-Cabbie: "Oh, you don't know the half of it, love. I've had bishops, magicians, bears, contortionists."-"Did you say bears?"-"Yeah. Had one in here last night actually."
Paddington: "Doesn't it rain enough in this city without having showers in the house?" 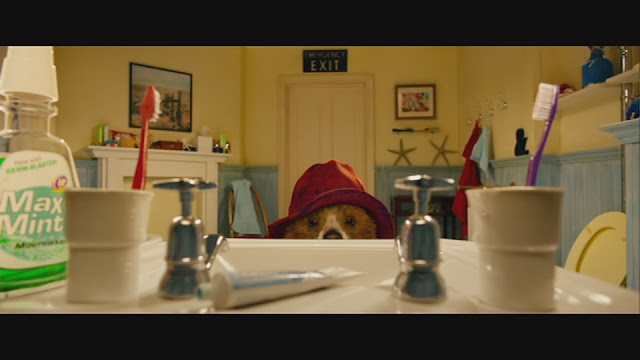 The tone of Paddington is interesting! Like I said, it's definitely set in the modern day, but there are flourishes that are out-of-time. I appreciate this so much! Most movies feel as if taking place in modern day means taking place in the real world, where everything is boring and nothing weird ever happens. But here the weird is normal (or vice versa)! Like how casually everyone treats the idea of a talking bear, or the mentions of Darkest Peru, and the whole chase sequence. Who knew The British police were so dedicated to their ursine officers! 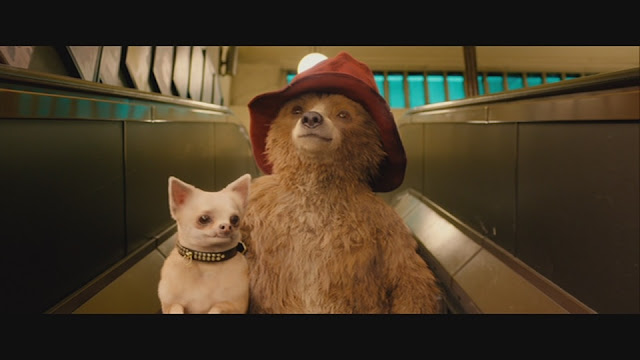 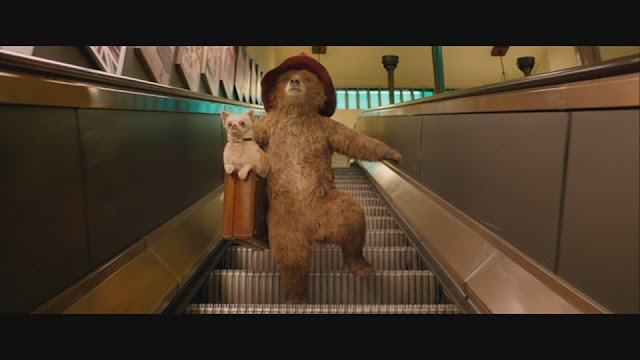 Paddington is a lovable protagonist, kind and trusting to a fault, but not naive. Mary Brown is the more freeflowing parent while Henry is more strict, but not terribly so, and you never get really frustrated with him. The kids are your typical 'too cool for school' bunch, but quickly emerge as likeable, and are great to watch once they appreciate Paddington/their new guest. Mrs. Bird is both sagelike and mischievous, and can drink anyone under the table. Her gift as a Scots! And the villain here is very effective. She nails a good balance between just creepy enough to be threatening, but not so much that it makes the movie uncomfortable. 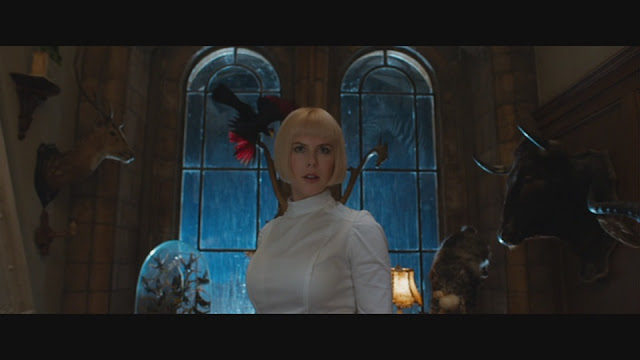 The acting here is perfect. Ben Wishaw makes for a sweet Paddington, while Hugh Bonneville and Sally Hawkins are distinct as the parents, and Madeleine Harris and Samuel Joslin are fun in different ways as the kids. Julie Walters. Peter Capaldi is amusing as the grumpy Mr. Curry. He's a grumpy old man, mistrustful of foreigners (but never going overboard and taking you out of the movie), and he's endearing when he realises the extent of the villain's plans and seeks to help Paddington. Particularly funny is Matt Lucas in his small but hilarious role as a taxi driver. And lastly, Nicole Kidman is an unexpected presence, but fits very well, delivering a deliciously evil performance.

The music here is very nice. A lot of it is nice Calypso/Caribbean style tunes, which fit well with the London aesthetic, ans with the message of the story.

Given that the main character is a digital creation, it would have been very easy for this film to look unconvincing, laughably bad, or just plain unnerving! Thankfully it's none of those, and Paddington looks great. The filmmakers are even so confident n their animation that they freely have close-ups on his face, and none show any flaws. 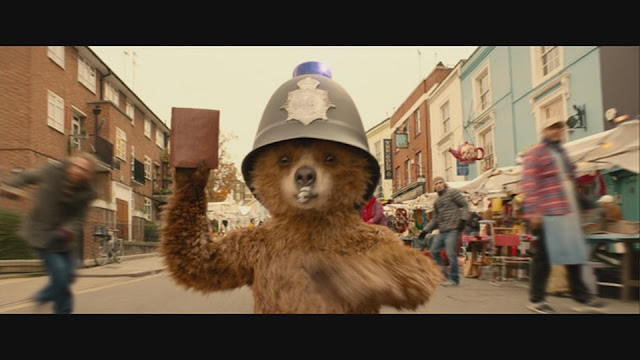 Paddington is a fantastic film, and proof that while many modern day movies might not be two great shakes, some classics are still being produced, without a doubt...
Posted by Chris Hewson at 8:46 PM