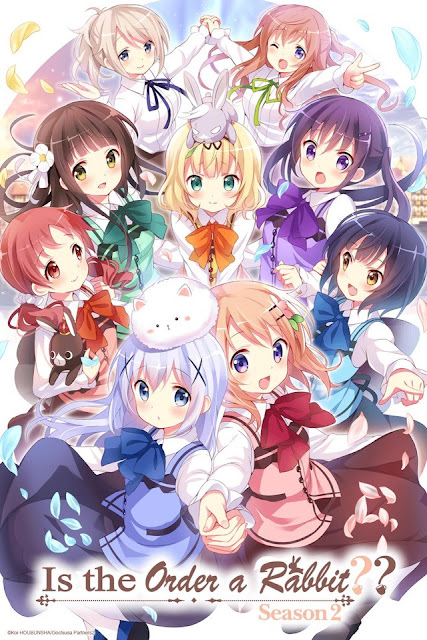 I've always been a casual fan of anime, and watched dutifully through all 10,000 hours of Dragonball Z like everyone else my age, and while it's not something I religiously watch every single day like clockwork, I do still enjoy revisiting old classics, or finding fun new shows to watch. A favourite over the past few years has been the wonderful Is the Order a Rabbit!... 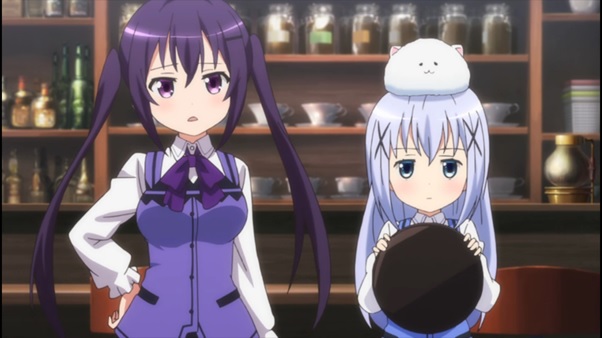 Fresh-faced teenager Cocoa has just arrived in a sleepy pastoral village. She soon stumbles upon the coffee den Rabbit House, where she meets the shy Chino, and her fluffy rabbit Tippy. Cocoa quickly proves herself to be an exasperating presence to the straightlaced girl, but it seems she'll have to get used to her, since it turns out this is the very household Cocoa has been sent to stay. Cocoa is hired as a new barista, and gets to know everyone at the bar, including the older Rize. Together they make new friends, meet old rivals, try and liven the cafe up with all kinds of ideas, and generally strive to have a good time...

Is the Order a Rabbit is a slice-of-life anime all about life in a coffee shop. The stories are varied, and always entertaining, never feeling stale.

A defining feature to this show is the cute-factor. Everyone here is just so adorable! It's enough to make the most hard-hearted man curl into a ball out of joy. 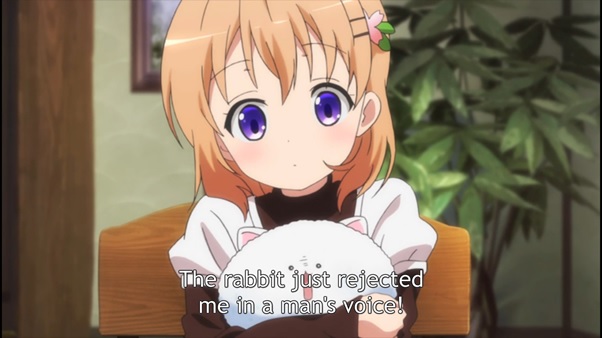 The comedy here always lands, and is often very funny, hysterically so at times. The jokes and situations come fast, and punchlines land perfectly, with just the right amount of build-up, or sometimes coming out of nowhere in a hilarious way. There are sometimes semi-meta jokes, but these are few and far between, and never feel too forced or unsubtle.

The episodes are structured in a specific way, with two separate plots, but sometimes with linking elements or themes. Each episode is pretty self contained in their own right, but they build on each-other, and some story or character arcs continue over a few episodes, such as Syaro's accidental deception, or Chino coming out of her shell. There's a nice sense of continuity here. Enough changes so that it never feels static, while not so much that you're left in the dust after every ep. 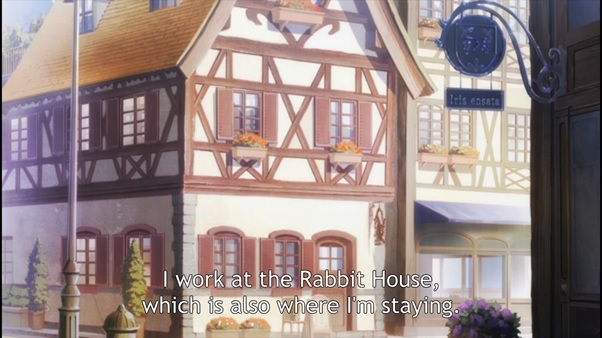 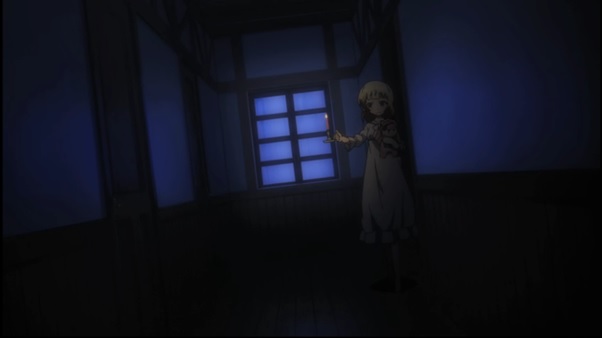 The characters are a highlight to this show. There's just the right amount, and each are distinct from the other, providing laughs in different ways, and each having their own personalities and development. There are a total of five main characters, with around four supporting characters (and Tippy!). This sounds like a lot to take in, and it might've been if they were all introduced in the one clump, but the show's smart enough to introduce everyone gradually. The first episode shows us the main trio, the next couple introduce Chiya and Syaro, and successive episodes build on this further.

Cocoa is hyper and overemotional without being obnoxious about it, and it's funny seeing her crazy over/underreactions to things, as well as her generally bizarre outlook on life. Chino is the youngest of the group, and a wallflower, but also the most mature, and has little tolerance for Cocoa's antics...or at least, outwardly. It's sweet watching their sisterly relationship grow. 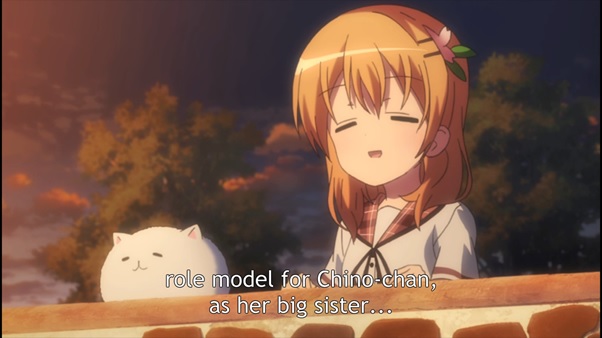 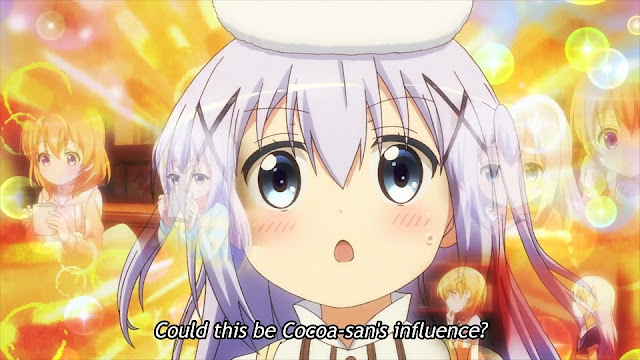 Rize is a military buff, who can spar with the best of them and shoot a clay pigeon from 100 miles away.While she enjoys all of this, it has given her a little bit of a complex when it comes to trying to be a normal girl.

All-knowing and wise in some areas, and hopeless in others, Chiya is sweet, and her habit of coming up with ridiculously poetic names for her cafe's menu is hilarious. Syaro meanwhile is probably the most awkward of the group, with a crush on Rize, a debilitating fear of rabbits, and an embarrassing  secret. She's poor, and is constantly pinching pennies, but due to a mistaken assumption, the other girls (bar her neighbour Chiya) all believe she's rich. 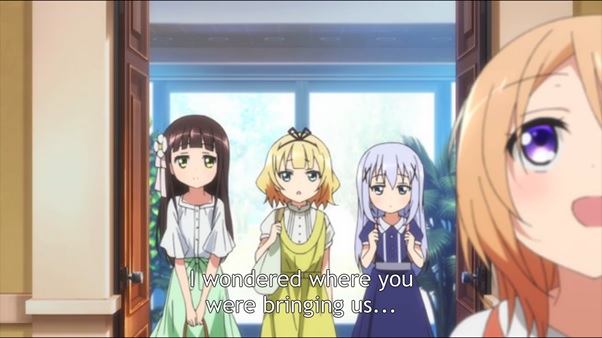 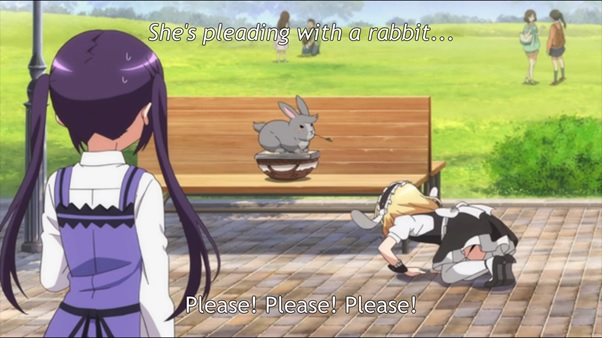 Always mistaken for ventriloquism by the other girls, Tippy is a grumpy but goodhearted presence, quick to yell and criticise, but also there to  help out too, and is consistently adorable. He may not look like a real rabbit, but he sure has the heart of one!

Other characters are Chino's schoolfriends Maya and Megu, who are eager balls of excitement, in contrast to their more quiet friend. With their spontaneous ideas, helpful psychic connection, and cute cat speak, they're a likeable presence, and never overdo it. Then there's Aoyama Blue Mountain, the eccentric (and possible perverted) novelist who often roams around the town waiting for good moments to dispense wisdom. Some of it is helpful, while some is just bewildering. Chino's father usually only makes small appearances, often as bookends, but makes them count, and he feels like a lived-in member of the cast. 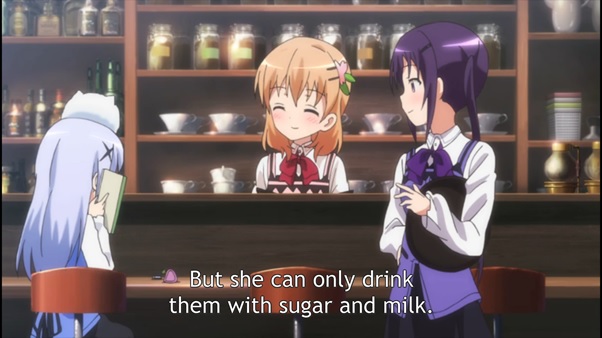 There's not a great deal of fanservice in this show, but it's certainly there, mainly in the episode taking place at a spa, which feels like an excuse to dress everyone up in as little as possible. On my first watch I was like "Are you for serious with this?" because of how overt it gets, but then I realised that's the joke. It's never egregious enough to be outright creepy or annoying, and works well as parody of this sort of thing.

The titles to each episode are insanely long, as is common for Japanese TV. Examples include 'Remember the Last Time you Went Camping? You Tried Lighting a Fire in Your Own Home, Didn't You', or The Girl Dons a Red Coat and Drives a Team of Rabbits Across the Christmas Eve Night Sky. See? Some are less unwieldy than others, and most are fun. The title cards are a nice little visual treat too, even if they pop up at incredibly random and belated times. 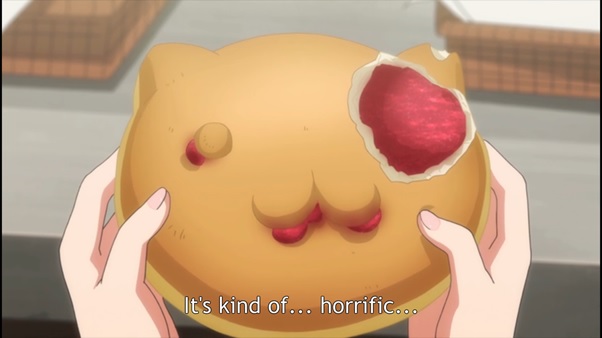 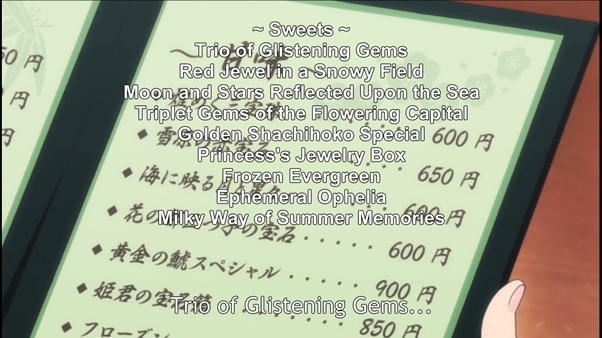 Each episode ends with an illustrated bumper. Sometimes they're a little at odds with the show itself with their occasionally almost sexy approach, but most of the time they're just cute.

The acting here is great! Each actress sounds unique, and brings something different to their role. The main performers are Ayane Sakura, Inori Minase. Risa Taneda, Satomi Sato, and Maaya Uchida. They're each stalwarts of the industry, and do fantastic jobs wherever they go, and even pull double duty and sing the theme songs! It says a lot about them that they manage to each sound different, when anime girls can often blend together in a sea of identical vocals. The rest of the actors all do well, and there's not a bad performance in the bunch. 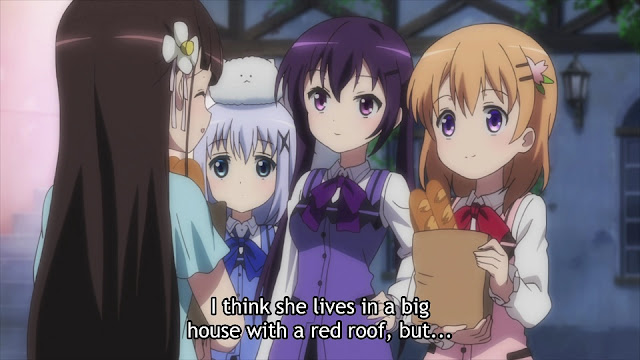 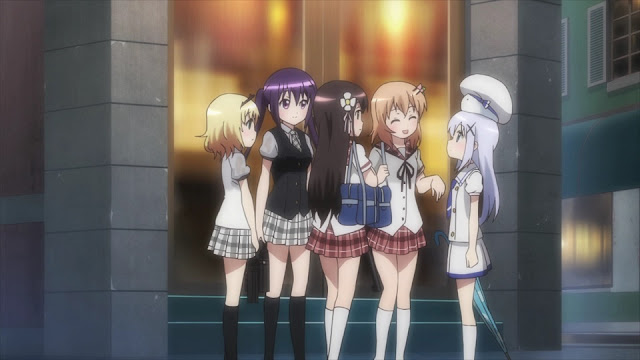 The music in Is the Order a Rabbit is lovely. We get lots of nice little tunes and leitmotifs, and a wonderfully enjoyable pair of intro and ending themes. The Christmas episode has some festive rescorings, and the season final's ending has a new song playing over the credits, which caps off the show wonderfully.

Is the Order a Rabbit will always be a favourite of mine. If you're looking to get into anime, this is a great place to start, and even if you're not into it on the whole, this is still worth checking out. If this is the only anime you see in your life, it'll be worthwhile. 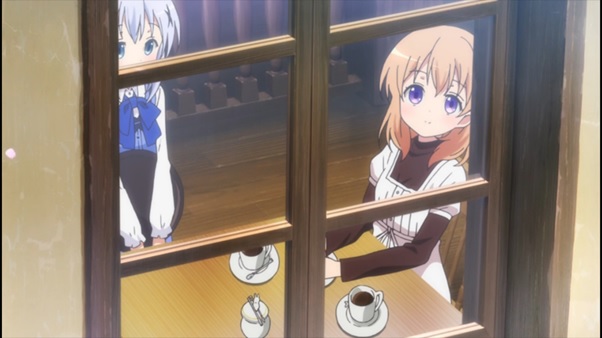 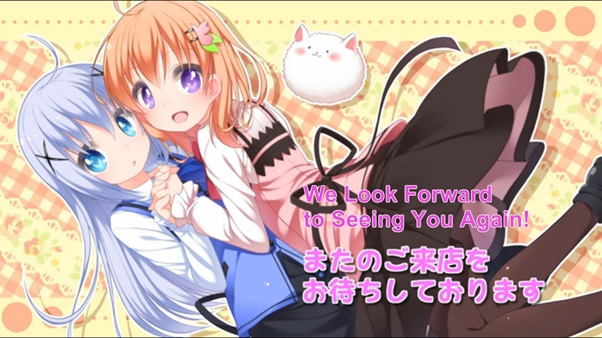