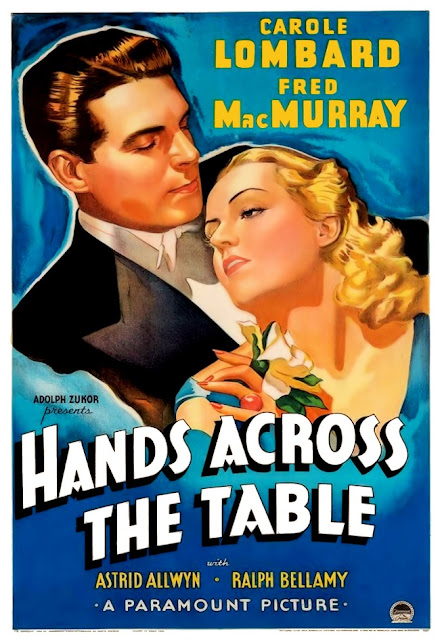 Regi Allen is a manicurist who's intent on finding herself a nice rich man to marry. After seeing what happened to her mother, she has no intention of falling in love, nor with scrounging for pennies until she dies. She confides these feelings with a new client and friend, disabled pilot Allen Macklyn, who sits back and wonders when she'll be proven wrong. Regi soon finds her 'target' in the form of Ted Drew III, a famous playboy from a prominent family. However, it's only after she's fallen in love that she realises he's just as broke as she is... 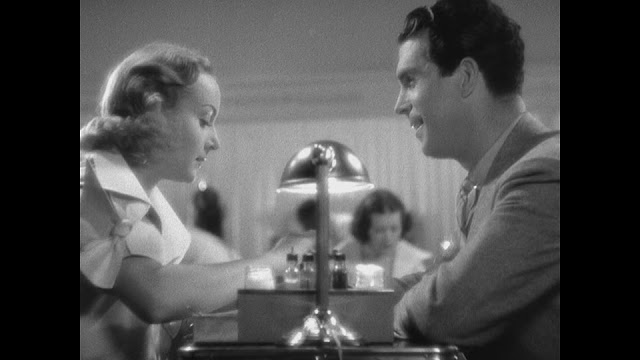 Hands Across the Table is a sweet romantic comedy with plenty of fun to it. The first of Carole Lombard's pairings with Fred MacMurray,

The story is an amusing enough one, with an interesting cast, lots of funny moments, and plenty of varied locations.

Regi is a likeable enough lead. Her plans aren't very nice, but even if you don't agree with them, hre motivation makes sense, and means she's not just a bitch. Ted meanwhile is a perfect mix. He's enough of a rogue to be charming, and always funny, but/and never overdoes it to the point of being obnoxious. His being a bit of a jokester/goofball is actually never a hindrance in the relationship, after that first game of apartment hopscotch

Something else I like is that the movie doesn't show Ted as a wizened man because of losing his money. Not that there's anything wrong with such a portrayal, as it's perfectly acceptable and worked wonders in pictures like My Man Godfrey, but it's always nice seeing something different, such as a poor rich man who' still just as [affluent] as he was before. There's plenty of comedy material there! 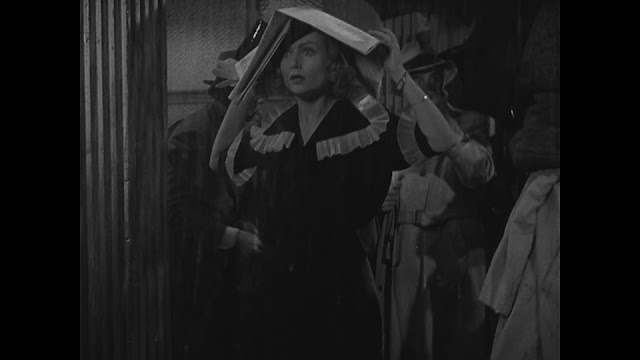 The two share lots of chemistry, and you really believe their feelings for each-other. My only complaint is that I wish there were more scenarios with this couple, as they spend the majority of their screentime in the film's midsection in Regi's apartment. All these scenes are good, but I was hoping for a bit more =.

There's a third act break-up in Hands Across the Table, as there always is, but it makes sense here since the couple were never really dating to being with. This whole part of the movie is as down as you'd expect, but never maudlin, and the lighting really effectively reflects the tone.

Regi's wheelchair-bound friend is a nice addition to the cast. For a while I thought the film might go in a love triangle direction, but it never really does. He's in love with Regi, but it's unreciprocated. On one hand, it's a shame that they don't get together, since they'd make a nice couple, and it'd be interesting seeing such a relationship in a 1930s picture. But on the other hand, it's a nice change seeing a man and woman in a 1930s film just being friends, as well as seeing a younger man mentoring a woman  It's nice showing that it isn't just/only older men who can be wise. Young men can too! They're not all interested in sex!...Most are, but not all!

Regi's other friends are ok, though don't make much of an impression, due to a pretty small amount of screentime. Lastly, there's Ted's fiancee Vivian Snowden. She too only has a small role, but is very cute! Thankfully the movie doesn't make her out to be a bitch just because the main character loves her groom-to-be. She comes across as nice and reasonable. 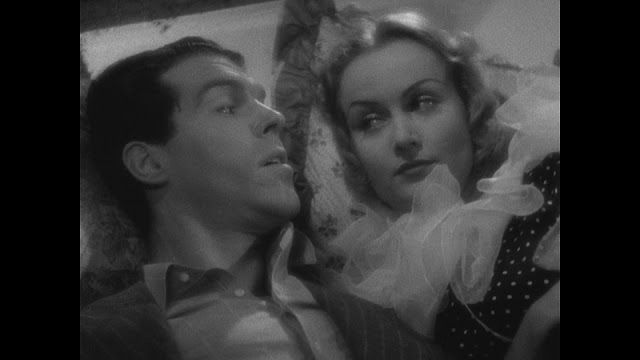 The acting in Hands Across the Table is all very good! Lombard and MacMurray are a great pair in their first outings, and while it reportedly took the two a while to get accustomed to each-other behind the scenes, something must've clicked before too long, otherwise we wouldn't have gotten four movies out of them!

Ralph Bellamy does well as the film's heart. Ruth Donnelly and Marie Prevost do alright in their roles, as does dopey funnyman Edward Gargan.

The most interesting thing about this movie to me is the idea of men getting manicures! Ha! Not that it's a bad idea, certainly. Men should take care of themselves more often, but do they? Never!

Hands Across the Table is another of the best Carole Lombard pictures. A real classic that I thoroughly recommend!
Posted by Chris Hewson at 9:00 PM