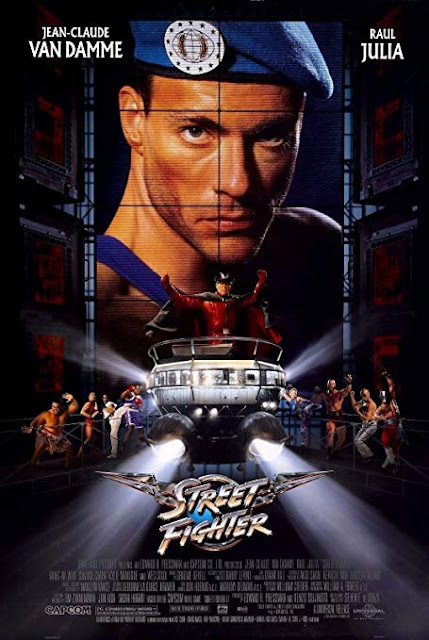 When it comes to bad movies, there is one that stands as one of the most infamous video-game adaptations out there, Street Fighter: The Movie!..And I don't see it. Why do people hate this movie so much? I can't speak for them, but I can definitely explain/ tell you why I simply adore this film... 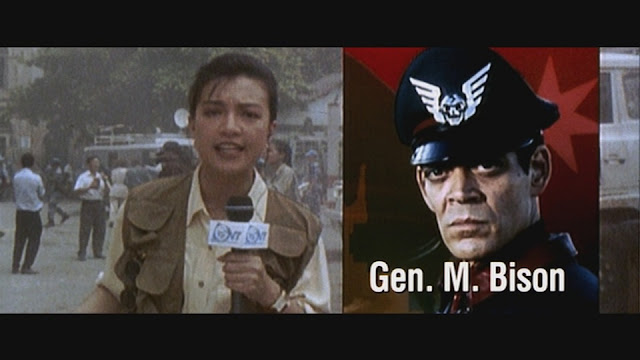 The South East Asian country of Shadaloo has been gripped by war for years due to the machinations of the cruel warlord M. Bison, who desires to first conquer this nation over the opposing A.N. (Allied Nations) forces, then turn his attention to the rest of the world. Leading the A.N. charge is Colonel Guile, but he's not alone in wanting Bison's head, as the news reporter Chun Li has her own ulterior motives. Together, these disparate forces fight against Bison, along with reluctantly involved grifters Ken and Ryu. Will they succeed in foiling the power-mad monster's plans, or will M. Bison succeed in toppling.crushing his enemies and conquering the world?...

Street Fighter is another of my all-time favourite movies. It's one of those flicks I can watch again and again, no matter what, and it never fails to entertain. 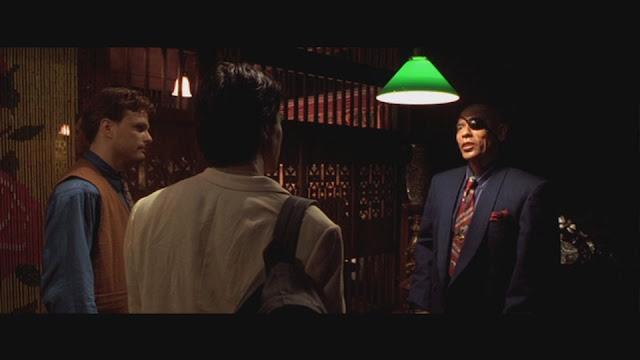 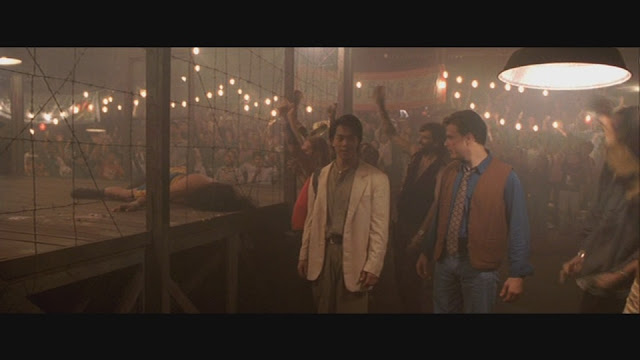 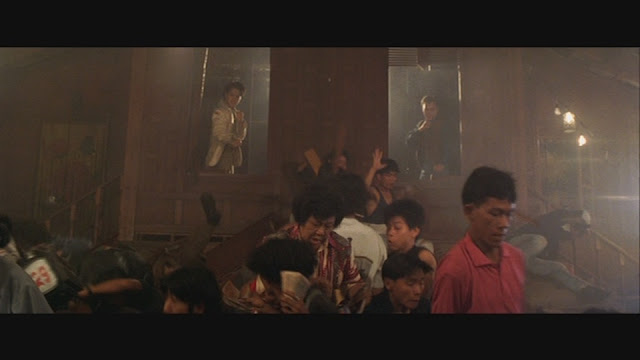 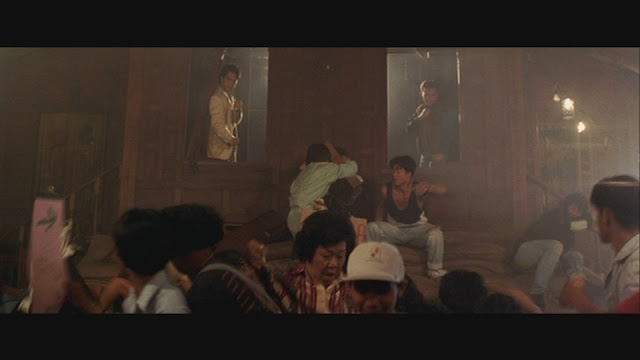 The first two acts aren't hugely fight-heavy, while the final third is all-action. On paper this sounds like a terrible idea, but I find it really works. There's mostly good pacing with the fight scenes we do get, and there's a feeling of gradual effective building up as the story moves along, carried well by the cast and events and ensuring that the affair never becomes boring even if there's not a punch being thrown every minute. As for the climax itself, it's lots of fun, showing everyone's plans coming together and systematically kicking back at Bison's forces just as he thinks victory is in the grip of his hands.

The problem with tournament fighter games that attempt stories is usually the same-It can be tough building a sweeping and epic story around a simple fighting tournament, as you have to have all the action revolve around this one location at a certain specific time. That's why I feel Street Fighter did a good thing by not including a tournament and limiting itself by that, as it gave the film the opportunity to tell its story in a better, broader way without being constrained. 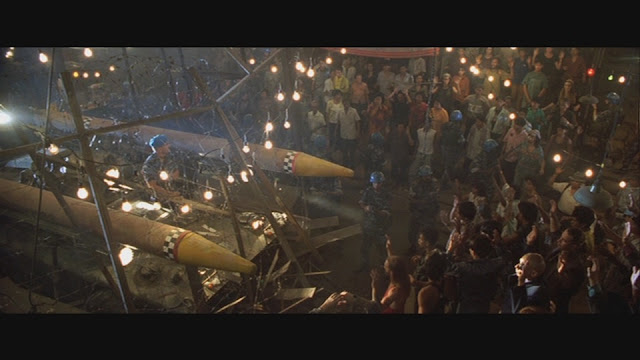 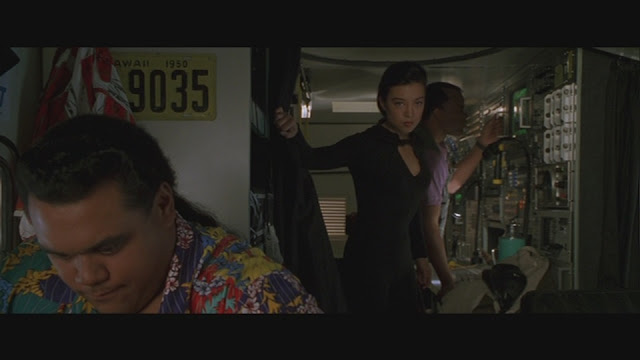 The choreography on display in Street Fighter is very good. There are impressive fight scenes and other such acrobatics, and everyone impresses. No actor looks like they could've used more time in the training room. Even Raul Julia is convincingly able to get into the action, despite setbacks I'll get into later/health setbacks. That's acting for you. The guy probably rarely threw a punch in his life, but you totally/100% believe he could snap someone's neck in a single move in this film!

As an adaptation/adaption of the video games, this is serviceable, I guess, making some pretty big changes, but ones I approve of. The biggest is the lack of tournament, but I feel this plot wouldn't make much sense with that plot point carried over literally. Better to stay figurative, if that makes any sense. We've also got a few minor changes involving character allegiances, but that's about it.

Where this movie stands strongest is with its characters. If nothing else, it makes time for everybody! The cast all get their time in the spotlight, from Guile, Ken and Ryu, and Chun Li all/each getting enough to do, as do the remainder of the cast. Even the more minor ones like Deejay get plenty, with short scenes being given enough importance to make a character with only 5 minutes screentime stand out.

The dastardly M. Bison is a fantastic antagonist, interacting at least a little with everyone else in the cast, and getting across the feeling well that he's the reason for of all these events happening and all these characters coming together. 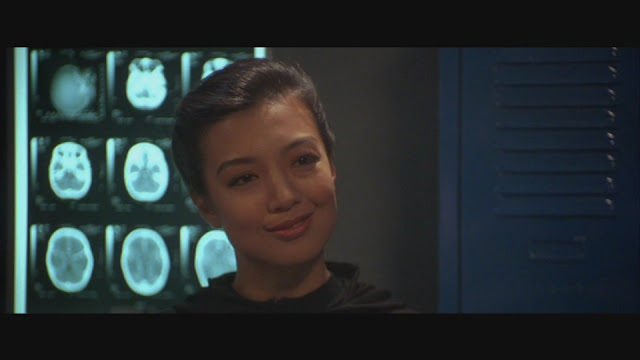 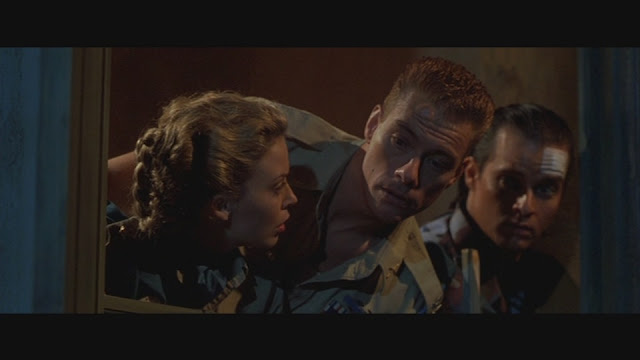 As lampshaded by the movie itself, Chun Li doesn't do any fighting in the first half, but that leads to a great moment, with a lot of build-up, and she fights plenty in the climax. It helps that despite not throwing a single punch in the first 45 or so minutes, she still appears a fair share, and does plenty of acrobatics and adventuring.

It's a bit odd that E. Honda has been switched up/changed from Japanese to Hawaiian. I guess they felt there were already enough East Asian characters, and wanted something different. And Hawaii and Japan do have a connection, so there's that. Balrog is villainous in the game but a good guy here, while Deejay's position is reversed from that. Nor sure why this is, but I really enjoy Balrog's friendship with Chun Li and Honda, so this is a change/alteration I don't mind. I like how the movie uses Dhalsim, as it makes more sense for him to be a scientist stuck in this mess rather than a fighter, given the character's a Hindu pacifist. 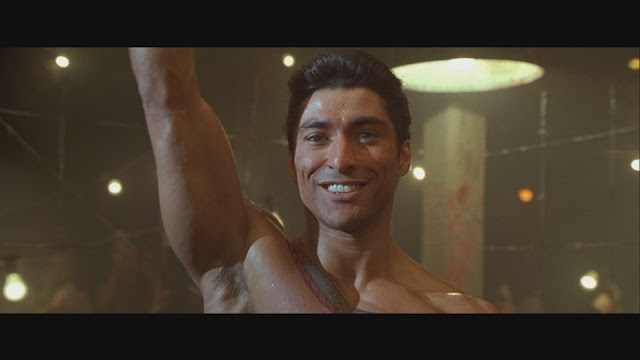 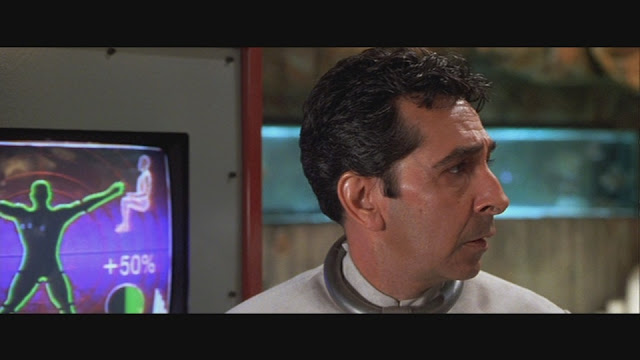 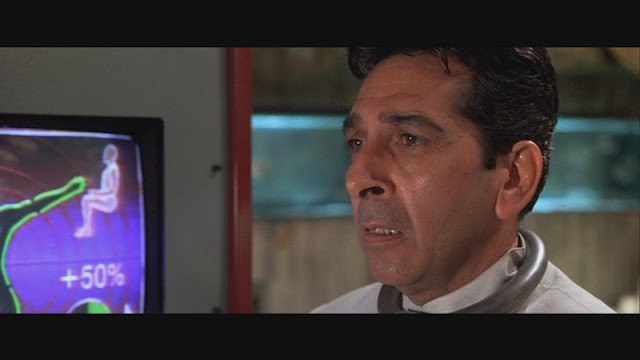 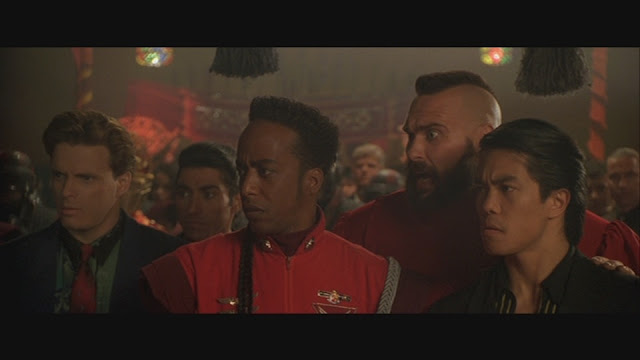 The acting in Street Fighter is hit and miss, mostly hit. With his Belgian accent and sometimes shaky acting, Jean Claude Van Damme is juuust a tad miscast as the all-American Colonel Guile, but once you get used to his presence, he's fine-ish. Damian Chapa and Byron Mann are fine in their roles, bringing enough heart with their friendship and differing attitudes. Ming-Na Wen is a great Chun Li, while Grand L. Bush and Peter Tuiasosopo do very well as Balrog and E. Honda. Wes Studi is a mature badass you don't wanna cross as Sagat, while Kylie Minogue is surprisingly good as Cammy! Roshan Seth has a stately and dignified performance as Dhalsim, doing a lot of non-verbal acting, while Andrew Bryniarski and  Miguel A. Núñez Jr. are a ball of fun as Zangief and Deejay.

Raul Julia is phenomenally good as M. Bison, by far the most memorable thing about the production. He performs beautifully, getting lots of fun dialogue, great speeches, and even some deadpan humour. What makes his performance all the more impressive and poignant is that he was dying of cancer as he appeared in this. Despite his body failing him, he puts on a great performance, ensuring that even though one of (if not THE/the) last entries in his filmography being regarded as 'one of the worst movies ever', this has never been viewed by even such detractors as a drawback for him. Julia's reason for choosing the role was a desire to spend more time with his children. He did his research, too, on all counts! He even pronounces Ryu correctly, unlike almost everyone else in this production. 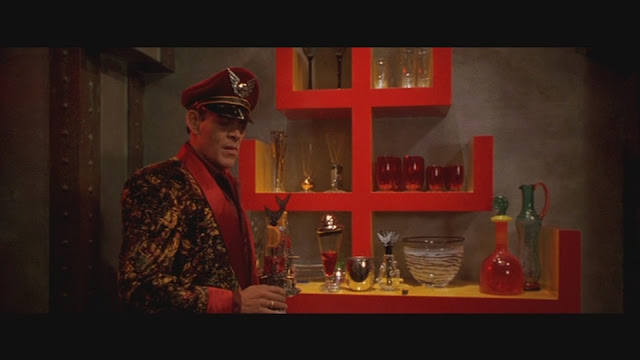 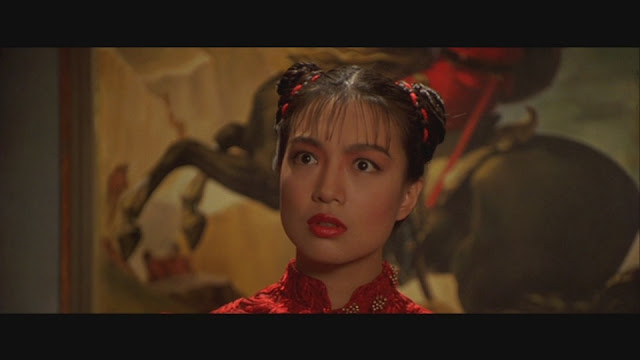 One very interesting thing of note about Street Fighter's cast is the amount of diversity on display! There are white performers from all across the pond, several black ones (from African-American to Jamaican), several Chinese ones, Japanese, Samoan, Indonesian (as played by a Native American), a Native American (as played by a Native American), Indian, and South American/Latino, among others! Quite a melting pot! It's hard to see anything with such a varied cast even today! Even Van Damme's casting could be seen as inclusive, showing that regardless of if you have a thick Belgian accent, you can still be a real American. That last one is no doubt unintentional, but still super neat!

However much I may like/love Street Fighter, there are problems I have with it. The biggest ones by far is early on when Ryu and Vega are about to fight (in the closest thing there is to street fighting in the movie), it gets cut off by Guile coming in to arrest everyone there. Dammit, movie, couldn't you have waited just a few minutes?! In a film lacking a little in fighting in the first third, this would have smoothed things out a bit, and would've only benefited things for multiple reasons! 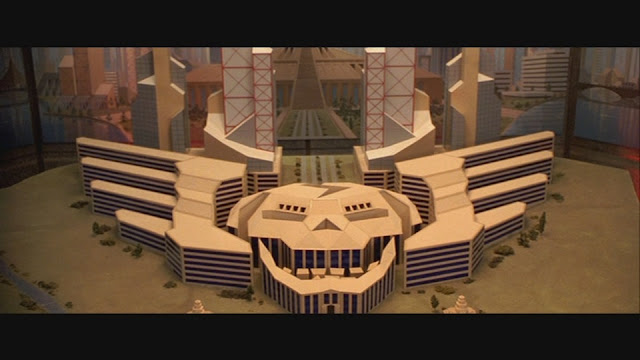 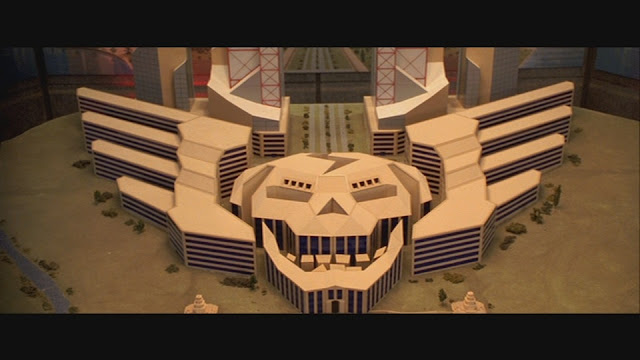 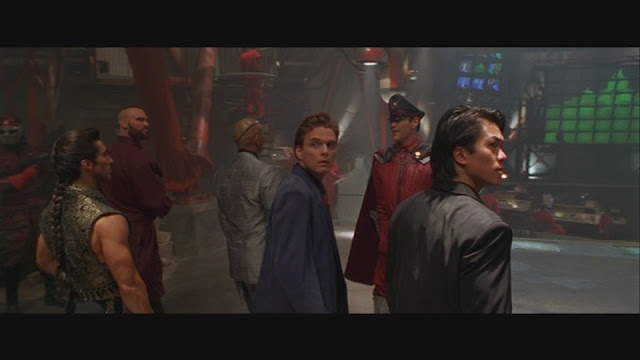 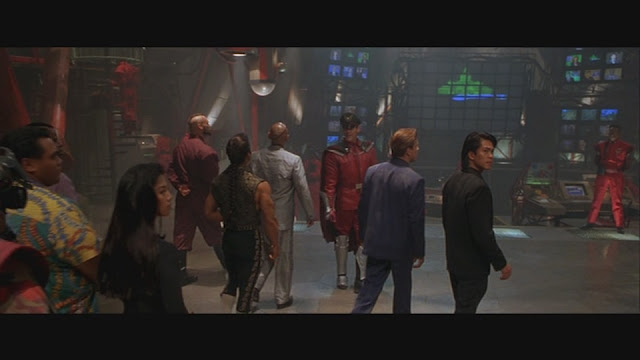 A couple of lines from Guile annoyed me too. The first was/is when he's telling a vengeful Chun Li about how "This war isn't your personal vendetta...It's about mine". That's not terrible, but it makes he character go from sounding wise and understanding to a dickhead in the span of three seconds. Next up is when he's announcing the assault on Bison's headquarters, and one of his soldiers points out the danger involved, and the soldier who takes this particular job in the mission would have to be insane, leading to the cheesy response of "Luckily Bison has driven me crazy...So I'm gonna do it". Ughhh, you killed the line with that second sentence, Guile! Learn to quip!

There's quite a bit comedy here, and some of it sticks, some doesn't, but there's none that I found truly dire. One line I felt was a bit weak ended up being salvaged quickly. That's when Bison is making his grand declaration of how 'Bisonopolis' will be the wonder of his new world...and then goes on to say where the food court should be. By itself, I found that a bit of a weak joke, but immediately following is Bison saying "All the big corporations will want in when I've crushed my enemies". If that [line] isn't on point and hilarious, I don't know what is! 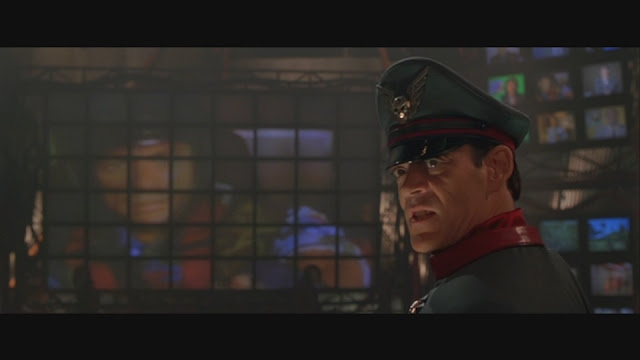 Street Fighter had a sizeable budget and it shows. It looks great! The locations are lively, and the set design is superb. There are countless extras, neat pyrotechnics, and immaculate attention to detail, to big things and small, helping flesh the world out. There are many little background treats and easter eggs to spot, such as the propaganda posters for example, and the faux-Thai alphabet. There's so much to spot that even after having seen this over a dozen times, I still see or hearnew things.

Street Fighter: The Movie may not be the best regarded film out there, but I really enjoy it, unabashedly. It's got so much to recommend, and so much to enjoy. And if worst comes to worst and you don't enjoy it that much, well many who dislike this still find plenty to enjoy ironically, so you can't lose much by giving it a shot! Be sure to give it a watch, or else M. Bison will come round to your house and rip your arms off!... 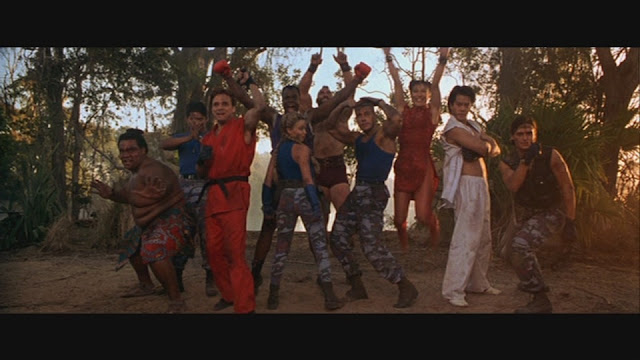