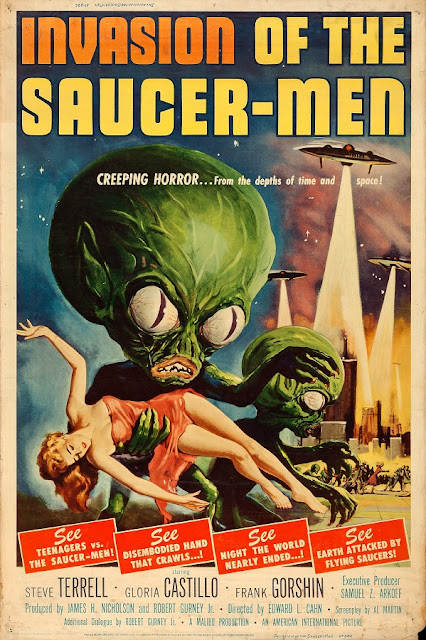 In a small country town, strange things are happening. Mysterious lights float in the sky, unknown crafts go 'nnningalingalingaling', and space men walk the streets! The only witnesses are the local kids at make-out point, and since the police won't believe them, they have to take matters into their own hands. Can they stop the invasion of Earth all on their own?... 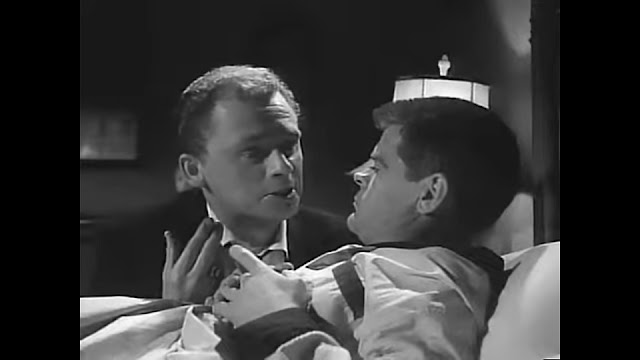 Invasion of the Saucer Men is one of the more fondly remembered B-movies to come out of the 50s. It's tongue in cheek approach is endearing to many, and it frequently tops favourite lists. As for my opinion, it lies somewhere in the middle. I think it's at the least an entertaining movie for sure, and hits a lot of the spots, but also felt lacking on other ways.
A lot of the movie is people faffing about a couple of rural fields for an hour, but that's not too much of a problem. The movie never pretends to be anything greater than a small-scale picture, and at only 69 minutes it's hardly drawn out. My main problem is that the movie doesn't go far enough. On one hand I admire that it respects the genre enough to play it relatively straight despite its sense of humour, and never becomes too farcical, but I feel it could've done so much more.
Unfortunately the aliens also don't do enough. We never get a sense that this is an invasion, just a couple of intergalactic assholes running amok in a single country town. They have a body count of 1 man (and only because he was already pissed), and a cow. 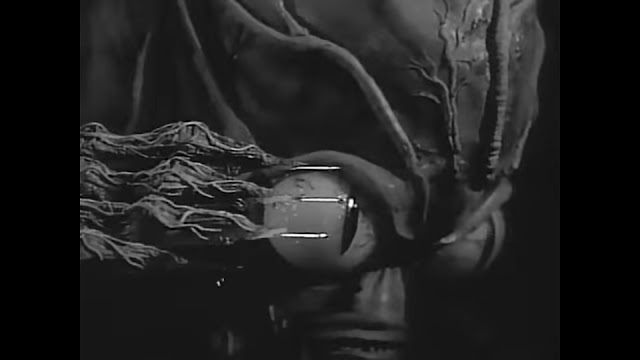 The characters here take the lion's share of the screentime, and they're an alright bunch. Johnny is a likeable 'kid'. He's considered by the adults as an untrustworthy roughneck, which is hilarious considering he is the most straight-laced young gentleman imagineable. He even wears a suit and tie everywhere he goes! And he's only 16! 'Supposedly'. His girlfriend Joan is cute and feisty. Your typical 1950s girl but with enough life in her to stand out.
These two are quite cavalier with alien life though! They're distraught at the prospect of having run over a person...but as soon as they realise it was an alien, they couldn't care less, and don't see why it's a crime. It's because killing a little green man from Venus is still classed as homicide on most U.S. divisions!
The remainder of the cast is filled out by the various authority figures (alias, squares!), and two visiting joe bloggs from out of town, who serve as narration and comic relief. They do their jobs well, though one gets killed surprisingly early. It's a bummer, since he contributed most of the comedy, but the movie does handle it well at least, and the impact it has on his friend's character is well-done. 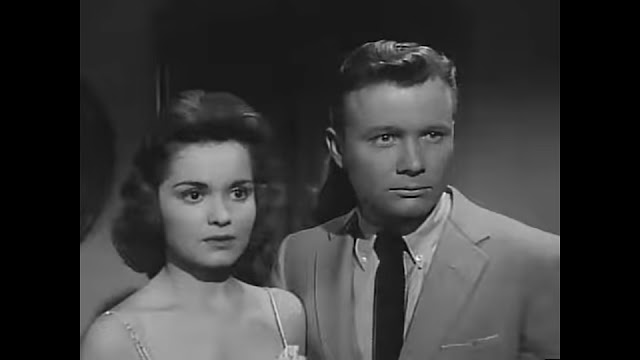 Last up are the other teenagers, who spend all night making out, and not even massive explosions faze them for more than 5 seconds. And it's a good thing too, because their mere presence in the make-out lane (i.e. a grumpy farmer's cow field) is all that's needed to ultimately save the day, in what could be a fun or unsatisfying climax, depending on your opinion.
The dialogue here is pretty funny.
"I wouldn't wanna hold back the wheels of progress. Or is it the progress of a big wheel.".
"Duke just said he saw a flying saucer." "Only one? Nobody's got a right to brag these days unless they see at least six. And in different colours!"
And the bizarre "I expected to be frightened on my wedding night, but nothing like this!"
The acting is all competent. Steven Terrell and Gloria Castillo are good leads, while Frank Gorshin and Lyn Osborn play off well with each-other. Killing Gorshin only halfway through is a terrible mistake though! 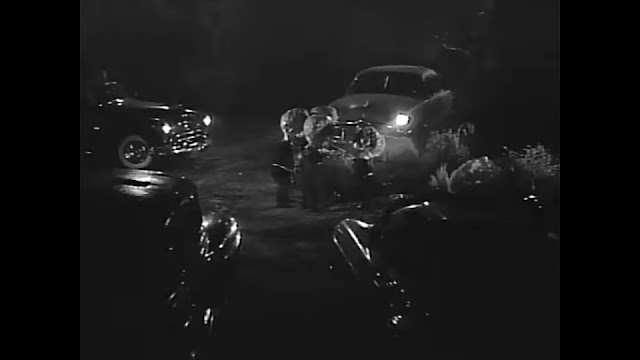 The effects  are great! The alien costumes are rightly iconic, and are used just sparingly enough to keep the mystery and tension, and appear visibly enough to satisfy. The spaceship is alright, and the disembodied hand that plagues the heroes moves convincingly enough.
Overall, Invasion of the Saucer Men has its issues, and for me it didn't deliver all I feel it could've, but it's still worth a watch if you enjoy b-movies. This one is definitely up there, and worth checking out...
Posted by Chris at 11:59 PM