The Thousand and One Lives of Doctor Mabuse (2020) 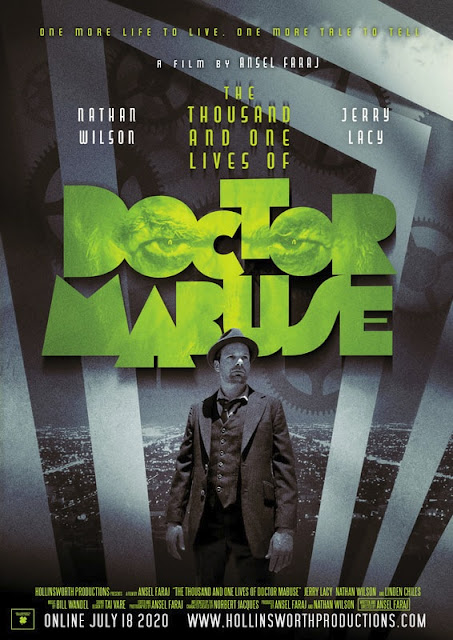 Indie studio Hollinsworth has done a few projects in recent years, from short films, to spooky features that look quite interesting! Also a short that resembles the hilarious Family Wolff (still holds up!). One recent bit of news gave me a start though, and like poor haunted Inspector Lohmann, I received]  a similar nightmare...There was going to be a third Doctor Mabuse film in their series!

It's been some time since the brave and noble Inspector Lohmann finally killed Doctor Mabuse, the arch-criminal who terrorised the city. But Lohmann still finds himself haunted by the memory of the madman, and worries if he truly died that day, or if this is simply another of his twisted mind-games...

2013's Dr. Mabuse and its sequel Etiopomar were not exactly well received by me. I found them terribly made, directed, acted, sound[ed], scored, edited, lit, and everything else under the sun. They were also very disrespectful to the source material, I felt. They use a lot of superficial elements, but the plots range from = to just plain weird! They're almost unrecognisable as a part of the franchise, and I strongly urge you to steer clear of them if you can help it!

The Thousand and One Lives of Doctor Mabuse (try saying that when you're drunk!) is a pretty pointless affair. The previous film had wrapped up the story completely! The Doctor was dead! Utterly! No body swapping to save him this time. Not only that, but literally every other character was dead too, save for a select few in a baffling epilogue. I was intrigued to learn how this third entry would explain how on earth anything could still happen in this series after that conclusion, and after having seen the film, I can tell you the movie doesn't even bother. It instead moves its focus to something entirely different, going back to Lohmann of the first movie.

On one hand I'm hardly sorry to see all that go, since none of it had a place in a = film, but on the other hand, if the previous movies went to the trouble of setting all that = up, it's a bit weird for it to be ignored, especially when that = ended on a (meaningless) cliffhanger.

a lot of the problems from the previous  are still present, not least of which being that everyone still mispronounces Mabuse. -ah! It ends with an -ah! Mabus-ah! Christ, I don't mean to harp, but simply watching one of the old movies tells you immediately how to say it, so not knowing how when you're making your own entry gives away that you've never actually watched them.

The story here is low-key. There's no grand plan or large roster of characters, nor even any =. The focus is entirely on Inspector Lohmann, and his lingering trauma about Mabuse. The majorioty of the film is a two-man play where he's strapped down in a chair speaking to a projection of Mabuse's head. The latter constantly asserts that he's not dead, and that reality is not what you know it, etc, while Lohmann's dialogue is just as predictable.

This structure is somewhat derivative of this team's previous Adam Sera short, but as far as the concept goes, this isn't a bad =. Got more than a few holes and inconsistencies, but not terrible, and if nothing else, it has a proper ending, which I appreciated greatly. We get an alright insight into Lohmann's mind,

Getting to the dialogue, it's not horrible, and some of the exchanges are quite good. But a few too many exchanges boil down to "You're lying" "Am I?", often with those same words (or variations upon) repeated. It started to get on my nerves a bit, and I found Lohmann to be a bit of a weak protagonist for not simply tuning the Doctor out. Close your eyes and think of Boney M, you'll be fine!

I like the psychological take on the characters, though I miss seeing a straightforward stories of Mabuse being a criminal, messing with the stock exchange or topping a bank. Aside from killing people, he hasn't actually committed a single crime in any of these movies! No counterfeit, no drug dealing, and no kidnapping!

acting = Nathan   The deceased Linden Chiles gets another chance to act, thanks to some unused footage from what I assume to be an = scene from the first movie. That was quite a surprise, and it fit well.

The direction here is unremarkable, and the largely CGI nature honestly makes it a bit hard to have any opinion of the direction. All we have to judge are a few swirly shots of Lohmann, staggering around a town square, or standing in his apartment.

Visually this is in the same boat as its predecessors, but improved. They're still filming largely in a green screen in =, but things aren't as =. The CGI is pretty cheap, but the black and white scheme alleviates this a little. As for the scenes in reality, modern apartments/houses still look ill-fitting for the tone and world presented here, but for a short like this I'll overlook it. Lastly, the outdoors scenes are pretty effective thanks to the complete absence of anyone else. It gives a good atmosphere.

Perhaps my biggest criticism of this film is that I feel it's a little too short. The idea perhaps could have been given another 15 or 20 minutes to really =, keep us in suspense, and explore interesting ideas about our current world.


The Thousand and One Tales isn't a movie that needed to exist. Its story is =, and as an addition to this series, as well as the greater Doctor Mabuse canon, it's pretty unnecessary. However, it's not entirely horrible, and has got at least a few good qualities, that save it from being on par with its two predecessors. This in no way scratches that fix for a real Mabuse film, but it's definitely the best = would ever make of
Posted by Chris Hewson at 11:59 PM