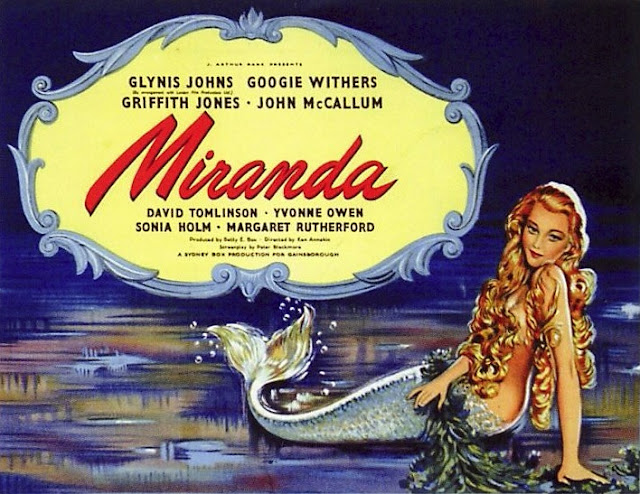 London doctor Paul Martin is on a fishing trip in Cornwall when he falls in the water, and is 'saved' by a flirtatious mermaid named Miranda. Content to keep her new man = in her cave, Paul convinces her to join him on a trip to the city. Posing as an invalid, she quickly gets to know all the men in the household, from the butler Charles, to family friend Nigel. Before too long she has them all wrapped around her little finger, causing trouble with their partners... 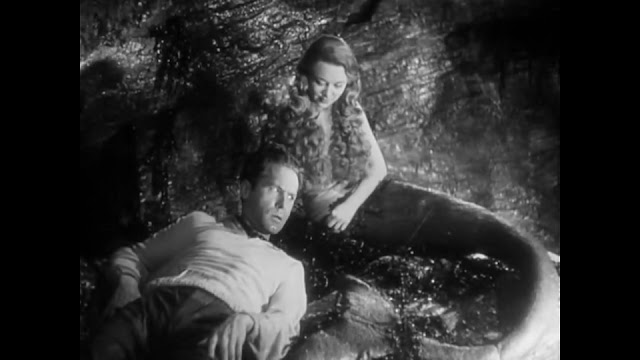 Miranda is a memorable and effervescent fantasy romance from the golden age of Britain. It manages to be a perfect mix of clean and naughty that the Brits were so good at. Just because they were dirty minded, didn't mean they had to be in your face about it, and by that same token, just because they were =, didn't mean they had to be sexless prudes!

The movie gets off to a surprisingly quick start, setting things up before you know it. The story is developed nicely, having moments both funny, sweet, and saucy. Things get difficult for the characters without ever being awkward to watch, which it could so easily have been with the wrong writer.

Also, I'm impressed it managed to get past the censors, too, especially with the implication at the end! If there's one thing censors hate, it's consenting couples having sex. Before you know it 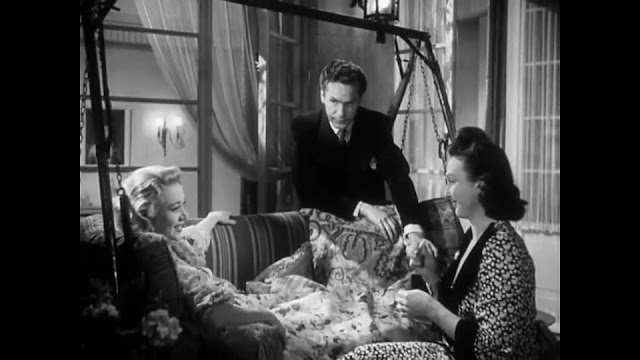 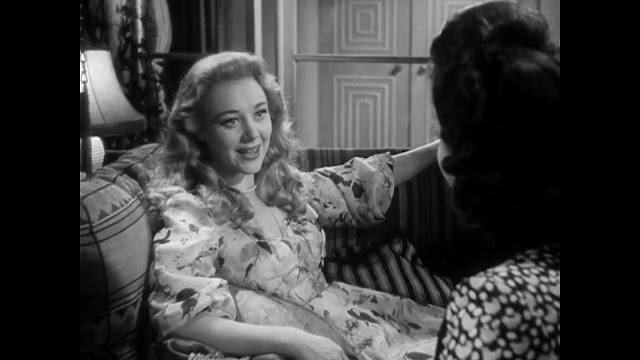 Things sometimes get a little cluttered, since there's a lot going on under this single roof, and I did wish we got more of Miranda's exploits out in public. Like at the opera! She wants to go there the whole movie but it takes until over an hour in before we finally see it

The ending is a bit underwhelming and confusing though. It feels like we're building to a big climax and confrontation, but then it's over pretty quickly and quietly, with =. The confusing part comes during the very end, a shot that doesn't really make much sense at all. It's an amusing enough moment to end the film on, so it's not like I totally hate the idea, but it does raise a lot of questions (none of which are ever answered or even mentioned in the sequel.). 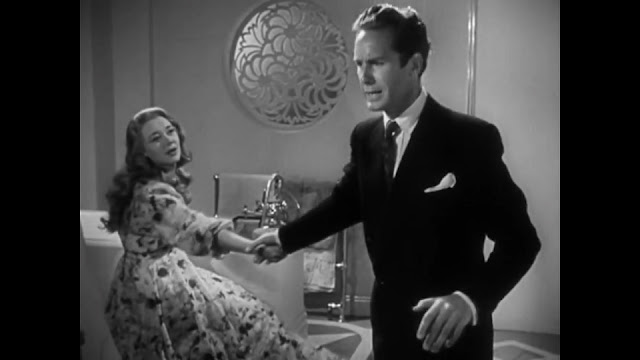 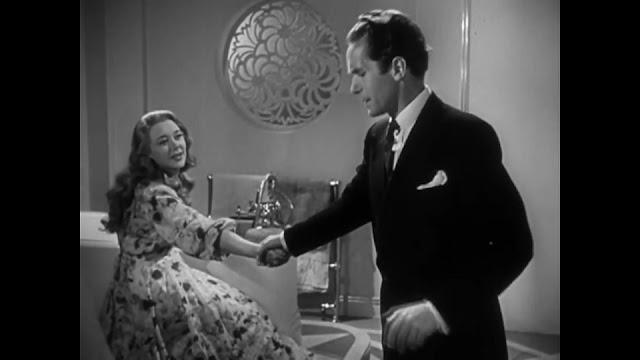 Miranda is a perfect lead. She's clever and fun to be around, always amusing. What impresses most is that despite spending most of the movie on the prowl for all these married men, she never comes across as unlikeable. This is a mix of a few things. Partly it's Glynis John's = portrayal, and it's  is a mermaid, not a human,so you automatically cut her a bit of slack. She never comes off as a homewrecking bitch.

Paul   is interestingly written, in that she's the bitchy spouse, hardly a ray of sunshine, but she actually redeems herself by the end, and =! It's pretty surprising, since I was expecting her to get dumped =. This was nice to see, and [unexpected]. Nurse Carey doesn't get a huge amount to do, but is lots of fun, especially her reaction upon seeing Miranda's tail. 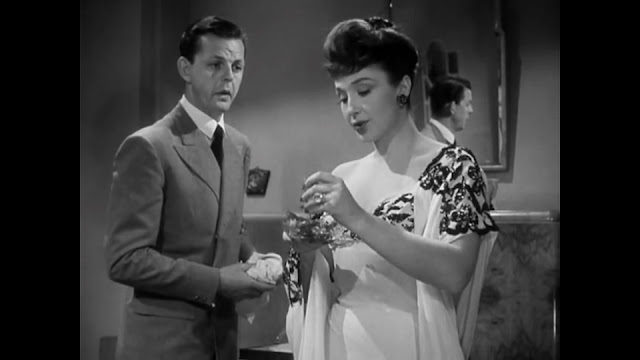 The rest of the cast are fine. Charles is played very straight, which makes it all them ore amusing seeing him turn to putty in Miranda's hands.    Some of them felt a bit unnecessary for a while, like Nigel and Isobel, and even the maid, though all eventually did serve a good purpose. I feel they probably should've been given more to do, and = to help stand out better among a pretty sizeable cast.

The actors in Miranda all do fine jobs. Glynis Johns as a spectacular leading lady. Blessed with an adorable voice, even more = in this film, she gives a lot of life to her performance, .  share good chemistry, and you don't notice the age gap between the actors at all. 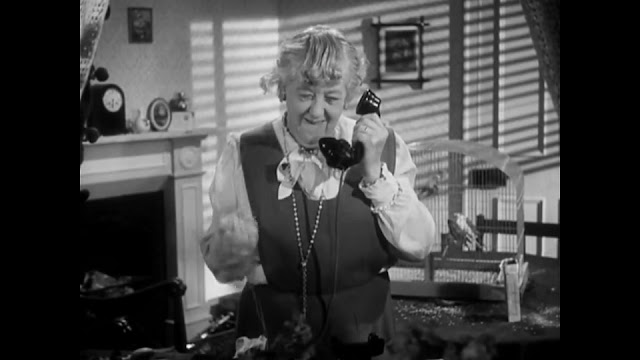 Margaret Rutherford is an enjoyable presence as always,  What really surprised me was seeing a shockingly young David Tomlinson here! He doesn't even have a moustache! I'm glad he gets a big and consistent role, since he does a good job, and it's nice seeing him this early in his career.

Miranda is directed well, with the mermaid scenes always looking good. And the crew sure knew how to photograph Miranda being seductive! 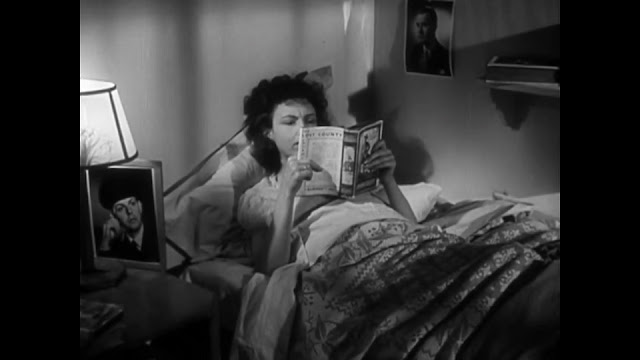 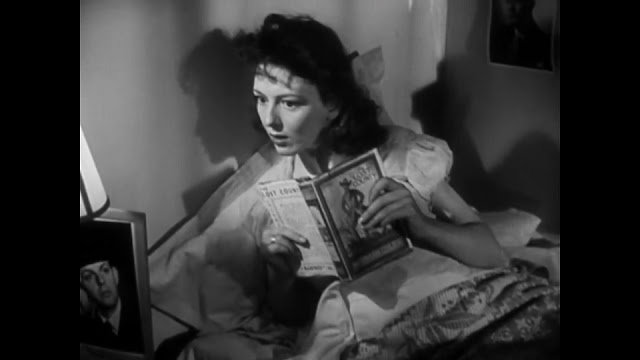 This isn't a hugely effects driven picture, since Miranda is covered up in a chair most of the time, and the story's focus is on romance rather than fantasy, but this is still a film about a mermaid, and on that front it doesn't disappoint. The tail is very good, and always moves convincingly enough. Props to Glynis Johns for managing to wear the thing well, too, and to swim in it without drowning/sinking! 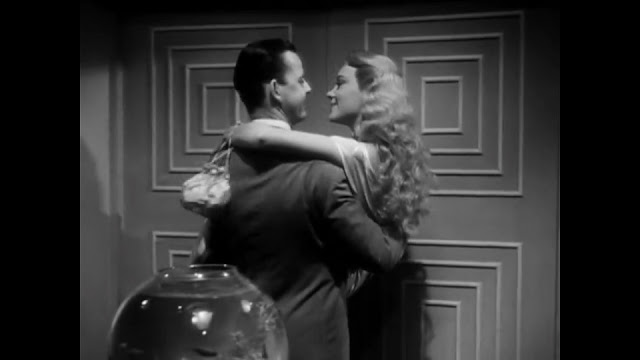 Miranda is a lovely time to be had, and a perfect snapshot of carefree post-war Britain. Perfect for anyone interested. 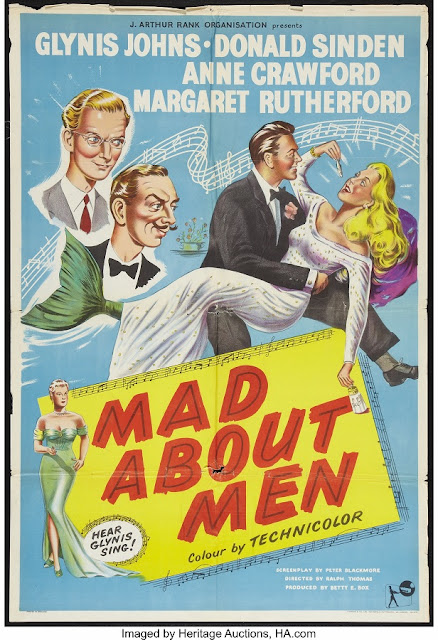 Teacher Caroline Trewella is exasperated with things, especially her wet blanket of a fiancee, and goes on a holiday to the Cornish coast. While there she meets her doppelganger, the distant mermaid relation Miranda. The two quickly decide to swap places, with Caroline using the opportunity to go on a biking trip, and Miranda will have some fun in the village. She makes the = of several men, enticing them with ease, but stepping on a few toes on the process... 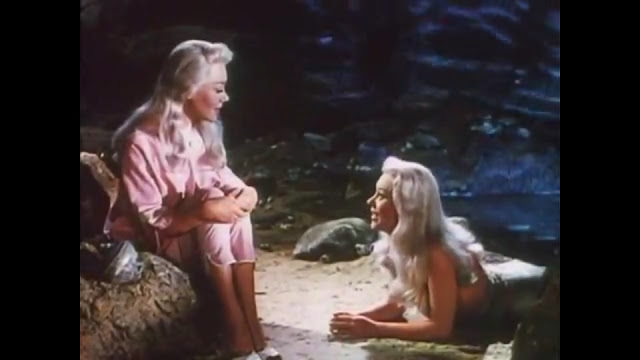 The title Mad about Men doesn't necessarily suggest a Miranda film at first, or even a movie about a mermaid, but once you recall the last one, and especially after watching this [follow-up], it's a perfectly fitting title! This is an engaging follow-up, doing just about everything a good sequel should. It's no masterpiece or anything, but it is just a pure slice of fun. Good natured, funny, and a little sexy!

The story here is funny, and ripe with potential. It lives up to it for the most part, and to the first film's reputation, never coming off/across as a cheap cash-in sequel. It treads the same territory, but in a different way, with the overall plot guiding the movie into a different direction than its predecessor. 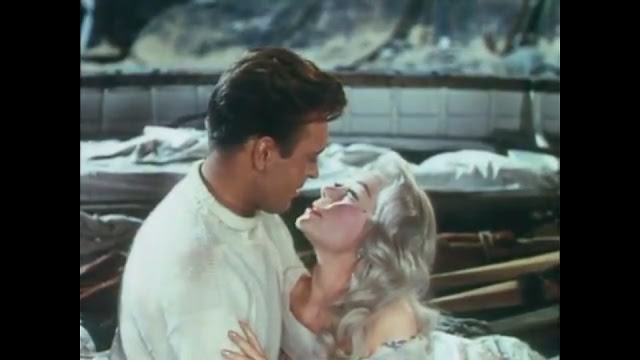 What I didn't like so much about Mad About Men is how it goes to the trouble of creating this double act, only to shove Caroline off biking for most of the movie! What's even the point then? We should've had Caroline inviting her cousin Miranda into the town  That could also have made the finding a suitor aspect make more sense, when the woman in question is actually here to confide in. As it happens in the movie, Caroline pops back in the last 10 minutes, an almost perfect stranger pashes her, and because he's hot she goes along with it and gets a new fiancee out of the [deal]! 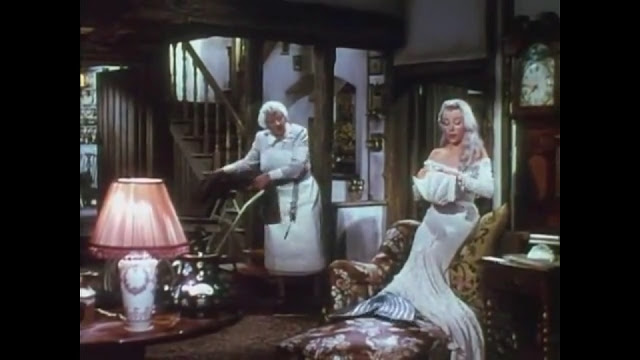 There are also a few things here and there that are either just a little bit confusing, or underused, maybe even unnecessary. The whole reason there even is a conflict in the end is pretty [weak], and entirely Miranda's fault for being on the prowl once again for an engaged man (unless that woman is his sister? I was a little unclear). It's also weird how quickly and easily Caroline's house/inn leads directly into Miranda's sea cave. 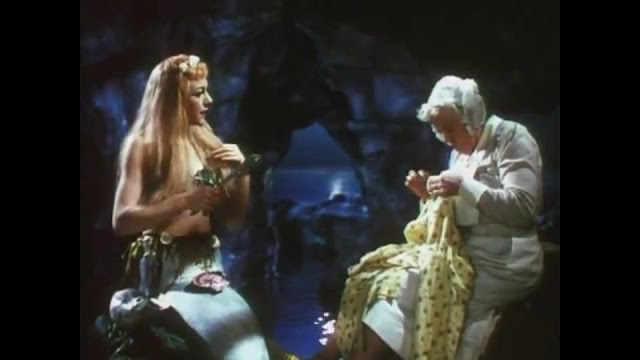 The climax is fun for the most part, with plenty going on, both funny and   It's not all perfect, as some things happen a bit too easily, and Berengaria totally ruins the moment for poor Caroline, but otherwise it all works well enough. The ending is interesting in that it's not only happy ,but also a little sad. I kinda wish we'd gotten a third entry to really wrap things up for Miranda herself.

The cast of characters here is smaller than the first film, ironically since it takes place in a bigger location. I'm glad we only have a couple of men to follow, rather than half a dozen. Miranda is as fun as ever, naughty and not even attempting to emulate Caroline, but everything is the better for it. Nurse Carey returns, getting many amusing moments. 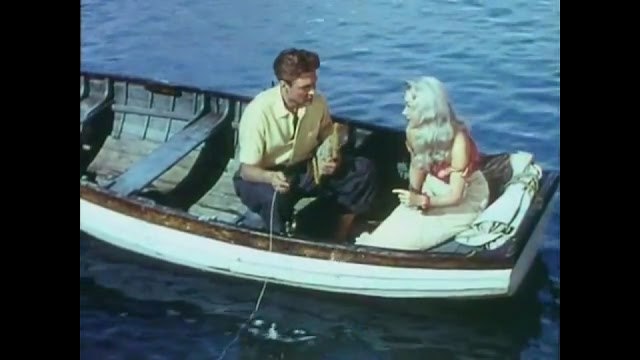 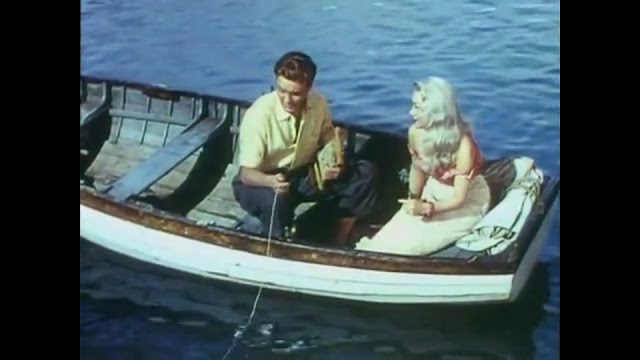 Caroline is a nice enough character, though I wish she appeared more. Same goes for a lot of the villains. The main lady is fine, but there's a whole host of mermaid 'scientists' who arrive in the climax to capture Miranda. They're fun, but only get a minute in total. Caroline's fiancee is a real jerk, in the best way! You just wanna punch this guy in the face. And lastly, Miranda's mermaid friend Berengaria (what a strange name!) is mixed. Sometimes she's amusingly annoying, other times she's actually annoying. I liked her presence though, even though she has the affrontery to steal from Margaret Rutherford! 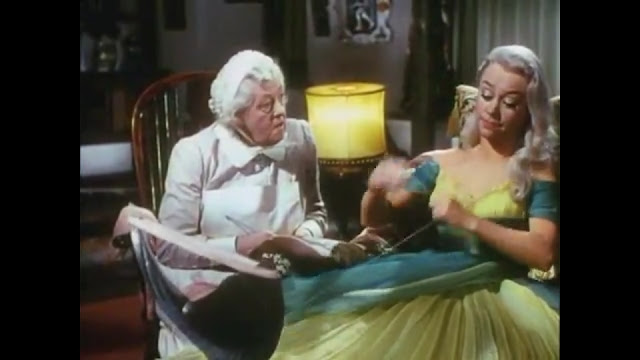 Glynis Johns is as bubbly as ever as Miranda, and also nice in her other role, even if she doesn't really get to flex her muscles in the role. Margaret meanwhile is a cutiepie! She's used well enough. Not in every single scene, but there are never any long stretches without. Dora Bryan ranges from a touch grating to fun. Donald Sinden and Nicholas Phipps are good as the two men. Romantic, somewhat hapless in the arms of Miranda

While the first movie was shot in black and white, this is in colour, and it really fits the aesthetic. The colours really pop out, and lend a nice flavour to the movie, without going too overboard, like turning Miranda's skin green or anything.

The music here is all nice enough, setting the scene well. Glynis Johns has a great singing voice, too. 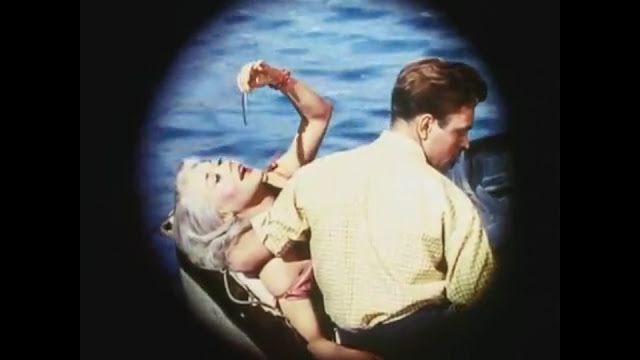 Mad About Men is another great time from British cinema, marking the end of a neat duology. It's good they stopped while they were ahead, but I don't think the world would be a poorer place if we had ever gotten a third entry!. Oh well, if wishes were fishes...
Posted by Chris Hewson at 11:59 PM