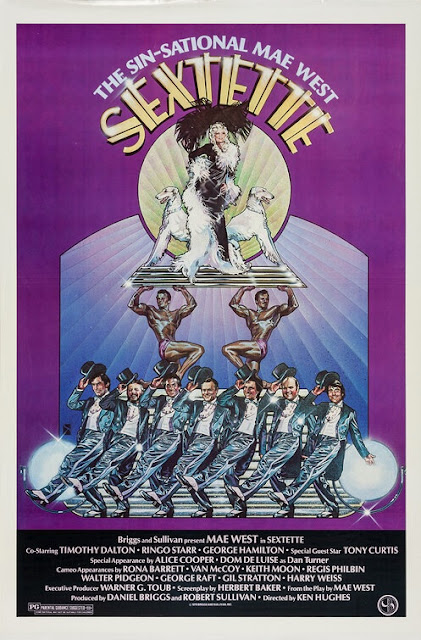 Sextette is a film with a heady reputation, one that sees it on the end of much mocking, as it stars the one and only Mae West acting like a total sexpot at 85 years old! It sounds like a crazy idea, but how does it play out on the screen?...

Newly remarried actress and apple of America's eye Marlo Manners has just walked] from the church with Husband No. 6, Lord Michael Carrington. Together they head to a lavishly decorated hotel for their honeymoon, where an army of reporters are there, as well as an important meeting of the world's leaders. While the couple intend to get down to business, they face constant interruptions when her = agent =. Will Marlo's latest marriage flounder on the rocks too, or will it withstand the various threats from previous husbands and ?... 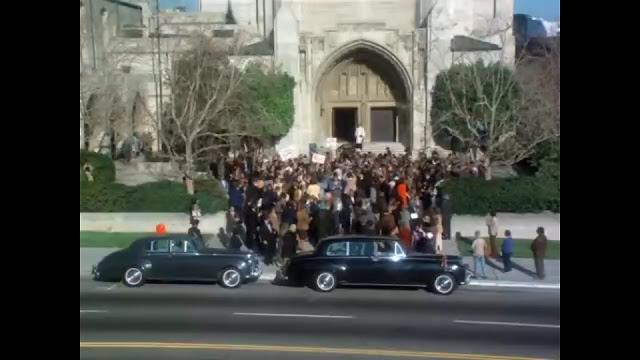 Far from being the disaster its reputation suggests, I thought Sextette was a surprisingly good time! It's a typical comedy of errors. You can see a lot of the gags and situations coming, but in the good way. The

Sextette is based on a stage play of West's own creation, and you can tell these stagebound origins in that the film is set primarily in one location, but thankfully the film uses the medium of film well. I've seen all too many movies based on plays that are every bit as staid and unmoving as if it was =, forgetting that what works on the stage doesn't for film, and if you're taking the trouble of making a movie of it, the least you could do is move the camera a bit! Sextette understands this, and not only is the camera often fluid, but we're often =, with plenty of variety to the settings and shots. 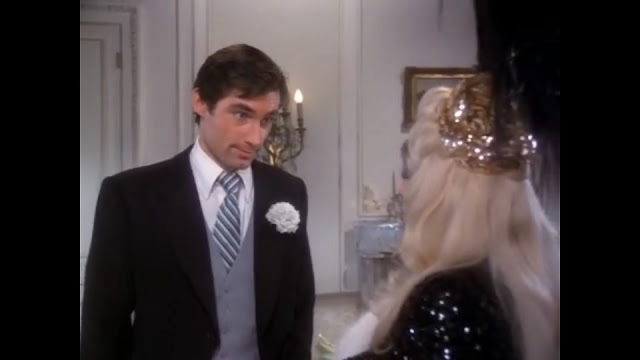 Sextette has amusing dialogue throughout, and there's a healthy dose of West's classic zingers. Some of them are inevitable (like the famous "Is that a gun in your pocket or are you just glad to see me?"), while others are used very well in the new context.    "When I'm good I'm very good, but when I'm bad I'm better!"  "Marriage is like a book. The whole story takes place between the covers." "As for your manager, he really rubs me the wrong way."-"Don't worry honey, I'll rub you the right way", including a hilariously = ending! She was a master of the double entendre, and proves how much we still need innuendos in today's modern world!

The most defining feature about this film is Mae West's advanced age, which is always the subject of mockery, but that ignores a key element to Sextette. They just think it's an easy target because the concept of a sexy 85 year old is funny, without realising she was IN ON THE JOKE. Morons! Whether or not you think she did it well is anyone's opinion, but to criticise her for = as if she didn't realise what she was doing is like mocking Peter Sellers for being 'accidentally clumsy'.

What's most interesting to me is how quickly it took for me to stop noticing. West has such an engaging personality that you honestly forget she's almost 90. The film never dwells on it as a constant joke, so it never gets old (if you'll pardon the pun). Also, she looks quite good for her age, honestly. Still old of course, but I'd say more 60s than her actual age.

Some criticise Sextette as a mere vanity project, but I disagree. Those who are vain hate aging with a passion. They always try and act like they're younger, but Mae never tries pathetically acting like a 20 year old. She proudly owns being a sexy septegenarian (octogenarian actually, but that ruins the alliteration). She doesn't exaggerate, but wears and displays what looks good for her now.

The acting here is all great fun  Timothy Dalton does   The couple share genuine chemistry depsite the hilarious age difference, and that really sells the romance. Dom DeLuise  Keith Moon is bizarre as a campy fashion designer, while Ringo Starr is odd but = as kooky filmmaker Laslo. Tony Curtis  He may have been a tale=, but he delivers a funny performance as 'Sexy Alexei'. George Hamilton plays very seriously as Marlo's mafioso ex, and his straight performance makes him stand out rather than get swept up in the large cast.

The film has a few little in-jokes, such as Mae having a brief meeting with old co-star George Raft. Moments like that feel nice, seeing these two = engaging once again/last time in their twilight years. Also present is Alice Cooper! Another real life friend of the leading lady. One of the things I like most about this film is the clout Mae West had. Despite the ridiculousness of the concept, all these world famous people = and instantly said Yes/hopped to it!

The music  West starts off a little = in some of the numbers, but finds her footing before too long, and proves that she's still got it even if she might have to work a bit harder =. The = was  Babyface number  Timothy Dalton meanwhile, as great as he is =, cannot  . Despite this = (and hilarious) drawback, the Love Will Keep Us Together number is still sweet, and acted greatly even if not sung =.

Dom DeLuise gets his own number  =, and it's pretty fun. The final song in the film is Alice Cooper's, and it's quite a good one! It's obviously different to the work he's most known for, but feels close to tracks like You and Me. 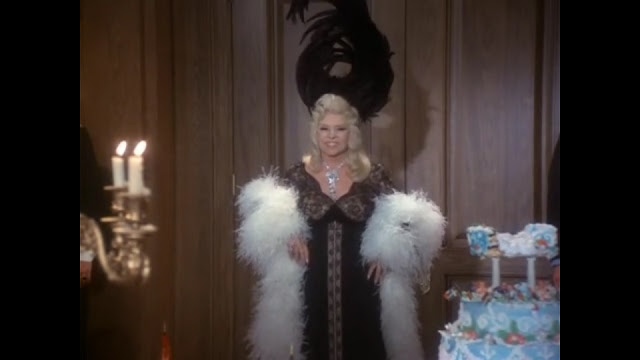 As of now, Sextette still doesn't have the best reputation, was regarded by many critics as a disaster (though a lot of the reviews feel phoney to me, like they'd already written all the snide remarks before watching), but it wasn't all bad. Upon the film's release and West herself was there for the fans, and reportedly] moved when seeing the turnout, and their positive reaction to the film. That's really nice to hear. Even if it didn't earn anything like $100 million dollars at the box office, it's still sweet that it had the reception and impact where it mattered. Overall, I definitely think it's worth a watch, as a curio at the least, and as a fun and fluffy comedy for a rainy day...
Posted by Chris Hewson at 12:00 AM