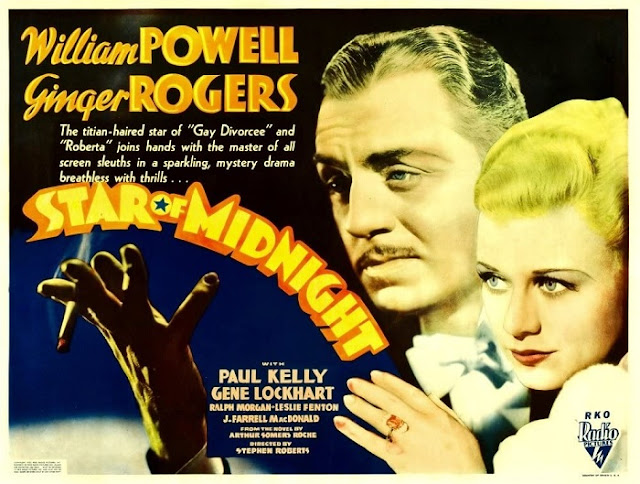 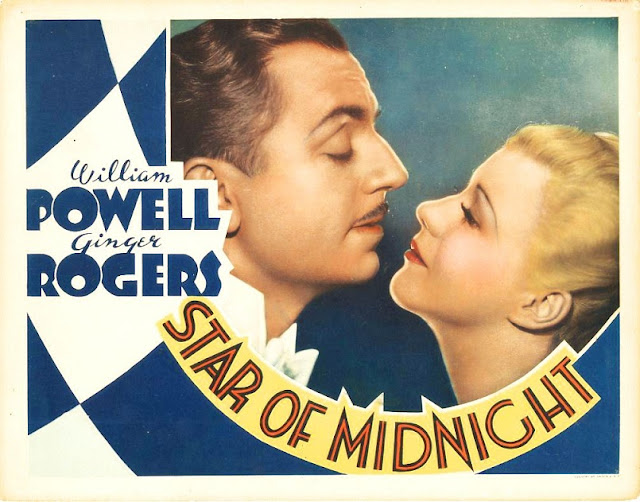 Clay 'Dell' Dalzell is a top-notch New York lawyer who's currently between cases and blissfully relaxing, when not being hounded by the man-hungry young Donna. One evening he is visited by a friend who desperately needs help. His old girlfriend has resurfaced after mysteriously disappearing, and he needs Dell's help tracking her down. No sooner than Dell has turned the boy down, a noted columnist is shot dead in his apartment, with the young man being the main suspect. Now Dell is faced with finding this woman and his friend, and solving the murder before he's found guilty himself... 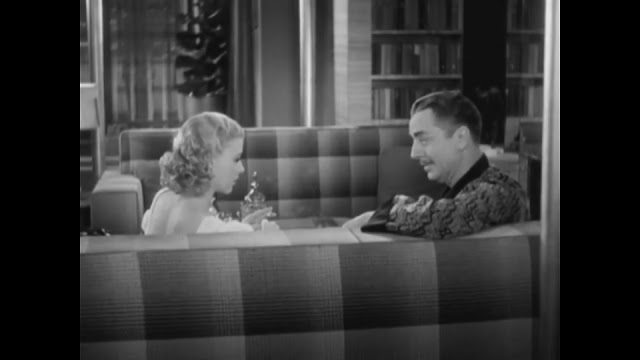 Star of Midnight is a typical example of 1930s mysteries. Have an overcomplicated plot, a liberal sprinkling of comedy, romance, and more intrigue than you can swing a cat at. This isn't quite in the same league as the famous Thin Man series (a contemporary, featuring the same star no less), but it's still a pretty good watch.
The plot here presumably makes sense if you have a flowchart big enough to follow, but it's a bit hopeless for the most part. It's not that the story itself is that complex, but the way it's handled makes it harder to follow than it needed to be. 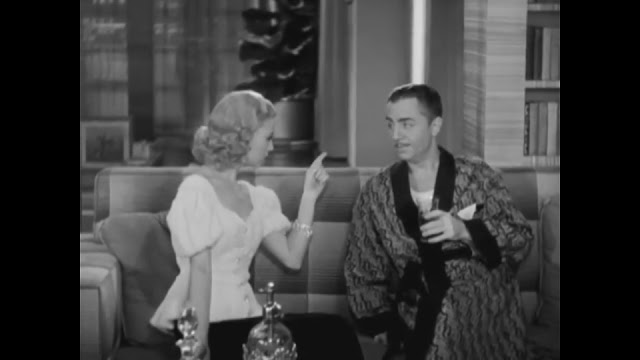 The film has a strong introduction to the characters, and to the central mystery. Who is this mystery girl. Where did Dells young 'friend' go? Is he the guilty one, or an innocent stooge? All important questions raised from the get-go. The problem though is that after these opening developments, the next half hour is devoted entirely to the police rocking up at Dell's flat to try and prove his guilt/innocence. The movie focuses so much on this   that it's at the cost of the mystery. He doesn't actually start to investigate until 40 minutes in! Star of Midnight really is a movie that could've comfortably been an hour long, or at least use that spare half hour to clear up the story instead of assing about. 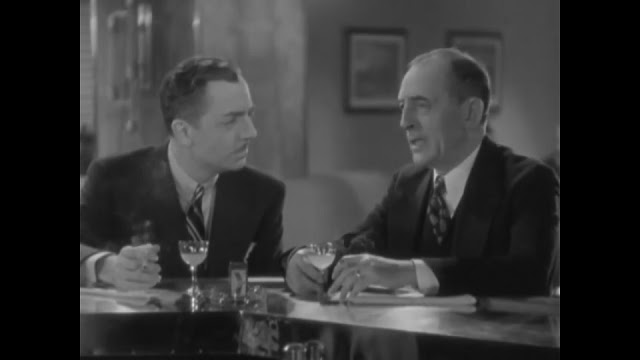 The characters here are a decent bunch, and they'd have to be for all the focus they get. Dell is your typical 1930s detective. He absolutely hates the idea of solving a mystery, and has to be prodded into it. Come on, man, you're supposed to live for this sort of thing! Once he gets into the groove though he's an intelligent and tenacious hero. Sidekick and semi love interest Donna is a real handful, constantly making intimations towards Dell, just about planning their marriage. She's a real man-eater with eyes only for him, and it's pretty amusing to watch.
The cops are mainly comic relief, and in that capacity they work pretty well. The gangsters are a decent presence, though end up not having much villainous stuff to do, even becoming allies in a way after a certain point. The rest of the cast is alright. 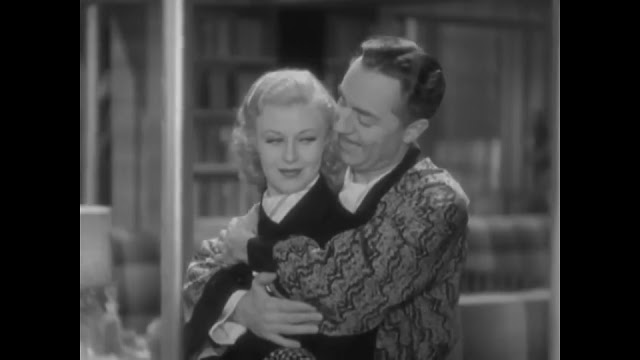 Unfortunately the movie doesn't do a good job establishing who the mystery woman is, leading me to mistakenly believe she was that ritzy married dame that Dell had a past fling with. Because we never see her till the very last minute, we never get to know her, which is a problem in a movie devoted entirely to her identity.
William Powell is smooth and debonair as the hero, often curt, but in a way that's enjoyable rather than annoying. Likewise for Ginger Rogers, whose character could well have been obnoxious with a lesser actress. She does very well, and is the definition of spunky! The two leads have plenty of chemistry,  Something surprising to note is the age difference! Donna lusted after Dell as a little girl, and he was already an adult then, yet the two actors look exactly the same. But after looking online, it turns out there really was a 19 year age gap between the two! You'd never notice. Thankfully this age-gap romance is portrayed well, and never creepily. It's always the younger Donna after him, and they're both adults at this point. 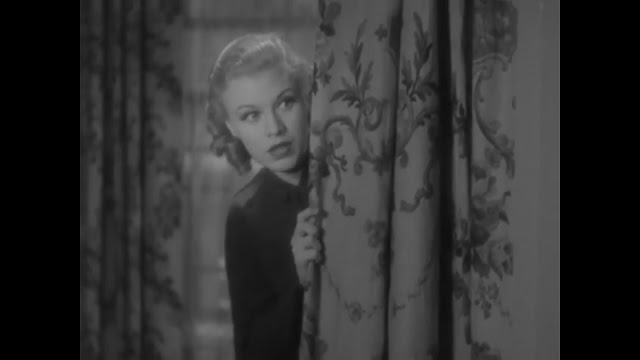 The rest of the actors do fine, despite not appearing as much or as consistently as they should have. The detectives leave the best impression, and are amusing back-up/comic-relief. They nail a good balance of skepticism of Clay, along with support and belief.
The villains are an ok bunch, some more memorable than others. The reveal at the end is pretty unexpected! A bit out of nowhere, but fun all the same.
The appearance of this movie is alright. Everything looks fine, as it should, but the movie is so housebound that it ironically looks cheap! This wasn't a 'poverty row' flick, but rather a big name vehicle, yet it looks like it was filmed on a wing and a prayer and $10 bucks, in the director's apartment. 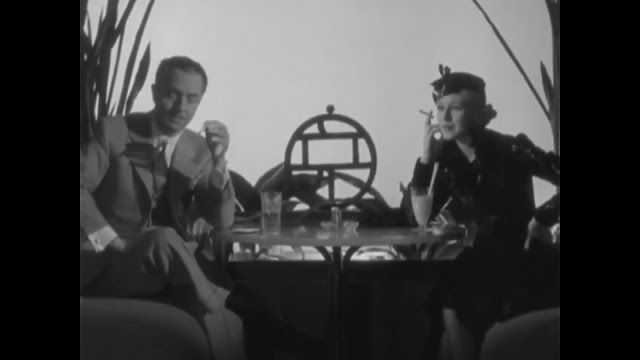 Star of Midnight isn't perfect, and could do with a touch of fixing here and there, but for the most part it's an effective mystery, with some great actors headlining! Whether playing S.S. Van Dine or The Thin Man
Posted by Chris at 12:00 AM