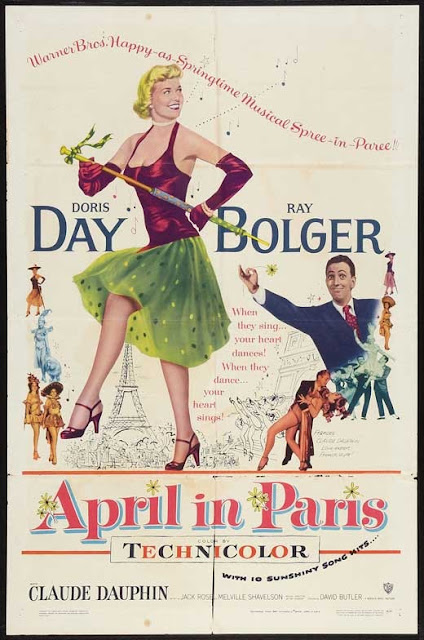 Ethel is a chorus girl who's finally hit the big time, after receiving an invitation to perform at a government exhibition in France. Unfortunately for her it all turns out to be a big mistake, caused by one S. Winthrop Putnam, Assistant Secretary to the Assistant to the Undersecretary of State. He goes to break the bad news to her, and no sooner than he has, he receives word that this change of plans is a great idea, and sending one of America's 'common folk' will be perfect for foreign relations. After a few thrown vases and pointed insults, the two sail off to Paris, where love awaits, among other more unpleasant things... 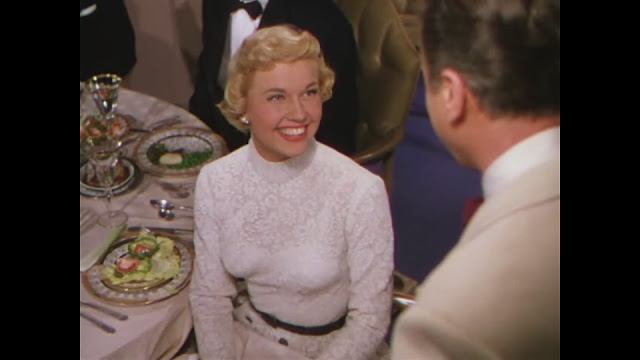 April in Paris is a sweet rom-com, with a lot to like. It starts off strikingly enough, and sets up its plot in an interesting way, with characters you look forward to seeing develop. Despite the early conflict, the romance goes so swimmingly that the plot seems to resolve itself 70 minutes in. But don't worry, some amusing shenanigans keep the action going, in an enjoyable manner.
The film gives a really good (read: really frustrating) depiction of politics, and what a load of bullshit it is. It's a world where everyone is forced to act like such stuffed shirts, they adore nepotism, fun is prohibited, and foreign food is abhorred. 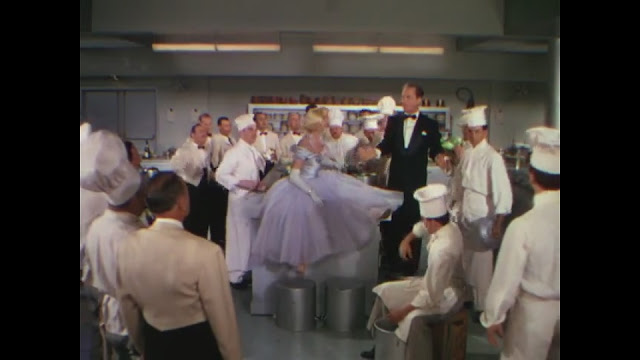 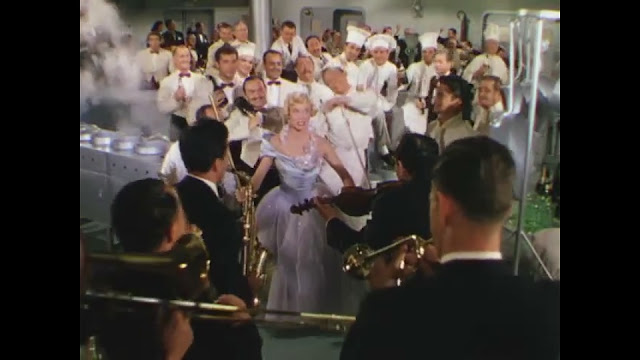 The characters are all fun in their own unique ways. Philippe Fouquet is like a Greek chorus, setting the film's events into motion, and playing a big role throughout. He is typically horny, as all Frenchmen are, and is a fun guy. Sam is the main protagonist, and is a nervous nelly, having worked his ass off to little reward in the political world, but afraid to make any fuss in-case he get fired. Ethel meanwhile is a fun-loving loose cannon, who's pretty much your average girl-Something that entrances Sam but pisses off all his higher-ups.
Now, let's come to the matter of length. Is April in Paris too long? At first, no, I felt it moved at a nice cracking pace. But as I mused on how nice it was seeing the romance develop, I did muse on how it was happening fairly early. This was only like their 4th scene together...Then I realised it was a full hour into the film!! So no, the pacing isn't bad in the traditional sense, but it's not perfect. 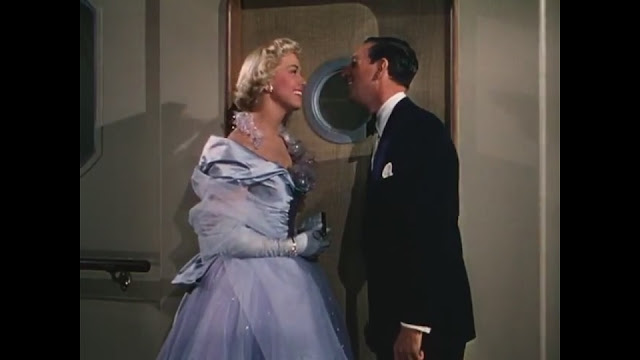 I liked how sweet the two leads are on each-other, especially after their frosty beginning. But then the movie goes just a wee bit overboard. They get so lovey dovey it's a bit sickening, and unbelievable. Are we really expected to believe that these two are so in love that they're already determined to see the ship's captain, to have them married?!  But I did appreciate that instead of spending the whole movie in a will they-won't that status, the lead here actually marries his love interest, only halfway though. The remainder of the conflict is based on the couple trying and failing to have sex (naturally the movie can't let a *gasp* unmarried couple fuck), and Sam not manning up and telling his family (namely his fiancee).
Despite the title, not much is made of the film being centred around Paris, until the last 20 minutes
spectacularly awful fashion, and   dogs   Aside from a few lavish sets, the majority of the Paris action (or indeed the entirety of the film) feels very setbound, just set in boring old buildings. It's not bad enough to be a dealbreaker, but by the end I did wish there was more  Parisian glamour 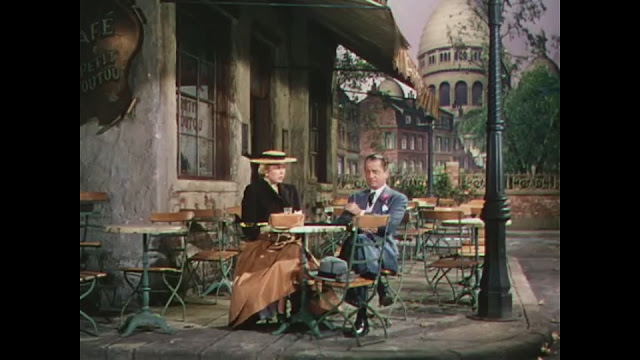 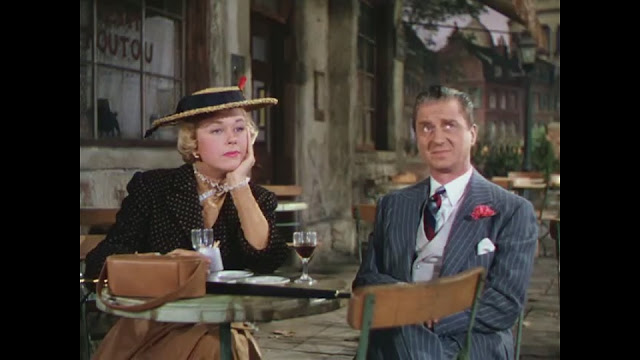 The actors all do good jobs, namely the main trio. Day is charming, down-to-eath, and gets to be both romantic and grumpy. She flutters her eyelashes in an adorably sarcastic way! Ray Bolger is an amusing lead. He kinda reminded me of Red Skelton, but less full-on. As a protagonist, he's a bit against type in that he's not a handsome supermodel, but just a regular weedy looking guy. Claude Dauphin meanwhile is a good comedy Frenchman, who's just goofy enough to earn laughs, while being just suave enough that you can almost see why women would throw themselves at him.
The songs here are mixed, but overall I'm a fan. Every musical number is vastly different from the last  even the ones I didn't like as much I still appreciated here thanks to little touches here and there. Some examples of the creativity are a a windy autumn song performed to dogs, and a fantastic three-way dance number with Sam and two presidents, with seamless choreography. 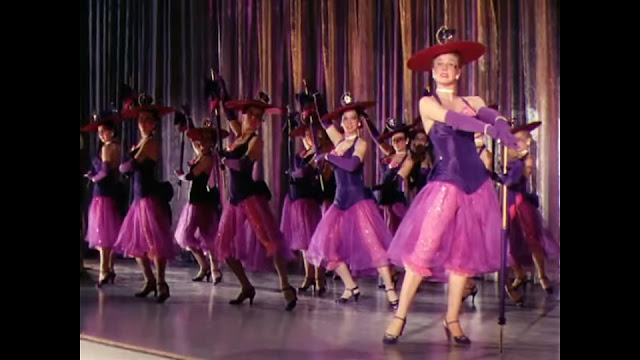 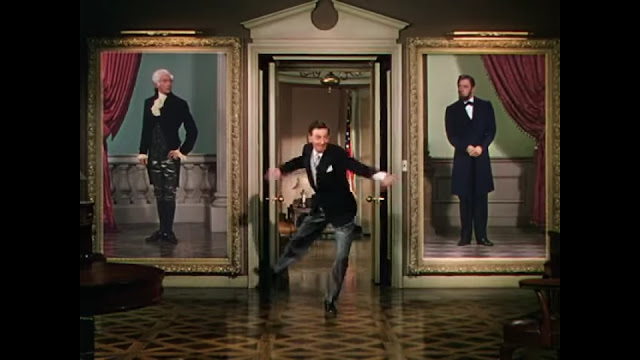 The dialogue here is frequently hilarious, witty, and barmy.
"Didn't you receive my telegram?" "Yes I did, but Western Union wouldn't send my answer."
"I'm in love with the man I married. And he's not even my husband." "Even in Paris that is an unusual situation"
"Philippe, how do I convince this poached egg that I love him?" 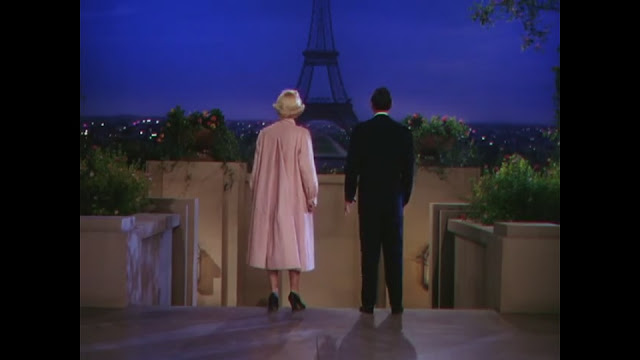 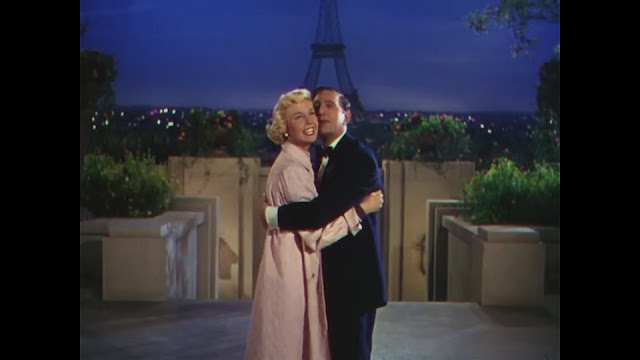 April in Paris is a great time! A little long, and saccharine in places, but also wickedly funny, and has some great song-and-dance moments, so it's overall well worth a watch!...
Posted by Chris at 7:23 AM