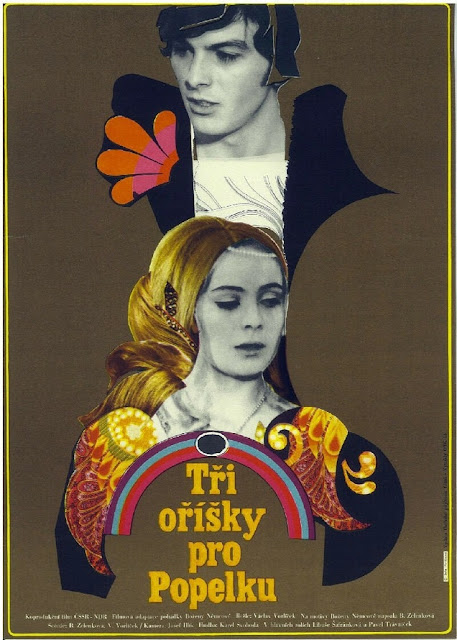 Today I'll be looking at a couple of Czechoslovakian fantasy films, perfect for the festive season-Three Hazelnuts for Cinderella, and How to Wake Princesses.
Popelku is a pure young girl living a bedraggled life after the death of her father, head of the community. Now everything is run by a wicked stepmother and her selfish daughter, who constantly put her down and force her to work endless hours. One day a friendly worker gives Popelku a hazelnut sprig, and when she absentmindedly makes a wish while holding it, a wonderful thing happens. Now aided by magic, she sets her mind on meeting the handsome prince visiting... 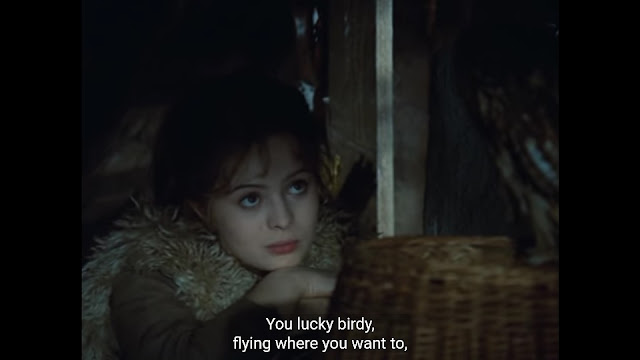 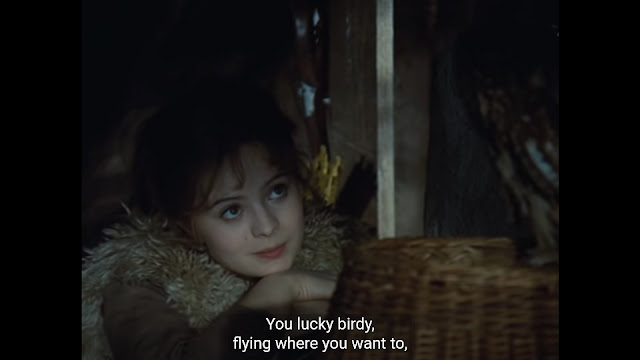 Tři oříšky pro Popelku (aka Three Hazelnuts for Cinderella) is a lovely rendition of the Cinderella legend, and ranks as one of the best I've seen! Where it excels is in showing drama without going too far. Many adaptions of Cinderella revel in the misery, showing just how horrible the girl's life is for just about the entire runtime, and it can get unpleasant to watch! Popelku meanwhile shows the harshness of the situation, but we see light moments too, and one never overpowers the other. There's just enough, but not so much that the movie's first acts become an unbearable slog. 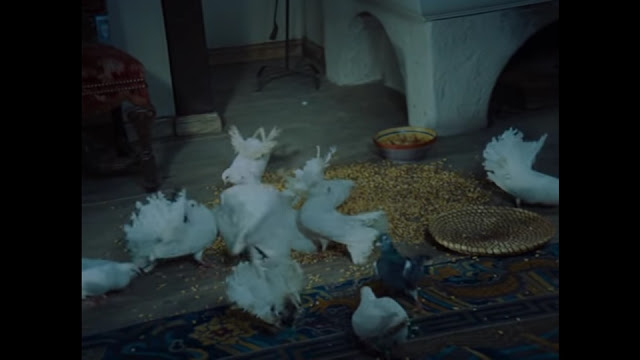 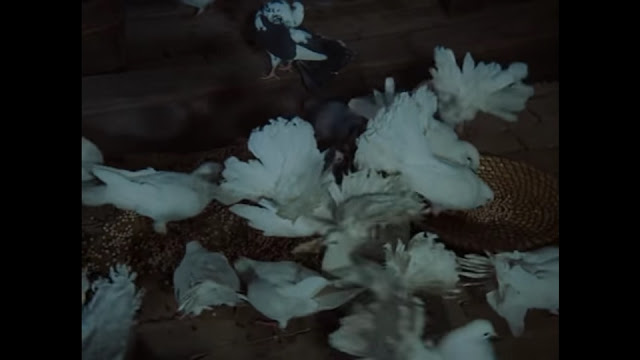 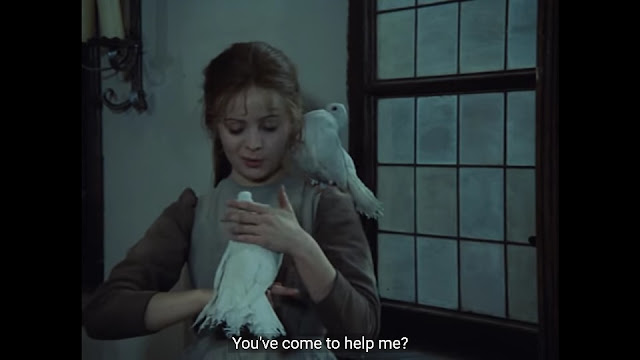 The various situations Popelku gets into with the help of her wishes are amusing to see, like her sojourn as a hunter, where she outmatches the prince and his friends, or the famous Cinderella ballroom scene. There's plenty of recreations of the iconic moments of the fairy tale, with enough new stuff to keep things fresh, leading to a typical but enjoyable climax.
The characters here are all strong. Popelku is a charming lead, never letting a moment's misery ruin her spark, and always up for some cheeky adventures. Her malicious step-family are delightfully mean and conniving, and often get little comeuppances here and there. It's equally fun seeing them worming their way into the royal party, and getting snubbed at the palace. 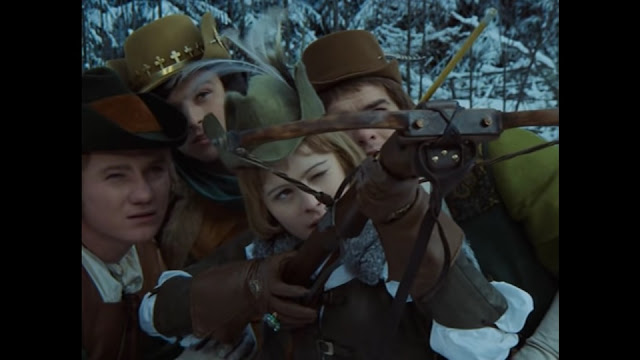 The royals themselves have a good dynamic, with funny back-and-forths between the frustrated king trying to get his rebellious son married, all while the Queen is like an impartial mediator, wanting her son to get hitched but also calling her husband out with a smirk when he gets unreasonable (like when he goes from forcing his the prince to be married, to forcing him to stay single when he doesn't approve of his choice of partner). 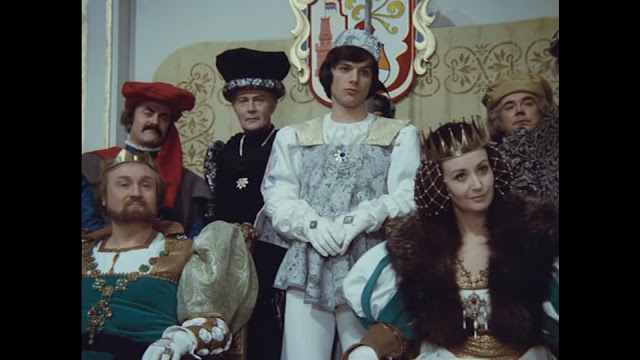 The soundtrack in Three Hazelnuts for Cinderella is one of its best features. There's a large variety of different tracks, all very gentle and sweet melodies, with a few songs peppered in throughout. 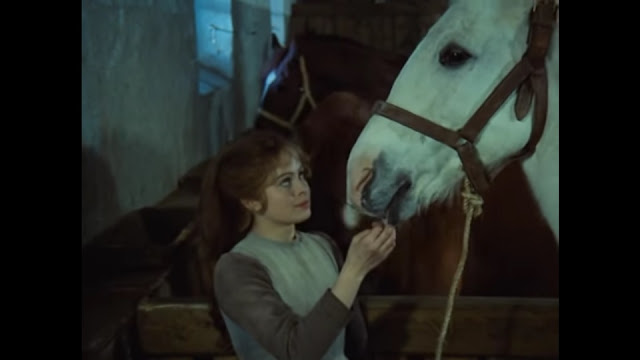 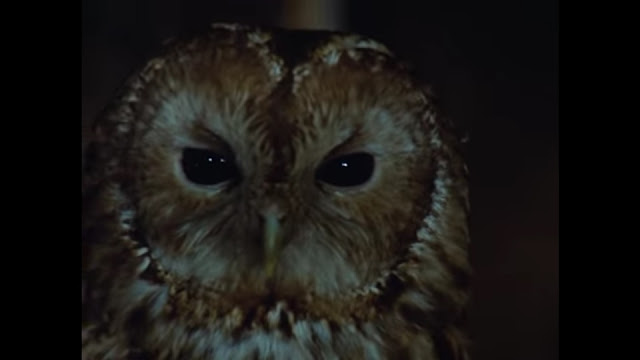 A highlight of the film are the many adorable animals, from the noble horse Jurasek, to the puppy Silly-Billy, and the wise owl Rosie, who takes the role of fairy godmother. The owl is a great actor, getting across lots of emotion with its expressive eyes, all without saying a word. The best scenes are whenever the stepmother pours out bowls of lentils and corn, demanding Popelku separate them, and as soon as the girl is alone, dozens of friendly birds fly inside and helpfully sort them out for her. Awwww! Serious props to the creators of this film for handling the animals so well. Nothing is done poorly, not even the horse nodding in one scene. 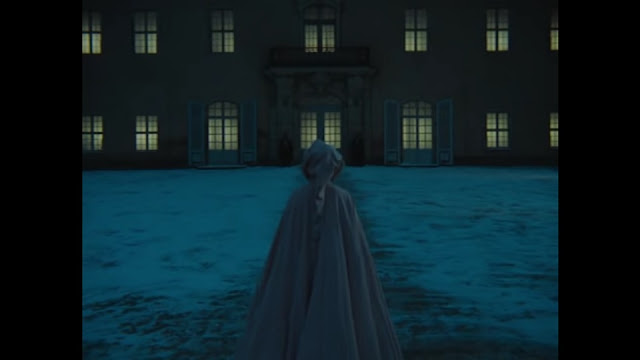 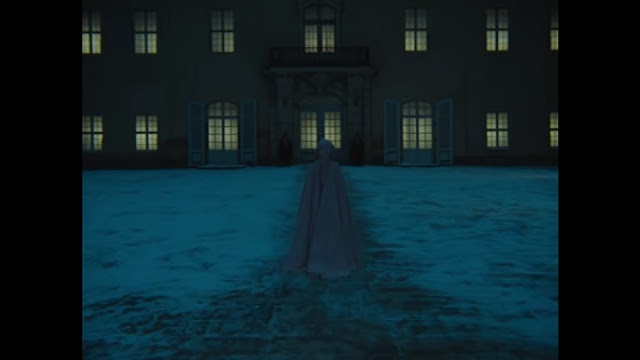 The movie's locations all look wonderful too. Set at the height of winter, we get to see Czechoslovakia in all its snowy glory, and many pretty natural settings, from forests, to fields, and frozen lakes. The dwellings are all great too. The village is either a legit old township or a great set, and the palace convinces entirely, precisely because it's probably a real palace. That's the great thing about Europe. You're only ever a stone's throw away from grand palace or ancient ruin. 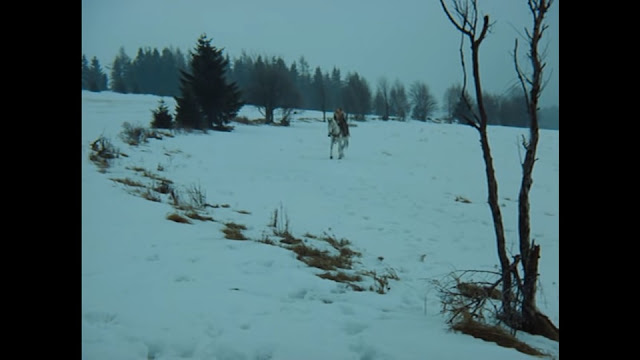 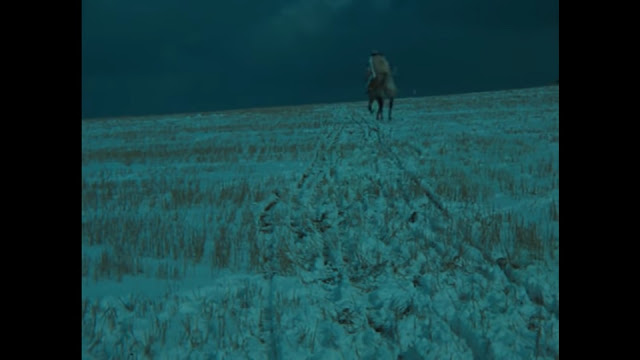 Everything else works well here. There is a stable of familiar faces in Czech cinema, all delivering good performances. The effects, meanwhile, are good when used. Sparingly but effectively. The costumes are all great too. Exactly as antique, colourful, and fancy as you'd expect for the fairy tale period. 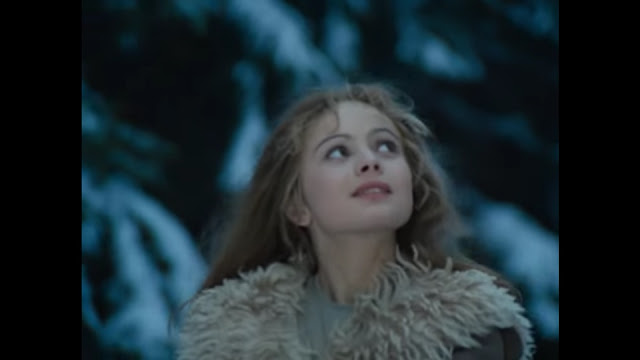 Tři oříšky pro Popelku is a wonderful movie, and has become a Christmas classic in its home countries for a reason. In fact to some it's earned the status of "Christ, not that movie again!", and that's how you know something's succeeded at worming its way into the consciousness of a nation!... 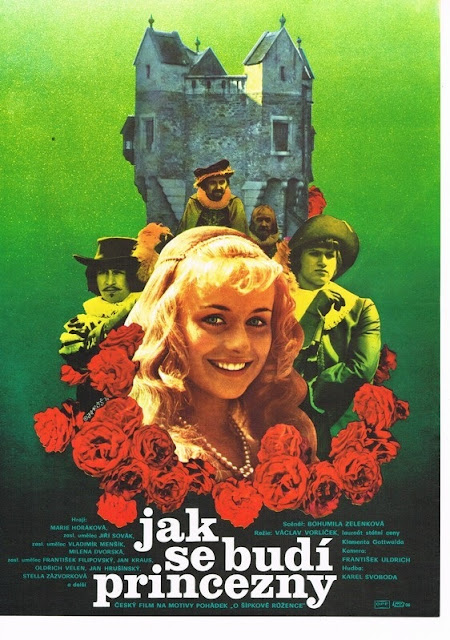 Jak se budí princezny
In a rustic kingdom, there is much rejoicing with the birth of the new princess. The only one unhappy is the Queen's estranged sister, who responds to a friendly royal visit with spite, cursing the newborn child to fall into an eternal slumber along with the kingdom itself, should she ever prick herself. As the Princess Ruzenka grows up, she is studiously watched and guarded by minders, along with everyone else in the valley, with any possible sharp objects removed. This causes her much frustration, but she soon has other things on her mind with the visit of a neighbouring prince... 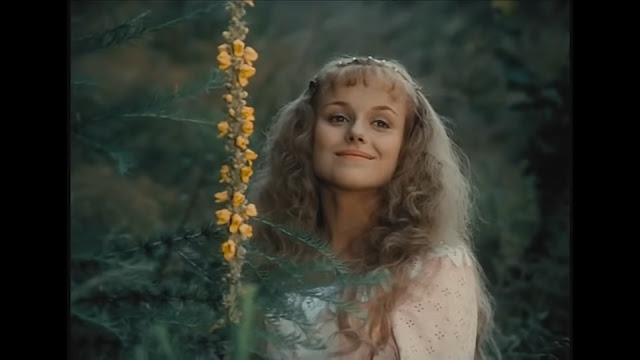 Jak se budí princezny is a retelling of Sleeping Beauty. A charming take on the legend, it tells its story nicely, moving quickly and developing its world well. We get to know how this kingdom operates, how much the people care for their princess, and the lengths they go to to keep her safe. I find it nice how effectively the movie makes getting exposition across funny.
The introductions are all fun, we get some good comedy, and some drama too. The movie mixes all these elements well enough that they mix seamlessly, never becoming too goofy or too serious. One highlight is the 'bear' fight 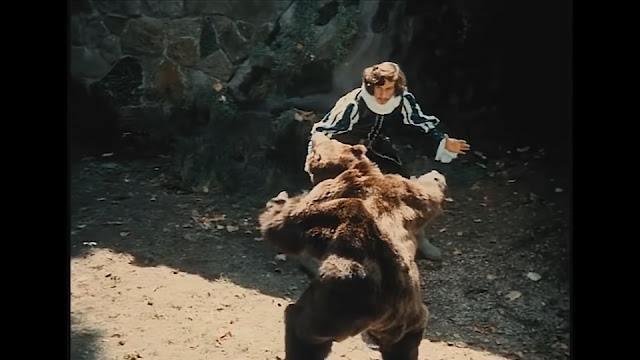 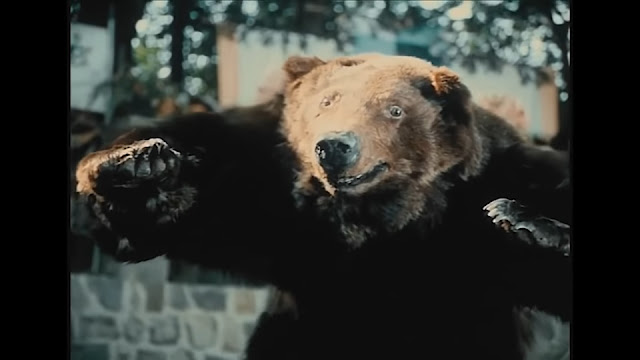 The only drawback to the movie's structure is that it takes a long time for the evil auntie to show up again. On one hand I respect them for not filling the first two acts with unnecessary scenes of villainous mugging, but I would've appreciated at least a little more. The climax itself is a little unsatisfying in how little of a fight she puts up.
Jak se Budi manages to have some really striking imagery, namely when the kingdom is falling asleep. The way everyone's activities get interrupted mid-flow is amusing and distinct, and it looks great when the immense thorn bushes begin to grow everywhere, and the castle is overtaken, like in a primeval wood. 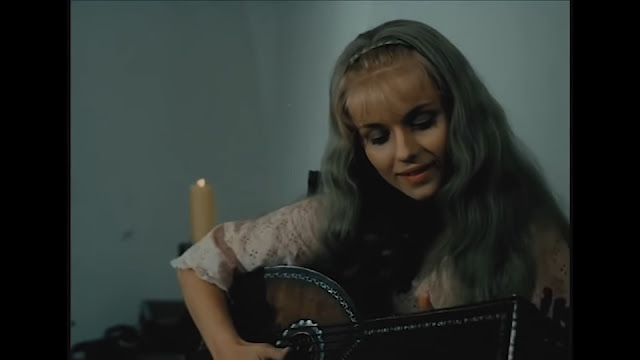 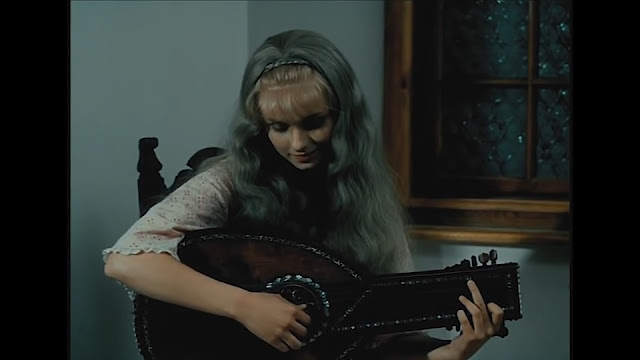 I liked the characters here. Since she doesn't fall asleep till the hour mark, this gives plenty of time for Ruzenka's character to develop, but such is the writing that it could've happened after only 10 or 20 mins and she'd still be a richly developed heroine. This is evident when Prince Jiri proposes to her, and she flat out says, in front of everyone, "I can't. I'm sorry, but I don't like you." No preamble, just cold hard truth!
The romantic prince Jaroslav is a good hero. Nervous and not big on self confidence, but willing to do the right thing no matter what, and to   His royal companion Matej is an amusing comic relief character, and contributes plenty to the story. 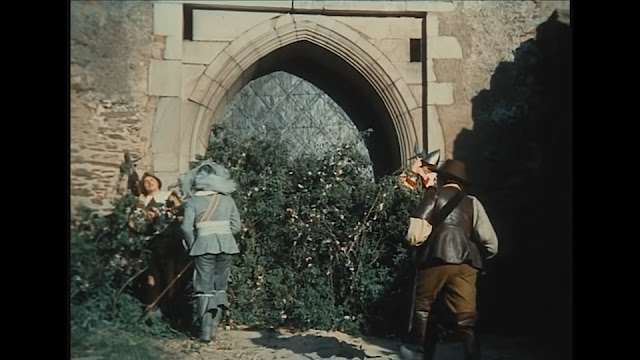 Jaoslav's arrogant brother Jiri is a hoot! The writing combined with the actor's performance does a great job of making him an unlikeably toff, but in an amusing way. A sickly child all his life, he was coddled by his parents so much that he now believes himself to be superhuman, even insisting on such ludicrous demands as fighting bears. He's been shielded so much from any criticism or defeat that when Ruzenka rejects him he suddenly becomes all defensive, like 'How dare she say this to me, when I used to be such a sick person!'. My only complaint is that we never really see a comeuppance or resolution for him, or the equally toffee-nosed parents.
The villainous aunt is decent in her role, but really doesn't appear enough, and has no-one to bounce off of, so her part in the last act feels a bit shortchanged, like she doesn't actually have anything to do but prance about in a crown, then think 'Oh shit' when the cavalry comes. 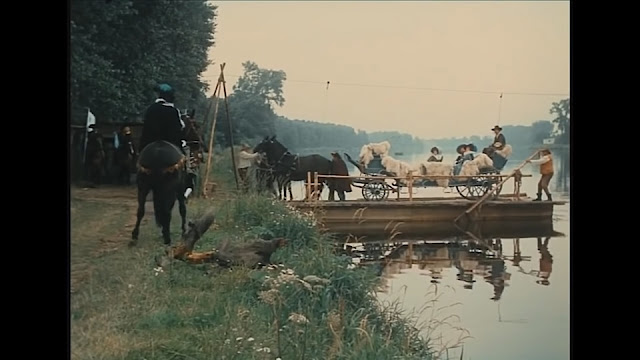 The location in Princezny is superb! Contrasting nicely with the wintery feel to Popelku, this takes place in a lush verdant kingdom, with lots of nice plants, and old cobblestoned buildings. Living in Europe has its benefits, and close proximity to such old buildings is one of the best! Certainly a boon to filmmakers everywhere.
As for the effects, thy are quite good too. This isn't really an effects heavy story, but what there is looks good. 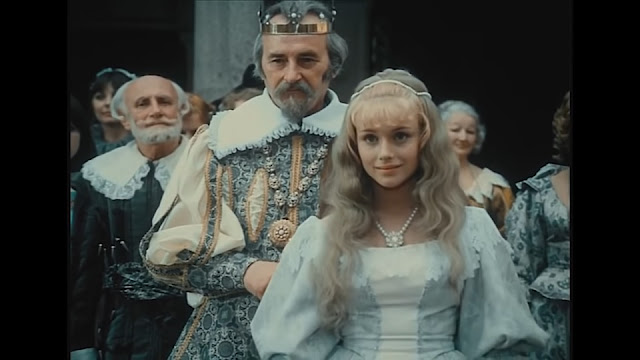 To finish, both Three Hazelnuts for Cinderella and How to Wake Up Princesses are not only perfect examples of Czechoslovakian cinema, but great fantasy films in their own right, ranking among some of the best fairy tale representations I've seen...
Posted by Chris at 7:19 AM