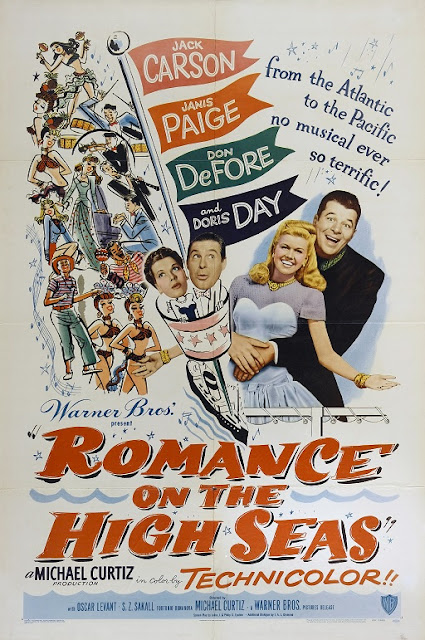 Mrs. Elvira Kent is a frustrated wife who's suspicious of her husband's fidelity. One day she comes up with a clever plan, and hires local broke singer Georgia Garrett to go on a cruise trip in her place, so Elvira can stay in New York and spy on her now-alone husband. While on the boat, Georgia is instructed to keep a low profile, especially among the other sex, but finds it hard when she falls for another passenger-A private detective hired by Mr. Kent to watch his wife... 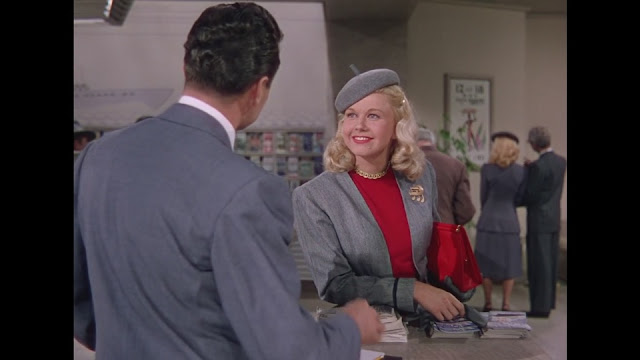 Romance on the High Seas is Doris Day's film debut, and it's certainly a spectacular one! I thought for sure this'd just be a supporting or minor role, especially when seeing her get fourth billing, but she's actually the lead! She comes onto the silver screen fully formed, every bit the wonderful singer and actress she would soon become famous as.
The movie is your typical romantic-comedy of misunderstandings and mistrust, leading to many great scenes. The main conceit is a neat one, and delivered in a very presentable way. The first act introduces us to Michael and Elvira Kent and their marital woes, namely the fact that the dope keeps accepting work on his anniversary three times in a row! She comes up with her plan after meeting the down-on-her-luck singer Georgia, who's often going into travel agencies to book fake holidays, just for fun 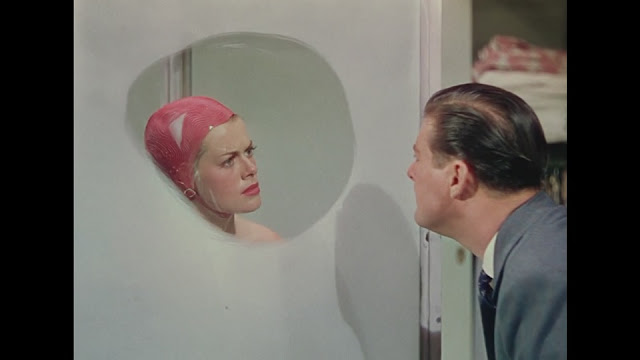 From here on all the action moves onto the boat, and this does mean we get a big focus on Georgia, and private eye Peter, but the problem is the complete disappearance of Elvira and Michael! They were the main characters  but the film is no longer about them. They barely factor into it. It's like the movie spent the better part of 20 minutes just setting up window dressing for the real attraction. I'll say this though, once they do finally show up again in the last 20 minutes, it feels fairly seamless. So even though the midsection really coulda used them, it's not a total bust by any means.
The cast make the picture. Sunny and coarse-languaged (for the 1940s, that is), Georgia is a fun and endearing lead, and we get to see her enjoying herself, in love, feeling pissed off, etc. The whole range. Peter is a good love interest, and his conflict with his job and his emotions are well-handled. Georgia's nightclub managar Oscar has a decent role, and is a neat presence. I like that he's not portrayed as an unreasonable asshole, even if he's perhaps a touch too enthusiastic. I also dig that as soon as she gets the chance, Georgia tells him everything! There is little awkwardness or misunderstandings here, as she takes things into her hands very well. 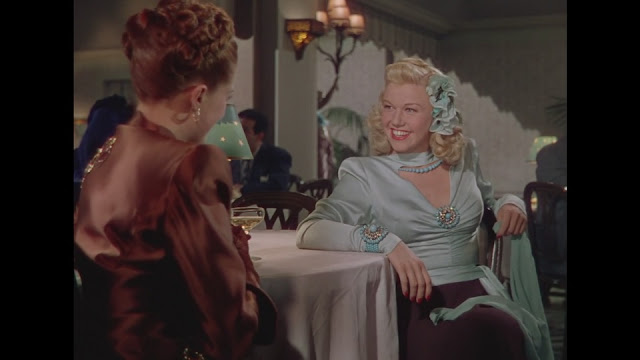 The Kents are both funny in their own ways, and it would've been great seeing more of Elvira's spying, as well as learning if that vixen of a secretary really did just have the filing in mind. The pair's Hungarian uncle is a great addition too.
The dialogue here is often funny, with  great lines like "Listen, I didn't come all the way here and spend all your money to pretend I don't know you". The comedy setpieces are good too, including a funny drinking exchange later on, where Peter and Oscar manage to get shitfaced all without having a single drop of booze. 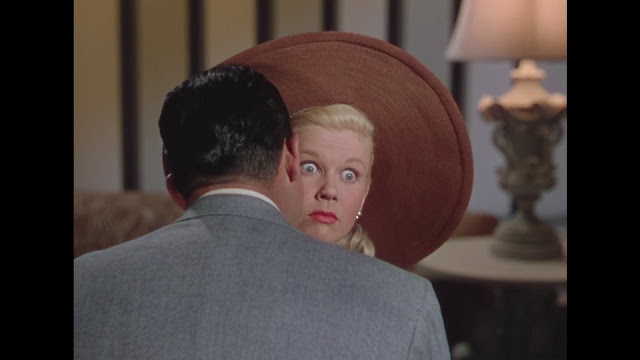 The actors do a great job. Day is a mesmerising first-time actress. Jack Carson is t oughguy who's also a gopeless romantic. Don DeFore and Janis Paige are an entertaining pair, and S.Z. Szakall is always a great presence. Some scenes are amusingly filmic, like how characters will light cigarettes only to immediately discard them. And the bastards throw 'em overboard too! Thank goodness it's only a movie set, you litterbugs!
The music here is lovely! We get memorable tracks like It's Magic, and the lengthily titled but no less stellar Put 'em in a Box, Tie 'em with a Ribbon, and Throw 'em in the Deep Blue Sea. Other tracks I didn't like so much, including the slightly unbearable I'm in Love song, but there's nothing terrible. 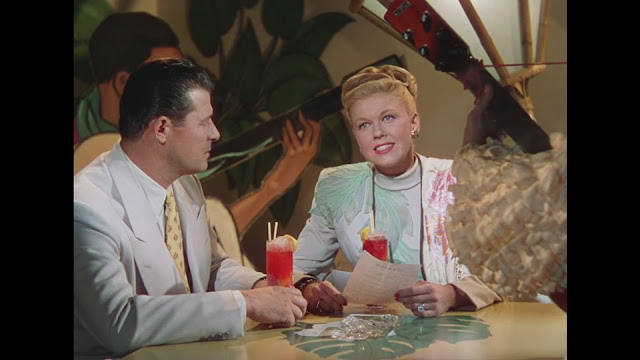 Romance on the High Seas succeeds well in its aim of showing us the tropics, with island locations like Cuba and Trinidad being represented well. For all the attention it gives them though, it really skimps on showing off Rio. We're in hotel rooms the whole time, and never actually see the country. It is a shame, but at least the movie isn't trying to showcase Brazil, the finale just happens to be set there.
The movie looks very lush overall, with beautiful colours and lighting, nifty (and ridiculous) fashion, as well as neat sets. 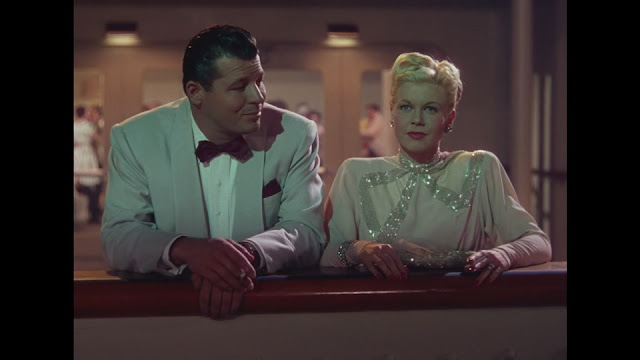 Romance on the High Seas is a perfect introduction to Doris Day, and established her to the world as someone to keep an eye on. Even all these years later it's a great flick to watch...
Posted by Chris at 7:12 AM