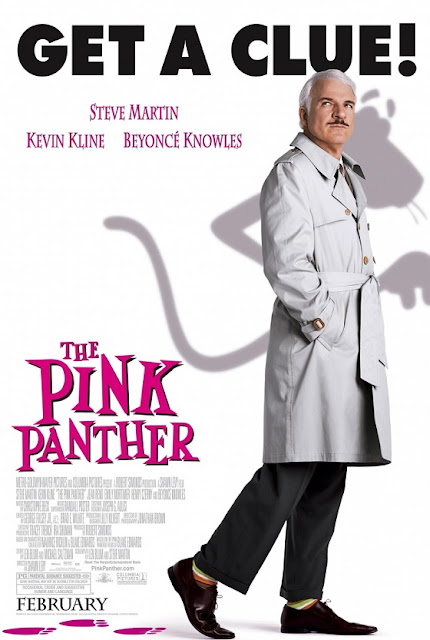 During the climactic end of a world-stage soccer match, famous referee Yves Gluant is murdered, and his trophy-The famous Pink Panther diamond-is missing. The conniving Chief Commissioner Dreyfus of the Surete wants all the glory of the capture to himself, and so assigns a complete nincompoop to distract everyone while he solves the crime. However, the newly minted Inspector Clouseau may be far more than he, the murderer, or France itself bargained for...

Remaking classics is always considered a no-no, but that has never stopped studios in need of a fast and easy paycheck. Despite never working, and always being received negatively, still they try. Such was the case with the 2006 remake of The Pink Panther. 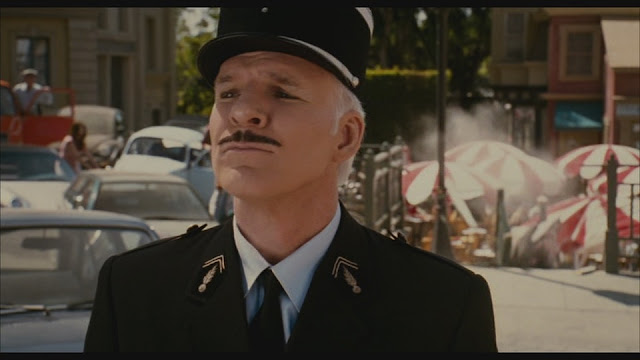 This is a pretty groanworthy movie. While not technically terrible, and certainly well made, Pink Panther '06 is just like every other American Hollywood movie from the 2000s. Nothing distinctive, the gags all come a mile away, and all in all it feels like a weak imitation of the classics, at best. That's to summarise it quickly, but lets go into further detail.

The story is quite a good one, adding in a nice juicy murder to spice things up. This could threaten to overtake the theft of the diamond, and in some ways it does, but overall I appreciate the general story. Thought has been put into the mystery, and while it's nothing to write home about (half the suspects die, and the culprit barely appears anyway), it's still fun seeing how it all wraps up. As far as mysteries go it's not bad. 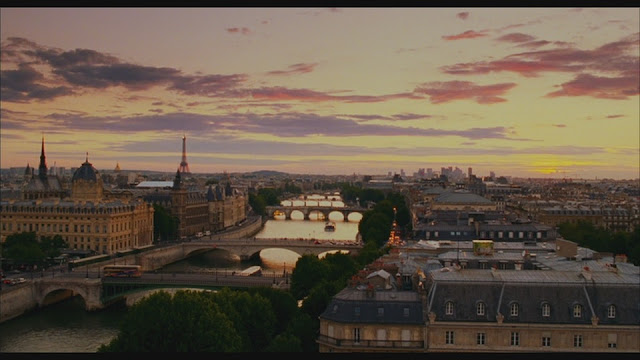 Then here are the characters. Inspector Clouseau is an annoying oaf, who makes many scenes a chore to watch. He has his moments, but for the most part the audience will be driven just as crazy as Dreyfus! He is given moments of sensitivity that the Sellers iteration never got, and these aren't half-bad, and help make him semi-likeable at times. Ponton is a noble sidekick, who takes Clouseau seriously, despite being more self-aware then him. Nicole is a cute enough love interest. Dreyfus here is your typical angry boss. He hasn't quite graduated to "KILL CLOUSEAU!" territory, and is characterised differently than the original, but there's nothing wrong with him. 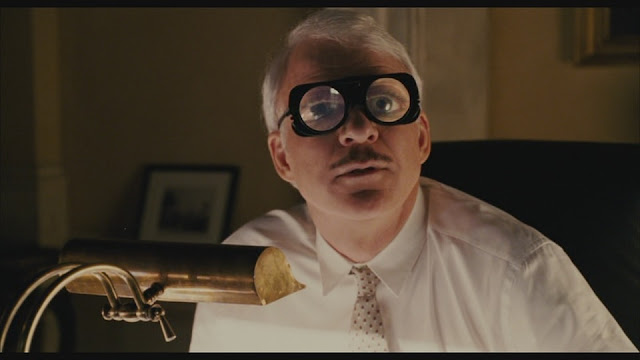 A few of the jokes are pretty good. Liable to go on for a bit too long here and there, but aren't terrible (the vase sequence was my favourite). The first few curtain bits didn't impress me that much, but the payoff with Dreyfus was great! It was almost worth every awkward 'weather' line. Other gags have good payoffs too, so the movie isn't a complete failure as a comedy.
One last thing to discuss about the humour is the overall tone. Due to the studio and creative team, this is a very American film, and I feel that's one of its biggest drawbacks. The originals were quintessentially British, with use of more subtle humour (besides the slapstick, that is). Americans though are notorious for being as unsubtle as a bull in a china shop, overplaying everything, and dialing the film to 11, not to mention adding in tons of sex and fart jokes. *sigh* It's taken to such a degree here that Clouseau simply hitting a pop-up somehow strips Paris of all its power, and one tap leaking manages to completely cave in a hotel room in 5 minutes. 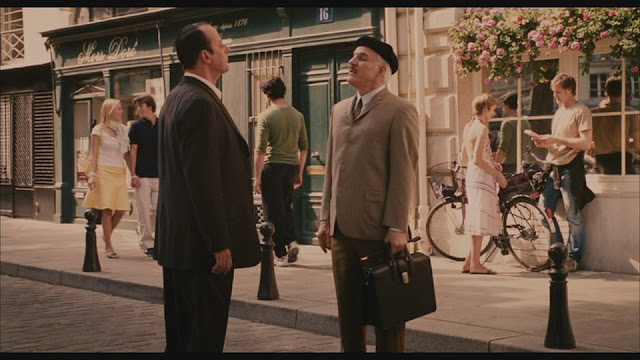 I also didn't get how the airport scene caused so much trouble for Clouseau. All it is is a minor gaffe, yet it somehow brings shame to all of France, and gets him off the case. What really doesn't make sense is why he doesn't just say he's a cop, since that's one of the few occupations that would allow you to carry deadly weapons from one country to another
To end on a positive, one scene I really liked was the encounter with the secret agent in the casino. I dug how despite his normal idiocy, Clouseau is instantly able to spot this operative, and said agent treats him with respect too! 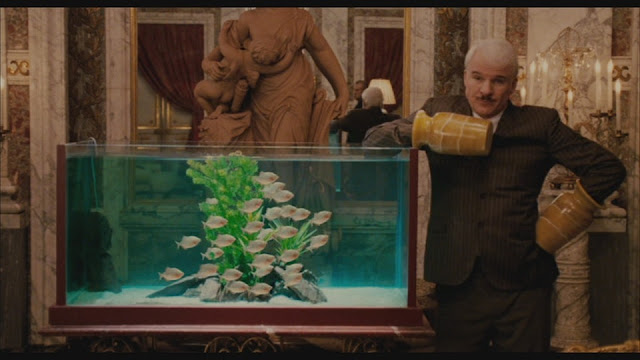 The music here is very nice. Some tracks are a bit overblown or modernised (and I probably could've done without the cloying tracks meant to tell us when to feel sad), but many still feature that quintessential 60s Parisian feel. And the rendition of the main theme is mercifully untouched. The big song that Beyonce gets isn't half bad, sounding kinda like a James Bond theme in some ways.
The animated sequence that begins the movie is pretty funny, and done in the classic art style. No awkward 3D rubbish, or unfortunate attempts to update it to be more 'hip'. Just a good old cartoon like the old films! The city of France is shown off very nicely too, with good direction all round. 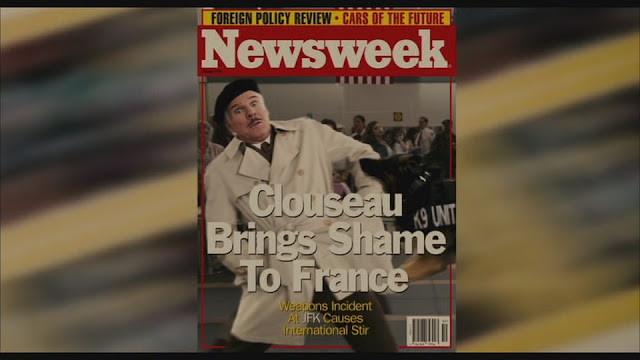 The acting here is alright. Steve Martin is a great actor, though annoying to some on occasion (*raises hand*), but here he was perhaps not the best choice. He does try and differentiate his portrayal of Clouseau from Peter Sellers, and really make the character his own. On that level he succeeds, but his idea of the character is just not one I find all that funny.
Kevin Kline is good in his role, even if I don't buy his character as Dreyfus. Emily Mortimer meanwhile is cute as a button. The only actual Frenchman on the cast, Jean Reno is fun as Cato-lite sidekick Ponton. Perhaps most unwelcome in a Pink Panther movie is American hip-hop singer Beyonce, but she doesn't do a terrible job, and by the end I didn't entirely begrudge her appearance.
Other actors include Jason Statham in a cameo role as the murder victim (thank God we didn't get his attempt at a French accent!), Roger Rees, and a fun but annoyingly monotone Clive Owens as a 007 parody. 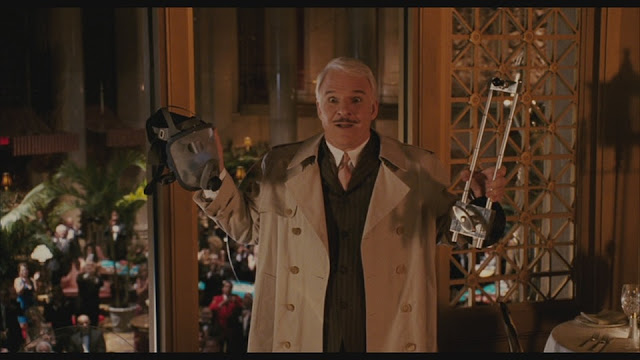 Overall, this update of The Pink Panther isn't entirely irredeemable, but it's just lame, and there are many other things you'd be better off watching... 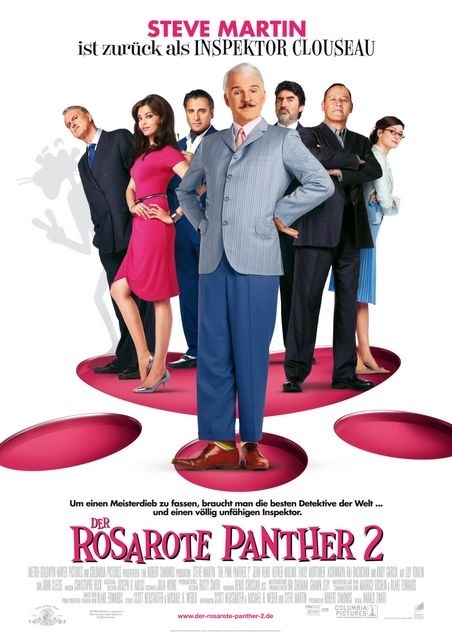 
The world has been rocked by a series of high-profile thefts, from Italy, to Japan, and England. An international dream team is assembled, to be headed by the great inspector Clouseau, and no sooner than they're ready, the Pink Panther diamond is stolen again. Clouseau frequently clashes with the dream team, as well as navigating his own fraught love life, but strives to retrieve the diamond, and stop the crime spree of Il Tornado... 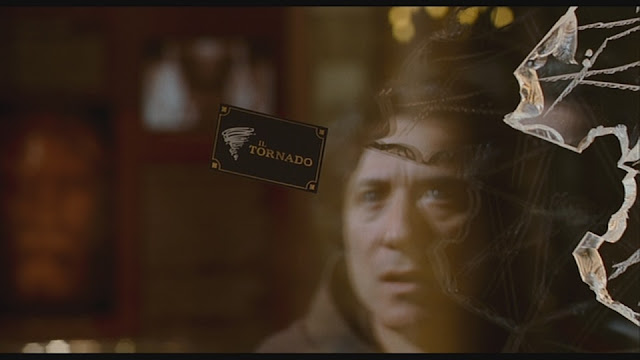 The Pink Panther 2 is a marked improvement over its predecessor! It tells a better story, and one that hearkens back to the past in a good way, while still keeping things fresh. It also earns points by giving Clouseau some competency. He's still a dope, but quite an ingenious dope, and you do buy how he's able to work everything out and save the day. 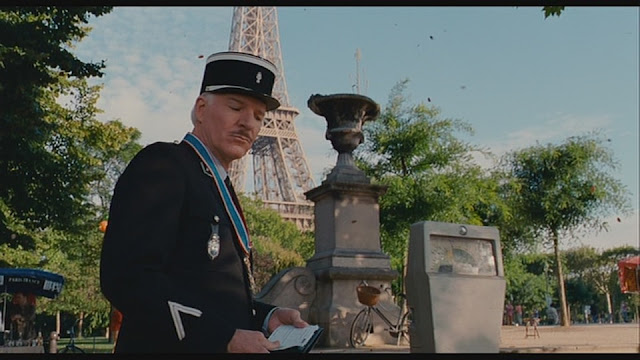 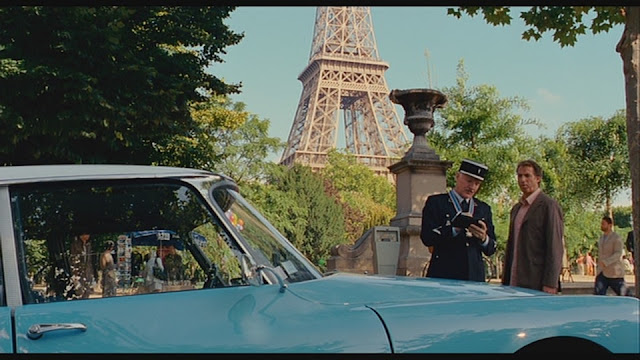 The sense of humour here is much the same as the last, which tells you everything you need to know, but there are changes and improvements. Much fewer crude sex jokes for a start! Not all are perfect though. For all its improvements, the movie has still got unfunny and cringey moments, or occasions where they repeat the joke, as if we were too deaf or stupid to get it the last time. 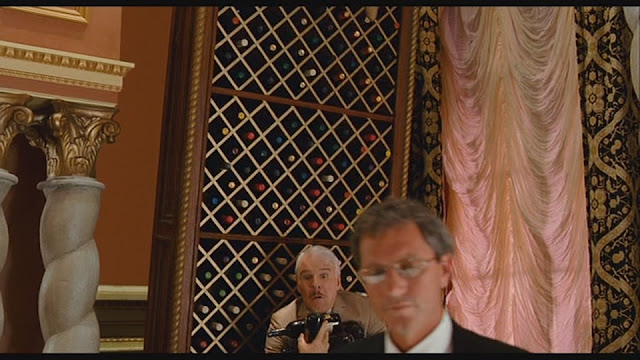 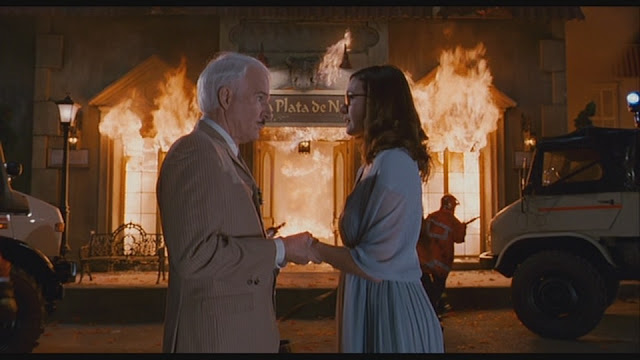 As for the gags, they're a highlight. To pick an example, the chaotic restaurant date was surprisingly pretty good! At first it just seems like Clouseau's gonna tip over a wine shelf, but it turns out into a really well orchestrated juggling act with the whole restaurant, and not one bottle gets smashed! It's pretty darn impressive! The shenanigans after kinda spoiled the moment a little, since it was already perfect, but that's not a huge deal or anything. 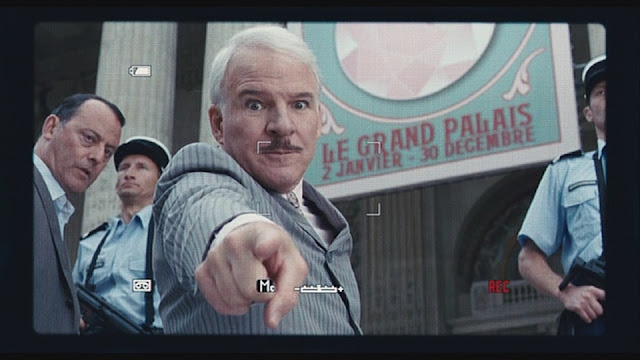 Where the movie shows some weakness is the plot. I quite liked the story itself, but it's constantly undercut by the frequent comedy setpieces. The entire Rome scene is entirely pointless for the plot, and just wastes time (precisely because so little time is spent on it), as does the frequent political correctness meetings, and most frustratingly, the awkward romance! Despite having presumably gotten together in the last movie, Clouseau and Nicole are back to brainlessly fawning over each-other like nothing happened, before getting actively catty. 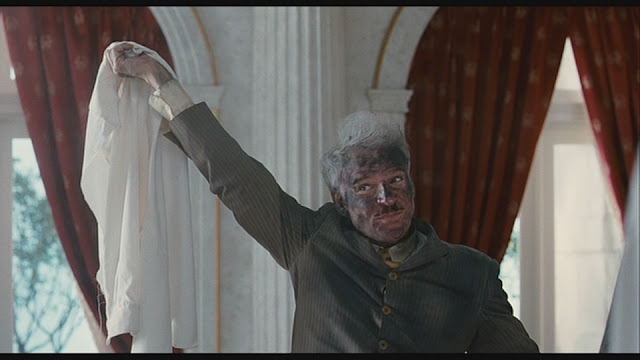 The presence of the original Tornado, and disgraced art dealer Alonso Avellaneda confused me more than anything. For years he's thought to be the Tornado, and is built up big, but he's not the Tornado. Instead it's just some random other guy who gets one scene before unceremoniously dying offscreen. I don't see why these two characters couldn't have been combined, because Avellaneda completely vanishes from the plot, never seen or heard from again, while the actual original is a wasted opportunity. It feels like there was a whole other plot the movie could have explored, but didn't bother to.
The mystery here isn't half bad. The culprit is pretty obvious, but how we come to the solution is fun, and there are a few twists and turns here you're not likely to see coming! They rank as some of my favourite moments in the film. This culminates in a finale that's pretty enjoyable, and surprisingly well thought-out! 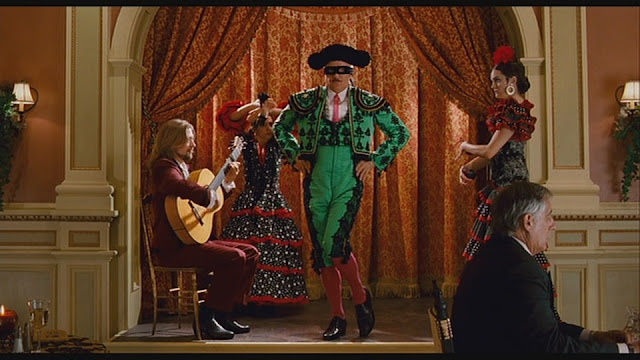 Back to the negatives, something that really annoyed me was that despite eliminating the character of Cato entirely, due to fears of him being offensive (bullshit!), this film includes a line where Clouseau casually calls the Japanese detective yellow! I can't help but worry the filmmakers are trying to apologize for and one-up the old series by showing how much more progressive they are...Not realising it was an intentional joke in those older films too! Also this is probably a nitpick, but the word Yellow only bothers English Asians. Asian Asians couldn't give a damn, and probably wouldn't know what you're talking about. In summation, by trying to make the joke palatable for today's audience, they actually overdo it and make Clouseau here a genuine racist, when all he was in the original was an inappropriate doofus. 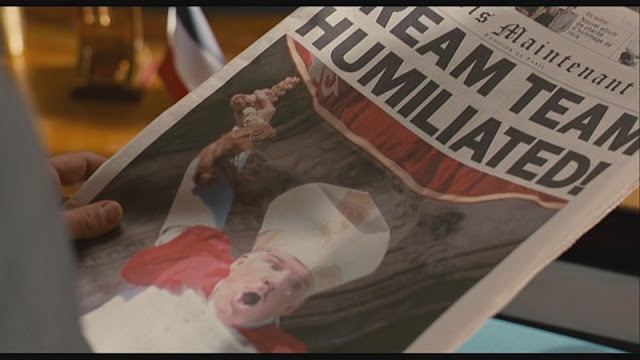 The cast here is an impressive one, and they all do decent enough jobs. Steve Martin is a little more mellow this time, thankfully, though if you didn't like him the first time round, you won't here. The remainder of the returning cast members are all fine. Replacing Kevin Kline as Dreyfus is John Cleese. While recasting anyone with such a famous face makes it all the more noticeable, and Cleese is such an obvious choice for this kind of role, he does a predictably fine job. The trifecta of Alfred Molina, Andy Garcia, and Yuki Matsuzaki (from The Black Ninja!! Wow, nice to see his career going places!) all do fun jobs, in different and distinct ways. Lily Tomlin is enjoyable even if her character is annoying, and Aishwarya is a sexy and seductive presence, who has fun in the climax. 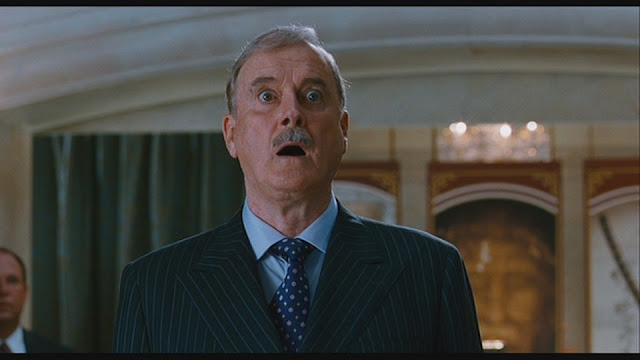 The direction here is perfectly fine, as with the last entry. The shenanigans are shot well, even if they don't entertain, and Paris is gorgeous as usual. Though it would have been nice seeing more of the other countries the movie jets to. 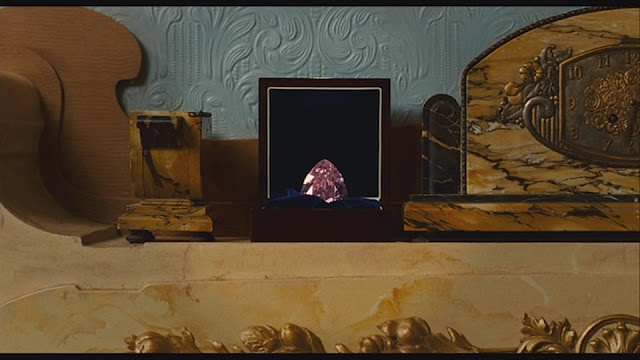 In need of a better title, The Pink Panther 2 is a tolerable entry in the series, and I'd say is worth a watch in its own right, if not as a real Pink Panther movie. To date it's the final end of the franchise as a whole, lest we get yet another remake in the future, God forbid. But if that terrible outcome did happen, seeing it take at least a little inspiration from this film isn't the worst crime it could do...
Posted by Chris at 6:55 AM