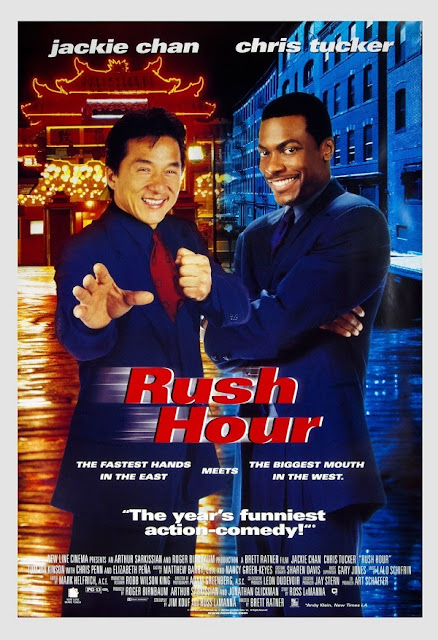 Hong Kong policeman Inspector Lee has all but crushed the vast criminal organisation Juntao, but its enigmatic leader has managed to escape, and some months later kidnaps the daughter of the Chinese Consul Han in revenge. With the incident happening on American soil, the FBI try and take full responsibility of the investigation, ignoring Han's wishes for his friend Lee to be brought over, and in an effort to keep Lee out of their investigation, they employ the immature LAPD detective James Carter to 'babysit' him until everything blows over. This quickly fails, and the two clashing detectives soon find themselves on the trail to rescuing the girl... 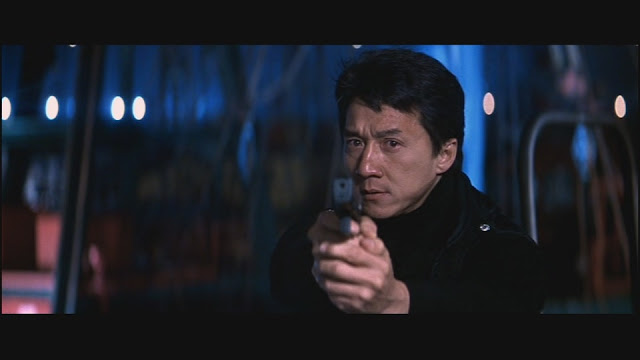 Its somewhat non-indicative (but perfectly memorable) title aside, Rush Hour is an entertaining crime-comedy. While its quite mature plot could run the risk of being too serious for a humorous film, it manages to find a good balance, with the dramatic elements serving the story well and informing the character motivations. The comedy rarely intrudes on the serious moments, so the tone doesn't feel all over the place. 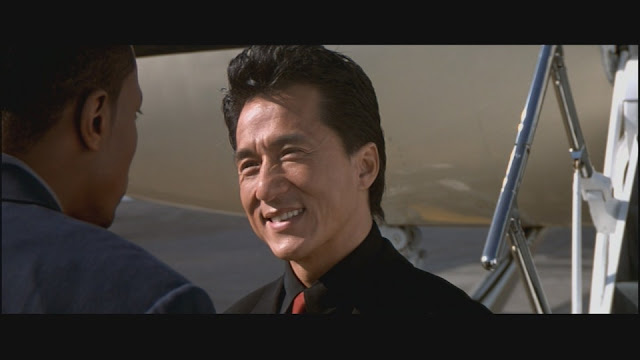 The story gets off to a great start, introducing everything and everyone effectively, as well as the personalities of the two main characters. They couldn't be more different, and because of this share great chemistry, and carry the film perfectly as it moves along from one comedy or action setpiece to the next

Some examples of the great moments on display here are Lee's failed attempts at fitting in at a black club, the Hollywood chase, Lee learning American procedure, and the whole final encounter. On that note, it's my personal theory that all the artifacts at that gala were all imitations made for the event, otherwise it's an anthropological tragedy! Still, it makes for funny action antics! 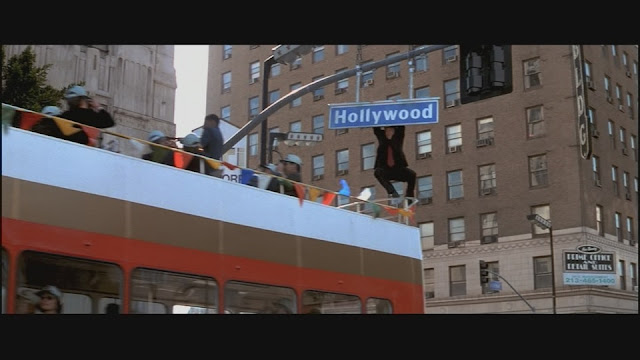 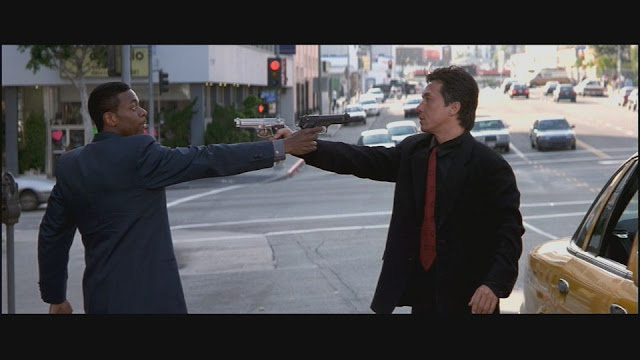 The villains here are neat. The Juntao organisation's lieutenant Sang gets the most screentime, being the face of the organisation, if not the man behind the curtain. As for the ultimate villain, the reveal might not be the most shocking in the wold, but it's effective, and the character does well in both guises.
The supporting cast are equally good. Soo Yung is adorable and hilarious! It's a shame we never see her from her kidnapping to the climax. Her father is likeable, and a good friend, getting across plenty of emotions. The FBI agents are amusing and officious assholes, without being in-your-face about it. And lastly, Carter's associates (from fellow cops to criminal associates) are an entertaining bunch. And they all serve a purpose for the story, too. no scene or character feels unnecessary. 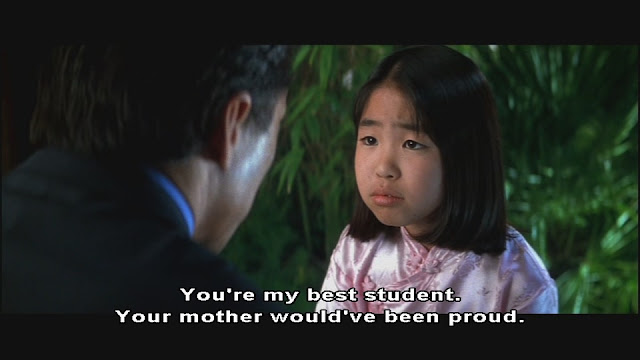 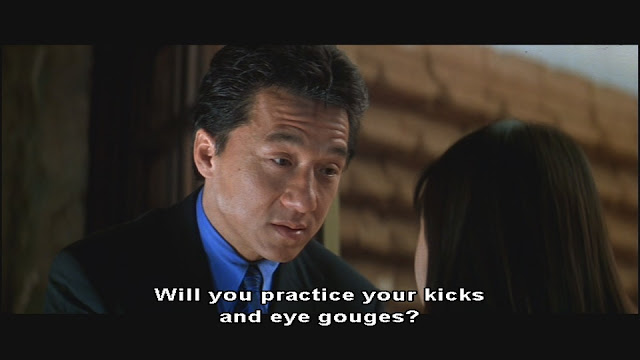 The action here is great! There's plenty of martial arts, gunfights, and other kinds of action, including Jackie's trademark fighting style of using every random object around him as a weapon (to which I saw at certain scenes, Owwww!!). Chris Tucker gets his chances to shine too, more from his character's lack of fighting talent. He's a competent opponent, just hopelessly outmatched against kung fu artists, especially dozens of them. It's hilarious seeing him trying but failing to deal with them. And I very much appreciate that he's the one to fight and defeat Sang. 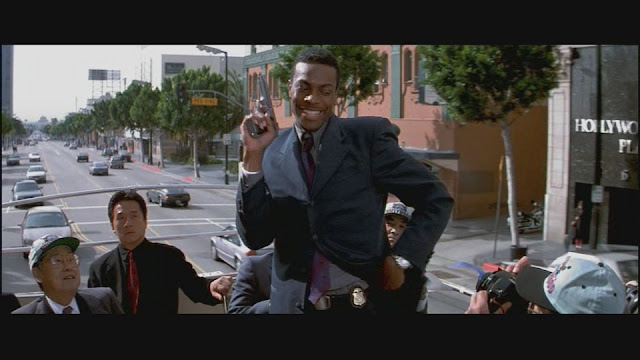 The score in Rush Hour is a nice one! There are good action beats, a nice Oriental meets western crime mix, and some decent hip hop. Considering my feelings towards that genre, it's always good when I can watch a film containing hip hop without wanting to wear earplugs, so this gets credit from me! 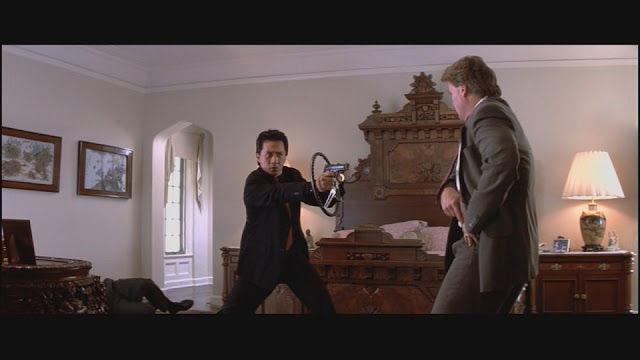 Chris Tucker is one of those divisive actors where some might find his manic, loud, high-pitched performance endearing or obnoxious. As for me I find him plenty of fun! Maybe it wouldn't work for every actor out there, but it does for him. He is thankfully never annoying, even if you do want to slap his character around on occasion. Jackie Chan is charming, adorable as well as super talented, getting to show off his moves very well. Tzi Ma gives a good performance as Consul Han, and Julia Hsu is lovely as Soo-Yung, despite her limited screentime. Everyone else, from Elizabeth Peña, to Chris Penn, Ken Leung, and Tom Wilkinson, etc. 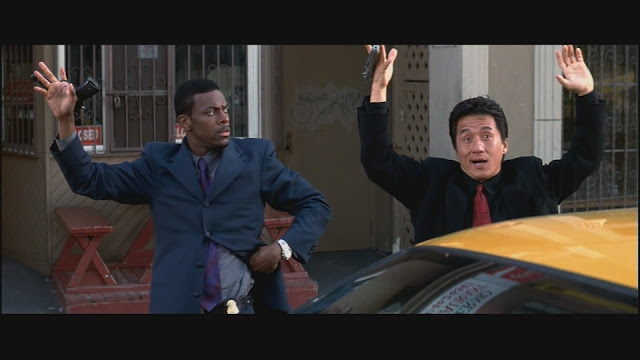 Overall, Rush Hour is a harmless good time. Fun, silly in all the best ways, with plenty of laughs and fun action...
Rush Hour 2 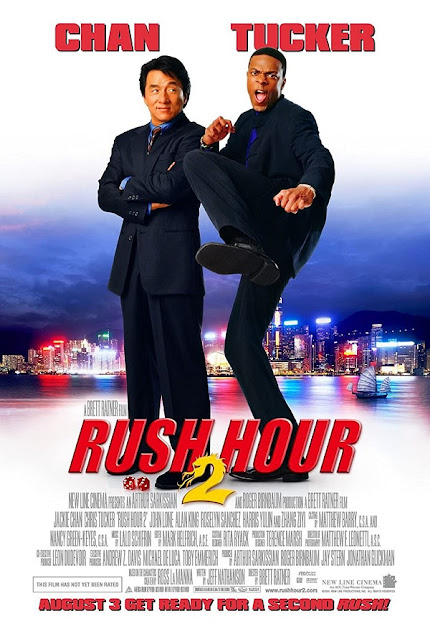 Detective James Carter is on vacation with his friend Inspector Lee in Hong Kong, but is far from enjoying himself since Lee keeps taking on new cases. This eventually culminates in him investigating the death of two U.S. translators, who turn out to be undercover customs agents. Lee suspects the Triad gang leader Ricky Tan of being involved, but he's seemingly killed by his villainous lieutenant Hu Li, and Lee is thrown off the case by furious U.S. federal agents. Despite this, he and Carter find more clues and travel back to America to uncover the truth behind the conspiracy... 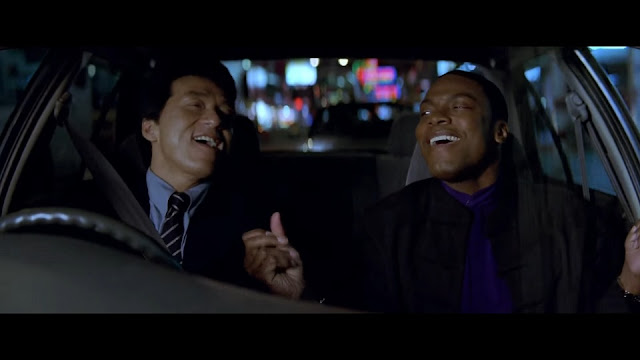 Rush Hour 2 is a prime example of a sequel done right. Not feeling like a mere retread of the first movie, it expands on it, furthers the characters, their backstories and personal journeys, and tells an interesting enough story to stand on its own. Each section of the film is memorable in their own ways, and the dialogue is endlessly quotable. From the nightclub karaoke, to the massage parlour antics, and more, there's always something hilarious going on. 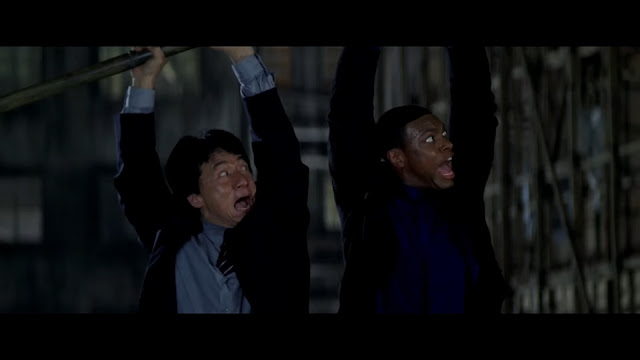 The action in Rush Hour 2 is a lot more enjoyable than the first. I guess it's because 1 had more shootouts, and comedy sparring between Lee and Carter. There were hand-to-hand fights, and kung fu, but in comparison 2 has them in spades. There are many great setpieces, both in choreography, and in direction/visualisation from the building framework climb, to the parlour brawl, and the battle at the casino (bomb search included). 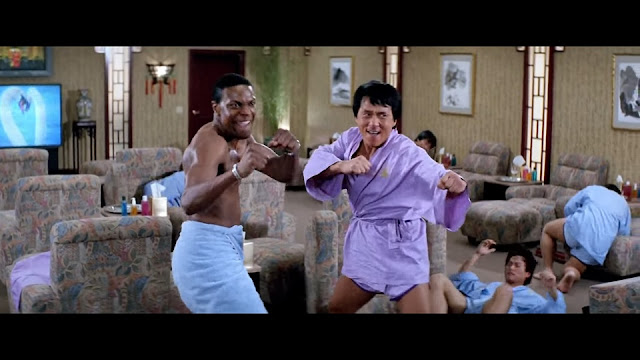 The leads are once again a wonderful pair, with great chemistry! Lee has a well-rounded connection with the story, and the lion's share of serious bits. Carter, meanwhile, gets more flippant moments, but isn't a helpless lump (well, most of the time, anyway), and he's once again the one who gets to take on the tough martial arts lieutenant, which I appreciate! It's like when Johnny Cage took on Goro in Mortal Kombat. Comic relief characters getting the chance to shine as genuinely skilled and competent despite themselves is something I appreciate. 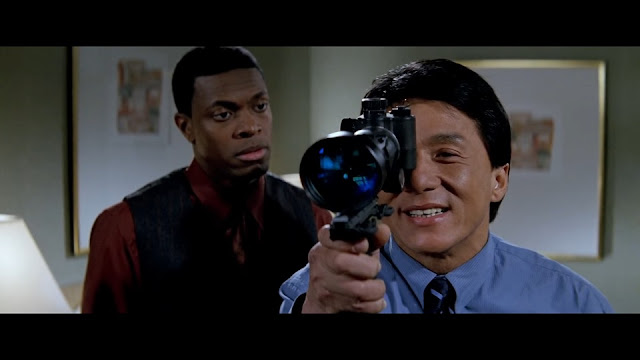 I wouldn't say it's obvious who the main villain is, but it is the dramatically best choice, since such an important character wouldn't stay gone despite being an important element of the hero's past. It's just a shame they disappeared for such a large chunk of the movie. As for Steven Reign, he's ok but likewise vanishes for over a third, and we don't really know anything about him or his motives. Hu Li is the antagonist who gets the most screentime, and it's well deserved, because she is great! Sadistic, tough, and absolutely crazy! 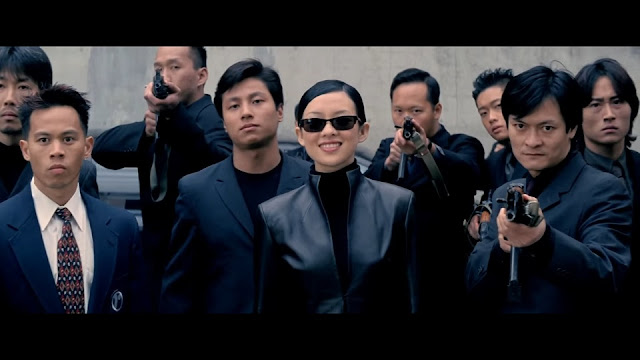 Isabella is a good supporting character but is perhaps not used to her full potential (also, when she tells Carter and Lee that they're officially working for the US secret service, then later asks if they can for real this time always confuses me. I was at a loss in thinking how what they were previously doing was just a distraction). That's not to say I wanted her gone, because she is a great addition to the cast. We just could've done with a bit more of her, is all. The mystery of who she's working for is handled well. Her romance with Lee feels forced in the sense that they don't share many scenes together, or any signs of falling for each-other, but the characters do at least have chemistry, so it's not unbelievable that they'd end up together. 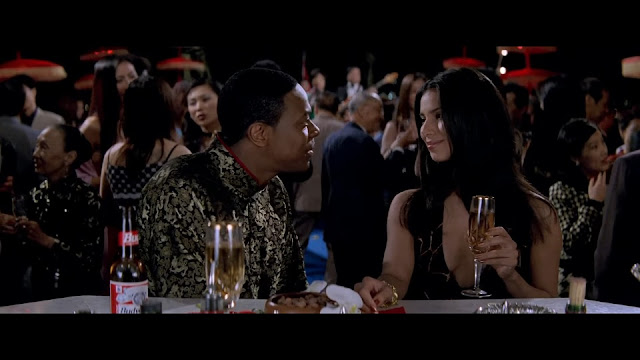 Rush Hour 2 is often hilarious, sometimes from character actions, or by pratfalls, wordplay, or 'I can't believe he just said that!' moments. Some might feel they come across as 'ironic racism' moments, but I disagree. As in the first movie, the bloopers are absolutely hilarious! My favourite by far is definitely the final one, alongside Don Cheadle's bit ("His name is Lee, goddammit!"). 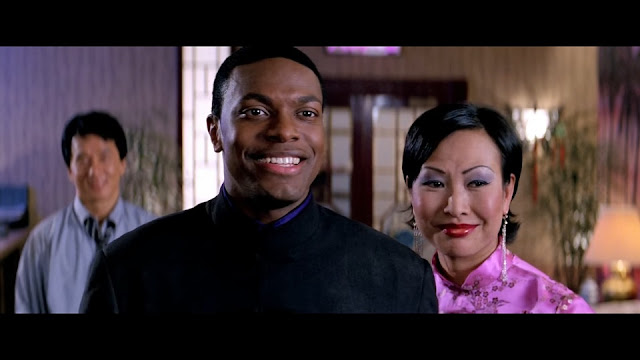 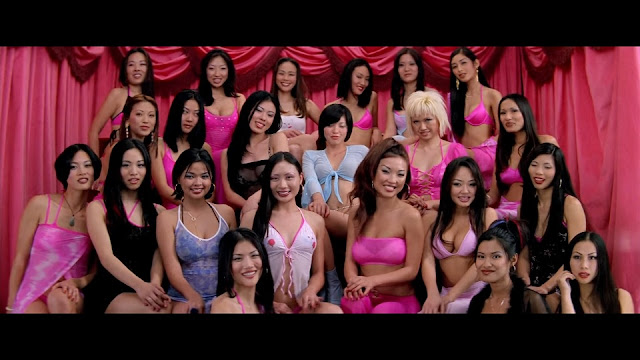 One little problem is that there's a bit of tonal disconnect between Lee and Carter's scenes when the former thinks the latter dead. Lee's scenes are sombre and dramatic, while Carter's are light and funny, and there are times where I'm still grinning from one of those and the movie suddenly cuts to a much more dramatic scene. It's hard to judge, as these scenes are all really well done. 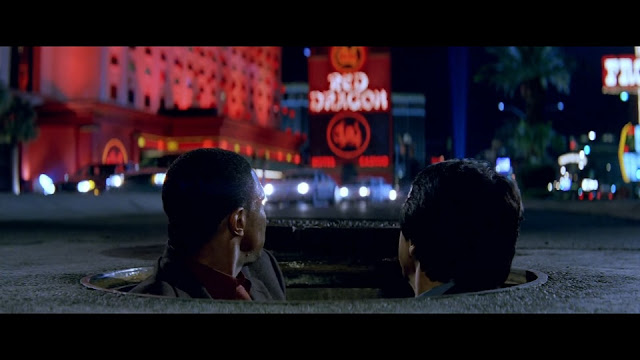 There's also a weird time discrepancy in the climax, with Reign taking simply forever to unlock a safe and the other villain just as long to reach said room. Neither also seem to notice the casino literally exploding under them, which I guess makes sense given they're like 20 stories up, but then again explosions do tend to be quite loud, so... In any case, it's a good sign when the biggest complaints to be had are about things this relatively minor. 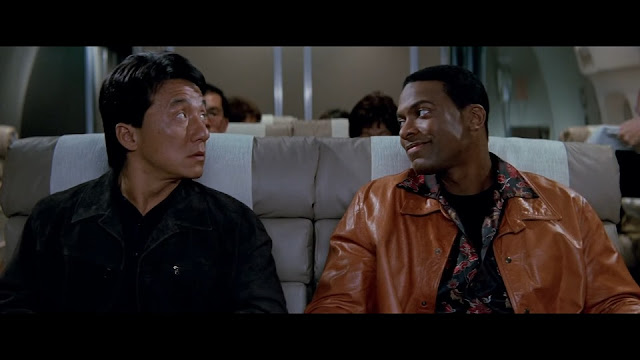 Rush Hour 2 is my favourite in the duology (*cough*), and both movies come recommended from me! They are modern classics, are a great diversion for a rainy day, and a perfect showcase for Jackie Chan and Chris Tucker...
Posted by Chris Hewson at 7:31 AM