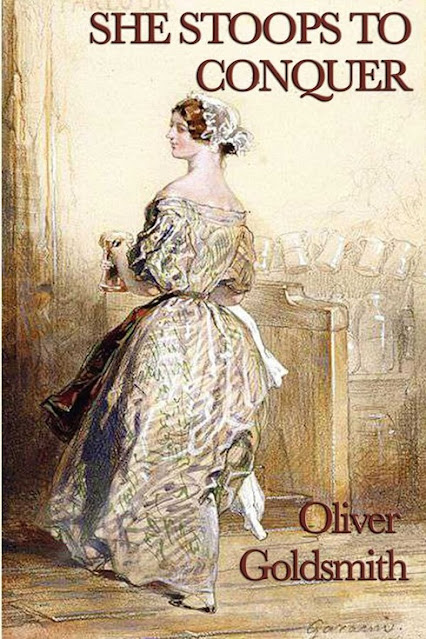 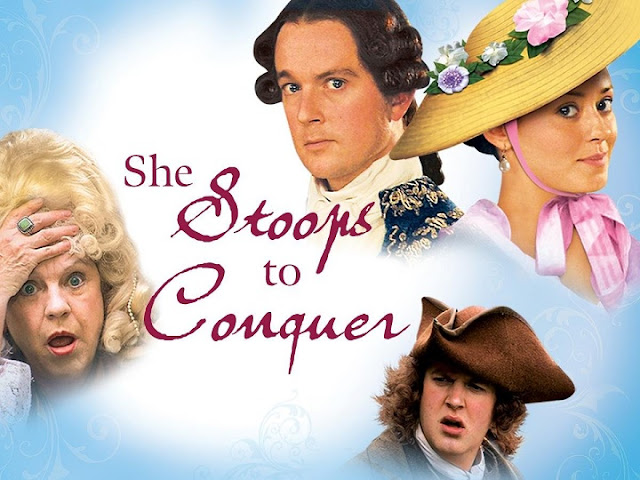 One of the 18th century's most popular British plays, She Stoops to Conquer is a quintessential comedy of errors, and is still fondly remembered and performed to this day. In 2008 it received a TV adaption, and while it's not the most well known or popular of productions, I was a faithful viewer on its release. I didn't see the whole thing, only bits and pieces, before catching the last few episodes in full, but it still managed to catch my interest. All these years later I still have fond memories, and decided it was high time to watch it again!... 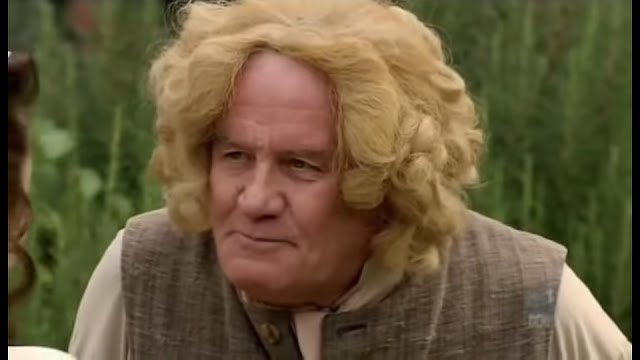 Eligible young bachelor Charles Marlow has been invited to the country estate of a family friend to meet his daughter Kate. Trouble ensues however when Mr. Hardcastle's mischievous son Tony decides to play a trick on his guest, leading Marlow to believe he's stopped off at an inn. Mr. Hardcastle grows increasingly outraged at the perceived impertinence, while Kate admires Charles, but decides some plotting and scheming of her own is in order if she wants him to break free from his shyness around women... 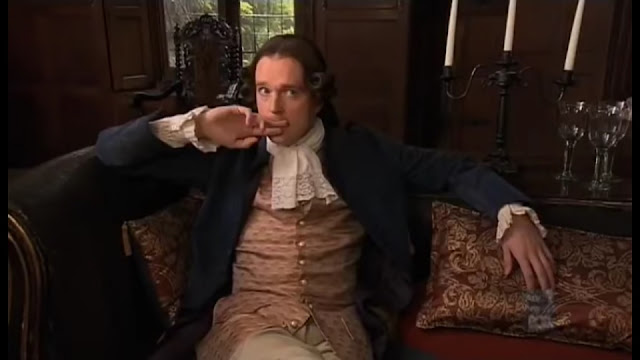 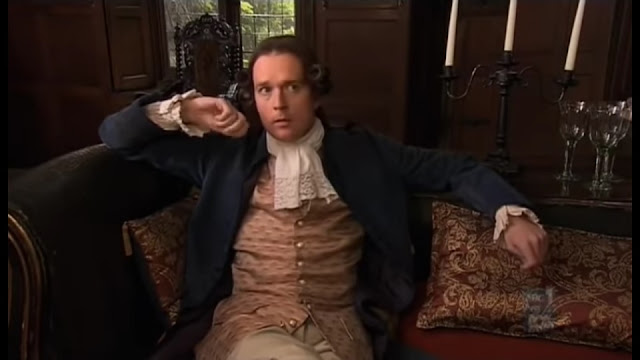 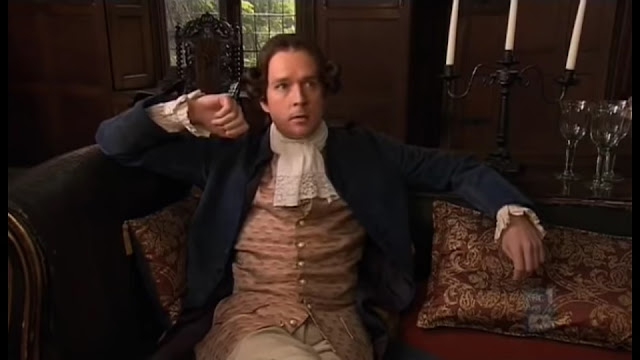 She Stoops to Conquer is a very enjoyable miniseries. Turning the romantic conventions of the day on their head, it has a lot of fun with these kooky characters and their woes, while also being a good romance in its own right. The plot is in a sense like a proto-P.G. Wodehouse adventure. Misunderstandings and shenanigans at a country estate. It's just elaborate enough to be funny, and not so much to be confusing. 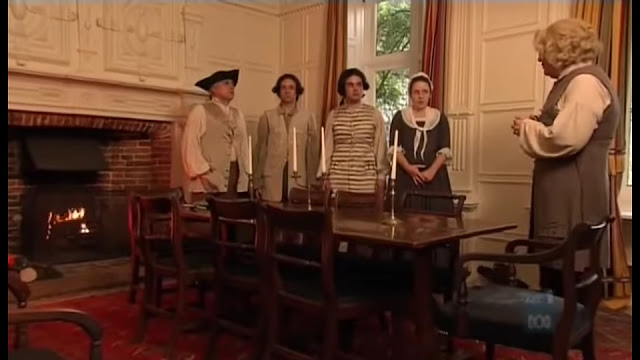 The characters are a rich and entertaining bunch. Marlow is self-assured and confident among men and 'lower' women (i.e. maids, bartenders, etc), but among women of his own status he is a helpless lamb, barely able to speak. Kate meanwhile is plucky and resourceful. She likes the sound of Marlow, and likes the look of him even more, but upon hearing of his timidity, she becomes resolved to bringing him out of it with a little handy subterfuge.
Marlow's friend George Hastings is stuck with his own romantic dilemma, alongside Kate's cousin Constance. The duo have their own problems to deal with, from a domineering aunt, to a hidden family inheritance. Hardcastle heir Tony Lumpkin is an amusing rascal, responsible for much of the story's strife, but never comes off as unlikeable. He has moments of reflection too, that make him more three-dimensional.
The remainder of the cast are all memorable and jovial, namely Mr. Hardcastle and the hilarious 'monstrosity' on his head,
My complaints with the movie are only minimal. I was a little annoyed by some plot developments being resolved offscreen though, such as Marlow's return of the jewels, or his reconciliation with Mr. Hardcastle. There are also a few long periods where we don't see enough of certain characters, but this is understandable, given its stage origin, and amount of characters. And lastly, the endings can sometimes get a little abrupt and out of nowhere, but this poses little issue. 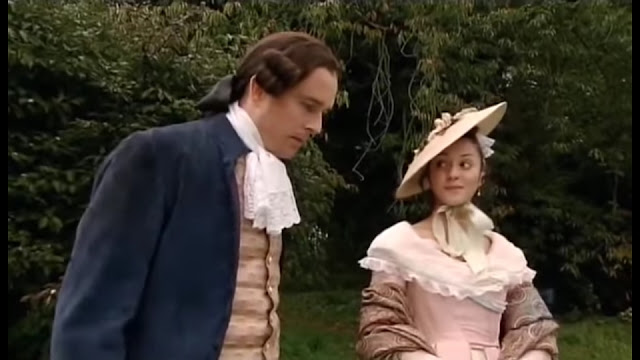 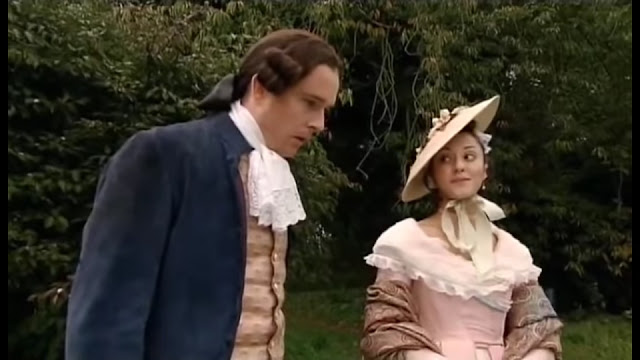 The movie looks eminently convincing. A fairly cheap production in the traditional sense, it makes do with its period costumes, and the neat location. Filmed at the antique Wiveton Hall, the movie is easily able to slip into the past, despite a lack of budget.
As an adaption, this is stellar. It adapts the stage play word for word, and leaves nothing out. This does of course mean the production is quite long at 2 and a half hours, but hey, most plays verge on 3, so if anything we're getting a half hour reprieve! This is also a good adaption to TV. It keeps many of the stage's unique touches, like as characters voicing their inner thoughts off to the side, while also never feeling artificial, or spending 10 minute blocks without moving the camera. 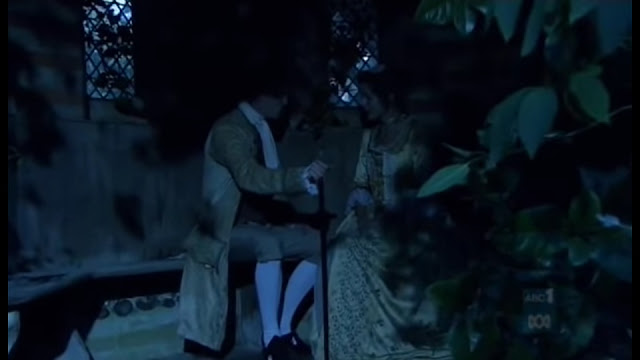 The direction is neat overall. Scenes and shots are framed well, and things are never boring. I did notice the use of day-for-night in a few scenes, but never felt it was used poorly here, and I liked the almost blue tint some of the nighttime scenes have.
The dialogue in She Stoops is a highlight, with an abundance of wit and charm.
"I wonder why London cannot keep its own fools at home! In my time, the follies of the town crept slowly among us, but now they travel faster than a stage-coach. Its fopperies come down not only as inside passengers, but in the very basket."
"Blockhead! Is not a belly-full in the kitchen as good as a belly-full in the parlour? Stay your stomach with that reflection."
"You have nothing to fear from him, I assure you. You’d adore him, if you knew how heartily he despises me."
There's also a brilliantly insightful line on politics, that really cuts through the heart of the matter, and shows how little has changed since the 1700s. 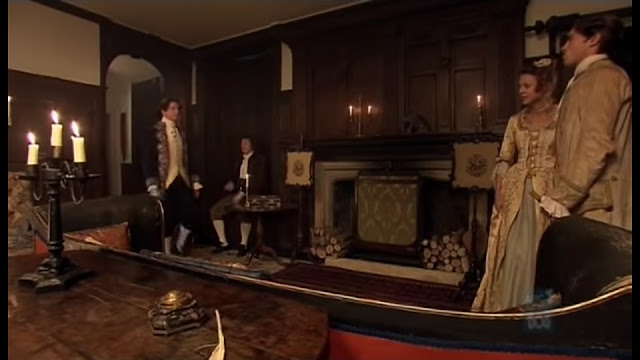 Musically, She Stoops is quite unique too. We have a fun and jaunty main theme and other scorings, but the highlights are the recaps for each episode, which are sung by Tony himself as a Greek chorus of a kind. It's a creative, funny, and fitting way of getting across the story, and staying true to the era.
The actors all do good jobs. They are fun, and embody their roles perfectly. They act quite broadly in some cases, in that typical stage acting kind of way, where a performer is trying to reach the back row, but this is always done in an amusing way, never feeling obnoxious. 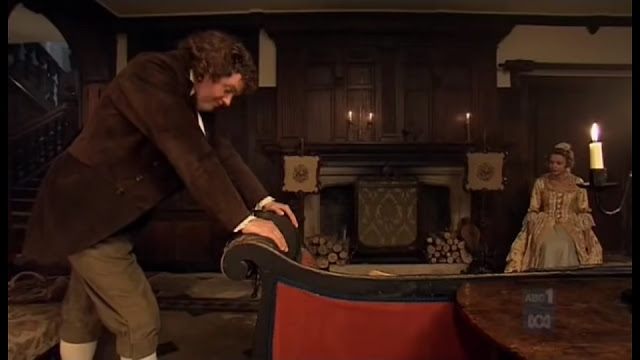 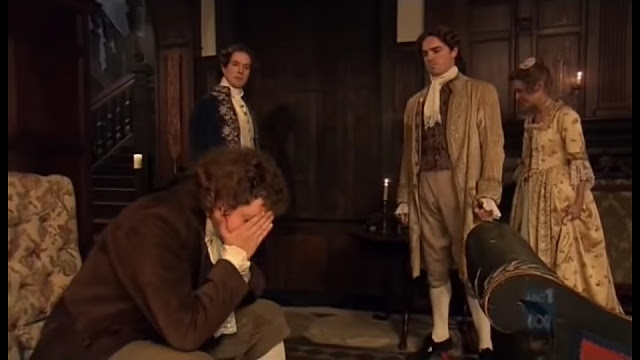 The series is 5 episodes long, but features a bonus 6th episode, telling the life story of the play's author Oliver Goldsmith. The dude had a rough life! Never taken seriously by his parents or peers, treated like shit by others for the most ludicrous of reasons (like one asshole who mistreated him for the crime of being Irish), and most frustrating of all, he was the sort to make jokes that would always be taken dead seriously by those around him. Don't you hate people like that? You make what you regard to be an amusing and obviously facetious aside, but then a pin drops and the other person looks at you like you've just said the most stupid or terrible thing.
It's an interesting documentary, giving history and context to the play and its characters. It takes an unbiased view of the man's life and accomplishments, and comes across as very positive and appreciative because of this. I came away with quite the picture of Goldsmith as a person and an author, and had added Gooseberry fool to my repertoire of insults. 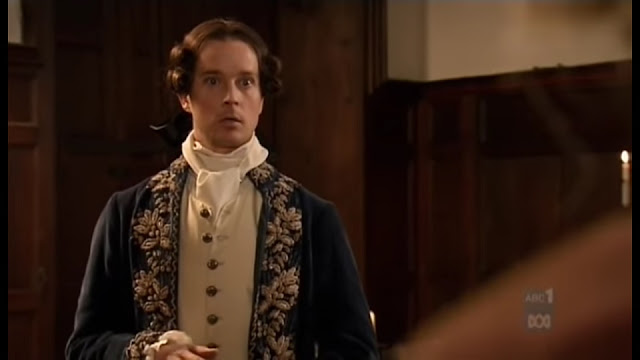 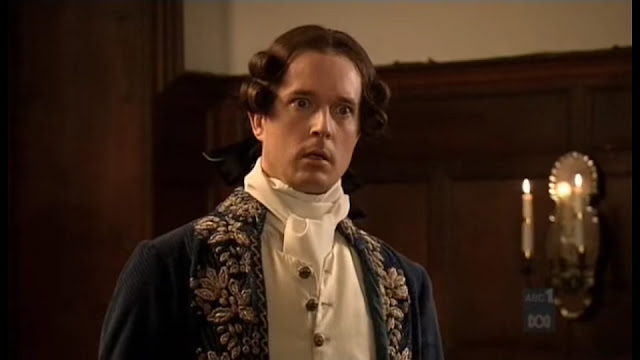 As a period comedy, She Stoops to Conquer may well have a limited audience nowadays, but I find it to be a wonderfully witty time. It's a bit on the long side, but this is never a problem, and it's easily the kind of thing you could polish off in a single rainy afternoon...
Posted by Chris at 8:28 AM