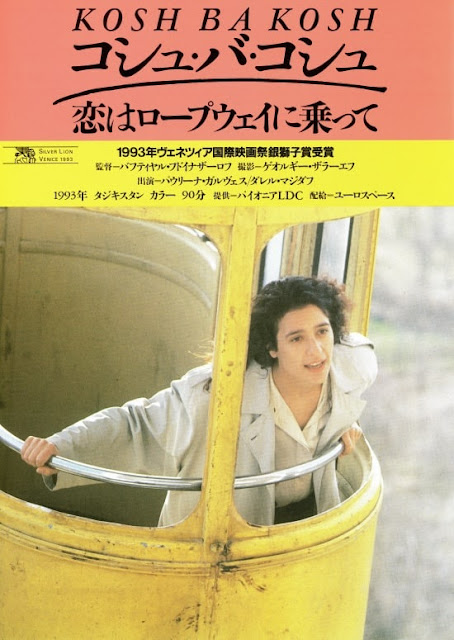 Mira is a young lady moving back to her home country of Tajikistan, after studying in Russia. She's soon met with a rude arrival when it transpires her desperately in debt father has gambled her away in a game. As the men squabble over her, young lift operator Daler takes her away to his home, and a romance blossoms between the two, despite outward conflict...
Kosh ba Kosh is a Tajik drama and film festival contender, coming from director Bakhtyar Khudojnazarov. It tells the dramatic story of love and strife in the crumbling post-Soviet nation 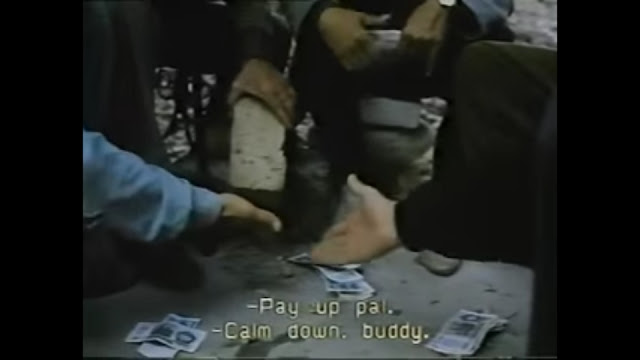 The movie gets off to a good start, though kinda heavy. Where I struggled to take the movie seriously though was that Mira's father could rack up such serious debts with a friendly game of dice on the street with some mates. It's not like he's gambling in a casino here! Ibrohim is just some random dude, not a mafioso don.
All the bickering over Mira's fate from these older men had me worried the film was gonna take a turn for the depressing. Thankfully this section of the film comes to a fairly swift end, as Daler 'wins' Mira on her request, and the midsection focuses on the two getting to know each-other. The tone is fairly light, despite the film always remaining a drama.
At times the movie tries pushing the idea that Mira is unwelcome in Tajikistan, and seen as a fancy rich girl with no place here. But pretty much the only one giving voice to this is Daler's friend, who's just worried his association with this girl is gonna cause trouble. So how much of this is truth and how much is just twaddle is ambiguous, since the locals we see interacting with Mira seem perfectly chummy. 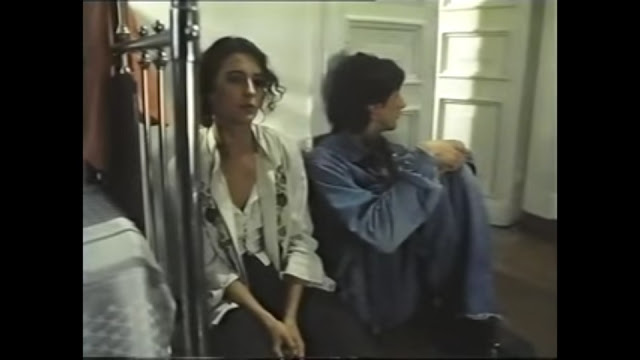 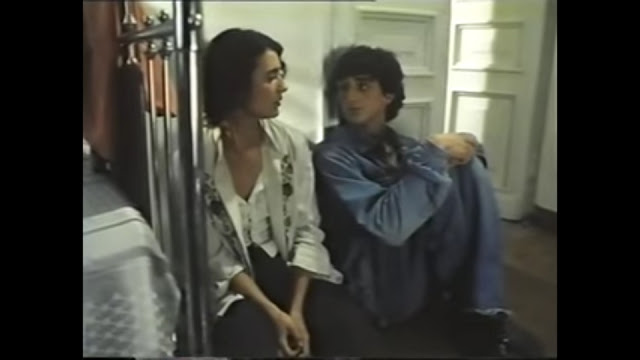 The last act is where the movie began to really disappoint me. Mira begins acting needlessly mean to Daler, trying to find any excuse to break things off. I get why-She's doing it to save him trouble. But come on, he grew up on these mean streets, I'm sure he can deal with a few assholes not liking his up-market girlfriend! There's no need to yell at him, dump him, and bugger off back to Russia! Have a heart, girl!
Everyone continues acting like assholes to each-other, like when Mira storms out of Daler's flat and back to her father's, suddenly showing concern for the welfare of the man who sold her like property. Then in the very next scene she's yelling at her dad and saying she'll leave if he doesn't =. Make up your mind! 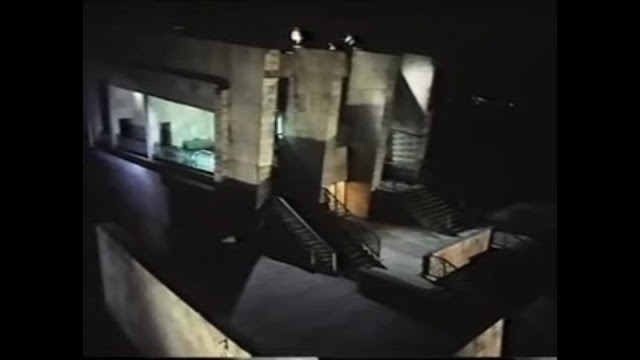 Everything seems to culminate in a final gambling match, where Daler attempts to settle the dispute with Ibrohim once and for all...Even though the old pervert admitted earlier to not wanting to =, telling Daler he can =. Nothing comes of this though and the match just cuts away. The movie potters along with random stuff, before finding the best excuse it can get to wrap things up. 5 minutes before the end we see Daler gambling again and it's suddenly revealed he's in debt. Mira is so pissed off at this that she immediately storms off and leaves. That's it. The End. 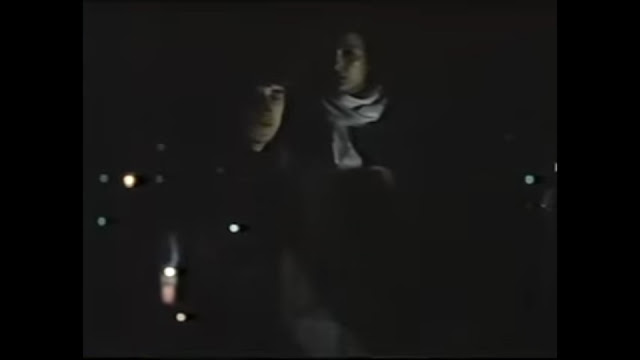 The characters are an alright bunch. Daler is nce enough, and likeable despite his early vices. The dramatic stuff by the end annoyed me a bit though. I got so sick of hearing the name Mira! On that note, she is a good girl in half her scenes. She makes the most of a crummy situation in a crummy area, and makes plenty of friends.
Her father meanwhile is a dickhead. This much is apparent from his actions at he beginning. Later on he gets angry that his daughter is disgracing him by dating a 'bum'. This is stunning in its hypocrisy, not only because he plays gambling matches with that 'bum', and is hardly a catch himself, but namely because he sold his daughter for a bet. And she's the disgrace, dude/mate?
Ibrohim is a bit confusing. What he actually wants isn't quite clear, although he always comes off as a jerk. And lastly, Daler's various older friends throughout the city are nice enough, and provide a good = for Mira.
Worth mentioning are a few really weird and random scenes, like the whole bickering and undressing(?) under the mattress scene, or when Mira meets a weird topless dancing man.
While not a magical realist film like other entries in Khudojnazarov's filmography (Luna Papa comes to mind), Kosh ba Kosh still bears familiar themes, including a strong feminist message, which is apparent even in the dedication at the beginning. While I didn't think it landed as well as it could've, I still appreciate the thought. 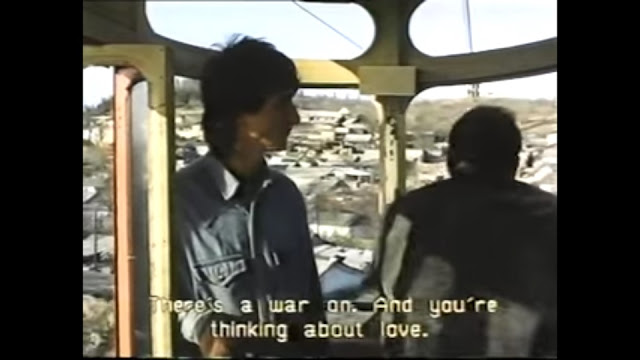 An important element to bring up when discussing Kosh ba Kosh is the fact that the Tajik civil war broke out during filming! The sound of bullets can be heard in the distance, sirens are frequently wailing, and one scene is lit by tracer rounds off in the horizon. I naturally don't want this to overshadow the rest of the  which is why I'm only mentioning it here, but it's a little hard to overlook when scenes are constantly interrupted by gunfire. Not only does it break your concentration on the film every time, but you get worried for the wellbeing of the actors, especially when they're being loud, moving around rapidly and making a spectacle, or throwing things around. Especially when they're stuck in the lift, going one way-Where the shooting's coming from! Luckily no-one was killed. 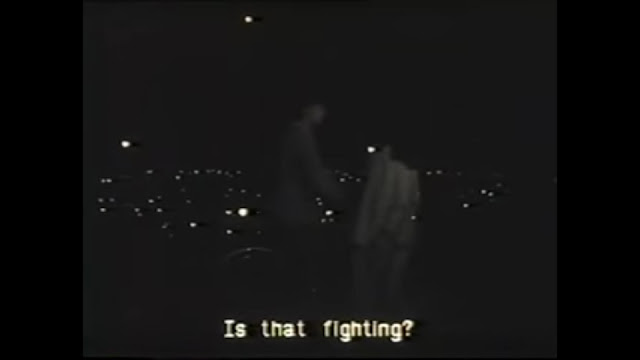 Despite the war raging all around the production, Kosh ba Kosh/the film's portrayal of Tajikistan is multi-faceted. I like the honesty displayed here. The movie is always upfront about the situation, from the rundown streets, to poor economy, and increasing violence. But unlike a film like Cabaret Balkan, it takes/shows the good alongside the bad rather than showing a blanket negative portrayal. Life goes on for everyday people even when a country is doing poorly, and even when the city is in a state of warfare, and even when characters are given an opportunity to leave, they don't just go "Jamaica here we come!", but instead ask if leaving is the right thing to do.
Bakhtyar Khudojnazarov has shown himself to be a very capable director, and he handles the material extremely well. While the plot is fairly simple and down to earth, he still finds great opportunities for nice shots, close up and far away, and quite a few in one take. Interesting perspectives are used (not to mention occasionally confusing), and the film is never visually boring, even if the locations aren't the most exciting around.
The actors all do good jobs. Daler Madjidav is a decent and relateable enough lead, Radzhab Khuseynov does a little too well as the slimy Ibrohim, and the remainder of the cast are fine. The standout is Paulina Galvez, who delivers a great performance, really nailing moments of  hysterical = as she jumps between joy and sadness so = you almost can't tell the difference. She's dubbed into Russian, since she presumably didn't speak the language, but this doesn't affect her performance too much, as the most impressive moments are all without dialogue. Also, the fact that Galvez was even in somewhere like Tajikistan to shoot a movie shows she's a plus actress!
The score here isn't the best, and a lot of the movie seems to go by without much in the way of music, but what there is is nice enough. 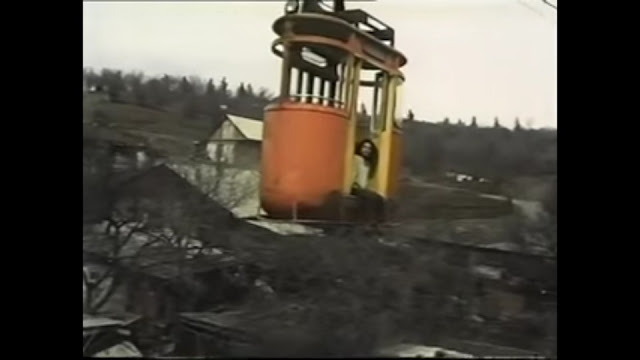 Kosh ba Kosh is a bit of a bummer as far as films go, but it's at least not depressing, and it's definitely worth watching if you're interested in world cinema. I'm not really sure if this film shows much of the Tajik people's cultural identity, but it certainly shows a thing or two about their resilience...