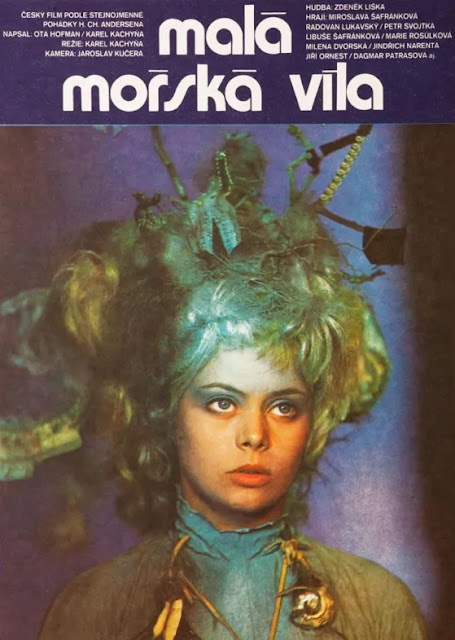 The Little Mermaid lives a tranquil life under the sea with her family, but as her father searches for a suitable groom for her to rule with, she yearns for the world above. She falls for a human prince, and saves his life against her father's objections. Unable to resist the temptation any longer, she goes to see a witch to gain the ability to go to the surface. Her wish is granted, but at a terrible cost, and the little mermaid must gain the prince's love all without her voice... 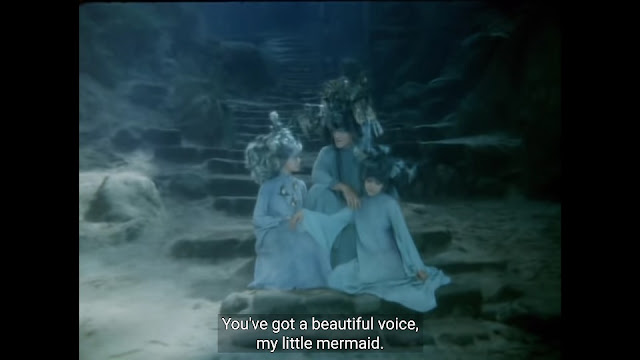 Czechoslovakia was rich with fairytale content during the 70s. Partly because the Soviet censorship would probably come down hard least upon something as safe as a fantasy set in antiquity, and also because they're just damn good stories. I'm leaning more on the latter. Even today these movies  are fondly remembered, and often overplayed on the local television stations every year.
A few of the Czechoslovak fantasies I've seen each have their differences, but were definitely birds of a feather. Malá Mořská Víla however is a very different kind of tale. It's got a unique tone, and an ethereal presentation. It almost feels like an experimental film, due to the dreamlike atmosphere combined with the 'underwater' movements and the almost eerie music. This is delivered well, without the movie ever losing sight of the fact that it's a fairy tale. 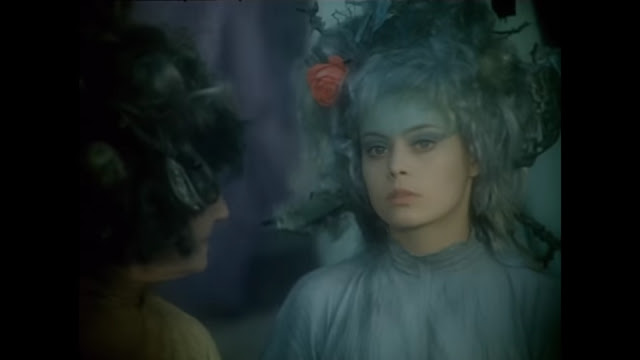 Malá Mořská Víla is by far one of the most faithful adaptions of the Hans Christian Andersson tale. This fact will either make you pleased and/or curious, or it'll make you scared shitless. Yep, a lot of old fairy tales have gotten considerably lightened over the years, and The Little Mermaid is a prime example. The original story is considered quite dark and depressing! Malá Mořská Víla is never quite that bad, but it isn't all sunshine and rainbows. The events of the film seem almost inevitable, and reach a sombre conclusion. 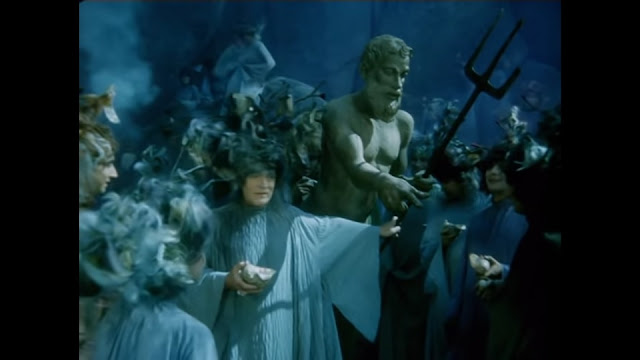 The ending itself is the only real deviation from the source material, not because of anything it changes, but rather what it leaves out. All the air spirit stuff is absent, as is the 300 years of good deeds to earn a soul. The former I kinda wish was present in some way, because that would at least make the Little Mermaid's = mean something in the end. But then again it is a bit silly. And as for the latter element, I'm glad that's not included. The Little Mermaid is a dear sweetheart! Sure, she almost stabbed a couple of people to death, but besides that she's really a lovely person, so being forced to do 3 centuries worth of good deeds before she's allowed the 'privilege' of having a soul is a bit mean when she's already ascended! 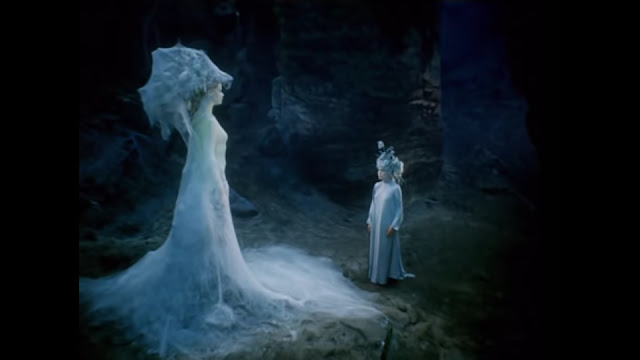 The nameless little mermaid is a nice lead. Likeable, sweet, and graceful, with an enigmatic charm.
But where she lost me is when she gives up her voice to  This is a problem I have with all adaptions. It's one thing if each step she takes is =  but why would she give up one of her most important assets? She's doing all this to be with the Prince, and tell him she saved his life, and she won't even be able to say "Hi". 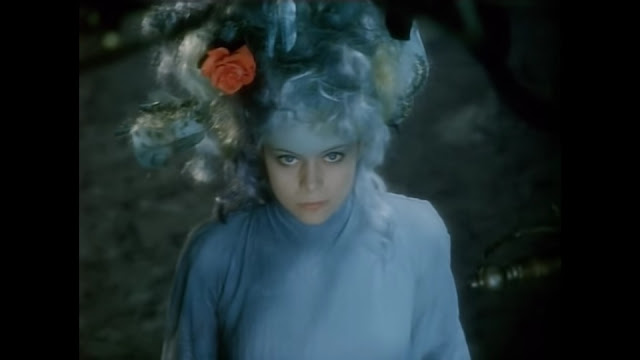 The prince is fairly likeable, though a bit of a dick for abandoning the mermaid for his new girlfriend. And so quickly too! It's all in the last 6 minutes! While he is a fairly nice guy, I didn't think much/highly of the prince's intelligence either, insisting sailing his boat through the most dangerous  because he heard a nice voice, presumably costing the lives of his entire crew.
The sea witch doesn't have a big role here, having only one scene. But she really makes it count. She's not evil per se, just not good, and she is played so matter-of-factly. She may be a violent witch, but at least she's honest, as can be seen in her hilarious line: "What can mermaids want from a witch? You want to be like humans. To have the prince you saved fall in love with you. It's a silly idea. But have it your own way, beautiful princess. This idea will bring your downfall. I'll make you a drink." 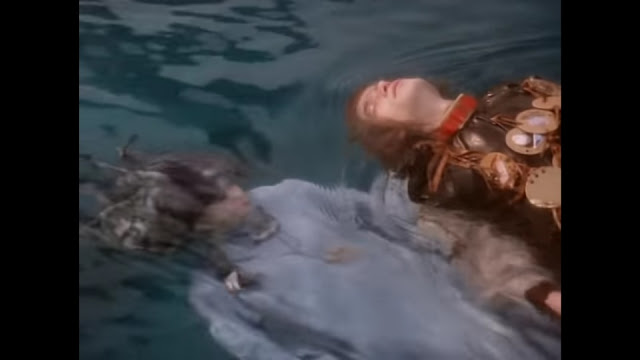 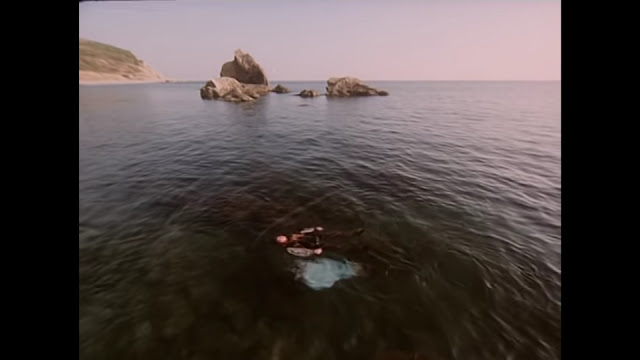 Malá Mořská Víla looks beautiful. The sets all look wonderful, as do the natural locations. The lighting is varied, with a blue palette for the sea world, a lush orange glow for the ocean above, and naturalistic tones for the world on land.   weather  the way the waves dash off the rocks is perfect. Another stylistic touch is that vaseline or something has been smeared over the camera lens for a lot of the underwater scenes. Thankfully the movie doesn't overuse this. There's nothing worse than a movie that deliberately obscures all its scenes just to appear stylish.
The costumes are all neat. They do look a bit goofy, but because everyone takes things so seriously and the story is so solemn, they make it work. It is clear that the budget probably didn't extend to fish tails, meaning none of these mer-people actually look the part, but the elaborate costumes and make-up [makes up] for that. The only drawback is a lot of the characters blend together. Not even age is a good indicator with how all-encompassing these outfits are. 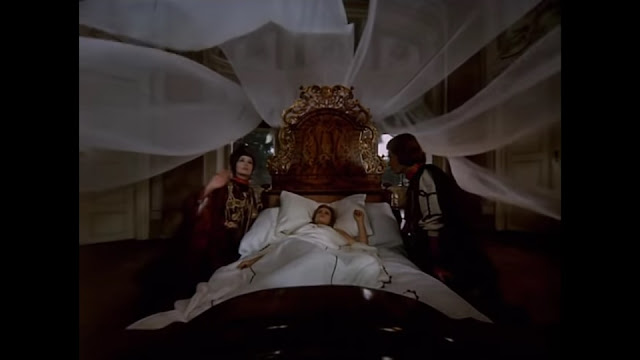 The music is fantastical and otherworldly, with many evocative pieces. The songs the lead sings are great too, and are exactly what you could imagine a sailor going to his doom over.
The actors all do good jobs, and sell the atmosphere well. The lead is Miroslava Safránková   Her famous sister Libuse is also present, but in a surprisingly small role. I actually thought she was playing the little mermaid's sister, but nope, shes' the human princess. Aside from one scene early on, she really only appears in the last 10 minutes. 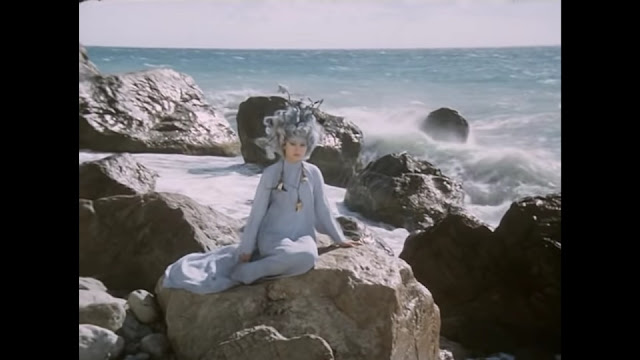 Malá Mořská Víla is a classic of Czech fantasy. It may not be the happiest movie, but it's worth watching all the same. There aren't many like it!...
Posted by Chris at 8:45 AM