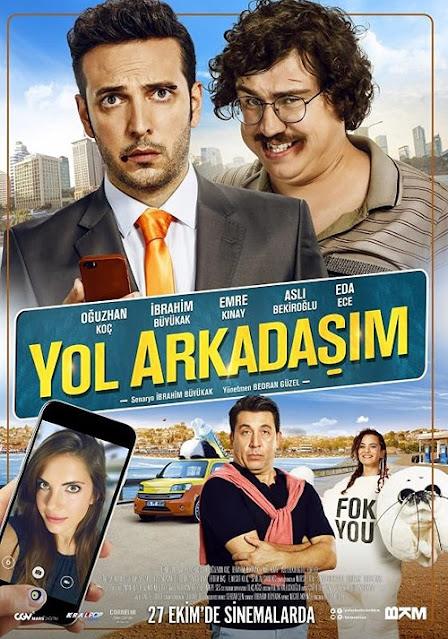 Yol Arkadaşım 1
There are some story ideas that are quintessential, and are told time and time again. Planes, Trains, and Automobiles is an example of one such idea. It probably wasn't the first to pull off that exact concept, and it certainly wasn't the last, inspiring quite a few movies over the years, including the enterprising Turks with 2017's Yol Arkadaşım... 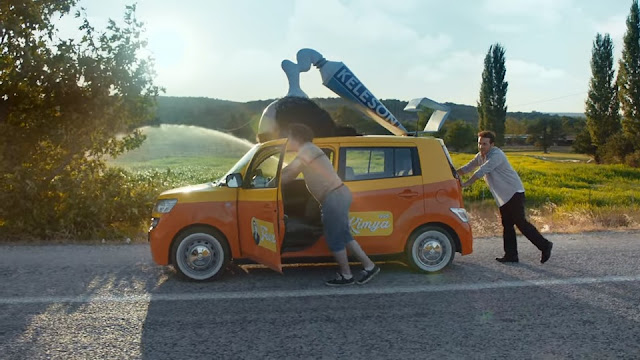 Onur is a bedraggled boyfriend and miserable employee, trying to make his life work. When he's suddenly let go from his pharmaceutical position, Onur 'borrows' the company car and begins a road trip, hoping to speak at a big presentation and win back his boss's esteem. Finding himself short of money he uses an app called Road Buddies, where strangers give each-other rides and divvy up the costs. Unfortunately Onur has the misfortune of meeting Şeref, a well-meaning but bumbling man who makes the trip a nightmare...
Yol Arkadaşım is a funny picture. It gets off to a good start, introducing us to the two leads well, and having good setup for the adventure at large. Almost immediately they begin running into problems (mostly of their making), resulting in some good gags. 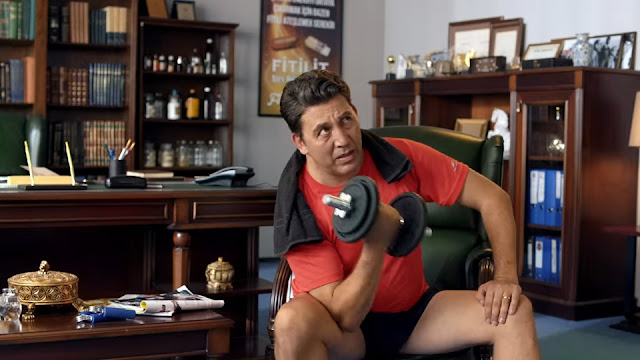 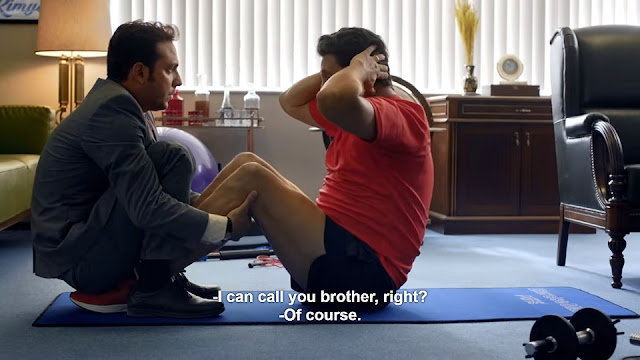 The movie is its best when the characters are on the road, and interacting with others. The cast of Yol Arkadaşım is populated with many quirky characters, from Onur's possessive and psycho girlfriend, to his slightly deranged boss, the brusque mechanic, the crazy female store clerk (Şeref is either very lucky, or in for trouble!), and of course the main duo.
Onur is a likeable yet slightly pathetic guy, and he does come off as someone who could be more than what he is, but life has beaten him down into meniality, and he's settling for nothing. It's good seeing him get the jolt he needs to really break him out of that funk and cut loose. 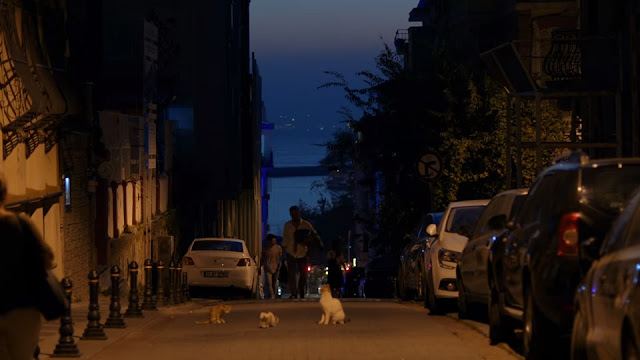 Şeref is a bit annoying at first, but has many good moments, and proves his worth as a partner. Though he goes a little too far sometimes, like his inability to sit still, or an ill-fated attempt to swat a fly in the car (I wanted to punch him after that!). Thankfully these moments don't ruin his character, and he always makes up for them. He gets some good emotional moments too, which all work with his character.
Bahar is good love interest, and a nice mix of dorky yet sweet, even if she is a dirty stinkin' hippy. I was surprised by how long it takes for her to become a part of the action, appearing almost at the halfway point. 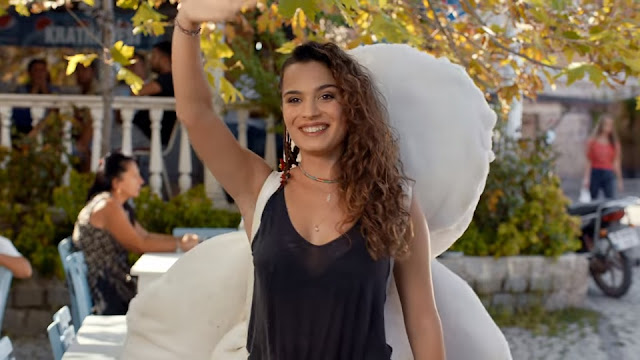 The comedy here often lands, and is only occasionally cringey (the frog scene in particular). The funniest scene is when Onur gets an on-the-road video call from his fiancee, and she suddenly gets furious because she can see a random woman driving next to Onur. "Who is that woman? Why are you driving next to her? Are you a pervert?! Are you cheating on me?!".
The climax is a little mixed. You may be expecting Onur to win back his job, and he does a really good job at the presentation, marrying his corporate skills with his abandoned passion for music. It all goes so well...until Şeref bungles things. It's a bit of a bummer, and I felt bad for that poor dude's hair! Some might be annoyed that Onur's work plans don't pan out, but others are probably glad. In any case its a funny climax, so I don't hold too much against it. What comes afterwards is great too. 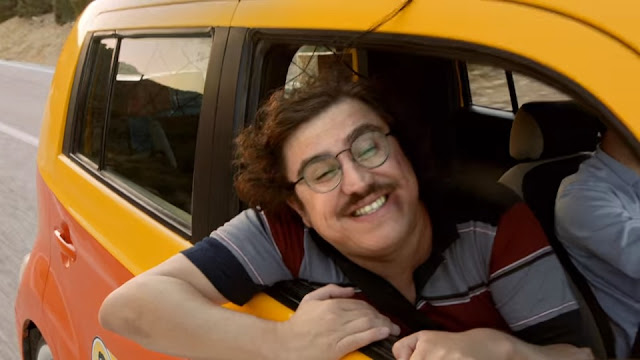 Oğuzhan Koç is a good lead, and also proves himself to be a nice singer too (apparently that's his day job beyond acting, so really I should be getting that praise the other way around). Ibrahim Büyükak is a great co-star, and very much the goofball of the film to Koç's straight man. He manages to look either gross and unappealing, or cute and lovable, depending on the scene. Aslı Bekiroğlu is pretty and sweet as the love interest.
The rest of the cast is full of familiar faces from Turkish cinema and the small screen. Eda Ece has a small but funny role as Onur's possessive girlfriend/fiancee, and Emre Kınay is amusingly evil and weird as Onur's boss Fevzi. Dilber Ay also has a decent role. 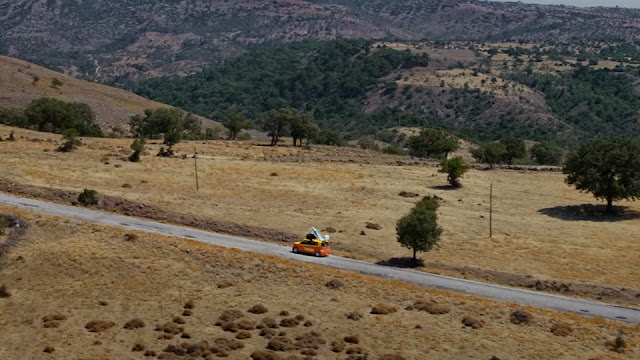 As a road movie, Yol Arkadaşım is the kind of movie that lives and dies on its scenery, and thankfully it shows off the dusty roads of its country well. There's lots of nice hinterland scenery as the heroes drive though, and we get a good feel for the Turkish countryside. 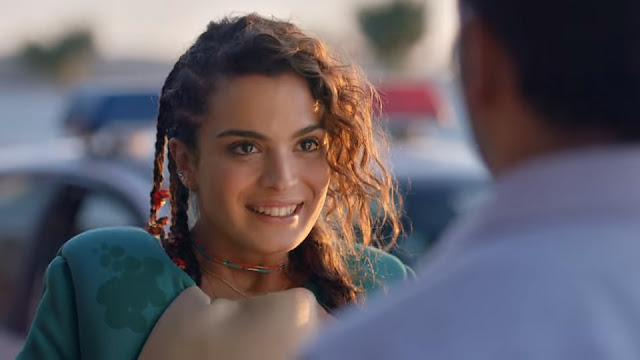 Yol Arkadaşım is a neat example of modern Turkish comedy. It's not on the level of its famous inspiration, but what is? As long as it's an entertaining diversion for an hour and change, that's all it needs to be... 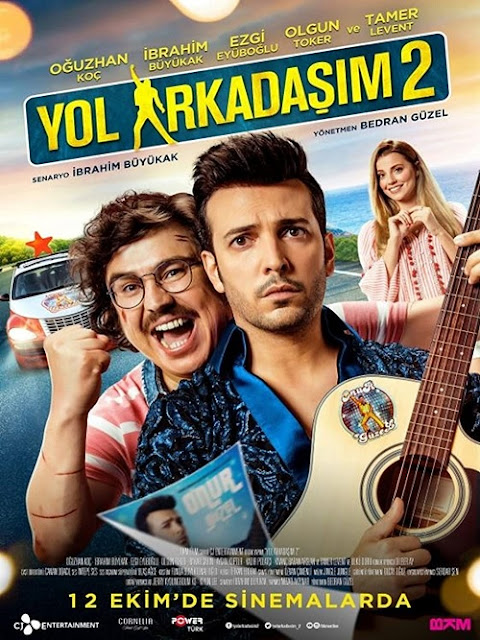 Yol Arkadaşım 2
Singer Rupert Holmes, known best for Escape (The Pina Colada Song), penned another famous track Him, a triumphant piece about a man standing up for himself and telling his philanderous spouse where she can stick it. It's a real rousing piece! Then a little later he recorded a follow-up all about the decline of this once proud man, standing as one of the most ill-advised sequel songs in history. That is in many ways like Yol Arkadaşım 2... 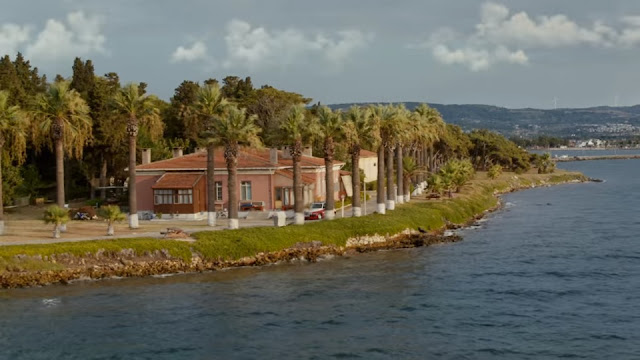 A year after the events of the previous film, Onur's new career as a musician is a total failure, and Şeref's management has let him down. Their girlfriends have left them, and with life on the rocks Onur decides his only option is to go crawling back for his old job. Şeref is determined to make things work out though, and drags an unwilling Onur on a road trip to a music contest. But without Onur realising it, the mob are on their trail for an outstanding debt...
Yol Arkadaşım 2 is an example of a bad sequel. The exact same template that proved popular first time round is copied, the characters are regressed, and their negative qualities are dialed up to 11. The comedy is more vulgar, and definitely more hit and miss. Some lines earn a laugh or two, but others not so much. 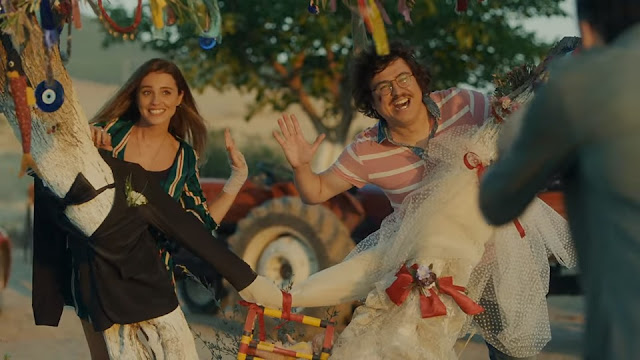 The film in general has a mean-spirited feeling. It permeates just about every scene. The characters spend most of their time covered in cuts, scrapes, and bruises, and it's not exactly appealing to look at. Imagine Planes, Trains, and Automobiles if Steve Martin was covered in blood and missing a finger. Even a goofy comic relief character isn't immune to this, getting knocked around by her boyfriend. Not all the comedy is bad. There are a few laughs here, and one particularly progressive moment. The overall tone though is unsatisfying. 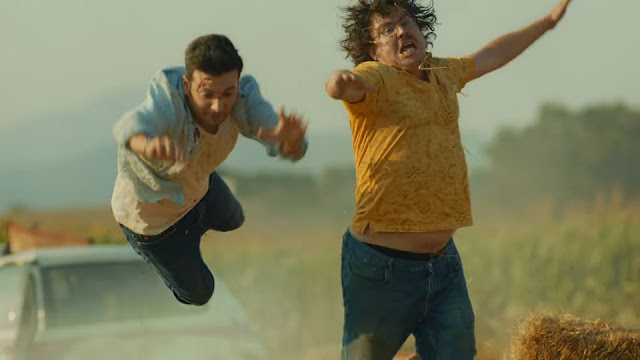 The plot, thin as it is, has the duo going from gig to gig on their way to the contest, and misfortune inevitable ensues. It gets a little frustrating at times, and you think 'Can't one concert go right?'. The musical choices at the retirement home do amuse. Even though it's a mess up, it's fresh, funny, and doesn't involve Şeref messing things up with a punch up for a change.
The wedding scene is a bit weird. Everyone's grumpy because the couple eloped, except they didn't really and are on a bulldozer, then there are more shenanigans, including a cake you just know is gonna be destroyed, and the bride even gets set on fire! Credit where credit's due though, the scene doesn't end with a catastrophe, and things do resolve well for a change.
One positive I'll lend the movie's way is that it at least feels like a better road trip movie than the first. Not that 1 did a bad job, but because the sequel gets a start on the trip sooner, has the whole cast assembled by 20 minutes, and has a lot more scenes of fun interactions on the road, it captures that feeling more. 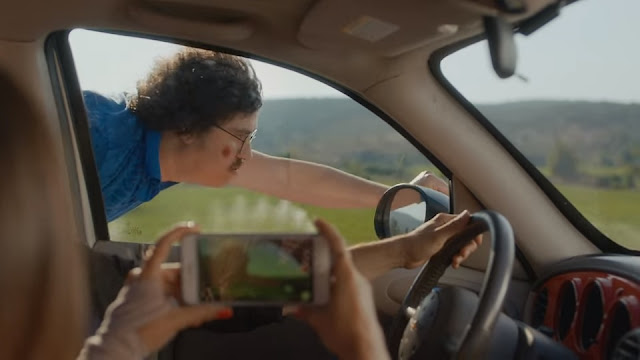 Love interest Çilek being a Youtuber is a nice touch, and that storyline was really promising, and it was nice seeing Onur and Şeref become minor celebrities. And the door was open for this to be how Onur's career as a singer would finally take off! But then a misunderstanding causes a rift between them, and she's out of the picture for literally the rest of the film. We only see her again very briefly at the end. Talk about a bummer.
The climax has some fun action, although the resolution of the mob storyline is a little disappointing and anticlimactic (not so much in what happens but how). I was expecting a ludicrous paternal twist, so thankfully that at least didn't happen. The ending itself is mixed. It's a bit of a downer that after everything they've gone through to get to this point, the heroes miss the show. But at least it segues really nicely into a twist, and a decent final scene.
Onur comes across as a real jerk here. It's disappointing seeing how much of a failure he's become, and how everyone has been driven away. His reasons for not wanting to get in touch with his mother are also pretty petty, considering we discover she was intentionally kept away by a spiteful father, so it ain't her fault, asshole!
From failing as a manager, to working with the mob without Onur's knowledge, and his usual mistakes, Şeref does nothing in this film to indicate he's a good friend, though by the end things come together well, and everything is worth it. Thankfully it's not too long before we start seeing their good-natured and friendly banter. It's a breath of fresh air after seeing them at each-other's throats for half an hour
Çilek is a nice new love interest, and I actually found myself liking her more than Bahar. Maybe because we get to know her sooner. They share good chemistry. We get a return of the frog joke, and I found it less cringey than I did first time round. It fares better here, even playing a part in the drama. 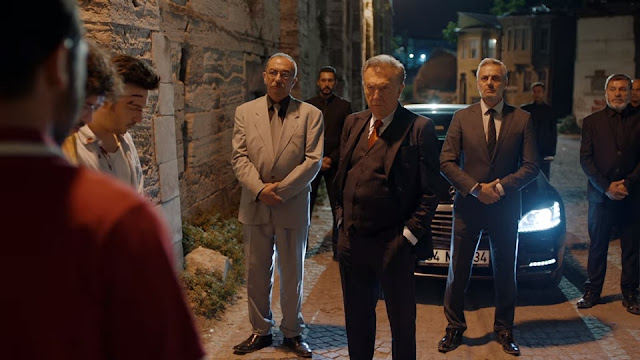 The villains are an ok bunch, although some of their scenes get a bit violent for the kind of movie this is. The main antagonist is an asshole, and a bit of a cheat. I wish Şeref would have called him out on selling his property early. I also hoped for a more substantial conclusion with him.
The performances here are all good, with the returning actors delivering fine performances, even if their moods are more annoying. Ezgi Eyüboğlu is a nice newcomer. And lastly, the direction here is all very good, with a few great shots. And the music is likewise nice. It makes you wonder why Onur's career has gone so poorly! 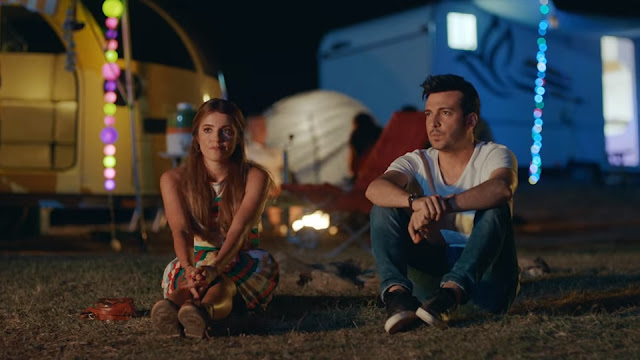 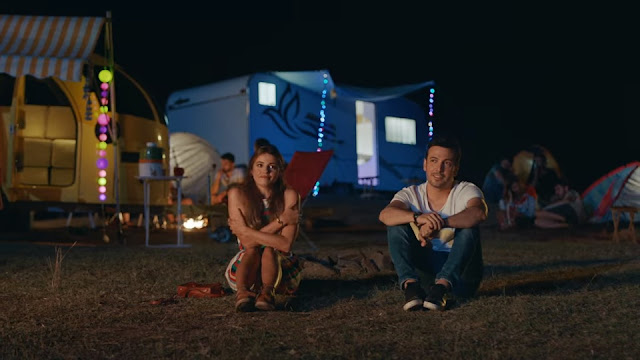 Overall, by the end Yol Arkadaşım 2 isn't a completely irredeemable movie, and it's got plenty to enjoy, even if only a little. But its problems as a sequel and as a movie in general drag it down. I appreciate the effort at least and still really enjoy these actors and creative teams, and look forward to what else they do. I just hope it's better than this...
Posted by Chris at 8:31 AM