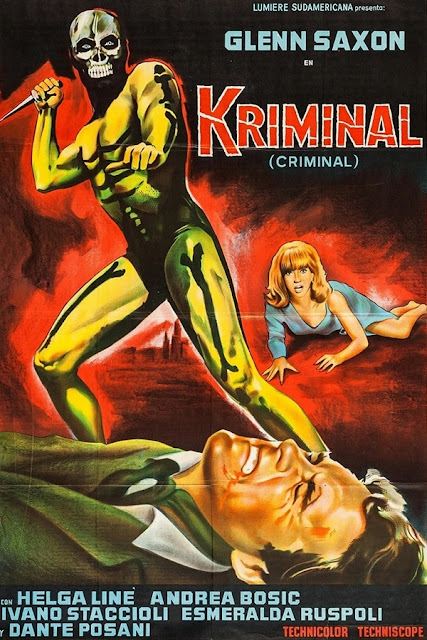 After successfully stealing her majesty's crown jewels, arch-fiend Kriminal has finally been captured, and is all set to face execution. Knowing he'll never talk, Inspector Milton decides to facilitate Kriminal's escape, to lead him to the stolen goods.  Despite their best efforts, he evades the police, but sends the crown jewels back anyway. It's not like fencing them was a real possibility, and he just wanted to have some fun. And now he'll have it when he discovers an insurance scam over a priceless diamond... 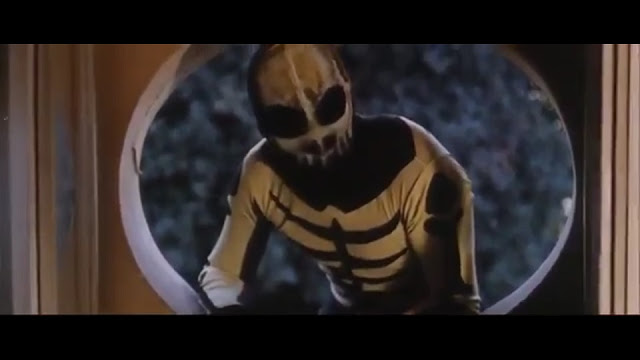 Kriminal was one of the wave of comic book anti-heroes to have emerged from Italy during the 1960, spurred on by the popularity of Diabolik. All these characters were pretty derivative of each-other, but that's honestly not that big a deal. They're all fun, and besides, Diabolik himself is a nicer version of the older character Fantomas! Kriminal was one of the meaner ones. Not as bad as the deranged supervillain Kilink (who also dressed like a skeleton), but not the kind of guy you'd wanna invite over for a nice dinner.

Kriminal's first film outing is an entertaining eurospy/supercriminal flick. The plot's simultaneously simple and labyrinthine, and thankfully you're mostly able to keep it all in your head. The movie tends to pick a subplot and stick with it for a block of time, so we're never racing from one scene to another without any sort of reprieve. 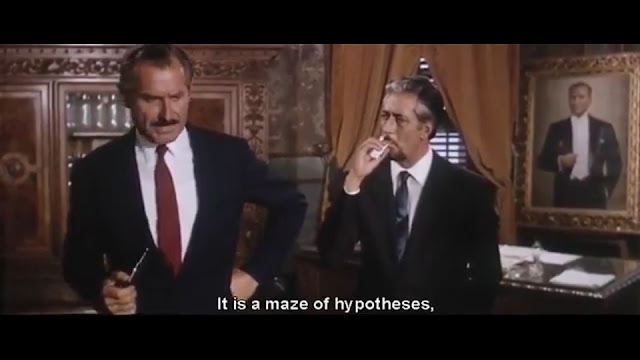 The story concludes well, and there's a development in the climax that's really well thought out. The kind you're aware of, but don't realise will play any kind of big role, until the end when you realise, and pick your jaw up from the floor with a grin of surprise.

The ending is loads of fun, and transitions well into the comic layout, although it then keeps going, suddenly trying to cram a whole bunch of stuff into like 5 seconds.

Kriminal is an entertaining lead character. He may technically be the villain, but you have fun watching him, and he's just bad enough to be interesting, while being 'heroic' enough that he doesn't come across as a psychopath...Well, except that attempted bombing scene, anyway, though that kinda felt out of character and unnecessary!

His costume is great, with the yellow streaks making it pop out more and stand out, while managing to not be so garish that it's ridiculous. The film strikes a good balance of his handsome regular face, his various disguises, and his masked self  until the last act however, where the Kriminal costume is conspicuously absent 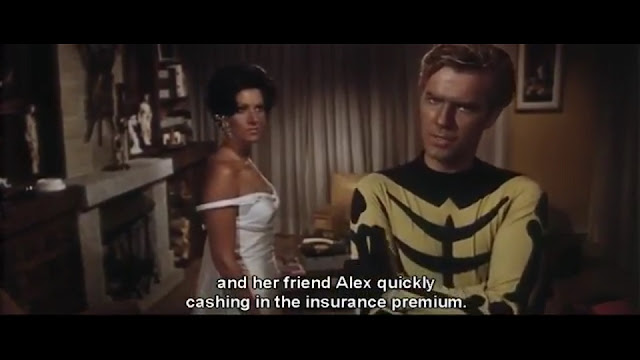 The policeman hot on the 'hero's' trail is Inspector Milton, who I liked at first, but soon proved himself to be an old fuddy duddy, who wants to capture poor Kriminal just because he's committed a few thefts here and there. And then there's his 'golden' line of "Kriminal was not the type to allow himself to be killed by a woman.". As the movie progresses though, I grew to like him more. The more he fails, the more you want to see him finally drag that criminal Kriminal behind bars.

There's moreso several little villains here rather than one main antagonist for Kriminal to face, and perhaps that's because he's the real bad guy, and from his point of view that distinction falls upon his nemesis Milton

Just about every character here has at least one lover, and are always double crossing each-other. It gets a little confusing at times, but at the same time it's a treat watching all these criminals think they're so clever, as if they're the top-dog, only to see their whole plans unravel before them, Kriminal having truly been in control the whole time. 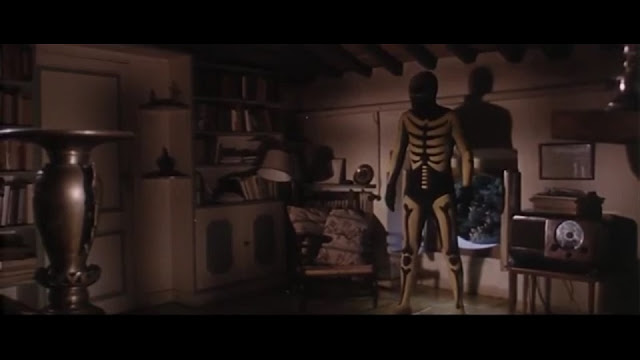 Set in a vision of the world where everyone speaks Italian, regardless of nationality (even the British!), Kriminal is a very international production, made by Italy and Spain, starring a Dutch lead, and filmed in Turkey. It's just globetrotting enough to be exotic and fun, while at the same time not overwhelming us with vista after vista.

The acting is pretty good. Glenn Saxson is a charismatic and deadly lead, while Andrea Bosic is fine as his rival. Helga Line does an alright job with her double role, but is a bit underused. Ivano Staccioli is an alright villain, but is hopelessly outmatched by Saxson's Kriminal, which perhaps works!

The opening credits to Kriminal are a fun pop art spectacle, with still frames seamlessly morphing into comic pictures, with stylish speech bubbles and sound effects, and everything else. 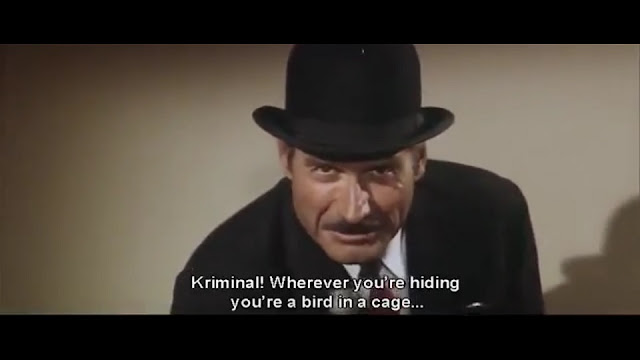 Overall, I recommend Kriminal. It's a fun movie despite any small issues it has, and it's a great introduction to its genre (though still start with Danger: Diabolik, or I'll hunt you down and steal all your money). 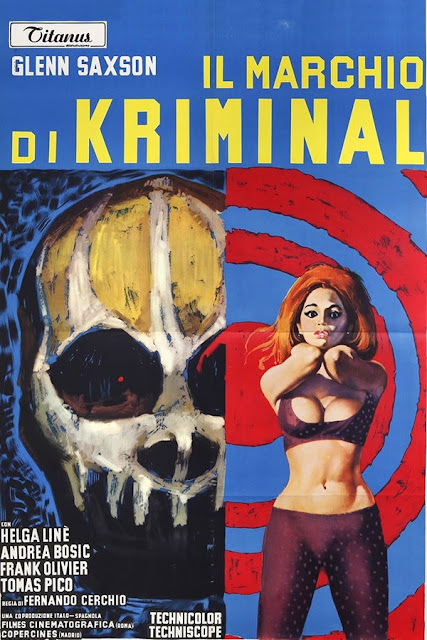 The Mark of Kriminal

Master thief Kriminal has been enjoying himself with a cosy little job. Together with his new girlfriend, he's working as the kindly head of an old ladies' nursing home, where he makes a habit of frightening the frail women to death, then faking insurance papers to make it seem like a young 20-something has just died. One of the victims leaves behind a Buddha statue, which reveals a secret note and map after being accidentally broken. Kriminal realises its importance immediately, and sets off on a new treasure hunt, to get some long-lost priceless artwork. Trouble is, he's not the only one on the hunt... 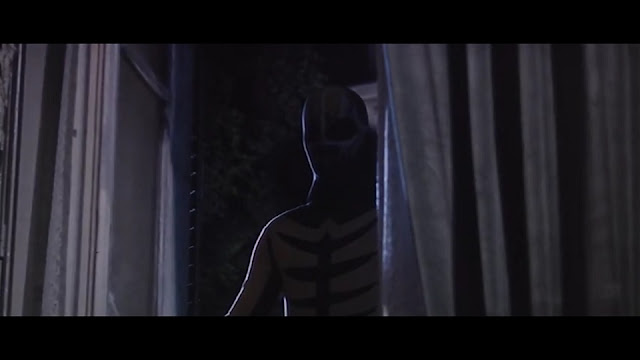 Its super groovy opening theme setting the scene perfectly, The Mark of Kriminal gets off to a great start. The story is intriguing, simple enough to be understood, with enough twist and turns to keep you entertained. We get frenetic fistfights, calmer scenes of investigation or plotting, car chases, and other death defying stunts. All of this culminates in a thrilling conclusion. 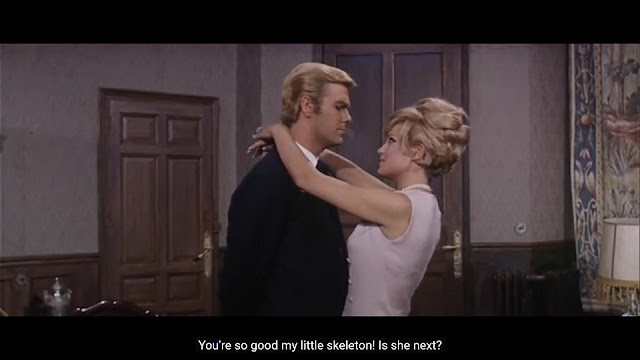 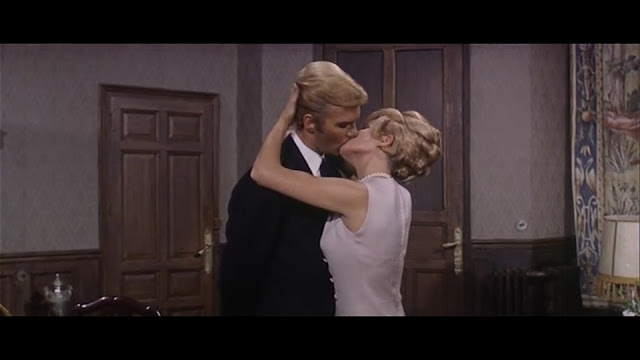 The plot does somewhat beggar belief though. How the hell did this German guy in England hide two priceless paintings in an ancient tomb in Lebanon that conveniently no-one knew about but him, seal it all up, hope that no-one else ever found it, and return home to be arrested for the murder of his wife! 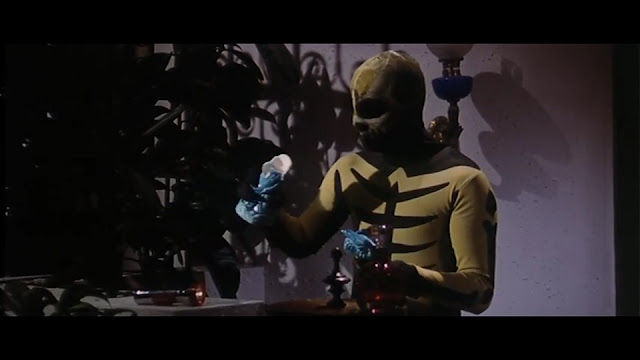 Whereas his actions in the first movie were more debatable, here Kriminal is more psychopathic   From frightening poor old ladies to death, to actively trying to harm Milton (unless he just took it for granted that he'd survive the gun-in-a-box trick). He's one clever skeleton though! He's a really quick-thinker, and the plans he comes up with are fab, especially for on-the-go ideas! His most ingenious moment comes on the boat ride, where he tricks the femme fatale into believing someone else is Kriminal so seamlessly and effortlessly that you almost believe the poor sap is Kriminal yourself. 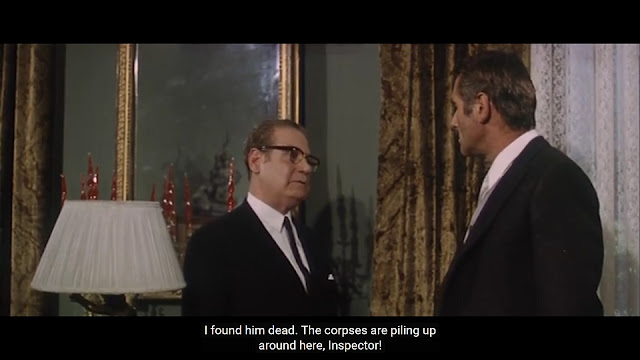 I felt sorry for poor Inspector Milton this time round. The poor man just wants to get married, and the criminal underworld just won't let him, all because he had the misfortune to receive a nice antique Buddha as a gift.

His partner Gloria was maybe my favourite character. A smart and feisty fiancee, and the only girl immune to Kriminal's charms, she has some great moments. Unfortunately she completely disappears after the halfway mark. Even Milton himself appears quite infrequently. I hoped we'd see their wedding finally go off without a hitch, but oh well. 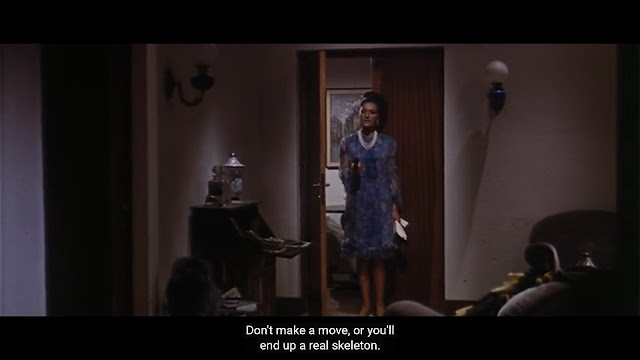 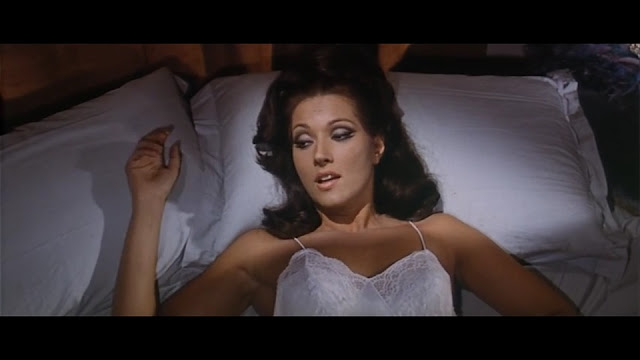 My favourite scene was at around the halfway mark, where all three threads from three characters all converge in the same room, and the inspector finally realises what's going on.

The ending here is something special too! I won't spoil anything. Just know that it's a very unexpected ending, and is a marvellous way to end the movie. I guarantee that no other masked supercriminal movie would've been this daring and complete. 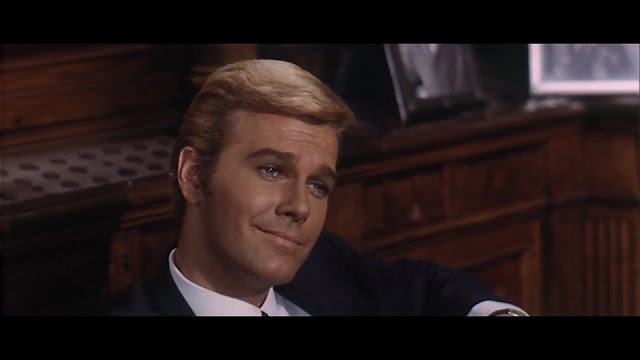 The acting here is all good. Glenn Saxson exudes a fun charm that makes you root for him despite him being a pretty reprehensible scoundrel. Andrea Bosic is another welcome familiar face as the dogged Inspector Milton. Everyone else does good jobs, including a returning Helga Line as a different character.

Like its predecessor, this film has a variety of locales, while also keeping it simple. Unfortunately they're the exact same locations as the first movie. It's not a huge deal, as it has a nice ring of familiarity, and we see them from different places, but I would've preferred to see him in Rio, Vienna, or Nice. To my frustration, both these movie's keep mentioning Beirut as an important location, but never going there! Thankfully this is eventually remedied. 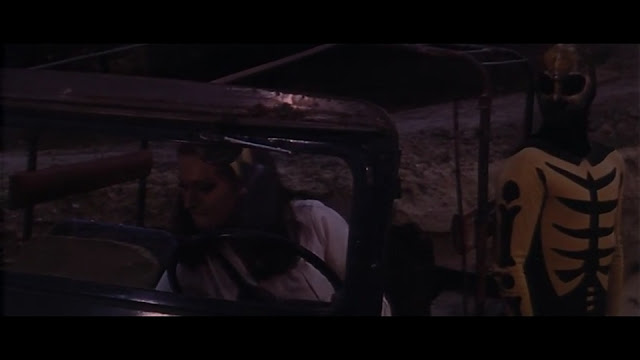 One of the most creative things about Mark of Kriminal is its use of art! Whereas the first movie just had the comic book credits, Mark has these nice scene bookends, where we transition from the real actor to an illustration, with a speech bubble providing their inner thoughts. This really sells the movie's comic book origins. I always like it when films of such origin aren't ashamed of it, and actively have fun with it. Being both visual, these are two mediums that can intersect quite interestingly! 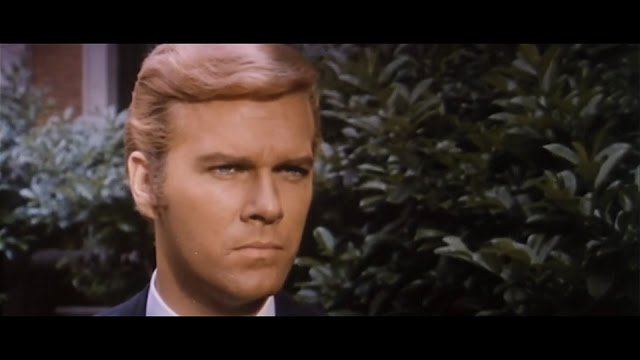 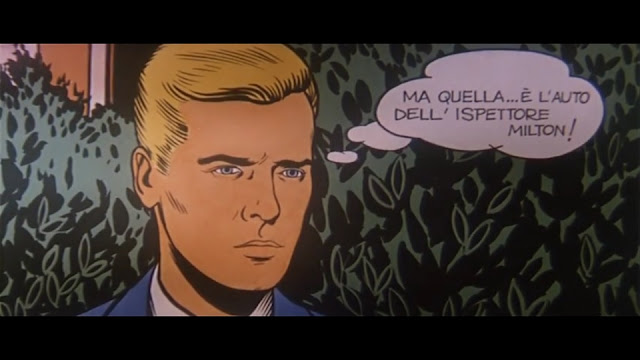 The music here is very good. A swinging 60s score that elevates the movie and makes it so much more enjoyable. The composer must've only been able to think of the one tune, and so milked it for all it's worth. Props to him, he turned it into an effective leitmotif, with many enjoyable rescorings!

Mark of Kriminal is a great sequel, improving on the first film's problems, adding cool new flourishes, and being an all-round fun time. With an ending that ties up all the series' loose ends, it really makes for a fine cap-off to an entertaining duology...
Posted by Chris Hewson at 8:47 PM