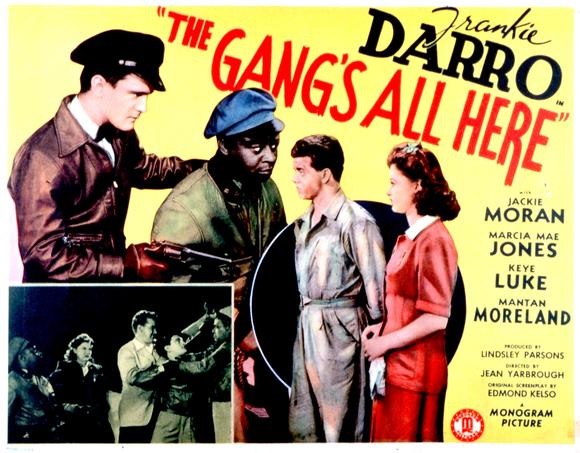 The Overland Transport company has been hit hard by a recent spate of attacks on trucks making their deliveries, and all of their drivers have quit for fear of death. Manager Pops, his eager daughter Patsy, and clever but put down upon mechanic Chick are at their wits end, when luckily two out-of-work drifters come into town looking for a job. Frankie and Jeff are both eager to work, and eager to eat, and being qualified and fearless enough, they accept the job, quickly finding themselves up against dangerous forces... 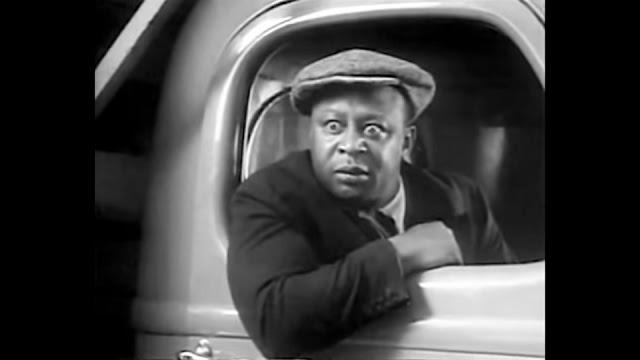 Now here's a surprise for sure! In the past I've seen just shy of half a dozen Frankie Darro-Mantan Moreland comedy outings, and they've all been varying degrees of mediocre to downright bad. I thought 1941s, The Gang's All Here would be more of the same, but it's actually quite a good movie!

The plot here is interesting, with a nice mix of danger and intrigue, with plenty of humour. The stakes are clearly defined, and there are a few moments that succeed in being pretty tense. For a 1940s comedy, that is. Perhaps my only real problem is that I feel the environment and characters are so rich that 1 hour wasn't enough! 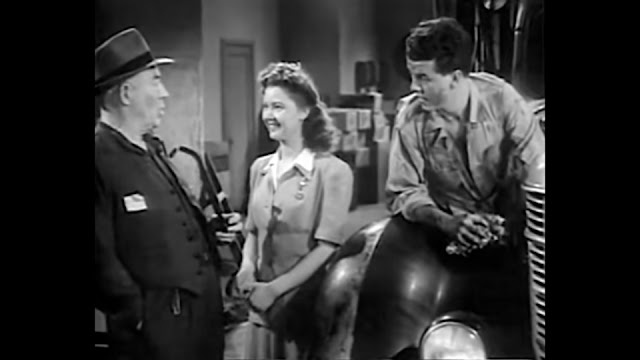 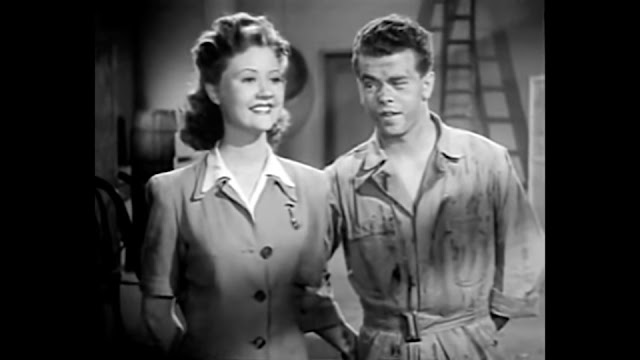 The cast are the most notable thing about The Gang's All Here, perhaps echoing the title. At first it seemed like there were too many, because there are a lot. Frankie and Jeff, Chick, Patsy, and Pops at the trucking agency, the villains, as well as a few others, as played by Keye Luke and Lawrence Criner! Thankfully there doesn't come across as too many characters. Not only that, this is one of those movies that introduces a ton of cast at the beginning, but they're the ones you'll be seeing for the entire film, with no new faces beyond them. This can sometimes be a little overwhelming, but once you get used to everyone, you're good to go, and it's a comfy feeling to have a cast where you know who everyone is.

The ending is really abrupt though, with no real wrap-up. At least we're closed out on a funny line courtesy of Moreland! What better way is there for one of these movies to finish, in the end! 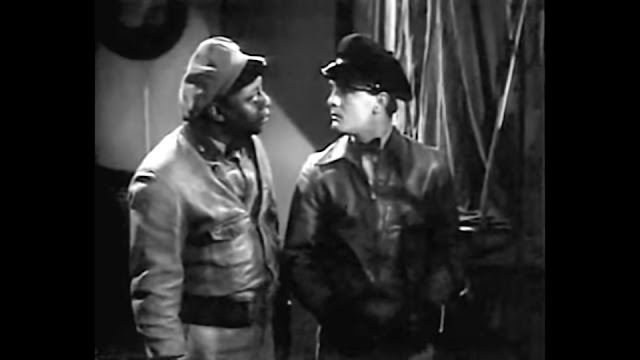 In previous films, I found Darro's characters to be unlikeable, and even if they were on the right track, their wrongheaded way of going about things was so frustrating that I was often rooting against them. In this case though, he's never dumb, investigates things in a competent and professional manner, and even shows endearing bravery! I also like that he's a legitimately skilled driver, and this is just taken as a given. There's a bit of surprise early on, but that's quickly gone.

Jeff if just as fun as always, eager for work, but not too much, and is reluctant to face any danger but always has to anyway. 'Old Bubble Eyes' always breathes life into whatever he stars in.

actually come across as friends. Frankie's still the one in charge, and getting the two into messes, but

The rest of the protagonists get enough to do. Chick and Patsy little story is fun to watch, and Keye Luke's seems like an unnecessary addition to an already full cast, but he ends up becoming very important. Plus, you appreciate his presence anyway, both for the well-written and likeable character, and for him as an actor (Naturally!).

Even the villains get an interesting dynamic to them, with how they're willing to do anything, but aren't heartless about it, and intend on making their employer pay for making them kill these 'kids'. They're still going to kill them of course, but they want their employers to know they they're not happy with the situation. Excuse me rolling my eyes. 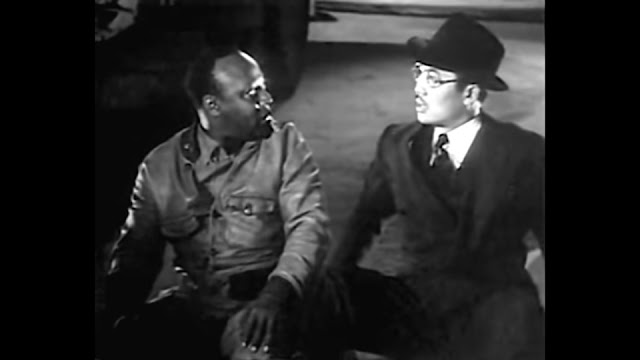 The Gang's All Here is full of great comedy. There's even a good gay joke! It's a subtle one, and you'll only notice it if you're on the up and up with ancient Macedonian history, but it's still a laugh, and it's not an offensive joke either by any means.

The dialogue here is great too, from the many exchanges between Frankie and Jeff, to assorted lines throughout.
"I can handle a mug like you every day of the week and twice on sunday!"
"That old truck rolled along just like it was on wheels."
Upon seeing the amount of tickets his new driver has amassed. Pops: "Don't you know it's against the law to drive a commercial vehicle that fast?"...-Frankie: "I can explain that..."-Pops: "What'd you do, challenge every cop you met to a race?!" 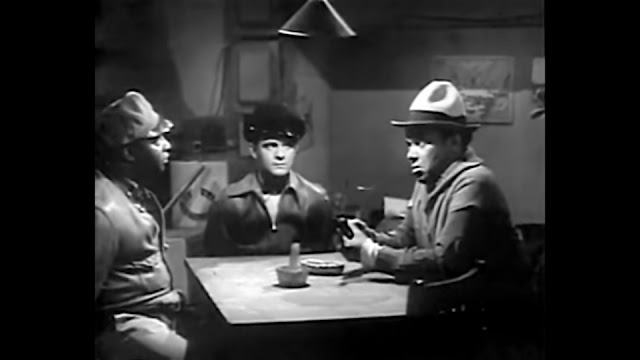 The acting here is all very good, and each performer stands out. Jackie Moran is good as the down-to-earth hired help, while Marcia Mae Jones is bouncy and fun as his enterprising and pushy girlfriend. Keye Luke is a lot of fun in his role. I'm used to seeing him as straightlaced policemen, or ancient kung fu masters. I've never seen him as just a regular dude. This must've been quite positive representation for 1941!

The villains here are all ok, with the best being Lawrence Criner. Man did this guy have range or what! I've seen him playing dumb thugs, clever gang-lords, tribal chiefs, mystics of ill repute, and romantic heroes!

And lastly, the two leads are very good. Darro is likeable and leaves a good impression as the hero, while Moreland is his usual hilarious self. The two play off each-other well, and the comedy always lands. 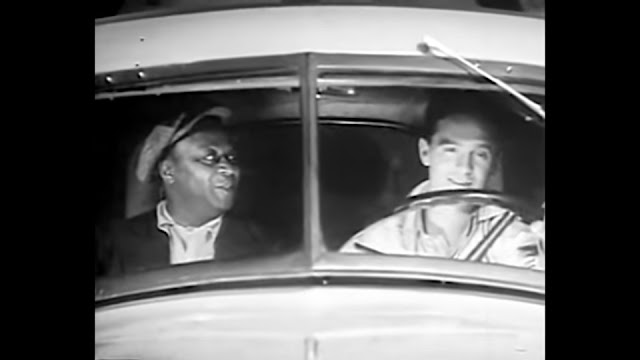 While previous Frankie Darro-Mantan Moreland movies left me a little cold, I have no fear in recommending this one. It's great fun in its own right, and especially if you're a fan of the two lead actors!
Posted by Chris Hewson at 9:01 PM