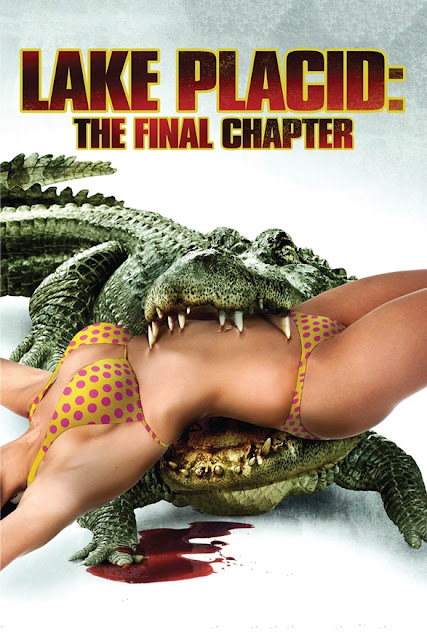 The Lake Placid series is still going?! Huh! Last time I checked, there was just the one movie, and now there are three sequels and a crossover with the Anaconda franchise!

In the town of Lake Placid, the whole area of Black Lake has been sealed off with a huge electric fence, designed to keep the giant mutant crocodiles that dwell inside imprisoned, where they can't hurt any more people. Things go wrong, however, when environmental scientist Dennis leads a group of poachers into the enclosure, and the expedition fails miserably. Teenager Max, a guard by Black Lake's entrance, investigates the screams, but is attacked and dragged away by a croc, leaving the gate open. A short time later, a school excursion is headed for the neighbouring Clear Lake, but the lazy bus driver, who's too preoccupied to keep his eye on the road, drives right through the open entrance to the crocodile enclosure without noticing. It doesn't take long at all for the students and adults to start getting killed, and it's a race against time as student Chloe and her friends (including an injured but alive Max) try and survive, all while her mother Theresa, the local sheriff, desperately searches for them... 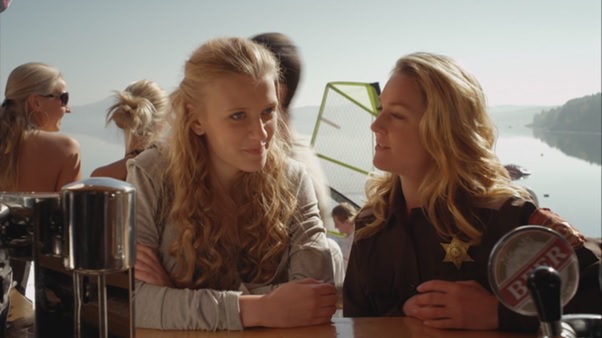 Lake Placid: The Final Chapter is surprisingly decent. It knows exactly what it is, and knows when to gently poke fun at its premise, but despite that, the movie does take itself seriously enough, and doesn't just give in to farce. It's by no means perfect though, as it's very stupid, as well as somewhat depressing. More on that later.

What bugs me the most about this film is that it doesn't really have much reason to exist. It does nothing different or special, and is just a random story about teenagers stuck in the woods while a monster picks them off. After four entries, couldn't the Lake Placid series do something else? It's this reason why I'm not the biggest fan of the Friday the 13th movies. Making this problem even worse is that this is meant to be the final chapter, as said by the title (granted, horror sequels don't have a good track record with the word 'final'), yet there's nothing final about it. Not even any grander plot, to make for a wrap-up to the entire franchise. It's just another story about people stumbling about the woods trying not to get killed. There's briefly a swarm of baby crocs introduced, but they're quickly forgotten, (besides some eggs, which are just a macguffin for a few minutes) so any tension about these creatures multiplying is non-present. 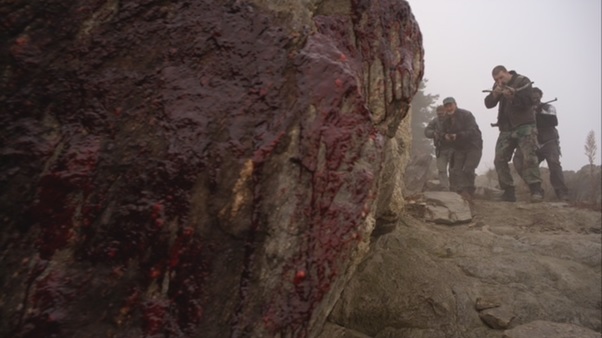 Ok, onto the movie's stupidity. First is that of Dennis and the poachers, who are going into this super deadly enclosure, yet are completely unprepared, and put up barely a few seconds of a fight before running away and getting slaughtered. Following that is how incredibly contrived both Max's stupidity is in opening the gate and leaving it wide open, as well as how he just walks right into the deadly mutant crocodile enclosure he heard agonising screams coming from! Next, the bus driver messes things up for everyone by being too busy looking at porn on his mobile to keep his eyes on the road. I'm surprised the bus didn't crash ten times over! I also blame the school board that seriously thought a camping trip right next to the monster-filled lake comparable to the rivers of hell was a good idea.

There are a few other dumb things about the film in general, such as how characters are consistently awful shots, almost never hitting the crocs. It's also a bit silly how the teens are openly talking about having sex, actually having sex, as well as skinny dipping, all while on a school excursion! Heh, good luck! The timeframe of the move is also bizarre, going from day to night and back again way quicker than it should be! 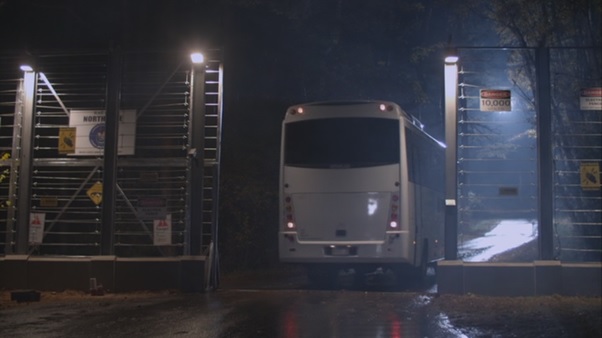 Horror movies, as well as movies in general, are dependent on having a cast of characters that won't want to make you hurl things at the screen. Thankfully while there are quite a few unlikeable ones here (as well as a gross one), none are so bad to ruin the experience at all. As for the heroes themselves, they're fine, for the most part, even if they can't hit the broadside of a goshdamn barn! The character Reba from Lake Placid 3 returns, despite coming down with a somewhat debilitating case of death in that entry, with a pre-credits scene showing her coming to after that movie's aftermath. She's a pretty fun character, and I totally get why they retconned her death at the end of the previous Lake Placid film. Unfortunately she doesn't really get much to do. Theresa is ok, though early on, I was wishing for her gruesome demise after her remarks to her daughter about how she should stop all her reading and do something fun. I was murdering her in my mind from that point on!

Onto the death scenes. Most of the characters who die are male, and most of them have it coming (well, by movie standards, anyway), so the viewer need not feel too bad about their deaths. They're handled ok, but there are a few that really pissed me off. First up is Brittany, who's unceremoniously killed once things start going wrong. At first the movie's making her out to be just the 'slutty bitch' with no depth, and only there to die horribly asap, but the script seems to be developing her character, and a bisexual romance starting to bloom with Chloe's friend Elaine is subtly implied, I think...but then Brittany's abruptly eaten. There's another irksome moment when the movie brings a seemingly dead character back-to-life only to have them die for real just a few minutes later. And then there's the obvious cannon fodder policeman. You just know the poor dude's going to die, because out of the four people going into the enclosure to investigate what's going on, three are main characters, and he's a random unnamed dude. His death is so inconsequential that the characters barely react, and it's immediately forgotten when a crocodile grabs the previously mentioned character. Pretty bad pacing, killing two random characters one after the other like that. 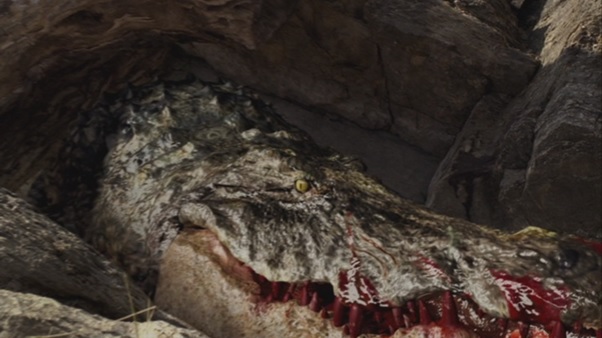 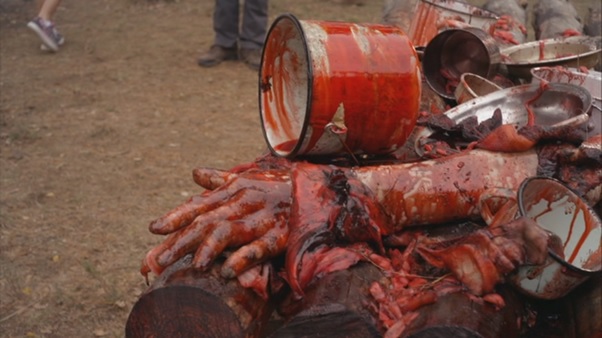 The CGI is pretty crap, but I like to think the filmmakers were aware of that, and were banking on it looking fake for the laugh factor. There is some practical work present, and it's fine, though there's an egregious goof with an impalement wound that changes sides. I don't know if that was intentionally bad, or just incompetent. Probably more the latter, given the movie isn't a silly 'so bad it's good' effort.

The acting is decent all-round. Not really any bad performances, and the cast all do serviceable jobs.

Now, let's get into the good stuff-Poppy Lee Friar! She's a super-neat actress who was in the awesome 2010 TV series Dead Gorgeous, as well as currently starring in CBBC show Eve. Point of fact, she's literally the only reason I bought this movie, as I otherwise have zero interest in this kind of material. She delivers a fine performance, and carries the film quite well! At first it seems like her mother is going to be the lead, but Friar takes over once the carnage starts, probably because the writers figured someone inexperienced stuck in this kind of situation would be more suspenseful than an armed and trained police officer. Two final things to note are her really good American accent (You'd never know she's British!), and how the casting department did a good job finding an actress who looks like they could be Elisabeth Röhm daughter! 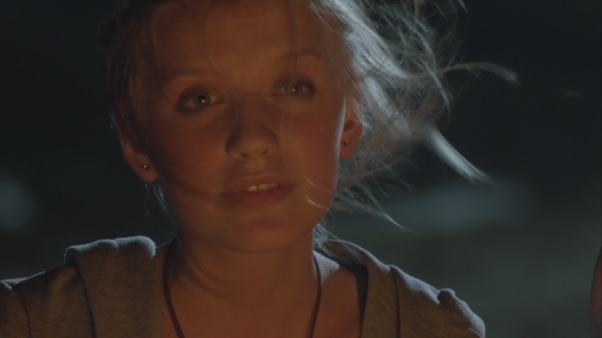 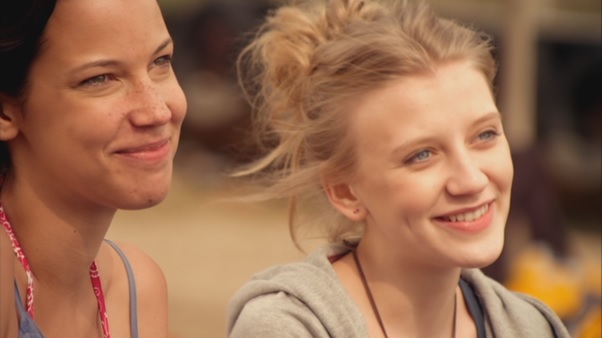 Speaking of accents, there are quite a few British ones in this movie. Some actors are just speaking with their natural accent, while others seem to actually make an effort to sound American, but slip sometimes.

Yancy Butler is entertaining as the almost-kinda Burt Gummer type of character, while the decent Paul Nicholls looks way too young to have a son as old as Max is! Robert Englund is entertaining enough, even if I didn't much care for his character, and he gets and ok amount of screentime. 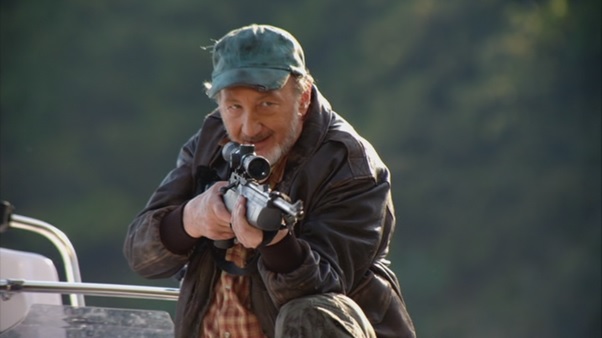 The direction here is ok, but unfortunately the camera shakes a lot! It also focuses a little too close to the actors' faces.

Lake Placid: The Final Chapter is an ok movie, and it's presumably a lot better than some of the other stuff pumped out by the SyFy Channel. If nothing else, it is worth watching if you're a Poppy Lee Friar fan like me...
Posted by Chris Hewson at 7:26 AM