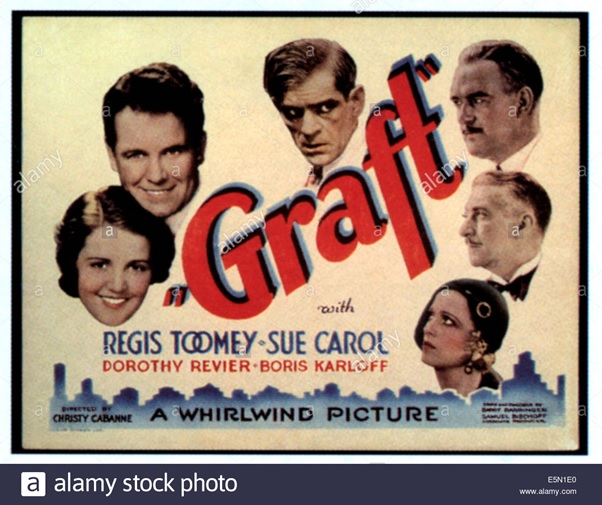 Ooh, this 1931 Regis Toomey flick co-stars Boris Karloff, and is called Graft? Could it be about Toomey playing a mild-mannered scientist who's the victim of a freak accident (or is it?), scarring him severely, and transforming him into Karloff in the process, so he sets upon a diabolical rampage for more and more skin, so he can be complete once more? Well let's find out... 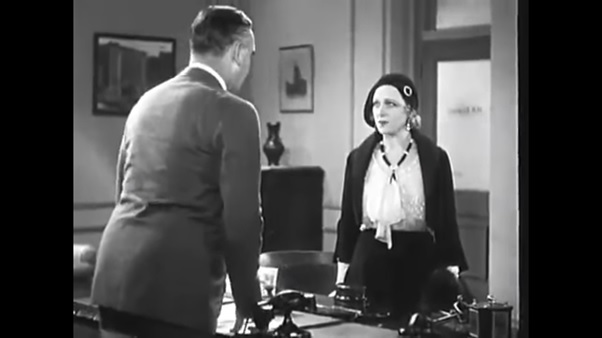 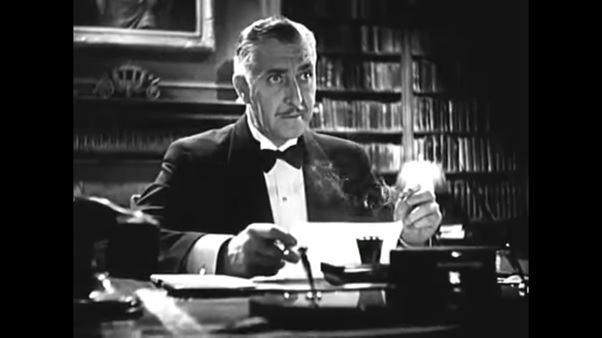 Cub reporter Dusty Hotchkiss has the scoop of a lifetime when he starts investigating the shady politician M.H. Thomas. Meanwhile, a former associate of Thomas' named Pearl Vaughan is threatening to expose his criminal activities and corruption, even going to the District Attorney. In a move of desperation, however, Thomas has his underling Terry murder the D.A, then kidnap Pearl. Witnessing what happened, Dusty seeks to uncover the truth, along with Constance, a young woman who was at the scene of the crime, and is the daughter of Thomas' rival...

At only 54 minutes (yes, really!), Graft is an ok film, but a little annoying. Its lead is a bumbling oaf who absolutely deserves to be fired! He's quite an insufferable little shit! Boris Karloff is the defacto main villain. He's not the head honcho, but that guy is just a suit, whereas Karloff is the intimidating hulk who gets his hands dirty, and more directly interacts with the protagonists. 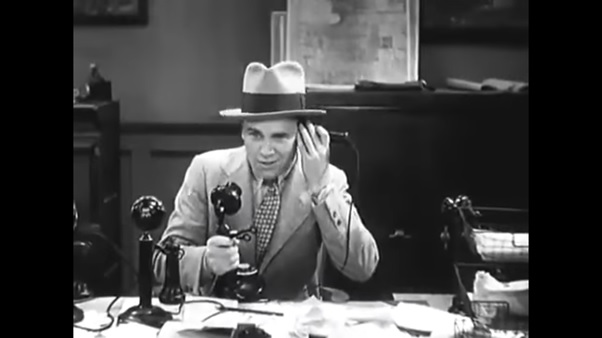 The worst moment in the movie for me is when the D.A. is shot, and Dusty, witnessing it, runs off and literally stumbles into the killer! He assumes Terry is a random Bystander, and the assassin is all too happy to play into that misconception, stating "Ok, I'll get the police" and walking off, and just like that, he's free. Following that, Dusty assumes the completely innocent Constance is involved in the murder, which not only screws her over, but also threatens to derail her father's political career! Unfortunately the rest of the movie isn't poor Constance gaining bloody revenge against him, and the other villains. Far from it, she ends up teaming up with Dusty, and falling in love with him in a pretty rushed manner. At least she gets a good slap in while she's still pissed off at him. Thankfully, despite the rocky start to their relationship, their teaming up feels natural, and well-written, and awesomely enough, Constance is the one who saves the day in the end!...Only for Dusty to immediately come up with the worst plan ever, just so he can be a glory hog! I can only see this ending in good! 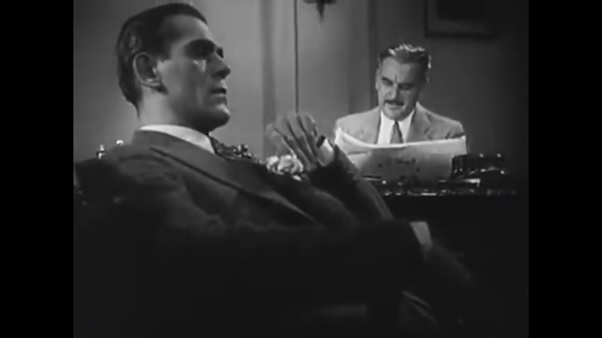 A couple of little things to note. First is when the police are investigating the house of the murdered D.A., and it takes them a ridiculous amount of time to find a bullet hole in the window. It took them so long that they'd basically written the case off, assuming the murderer was in the room, because there's no possible way anyone could've shot him from the outsioh wait, there's a bullet hole right here in plain sight in the window.

The most unbelievable thing in this movie is that it expects us to believe its small 20 year old lead can floor Boris Karloff with one punch! At least he loses the fight, so not too much credibility is strained. 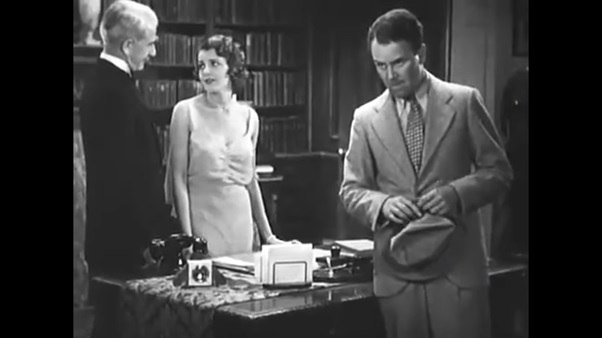 The direction is ok. Speaking of, the director is one Christy Cabanne. Ooh, could it be? A female director in 1931?...Nope, it's just a dude named Christy. *sigh*

The acting in Graft is all fine. Regis Toomey is better than in Framed (Not to say he was bad in that movie, of course). Perhaps the fact that he made around eleven movies in-between had something to do with that! Geez, they sure pumped films out quicker back then! One amusing-in-hindsight moment where he''s pretending to be a police officer.

Boris Karloff makes for a fun and intimidating villain, as you'd expect. Also, thankfully he doesn't attempt an American accent. Not that I think he'd do a poor job, but it'd just be really weird and unnatural hearing that kind of accent from him! 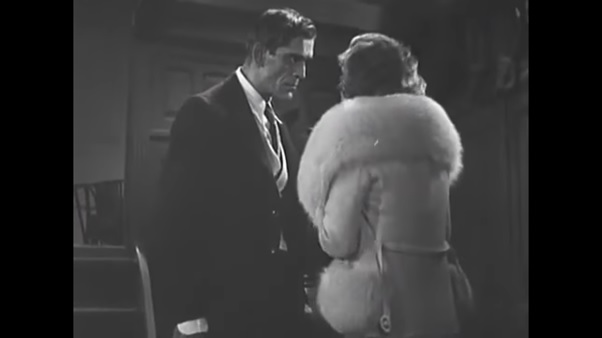 Apparently it was during shooting of this movie where Karloff caught the eye of James Whale, who thought he would look really good in the titular role* of a certain horror movie   If true, this would mean there was less than two months between Whale first meeting Karloff, and the release of Frankenstein, which would make me doubt the veracity of that story, if not for the fact that this was the 1930's, and all it took to make a movie was a week!

Finally, onto Sue Carol, who I apologize to for taking so long to get to, because she's one of the best performers in the movie! I liked her a lot, and she made for an entertaining and likeable lead.

An interesting tidbit involving the cast is during the ending credits, when we see their credits again, just as in the beginning, with the proclamation of "A good cast is worth repeating". 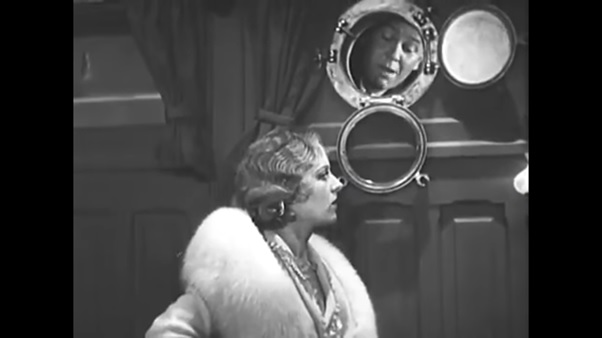 One last thing is the title-What the heck is it referring too? Obviously it's not about skin grafts, nor is it a journalistic term. As it turns out, I gave up my search too soon, and when I suddenly realized several weeks after the fact 'Oh, yeah, search under political terms!', that immediately yielded a result. Basically it means political corruption.

Graft is a decent little (and boy do I mean little!) B-picture, and at 54 minutes, you won't waste too much time by checking it out. Anyway, as it co-stars Boris Karloff, there was no way you wouldn't check it out!...
Posted by Chris Hewson at 10:17 AM