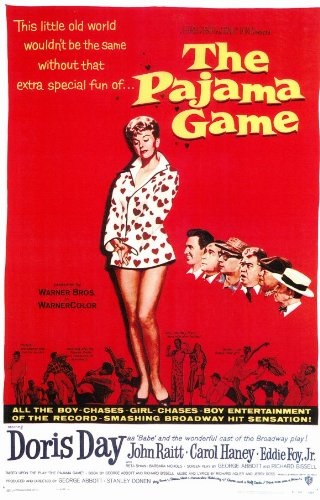 Just once I'd like to watch a Doris Day movie that isn't awful! Thanks to some horrid bad luck, I'd ran into a few terrible ones in a row! As stated previously, that first one (Send Me No Flowers) isn't all that bad at all, just mediocre, while the second (The Thrill of it All) is a disgusting pile of woman-hating crap. As for The Pyjama Game, we'll get into that!...

The workers of the Sleep-Tite pyjama factory are getting restless. Not getting the 7 1/2 cent raise they're entitled to, they consider striking. Meanwhile, Sid Sorogan has just been employed as the new Superintendent, and he couldn't have picked a worse time! To join the company, or to fall in love. He and grievance committee Babe Williams fall for each-other, but the internal strife at the factory may tear their growing relationship apart at the seams...

I am SO sorry for that awful pun! 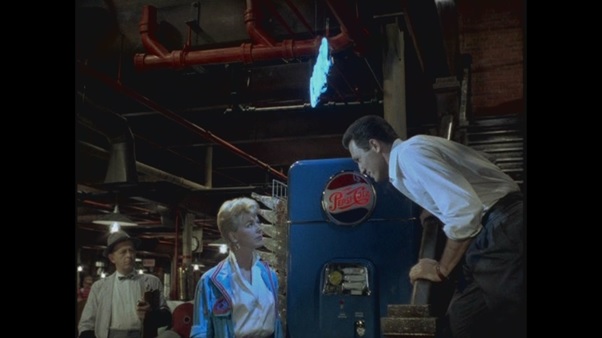 Pyjama Party is a tough film to sit through. The story's pretty lacklustre, and there's not a whole lot to it, nor is it resolved particularly well. Then there's of course the super abrupt ending. This again, in a 100 minute movie?! How long do some filmmakers need to end their damn movie properly?!

The story isn't what sounds the death knell for Pyjama Party, however. That would be the songs, and the characters. Starting with the lead-Sid Sorogan. This guy has the charisma of a fucking serial killer! There are weird moments like when talking with Babe, he says that "Personally I think a little physical punishment is good for people once in a while!", then immediately asks "How about a date?". His attitude is all over the map, like a couple of scenes later, when he asks Babe if they can stop fighting. Dude, you never were! And in that same scene, he asks her "Don't you wanna be my girl?" and then immediately asks demandingly why she hasn't answered the question, despite barely a second passing. Thankfully he stops being creepy and unlikable after a while, and just uncharismatic and boring. 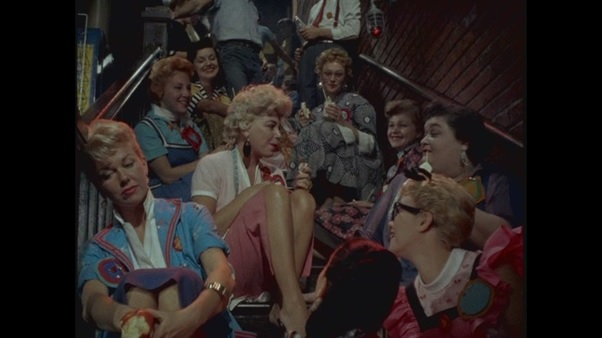 Babe is an ok character, but unremarkable. As for the romance between her and Sid, it goes from Babe's reluctance to get into a relationship, to them getting together anyway, then instantly being broken up by conflict at the factory, just as they were afraid of. Everything in this romance happens too quickly! It's also annoying how Babe gets angry at Sid for firing her, even though she knew exactly what she was doing when she deliberately destroyed company machinery right in front of him, basically forcing him to sack her.

Speaking of sabotaged equipment, that's totally what the union do to try and convince their boss to give them the raise. Assholes, striking is fine, but actively destroying stock? That's just being felonious dicks!

There are other moments throughout the movie that are odd or uncomfortable, like the oddly unpleasant knife throwing scene, or the part where the jealous factory Vice President Heinzy tries to murder his girlfriend Gladys, scored to whimsical and humorous music-He's trying to STAB her to death! Oh, and in-case you're wondering how that's resolved, why, by them getting married, of course! Why, what'd you think was gonna happen... 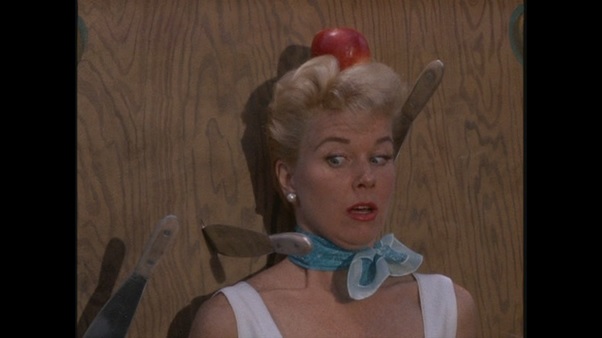 The music in Pyjama Game is truly awful! There are some decent numbers, and not all the performers are bad, but most of the tunes are screeching, and hard to listen to. Even worse, the lyrics are frequently extremely repetitive. For example, "I'm not at all in love, no not at all in love, not I" or "I would trust her, I would trust her, by George I swear I would trust her", and "I figured it out, I figured it out, with a pencil and some paper I figured it out". And then there's one number which just *repeats* the same damn verse over and over again! The worst song in the movie by far is There Once Was a Man, wherein both leads sound totally eardrum-rattlingly dreadful!

And now we come to the worst aspect about The Pyjama Game-It makes Doris Day sound grating! There is a cold level of hell deeper than any other reserved for anyone who does the obscene act of making Doris Day sound unbearable to listen to!

There are a couple of numbers that I have some more to say about. First up is when Sid ask Babe out on a date. She respectfully declines, clearly sorry, as she has feelings for him too, but can't act on them due to potential conflict of interest. This leads to Sid singing Hey There, which is totally ill-fitting for what's just happened! Its lyrics tell of a man despondent at being in love with a woman 'with her nose up in the air' who doesn't care for him at all, is a cruel puppetmaster, who wouldn't pay attention if his 'strings break', etc. The whole number feels off, because Babe does care, and certainly isn't some mean harpy as the lyrics would suggest!

The I'm Not At All in Love song is frustrating too, as it's all about Babe's friends gushing about how she's totally in love with Sid, which she denies strenuously, but in a 'the lady doth protest too much' way, showing that she actually is smitten. This is another example of the film moving too fast with the romance! Sid and Babe had literally only one short scene before that point, and not on positive terms! 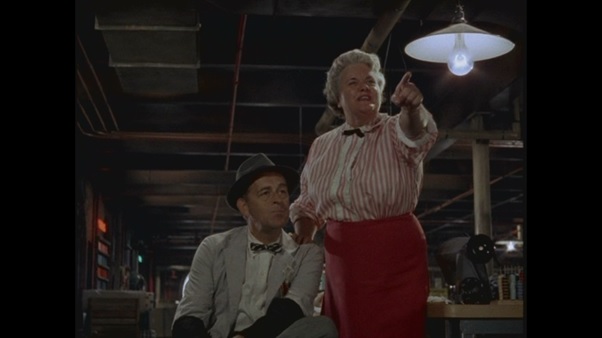 Another song that bugged me was I'll Never Be Jealous Again (or alternatively, Picture This, as I like to call it, as that's less words). It's performed by Eddie Foy Jr. and Reta Shaw, and is about her trying to cure Heinzy's jealousy. She sings scenarios where Gladys is showing behaviour that could be misinterpreted negatively by Heinzy, and then he sings about how he would trust her. It's good in theory, however the problem is that in these fictional scenarios that Shaw puts forward, Gladys actually is cheating on Heinzy, and this makes the whole song fall apart as far as I'm concerned.

Moving on from the singing, the acting is just as good. Which is to say it's quite bad! The main performers do decently for the most part, but even they're poorly directed at times, like John Raitt's creeptastic demeanour. Some actors are as shrill as the music, one screechy woman in particular (Barbara Nichols). Either she actually sounds that annoying, or the director wanted her to sound that bad as a joke. Well if so, it's not funny! And doing an incredible disservice to the actress, too. 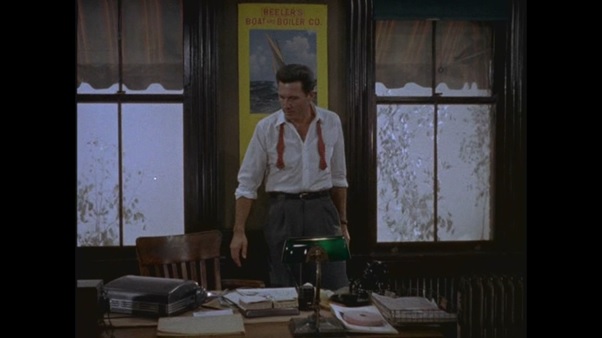 The choreography in Pyjama Game is pretty decent at best, embarrassingly poor at worst. The first half of this movie is incredibly stagey. It's quite an awful movie in that regard, as it's supposed to be adapting a stage play to the big screen, yet does nothing with the power of cinema. The worst scene visually has got to be the first rendition of Hey There, with the huge windows overlooking a white void! This moment is seriously comparable to an Ed Wood production, except worse! Thankfully from the picnic scene onwards, things get a little better (and we actually see that the outside world does indeed exist). Not by a whole lot, but it feels less like a stage play and more like an actual movie, with some neatly filmed moments here and there too (such as Doris Day singing from the mirror in the Hey There reprise). 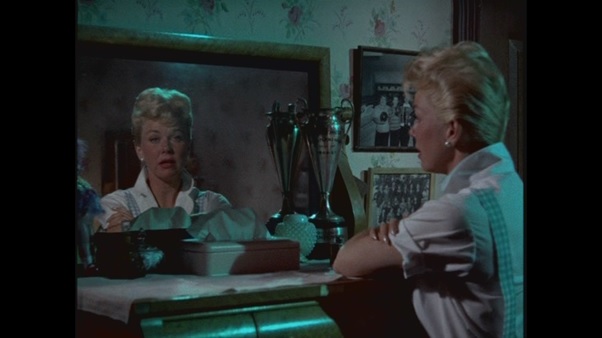 Believe it or not, there are actually things I liked about this movie. Not many, mind you, but some. For a start, the film has good pacing in regards to the distance from each number to the next. Secondly, I like the romance between the characters of Mae and Prez. It's sweet seeing a film portraying a guy falling for an overweight woman and not caring a bit about her size. I don't think the film even addresses her size in any way. It doesn't view it as anything to poke fun at. They're just two people who like each-other, End of story. It's refreshing! Finally, I mostly like the song Hey There. Not so much its placement (for reasons mentioned above), or the lacklustre and somewhat listless reprise by Doris Day, but the song itself sounds really nice. particularly the instrumental version of the track, which you hear a few chords of here and there throughout the movie. It's reminds me a bit of the theme from A Summer Place. As for Picture This, while I wasn't so much a fan of the song itself for reasons mentioned above, I really dug the segue from the bridge to the final verse, which was really smoothly handled. Finally, the Steam Heat song was ok, and kinda neat with the gender bending Carol Haney. 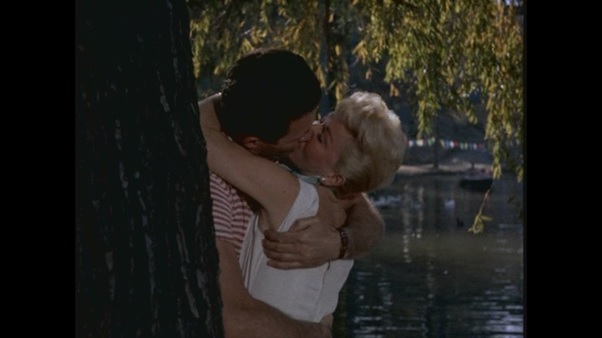 To finish, The Pyjama Game (and NO, America, I will NOT spell 'pyjama with an A!') is a terrible movie, and an even worse musical! It's nothing but a tiresome, grating, repetitive mess...
Posted by Chris Hewson at 9:20 AM