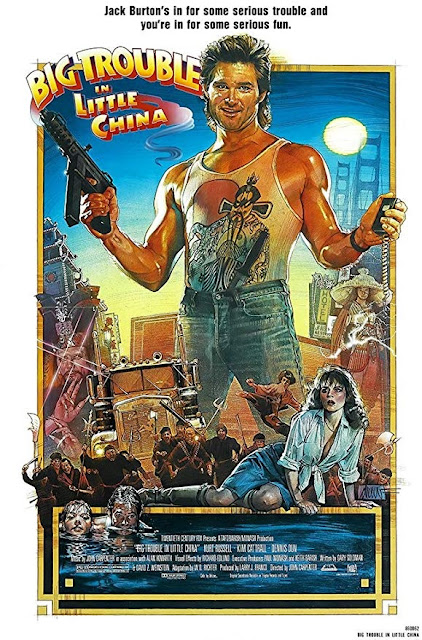 Smart-mouthed and uncouth trucker Jack Burton is in for the delivery/ride of his life when he joins his friend Wang = to met his fiancee Miao Yin at the airport. The girl is kidnapped by a gang, and Wang rushes to try and get her back, getting the two embroiled in a magical street fight in the process. Still having no idea what's going on, Jack is = drafted into the fight against ancient and evil sorcerer Lo Pan, who will stop at nothing to break the curse that limits his powers, and =... 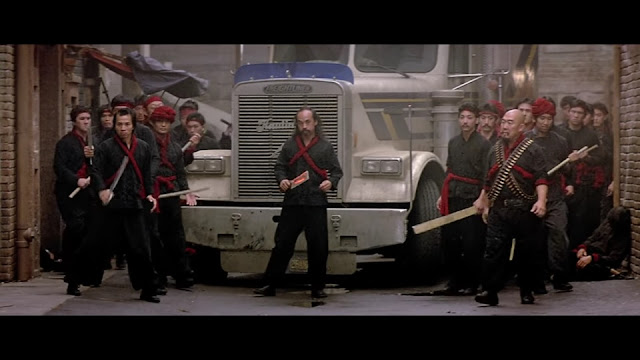 Big Trouble in Little China comes from the mind of John Carpenter, truly showing off the man's creativity, as well as unwillingness to be constrained by any single genre. The movie is both a love letter and a parody of all the old Hollywood films focusing on the Orient. This is a great example of parody done right, because it comes from a place of love. It doesn't look down on  Just because it's taking the mickey out of old tropes and cliches, doesn't mean it's [shitting all over] their very existence.

The story is a thoroughly entertaining one, with plenty of depth and = to it, both in and out of universe. It really taps into the kung fu craze at the time, when Americans went gaga for all things Chinese, and for this reason I'm glad the film was updated from the original script's Wild West setting to the modern day, which the = would find most relateable. What person wouldn't wanna believe there's a world of wonder and mysticism right outside the door? 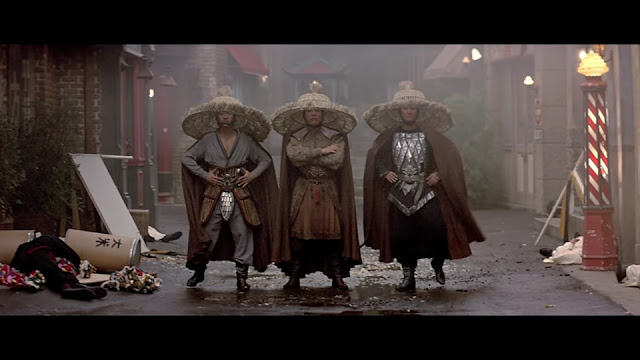 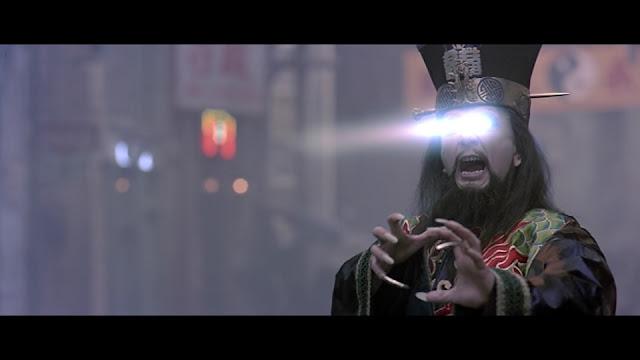 The characters are an interesting and fun bunch. Jack Burton is ostensibly the lead, but that's the main joke of the film-He's useless! The poor schmuck is in way over his head, but bless him he keeps trying ,despite often failing, knocking himself out, or =, while the sidekick Wang is much more capable, as well as connected with the events happening. This is a great subversion of regular films, and very funny. Despite his incompetence though, he's never genuinely terrible ,and he's always great to watch.

Lo Pan is an awesome villain, interesting both in appearance and personality. The guy's a real creep, and you buy that he's an ancient evil. The three Storms are an imposing presence, despite their lack of dialogue. Gracie Law is a nice female lead, always getting plenty to do, and getting a well-crafted relationship with Jack. While her friend Margo is a little superfluous, she's a nice presence anyway. Same goes for Wang's friend Eddie.

The movie is very diverse, too. Besides Kurt Russell, Kim Catrall, and supporting player Kate Burton, the cast is 100% Asian, and it's neat! It gives everyone so  much to do too, from acting, to martial arts, to =, it's great. The cast members were reportedly really happy to be working on a film with an atmosphere like this, believing it gave them far more opportunities than regular Hollywood fare.

Big Trouble in Little China also delves into certain facets of Chinese-American culture, including the place of one's traditional beliefs when you're raised in a different country. A real problem for many people is that they feel they have to throw away their culture to fit in [and be like everyone else]. And some get so carried away that they discard genuine and important = for fear of looking stereotypical or obviously 'different', just so they're not judged as = by other Americans. This film challenges that, showing Asian-Americans who try to = being faced with the [truth] and embracing their =, on both sides of the map. 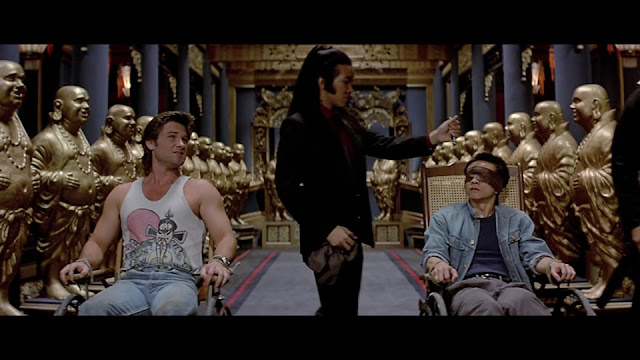 Moving onto other themes, this is a film of dualities. On one hand you've got Jack, the ignorant white dude who knows nothing about Chinese culture, and then you've got Gracie, who's more   Then there are characters who sincerely] quote Oriental proverbs, as well as ones who jokingly invert them. And there's its treatment of Jack, who's simultaneously a joke, always failing to get anything done, but respected for trying nonetheless. Even though he may be a hapless dope who's really only along for the ride, the other characters not only tolerate him, but appreciate him, [and you can see why]

The acting here is all neat! Kurt Russell does great as the lead, both as a genuine action hero ,and a parody of one. James Hong is a great villain, devious and creepy. Dennis Dun is likeable as the 'sidekick', while Victor Wong is always an enjoyable presence. Kim Catrall is a fun and spunky female lead, often proactive and never useless. 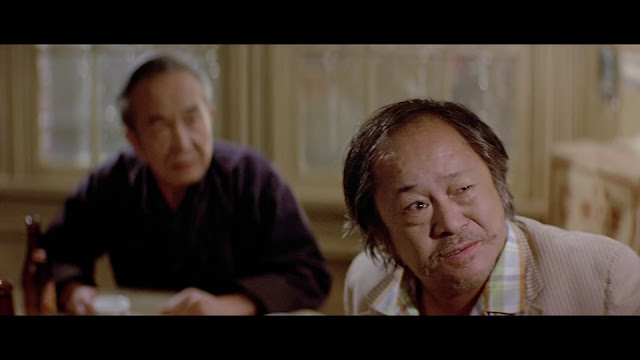 The fight choreography in = is superb. Nothing is ever too fast or slow, nothing is unconvincing, and the characters spar like =. The more fantastical elements don't get in the way of the down-to-earth action  to much, and are even enhanced by it. The flying swordfight for instance is expertly handled!h

The effects in   While they might get a bit much for some people, I felt there's mostly a good balance between the effects and the story. I never felt it focused too much on being flashy at the expense of the characters. There's many extremely well made moments here, from the bolts of lightning characters throw, the freaky = Lo Pan has, the flying, and the various monsters we see. The film has quite a bit of restraint only using these monsters so sparingly ,but I feel they =. You don't wanna clutter things up too much. There's so much more to mention, and you've gotta see the movie to experience it all. 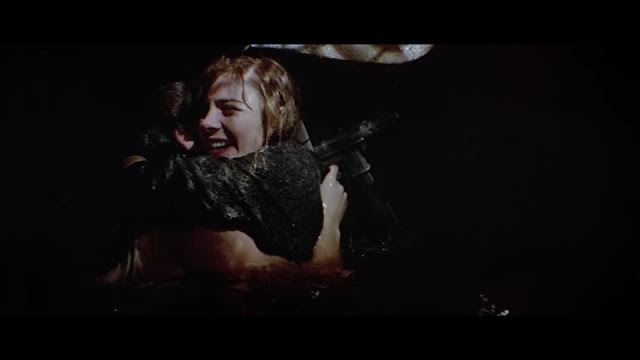 The set design is exemplary too! You really buy there's a = world underground. From all the little statue and curtains, the delicately painted murals and walls, and he = at the end with its giant skulls and =, the crew of this film really went all out, and deserve all the praise they can get.

The soundtrack here is great. Full of Oriental tunes that often mix both old and new instruments. We get classical tracks, spiffy modern ones, and the best of both worlds. The best = of the film is by far the ending song by Carpenter's own band the Coup de Villes, singing the title song. It's a great track, really getting you in the mood for meeting Chinese sorcerers/casting Chinese magic and fighting evil!

Now, Big Trouble in Little China may be a great movie, but is it without flaws? For me, no. I have a few issues. The first is that for all its base simplicity, the story is incredibly muddled. It's not hard to tell what's going on per se, and the story itself is always fairly straightforward, but it's crammed with so much stuff, that it can sometimes get a bit overwhelming, like we're accidentally being shown the fourth movie in a series. 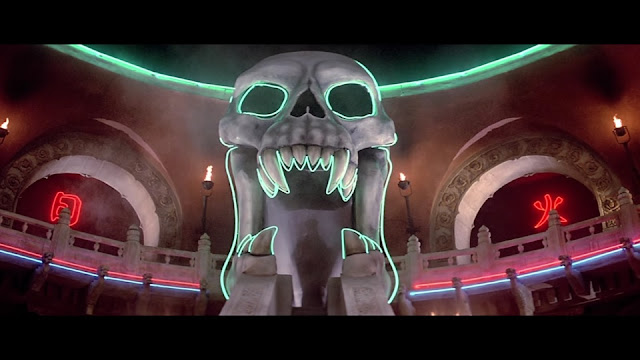 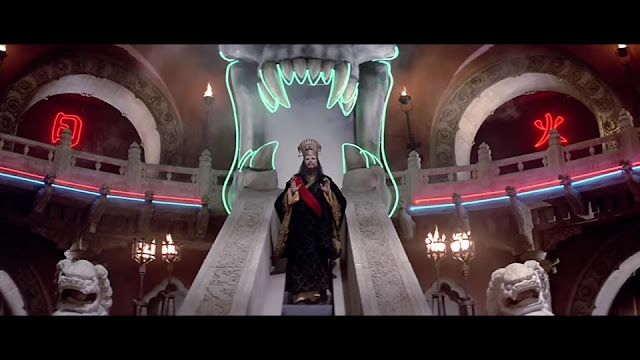 Another issue is certain characters feel a little shafted. Mainly Miao Yin, who barely appears, and is often just sleeping or standing around when she does. She barely even gets a line of dialogue! I'm disappointed, because I wanted to get to know her better, and understand why Wang loves her so much, [and is willing to go through all of this to save].

And lastly there are the deaths of certain characters. Lo Pan's is great in everything but its speed. It's too quick! I get that's probably the point, but it happens so quickly that you're just left with a feeling of "We're all set for the final bat...Wait, is that it?". I wouldn't mind such a =, but I wish they had've made it at least a little longer. Then there's Thunder's death. One of the film's most famous moments by far, it also comes with little explanation. I was also all set to criticise Lightning's death too, but it turned out I misremembered things. I remembered him showing off with lightning bolts, which causes a cave-in and kills him instantly before he can even fight the heroes, but actually no, that doesn't happen! Phew. Again, I'd get the joke of killing off a big bad in such an anticlimactic way, though it would annoy me, and I'm glad his demise is at least a little more interesting. 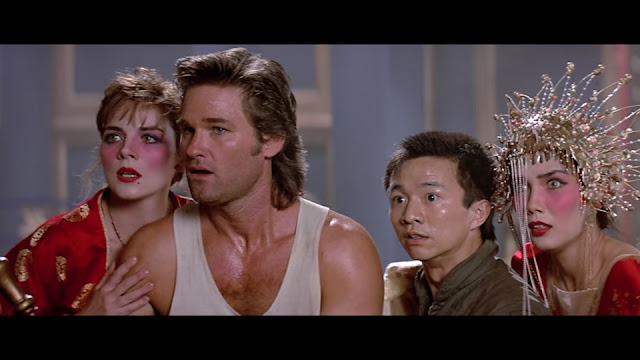 Whew, well that about does it for me. To finish, Big Trouble in Little China remains a real gem. Whether you're just looking for a fun action/comedy flick, or if you even have a passing interest in Chinese culture and entertainment, this is the perfect film for you...
Posted by Chris Hewson at 2:59 AM