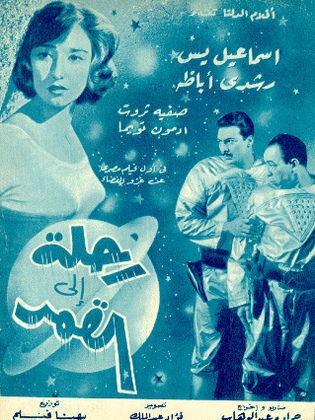 Preparations are being made for the launching of a rocket to the moon, and astronaut Mr. Rushdie and grizzled scientist Dr. = are giving the ship a routine inspection. Meanwhile, taxi driver and would-be reporter Ismail sneaks onboard the rocket to snap up some pictures, but is caught by Captain = and the visiting Mr. Rushdie. Ismail inadvertently sets the rocket off, and it flies up through the stratosphere and heads for the moon. Now stuck for the time being, the trio decide to buddy up and explore, eventually finding far more than they expected... 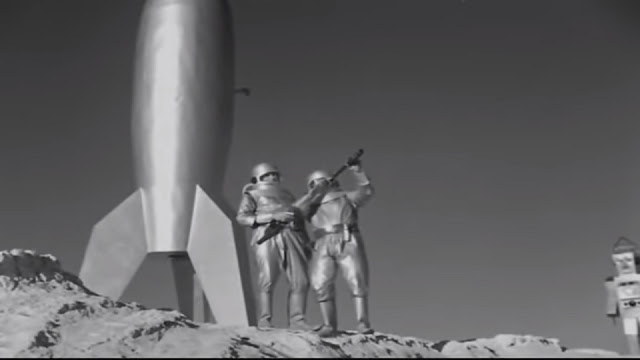 Journey to the Moon is a surprisingly good film! Seemingly inspired by various types of American B-movies/
It's also a comedy vehicle for the = of Ismail and =   While they're definitely =, their buddy dynamic doesn't overtake the picture to a detrimental degree

Just when I had almost reached the hour mark, I joked about the = bumping into a society of women next, but since there wasn't much time left on/of the movie, I didn't think there would be, but sure enough, this lone [guy] is revealed to have raised several dozen hot young women during his stay on the moon!

A problem/amusing if cringey quirk with lots of old sci-fi b-movies is of course the sexism. How does an example from another country fare, you ask? = well, actually! There is one [slightly/rather] creepy moment courtesy of the lead (he asks his new moon girlfriend to marry him, and when she asks what that/marriage is, he responds with "I'll tell you when we marry"), but  since this is a comedy, you get the impression that the movie's not really on his side when he's like that, such as the [lie detector adjacent romancing scene.]

Something I felt the movie really nailed was tone. It's mainly a comedy, but the mine scene with the = was pretty heavy! And the movie bounces from that = into a moment of = when the other heroes are almost stranded, and into a really triumphant ending, that's= upbeat.

I'm also happy/pleased that the movie has an ending. It doesn't just stop with an abrupt The End after the basest plot points are wrapped up. 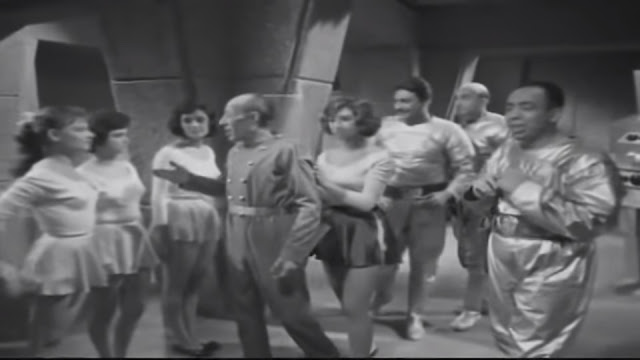 Whether or not Ismail Yasseen is enjoyable or annoying really depends on the viewer. His acting style is a weird one, akin to being drunk. He's very expressive with his face and other visual [actions], to a talented degree. Rushdy Abaza is a more traditional good looking hero = (although my Jordanian friend says he's a terribly over-eager kisser). Edmond Tuiama is fun as the somewhat eccentric captain, who felt like a mix between Captain Haddock and Professor Calculus from the Tintin books. The rest of the acting seems fine, I guess.

One little random casting note is the pudgy guy we see in an observatory early on. Because he looked like an Egyptian Lou Costello, I was under the impression he'd be one of the leads! He's not though, and in fact the two stars don't come across as a ripoff of anyone at all, let alone Abbott and Costello. 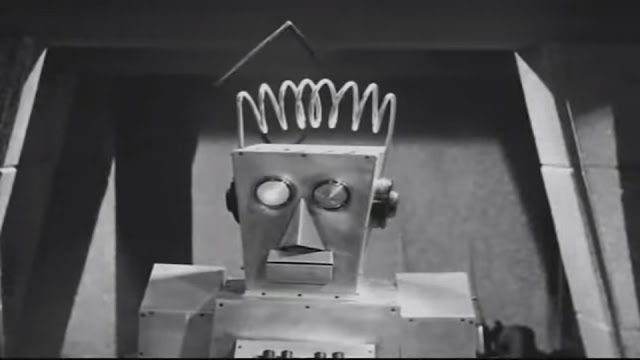 The effects here are = impressive. The model for the Earth looks a bit fake (although maybe the black-and-white detracts), but the moon is spot on. As for when the characters/cast are actually on the moon, there are 'slight' liberties taken with science and reality, but =. The big robot looks goofy, but well-made goofy, and the make-up for a bunch] of certain characters] who show up later is really good! The set design is ok too, never looking unconvincing, or wobbling/falling apart, which I consider/take as a good sign. Finally, the rocket looks = good! Not the most state of the art looking thing, but they really did build a rocket-sized [prop] for the movie, which I commend/applaud. 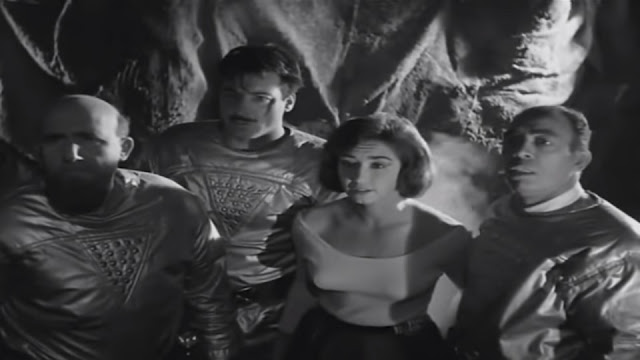 Journey to the Moon is   entertaining example of a couple of Egyptian genres, and is a good showcase for two of Egypt's most well-known classic actors. 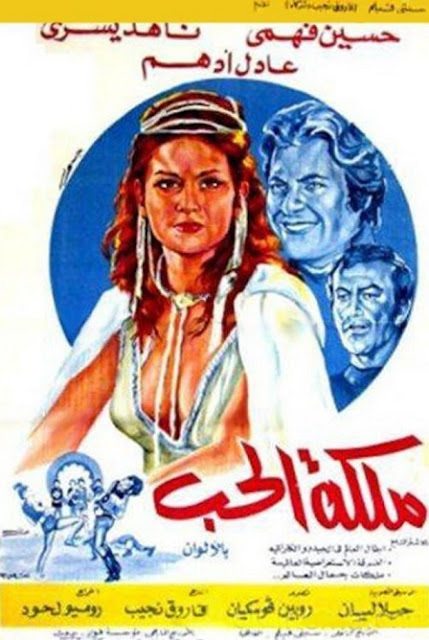 =, =, and = are three men on a scientific expedition through time, testing a new invention. It seems to work fine, until a sudden explosion causes the vessel to depart before everyone's ready. Hurtling back through time, the guys find themselves in the matriarchal society of Atlantis, where a frosty welcome gives way to friendly interactions. They still want to go home, and =, but will their new host let them, or are they now prisoners?... 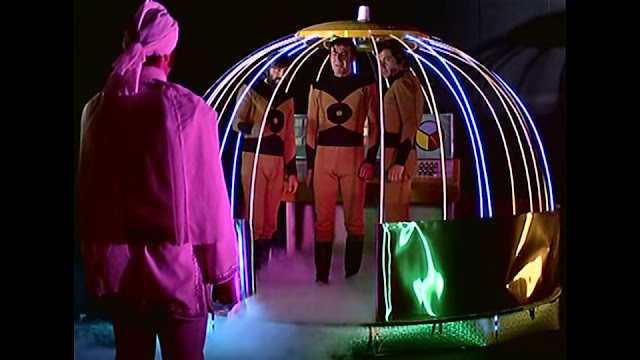 Queen of Love is a sci-fi adventure with hints of The Time Travellers]/Journey to the Centre of Time, although nowhere near as depressing. The movie is simple enough to be understood by anyone, with its pretty universal concepts. Although some elements did leave me a little confused. Not knowing much Arabic [] I was left unsure of whether or not the heroes time travelled, went to an alien planet, or teleported inside a hollow Earth.

You might be forgiven for not realising Queen of Love is a sci-fi movie at first, since the first/opening 10 minutes are devoted entirely to an Arabesque musical dance number! It's a good song, but geeez! I don't suppose there's any particular reason we have to watch the leads watching a stage show as an introduction? And how come they're = 10 minutes before an important scientific experiment, anyhow? 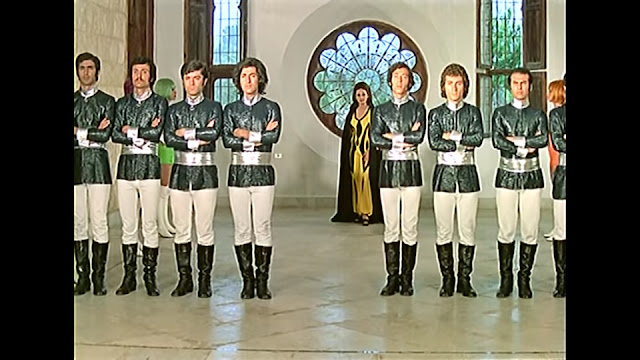 Once this diversion is over the film is actually pretty quick in getting to the biscuits, and the heroes zap into their time travel uniforms like magic, then begin the experiment. They're immediately taken to the past, in...Atlantis? They immediately make a = impression on the locals, who promptly beat the crap out of them in a surprisingly violent scene! But once that's all over, the two parties seem pretty friendly. These prehistoric humans all conveniently speak perfect Arabic too. How helpful!

Despite the = in their introduction, the movie = drops all sense of conflict for almost an hour, and focuses on the crew's new life, and new romances. I was wondering if the film would ever =, and it does eventually, though a little too late. This isn't a long movie at 80 minutes, and I'd never/I wouldn't say it's ever boring, though it does feel a little aimless when the majority of the screentime is devoted to the time travelling heroes going on dates. 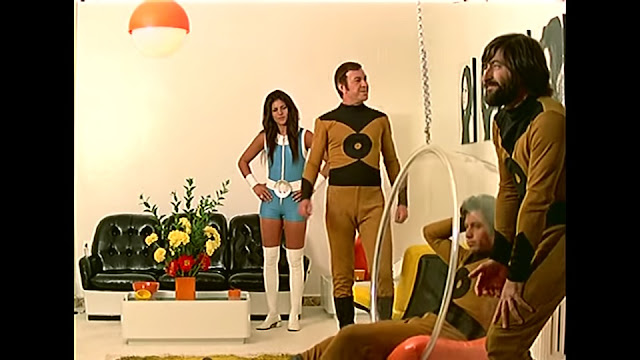 We do finally get a form of conflict in the last half hour, when the heroes realise they're not allowed to leave. I wasn't even sure if the queen is portrayed as that bad, she just doesn't want the trio going away, so she hides away their time machine. They're helped by their rebelling dates, fail, get comfortable again =, and then a volcano suddenly erupts when the story needs it to.

Where the film starts getting plain weird is in the last act. When the heroes are captured when =, we're/they're treated to an impromptu dance by balaclava-clad women. Then there's a scene later on when the queen and one of the heroes have sex in an outdoors bed, while a group of chanting monks sing through the hills.

The ending to Queen of Love is where things get a bit =. It's not too bleak, and the heroes are ok, but it is still a bit of a downer! It's like the writer wanted a =  I get the reasoning behind it, and it makes sense, = and thematically, so I won't call it lazy, but I personally didn't like it that much. As for the final minute, it wraps everything up pretty speedily, and I didn't quite get the final moments. 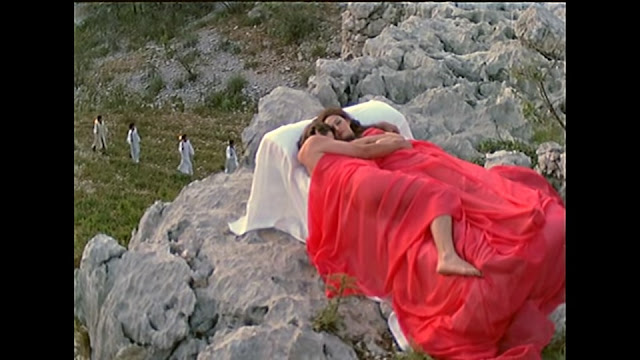 The time machine itself doesn't really play much of a part/role in the story It gets everyone to Atlantis of course, but other than than it kinda fades into the background. I suppose this isn't a big deal, but it could've been neat if it had played a bigger role in events.

The design and location work of the film is a bit strange, but mostly in an amusing way. The throne room looks like a community parish =, while elsewhere are hanging bubble chairs, pop-art prints of the actresses face, and =, with the feeling that the interior decorator was Andy Warhol. Who knew that ancient Atlantean's had this much =! One set near the end just feels like a modern room with a few curtains up to =. The most impressive part was the lakeside party, which was spectacular! 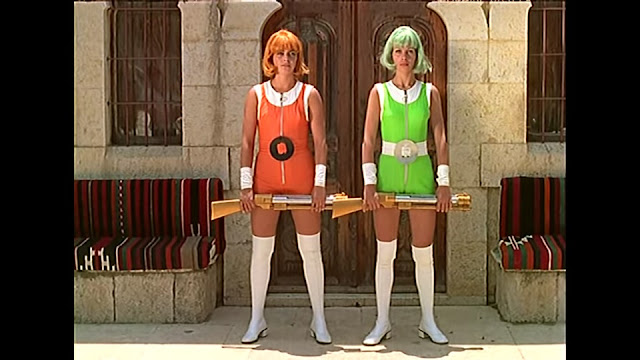 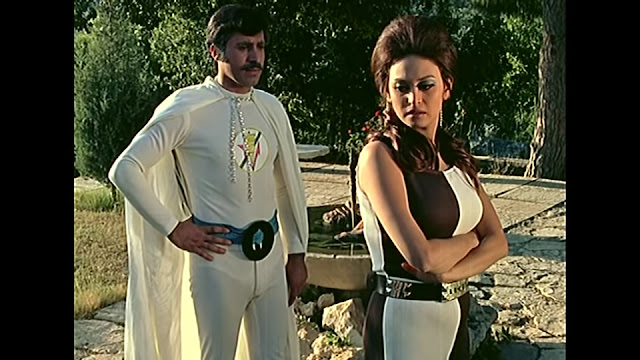 The fashion here is kooky too! It's very colourful, with actors not afraid to rock =,  and capes! Even the three time travellers have their own snazzy uniforms, with a nice orange and black colour palate. I'm glad that this film isn't afraid to look silly.   The modern day bikinis do look out of place though

The main trio of actors do fine jobs in their parts, and each look distinct from the other, which I appreciated. I was a little confused as to whose love interest was who, but that's not a big concern. I liked the little girl. She's slim and tiny, but packs one hell of a punch! The main cute girl is nice too.

Nahed Yousri looks exotic and alluring as the queen, and gets across both firmness and tenderness, making for a decently layered performance I'm glad she gets more to do than just stand around and look pretty 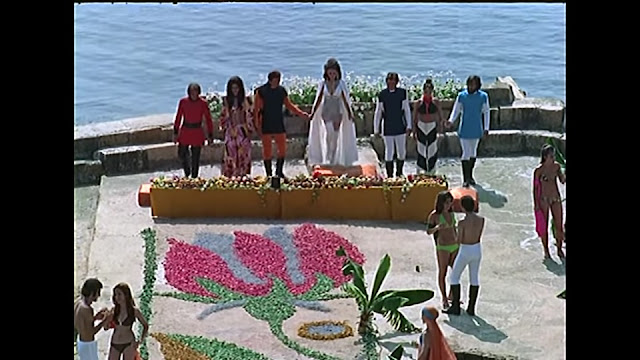 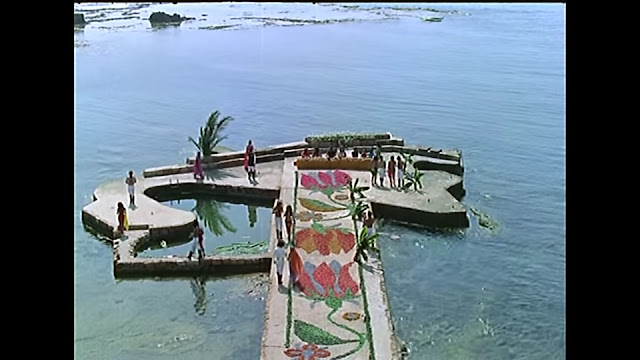 Queen of love excels in its visual department, with some great cinematography, interesting direction and framing, and a real sense that the director wasn't just phoning it in.

When compared with the older U.S. productions that inspired it (films such as Cat Women of the Moon, Fire Maidens from Outer Space, or =), Queen of Love exceeds them considerably, though this does have an unfair advantage of coming out 20+ years later. That's actually one of the more interesting things about the film to me. Either the Arabs got these movies a lot later than we did in the West (Journey to the Moon proves they didn't), or such films were still popular/accepted even as late as the 1970s. How neat! 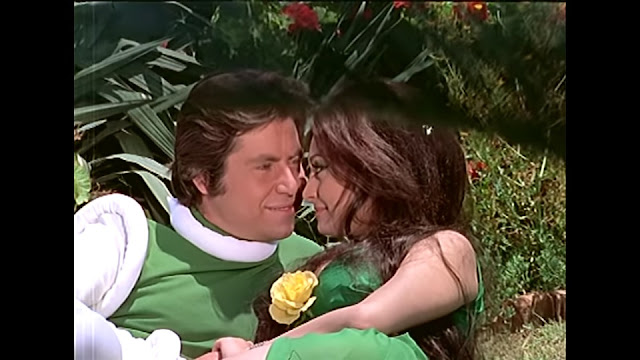 Lastly, there's the music. There's some pretty nice = here, which fit the locale well, with its lush serenity and =. The songs that pop up every now and then are good. The one at the beginning is probably the best, though it does go on a little too long. It never becomes painfully repetitive, though cutting it off sooner would've been recommended. The choral song during the bizarre sex scene kinda fits, and has a good ethereal quality, which stops you from shaking your head entirely at that scene.

Queen of Love isn't that great a movie[], and falls into a few of the same pitfalls as the older American movies of its type, but for what it's worth it exceeds = greatly, and is a perfectly fine film, as well as a good introduction to Egyptian sci-fi. 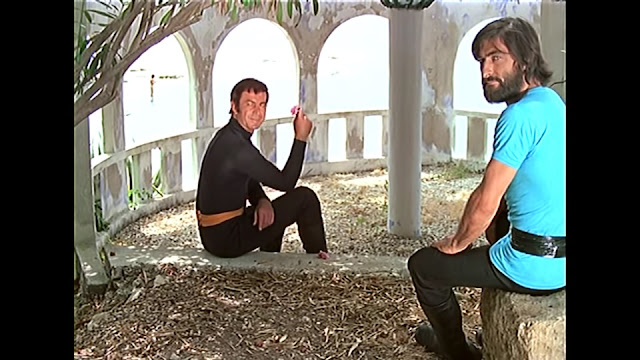 Overall, these two films are both equally good introductions to Egyptian science-fiction. Neither may be what everyone would call A-pictures, but I never consider that important as the quality of the film itself, and how much fun it is. Both of these deliver in one way or another, and show off how the Arabs/Egyptians handle such a = genre...
Posted by Chris Hewson at 10:59 PM