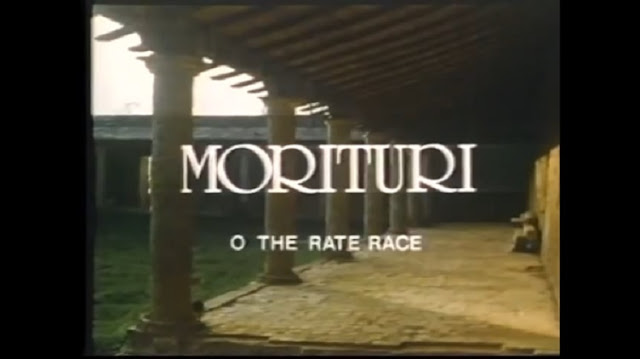 Businessman Ray Valerio is desperately in debt, and needs to pay off millions to stay afloat, and out of jail. To this end he reluctantly accepts the twisted offer from a cabal of rich elite, to take part in a game to the death with a psychotic ex-soldier named Paradise.

Marking the first Venezuelan film I've ever seen, Morituri (or The Rate Race, whatever the heck that means) is a politically charged take on The Most Dangerous Game. Man hunting man for the thrill of it. Where this differs is the plot and execution. 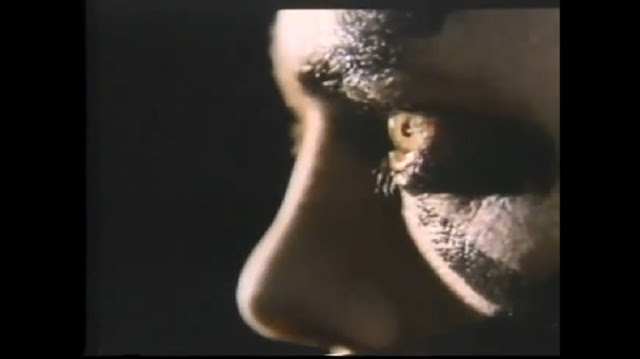 The movie is paced decently in that it's never boring, but it is half an hour longer than it needs to be, and it's very unclear how much time this is supposed to take place over. Some 24 hours! It feels like the film takes place over a week of 24 hours!

The biggest problem I feel the movie has is the main conceit. There's a reason these kinds of stories all take place on islands or other isolated locations. Because there's no backup, no escape, and no diversions. Caracas though is a big city, where you can do whatever you want, hide wherever you want, and never be found for years! There's little suspense as Ray just ambles around the capital, occasionally scuffling with a random guy. 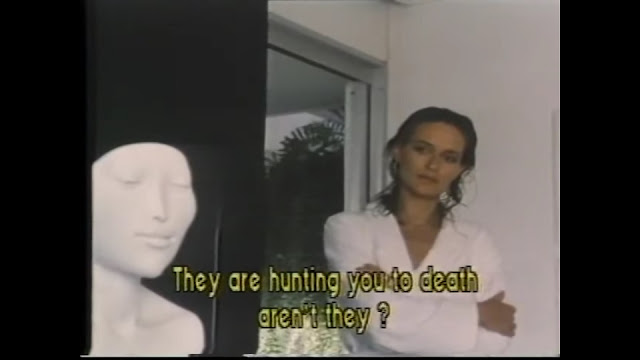 Moving onto the characters, Ray is a decent protagonist, though the film does a poor job of establishing who he is, as well as other parts of his life. We never get to meet his daughter Isabella (we don't even learn this occasionally mentioned person is his daughter until = minutes in), and we never find out why he borrowed so much money, or what compels him to be such a =. The weirdest thing about him is the sudden reveal of him being an apparent Karate master in the last third. 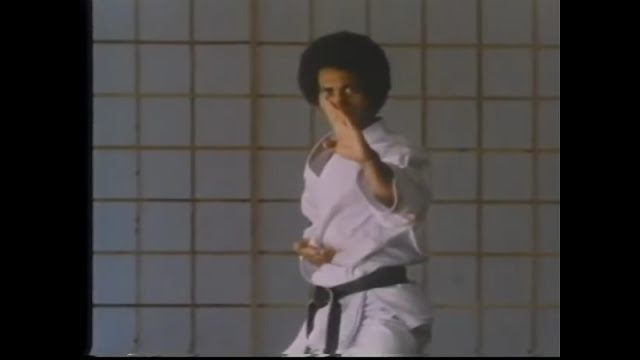 I found the villain Paradise to be pretty lacking. He looks cool, and what we hear of his personality is neat, but we rarely ever see it, and aside from taking a couple of potshots at Ray and blowing up a warehouse offscreen, he does practically/next to nothing himself, instead outsourcing the job to random goons. Talk about disappointing, I thought he was a lone hunter!

Where his character is more interesting is in the themes present, of soldiers/veterans who came out of the war all wrong, conditioned to kill and driven mad by their training, what they experienced, and what they had to do.
but actually this predates Rambo's action phase by about a year, so rather than an inversion, this must've just been exploring the same themes that First Blood sincerely tackled. 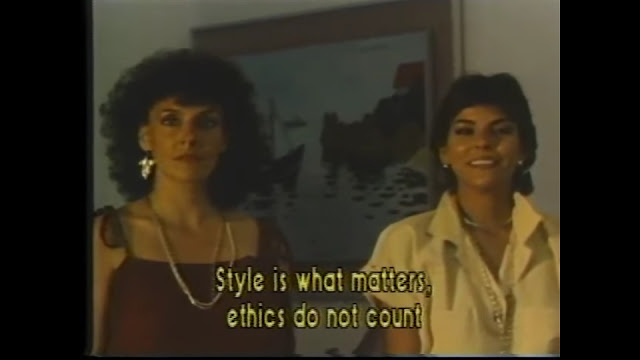 And most importantly is the cabal of rich freaks. They're a diverse bunch, with no two alike (except for the women, who I kept getting mixed up), and all bad in various different ways. The film focuses so much on them that both Ray and Paradise suffer as characters because of how much screentime these assholes take up. I found them all to be a mix of 'love to hate them' baddies, somewhat creepy, and genuinely annoying.

Lastly, we occasionally get some other supporting characters, namely the Colonel Bouvier, Paradise's former CO and investigator to the mysterious goings-on in the city. As the man who turned Paradise into what he is, the Colonel's role in the story could be an interesting one, though the film doesn't explore it that much. 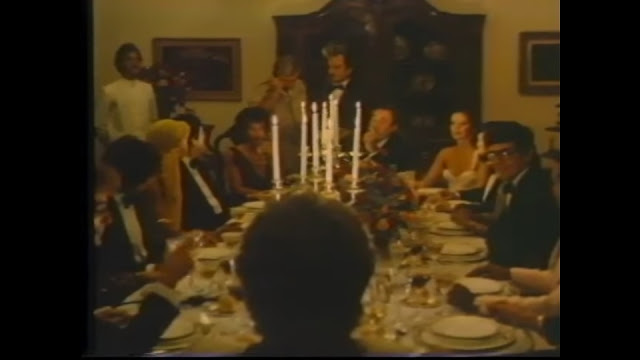 The most notable thing about Morituri is that it's chockablock full of political commentary. I'd heard that it's all very unsubtle, and this is true, though it wasn't quite as bad as I was expecting. It helps that a lot of what's being said is true, even if it's delivered in a hamfisted way, and it coming from Venezuela gives it leeway. Those poor Latins are allowed to be unsubtle!

The biggest problem I had with it is that most of this commentary comes from the mouths of these utter bastards, making the message feel a bit [diluted]. This is at its worst in the final speech before the big fight. The lady speaking lectures of such vile acts and hypocrisy...yet who is she? If she's here, surely she's part of the gang too? It also hurts the message that we never see Ray acting like them, and I was actually surprised to learn he even was a businessman, since he acts nothing like one.

Thankfully Morituri doesn't take itself too seriously, and has a wicked sense of humour at times, reveling in the unexpected to great effect. 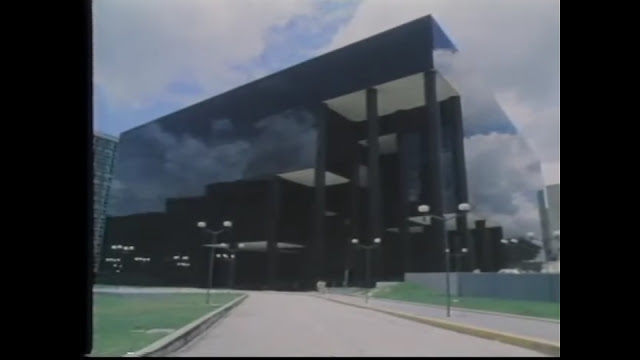 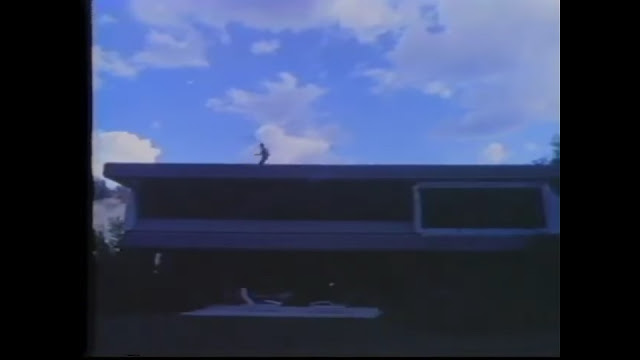 The acting here is all pretty decent, though some performances are a bit goofy at times, especially the two leads at the end, when their acting devolves into screaming "ParaDIIIIIIIISE!"-"RAAAAAAAY!". There's also some pointless (but very much appreciated) nudity. Hola, Venezuelan beauties!

The choreography during the various fight scenes are decent, though the final fight feels a bit like to guys running around a playground with the way they move. It lacked a certain something.

The music here is quite good at times, with a minimalistic sound to it. Sometimes freaky, sometimes soothing, it's pretty decent, and it's used well about...three quarters of the time, I'd say?

That leads me into the final thing to discuss. The direction. It's pretty neat for the most part, with some very good shots! The lighting and cinematography is great in places, as is the choice of locations. Where it falters for me is when the film tries to be arty, and spends up to a minute pointing the camera at a blankly staring character. All while really thoughtful music plays, over almost-pretentious nothing. 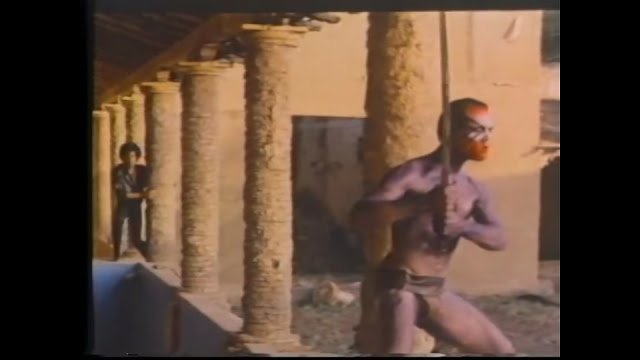 Morituri is a flawed but interesting film, if for what it could've been than for what it is, and while it's not a gem by any means, it definitely needs more love! No IMDb page, barely any reviews online, and very difficult to even find out information on due to the amount of other films called Morituri. If it sounds like it'd appeal to you, I recommend it for curiosity's sake, but it's not a classic...
Posted by Chris Hewson at 3:39 AM