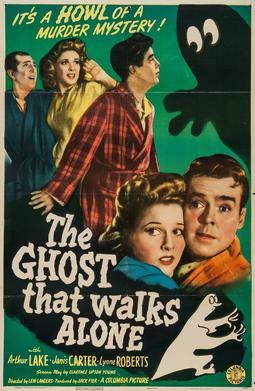 Eddie Grant is a newly married soundman, clumsy at his job but managing to hold onto it by the skin of his teeth. Unfortunately his boss still needs him despite wanting to go on a honeymoon, and the whole cast and crew turn up at the holiday inn the happy couple were relaxing at. They're exasperated but resigned to this intrusion, but things soon take a turn for the disastrous when the show's producer is dead, and Eddie ends up caught in a big rigmarole that results in the police thinking he's the killer... 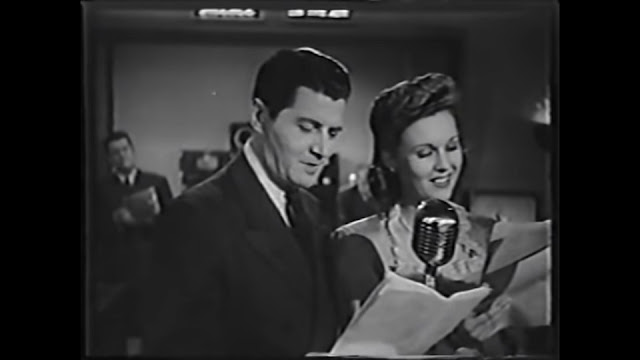 The Ghost That Walks Alone gets off to a fun start, with its radio show trappings. The show we're being treated to might be the worst on/in the western hemisphere/states, but it's amusing/entertaining watching the team fumble their way through to the end. It's a shame it has to come to an end, but thankfully the plot and setting we do get is still neat, and involves all these characters.

The mystery is a pretty basic one. The film is more concerned with the comedy and hijinx that ensue from these [dopes trying to get themselves out of a situation of their own making. Here's a tip for anyone reading. If you discover a dead body, call the police/cops. Don't just take the initiative to dispose of it on the off chance the fuzz think you did it. Otherwise they'll bust in while you're trying to stick it down the drain, going "I swear this isn't what it looks like! I only found the body!". 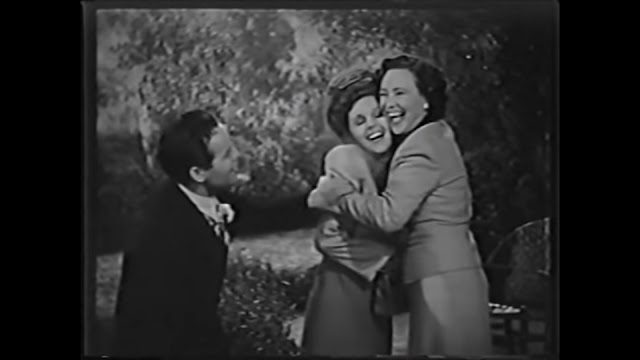 Getting to the negatives, I didn't like how much of this movie was devoted to covering the mystery up rather than investigating it.

My biggest complaint was the identity of the killer. There aren't many suspects to begin with, nor do we get much in the way of clues or =, and the only reason the = wanted = dead is just because he generally didn't like him, same as everyone else. The biggest = though is that we find out ! It's not that the movie straight  up tells us early, but you know how in mysteries, you'll see a suspicious character [suspiciously] = or eavesdropping, but they're just an obvious red herring, and the real killer is the one who you never expected! Not so here, I'm afraid.

It is also a bit cringy how Eddie and the guys hide the body, as well as sleeping in the bed the victim was murdered to ferret out the killer, but that's also part of the fun, so while some people might dislike those scenes more than others, I wouldn't call it a negative   It gets plain hilarious in the last act, too! Once Sue knows Eddie's not philandering, she  plays along with the =, and we get a hilarious scene where she exaggerates her previous fears to trick some police officers seeking to arrest him.
The characters here are an amusing bunch. Eddie is a likeable lead, and you really feel his mounting frustration as the movie goes on, and things get worse and worse for the poor guy. I like is how much credit is given to him by others, who don't just assume he's a dope and don't believe him, but take him at his word and =! How refreshing!...Of course they immediately get him embroiled in a murder =, but no-one's perfect. 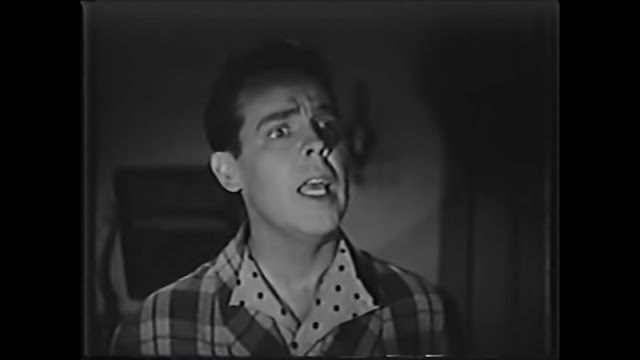 Sue is a sweet and understanding wife (with any moments of frustration on her part being [understandable] and short lived), and it's sweet that this doofy sound man has managed to land himself such a hot spouse!

The rest of the cast range from nice (Eddie's businesswoman sister), spooky (the perpetually grumpy servant), crazy but sweet (the old 'Lady Guinevere'), and catty or quick to conclusions (the radio crew). None feel superfluous, and make the most of short roles.

One thing I didn't understand though was the title. There's no ghost anywhere to be seen! Never even mentioned, let alone anything about them being alone or partial to walks. And the ending confused me too. 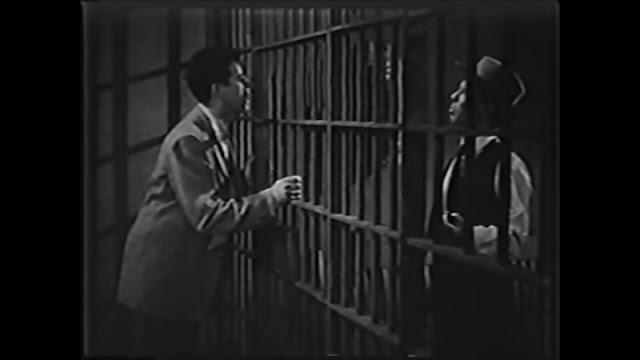 The acting here is all good. Arthur Lake is a fine lead. He gets a little annoying in some spots, like near the end, but for the most part he's fine. He can really run, too! Lynne Roberts and Barbara Brown are nice additions to the cast, while Ida Turner is fun as the somewhat batty 'Lady Guinevere' Cornelia, and everyone else do well as either rapacious scoundrels, or =.

The Ghost That Walks Alone isn't perfect, but its flaws don't drag it down much/too badly, and I still had a fun time watching it. It's worth checking out if you like these kinds of movies, and especially if you're a fan of the Blondie series!...
Posted by Chris Hewson at 10:59 PM