Operation Mantis: [The Extermination of the Male] (1985) 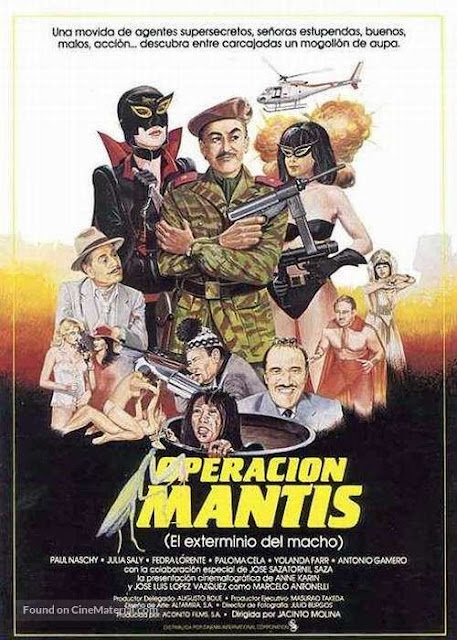 Spanish horror star Paul Naschy had a long and varied filmography, and often crossed into other genres, with perhaps the most notable effort being his pet project Operacion Mantis, a garish espionage spoof with a lot to offer!...

The world doesn't know it yet, but it's in turmoil! A sinister terrorist group led by the = Matriarch have a sinister plan to = and =. A Spanish anti-terrorism organisation becomes aware of the threat and sends their three best agents on the case 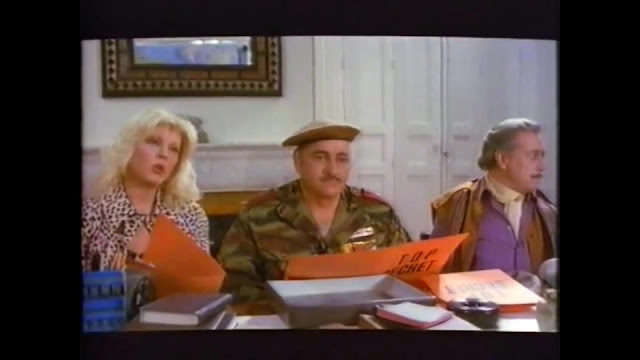 A pretty hard film to find, Operacion Mantis grabbed my attention from the first moment I heard about it. A crazy spy-comedy where Paul Naschy fights men with hook hands while dressing as Rasputin, then as a punk rocker to sing a coded message? Sign me the hell up! Sadly it still doesn't have an official English release, and I've never seen it on youtube. Thankfully I finally managed to find it somewhere the other day, and watched it tonight! It had no subtitles, but I had the next best thing-A Serbian who speaks passable Spanish! Where can you go wrong?

Despite all these =, Operacion Mantis has a bit of a chequered reputation among some people. It was thrashed by critics upon ts release, and very few people saw it. Naschy himself wasn't fond of it, partly because of the sour critical reaction, the loss of money that almost bankrupted his studio, and because his father passed away shortly after, making it a perfect storm of =. I do hope that some years later he was able to appreciate his film for the = it was though, and look past all the negative press spewed at it. Despite some modern reviews disliking the film just as much as its contemporary =, I actually enjoyed myself quite a lot here! 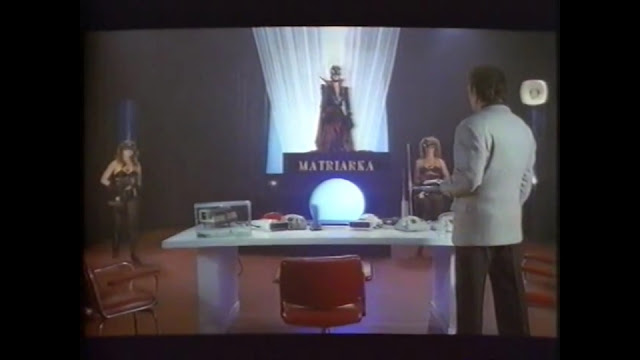 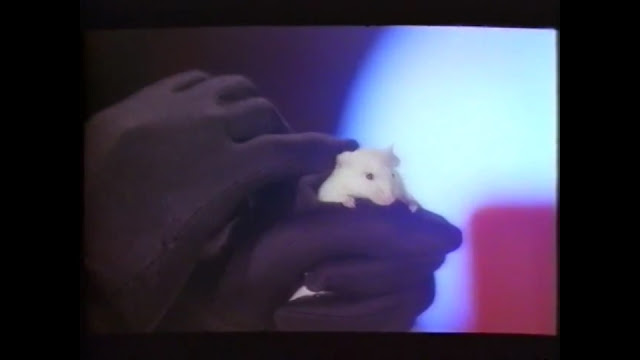 Operacion Mantis is a goofy spoof that knows just how to balance things. It's silly, but tells a goof story with fun setpieces, neat action, and = comedy, never coming across as too farcical, or too serious. It's not the best film out there, but I never found it to be a failure, and it entertained me the whole way through

The plot is your traditional spy fare, with tip-top secret agents sent out to find/locate and neutralise a threat, and have many misadventures along the way. It reminded me of Carry on Spying in a way, another film about a gaggle of = secret agents sent on a mission to stop a = group from killing all men[] 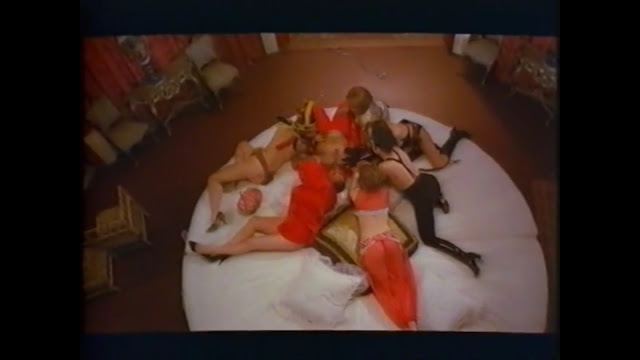 As for how easy it is to watch for foreigners like me with no subs or knowledge of Spanish, it's fine for the most part, especially in the more plot and spectacle = of the latter half, but you'll miss out on a lot of the comedy of the first half, and scenes that'll have you rolling on the floor = would leave no impression without aid.

The comedy in Operacion Mantis can be simple at times, but never = so, and is effective most of the time. I never found it crass or immature, which is a relief. [sex-themed] comedies are at serious risk of being gratuitous and obnoxious, so I'm glad this deftly avoids that fate. The jokes here are = (with the biggest joke to me being that Americans would speak Spanish). 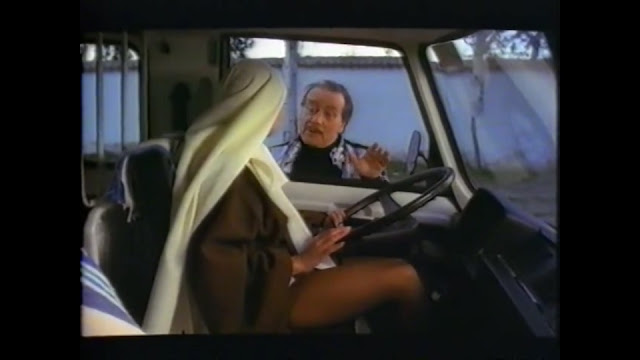 There are many neat setpieces here too, from comedic, to action, and =. My favourite moments were the = final act, the =, and most importantly the punk rock scene in the climax!

themes  feminism  The theme the movie tackles the most seems to be the = of those crazy feminists. You know the ones I mean. The really = who   and seem to care more about = than actually helping out, and =. Boy do they piss real feminists off so much! This movie is clearly taking the mickey out of them, and I appreciate it so much. It frustrates me when hard-working women have to put up with crap from =. Since this is a lighthearted comedy, it doesn't really = super intellectual criticisms, mainly just showing such people for what they are. One aspect I did find interesting though was that the brutish Kong, the aspect of = is willingly working for a bunch of! I suppose that could be interpreted in a few different ways. It could just be an amusing and sweet fact that this otherwise = guy is a = at heart, or it could be showing how = misogynists] go hand in hand with radical =.

I've read some people on the internet say that the film is misogynistic, like some college frat boy complaining about 'those damn feminists ruining all our macho fun!', but it never came across that for me. There was a good mix of =, and it always felt clear that the movie wasn't criticising these women for being feminist, but for being crazy =. There a are no derogatory moments where = and the macho men = 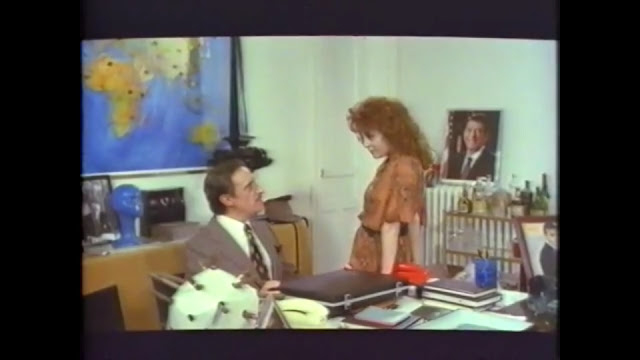 Operation Mantis has a large cast of characters, and it's a testament to the writing's skill that all were distinct, and there was never any confusion. We've got the three heroes, who are a noble trio of spies. Major Sam Stevenson is a =, but not so straightlaced that he's no fun. The things this guy will do for a mission shows that he's =! Marcello is a fun comic relief, and mope than capable sidekick/partner, while Allyson is a good love interest, and an equally = partner.

The supporting cast are a ball of fun too, from the = boss and his chesty and lovelorn secretary, to their = computer. The corpulent Marquesa de Andrede is amusing 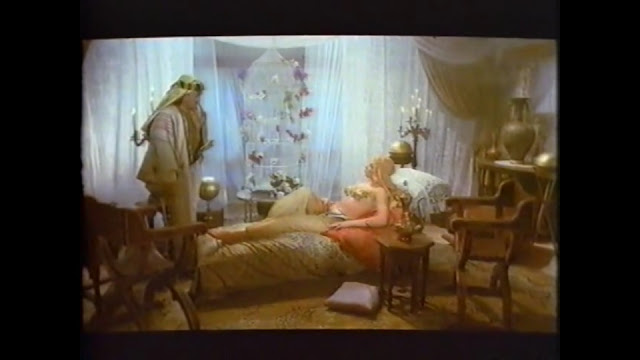 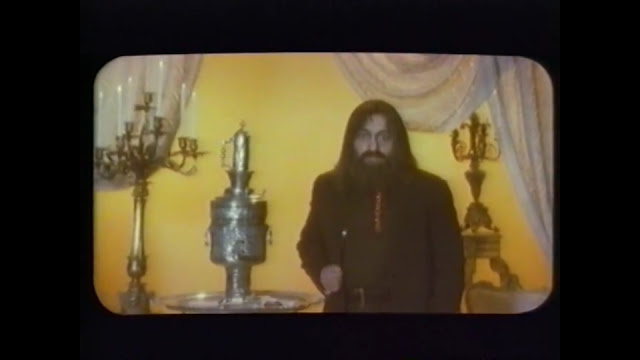 Paul Naschy once again shows himself to be the Spanish master of 1000 faces, as he disguises himself as an Arab sheikh, Egyptian pharaoh, Rasputin, a clown, and a punk rocker, among other things! He does a great job here, showing off his many talents, but being sensible and not letting them overtake the movie and [overshadow] everyone else.

Anne Karin and Jose Luis Lopez Vasquez are fun as Allyson and Marcello, providing some = and = to the film. Julia Saly is a deliciously evil villain, super gorgeous, and exudes a = coldness that fits her character perfectly. Fernando Bilbao is great in his role too, emoting and gesticulating perfectly as the ape-like Kong. 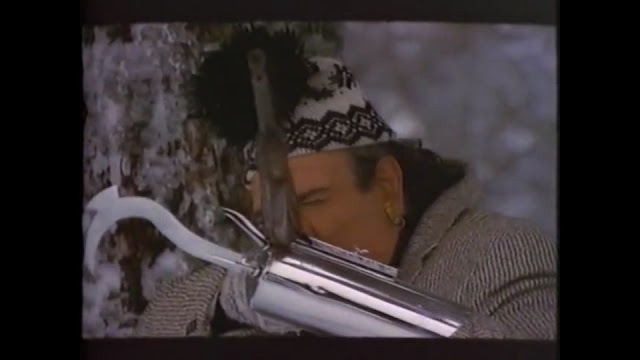 Operation Mantis is a very good looking film   That's not to say it looks perfect, as this is still a = budget film. Some moments are cheaper or a little unconvincing, but nothing that really stood out as bad. The movie's status as a lighthearted comedy really = any lower quality effects, and they don't matter as much as they would have in a serious and = film. It may look cheap at times, but never amateur.

And lastly, the music here is great! There are some neat synth tracks, cool action tunes, and comedy leitmotifs. The main theme is pretty good in a Bond them sort of way, even if the singer's intentional over-the-top delivery can get loud. It's also weird hearing an English song in a Spanish film! Those Europeans are strange. Finally, there's the crowning achievement. The [piece de la resistance]-The punk rock number, sung by Naschy himself! He does a great job, both in singing and presentation, and the song is a fun = that furthers the plot too, feeling like a great joke and a necessary plot point. 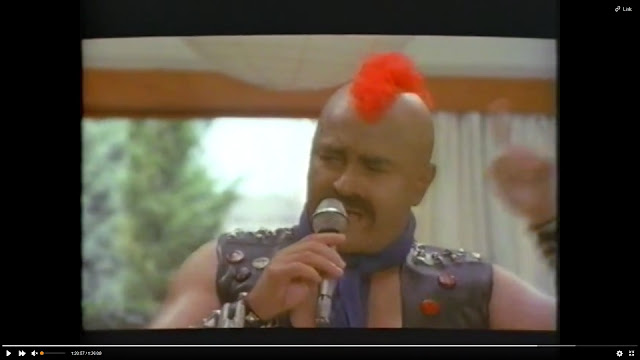 To finish, Operacion Mantis is a very funny and entertaining =! It's not perfect, but I thoroughly enjoyed myself, and if this is considered his worst movie, I can only wonder what on  his best are like!
Posted by Chris Hewson at 10:59 PM