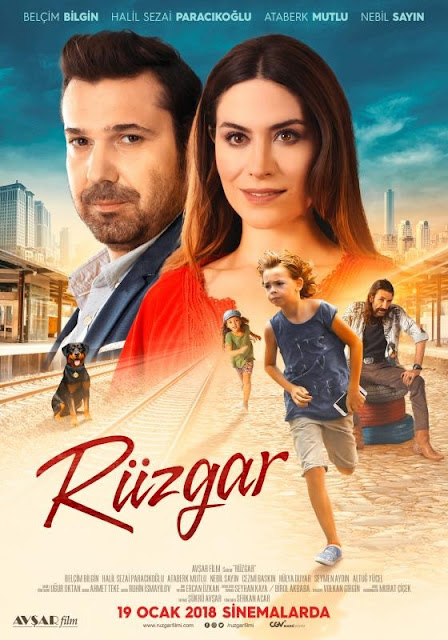 Young thief Rüzgar spends his days picking pockets and stealing anything that isn't nailed down, all for the boss Robin, a gangster who controls a group of orphans to rob people blind. It's never enough though, and the kids in Robin's 'care' are always suffering. One day after breaking into a home and recognising the woman who lives there as an actress from a big commercial, he feels like he's found the perfect mother, and tries nesting. The woman, Ece, is naturally inclined to toss him out the first chance she gets, but once he keeps coming she gets to know him, and discovers where he's fled from. With the help of her longtime boyfriend Alper, the two begin raising Rüzgar, and plotting a scheme to rescue the other kids...

Rüzgar is a relatively new Turkish comedy that starts off strongly, introducing us well right away to the characters, what they're going through, as well as giving us a sign of what they want and =. It handles this very well, not flooding us with information.

The story mixes a few different things. We've got a romance, a career woman wanting to settle down, and being ignored by the company that wants more of her regardless of what she [wants], then you've got the Fagin figure and how this army of kids will escape his 'care'. We get some comedy here, drama there, and none ever overtakes the movie. Some of the later moments could hit one pretty hard, but they never lose sight of the levity, with 'pineapples' stopping the movie form becoming dismally depressing, to =.

The movie's a little over-the-top, though never ridiculously unbelievable, and even when you chuckle a bit at some of the crazier stuff happening, you never doubt that any of these characters would do such things
as well as a positive message for those/couples who are potentially unable to conceive.

The characters here are all great. The titular Rüzgar (or Hound as he's also known) is mischievous and likeable. He's the right balance of naughty and charming, and never comes across as obnoxious. He has a lot of heart too. Ece and Alper are nice adult leads, with plenty of good interactions. They don't look like people you'd expect to be a couple, so it's neat that ]they are].

The group of kids here are a nice bunch. Some might be worried going in that they'd be onbocious, cloying, or otherwise annoying, but they're anything but. They're nice enough, never bothered me, and are helpful too! The main girl Boncuk is adorable (and reminded me of Minik Cadı's Çiçek Dilligil), while the others =, loyal, and the segment where they turn on Ruzgar briefly feels natural, and not like they've all become assholes out of nowhere.

The villains are another high point. They're varied and funny. The best is of course Robin. He looks visually distinct/interesting with his dishevelled bikie look, and we get to see a lot of angles from him, from a stern and bully-ish master, to a panicking and nervous subordinate/flunkie when facing the tougher mobster Osman. The uncouth and overdramatic woman is amusing in her own way, while the aptly named Concrete is more of a = dope, tough but slow on the uptake. Then there's the grumpy mobster Osman, who doesn't take No for an answer, and is fond of [increasingly] gruesome ways of disposing of underlings who don't do their jobs right.

And lastly but not leastly, Ateş the dog! He's adorable, even if he is an absolutely/utterly useless guard dog

The acting in Rüzgar is all very good. The child actors all do their jobs well, especially Ata Berk Mutlu, who's a great lead with a charismatic grin and jovial demeanour. Belçim Bilgin handles the comedy and drama material with equal success, as does Halil Sezai Paracıkoğlu. Nebil Sayın, Hülya Duyar, and Seymen Aydın are great villains, with Cesmi Baskın being a fun supporting baddie.

The coastal Istanbul location is lovely! It's so blue and pretty, feeling like a nice beachside village. It's perfectly complemented by the nice music too, which is always fitting to whichever scene.

Rüzgar is a lovely little film. Funny, emotional, and thrilling, as well as a little unbelievable, all wrapped up in a nice 90 minute package. It just goes to show how Turkish cinema is continuing to stay great to the modern day, regardless of how many lesser films there might be...
Posted by Chris Hewson at 10:36 PM