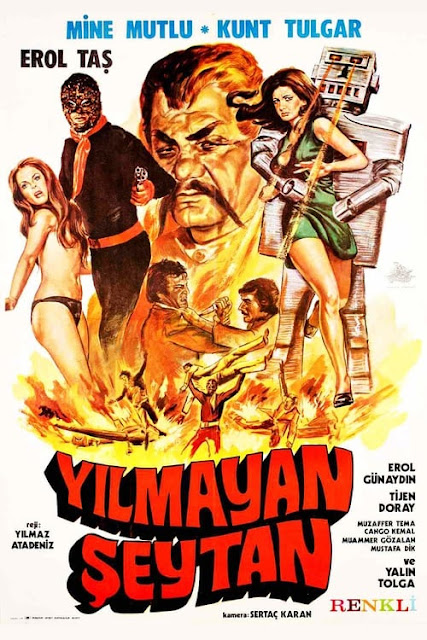 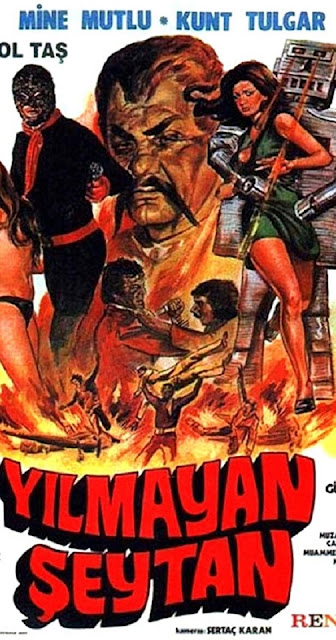 Baytekin is a mild-mannered young man who's suddenly entrusted with a powerful responsibility after his father is murdered. Having been told just before his death that he was the [famed] hero Copperhead, Baytekin must take on the mantle himself, and stop the evil Doctor Satan from stealing a kindly professor's invention and taking over the world... 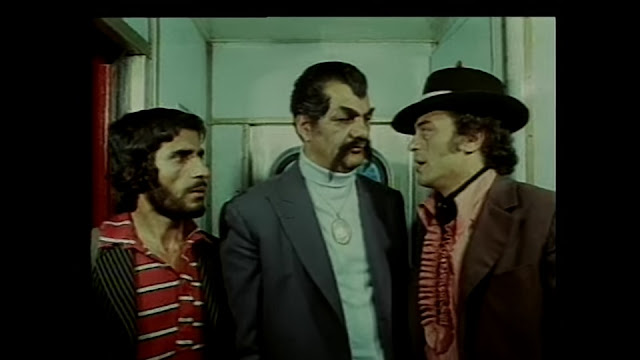 The plot is dime a dozen for this kind of film, but I was impressed by the freshness and depth it brings to it. Even the typical kidnapping of the professor/girl's father has more to it than the common back-and-forth games in the old movies, and the bad girl does more than just stand around near the villain and look pretty, but has an actual presence, leading to a neat twist. 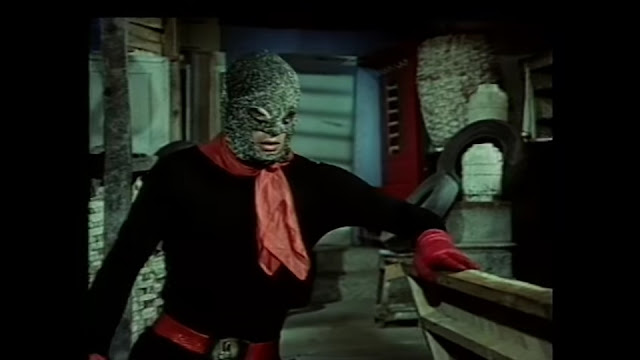 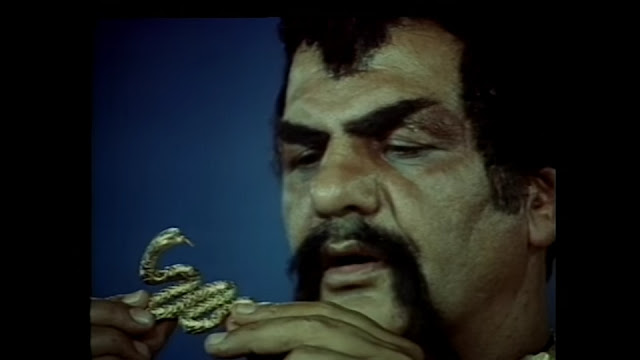 The plot becomes more traditional and less in-depth after the halfway point though, and it does give in to a seemingly endless series of kidnappings. There's still plenty of stuff to enjoy, and it never becomes tedious, but I was getting a little tetchy when Sevgi had been bound and gagged for the 4th time. Even funnier is that it literally only takes 5 seconds for her to be rescued that time!

Yılmayan Şeytan is a [loose] remake of the movie serial The Mysterious Dr. Satan, with touches of Fu Manchu thrown in for good measure. The Turks sure do love them some Fu Manchu! Who doesn't, I tell you? In some ways I suppose the original serial is better, and given it was such an inspiration to them I'm sure the filmmakers would say so too, but this does have its own [upsides]. After all, did a man get a playing card graphically lodged in his forehead in the 1930s serial? I think not/Score 1 to Turkey! 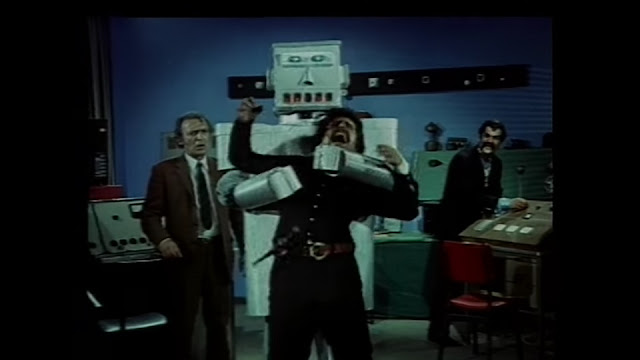 There's never a dull moment here, between all the action, weapons, and deathtraps. It could run the risk of being exhausting to some, but despite the relatively thin plot, this was never quite that bad for me. Some scenes are so crazy too that you'll always be either surprised, or laughing, from bomb-strapped henchmen, to the giant robot that comes out of nowhere!

As with most Yeşilçam pulp flicks, understanding Turkish helps, but isn't required. The dialogue in such movies is often secondary to the action, and anything that knowing the language could tell you is already obvious from the action/content.

There are some things about the film I thought were quite =. For example, I found it an interesting touch that the Doctor keeps all of his henchmen unwillingly controlled by bombs strapped to their chests. Only a few are actually willing servants! This leads to a scene reminiscent of Danger! Death Ray, concerning the defection of a previously thought to be evil goon. Never really goes anywhere after that, but I appreciate it anyway. 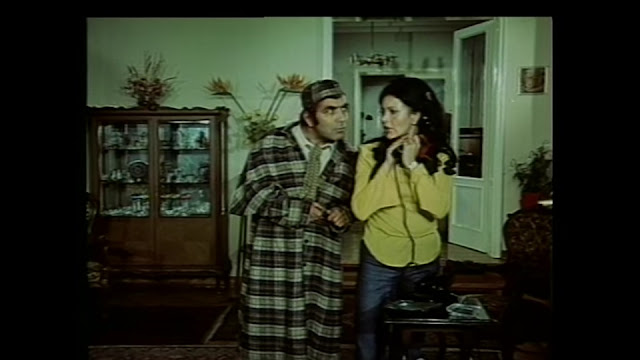 There's some romance here to enjoy too. This includes what I found to be a hilariously unsexy love scene, although at least it knows the value of kissing! The hero is quite a lothario here though, because he's shacking up with the bad girl! What must he have said to his girlfriend? 'It's ok honey, I only banged her to get valuable intel, I didn't actually mean it...Hey, where are you going?'. She's tied up in a rack while all this is happening too! 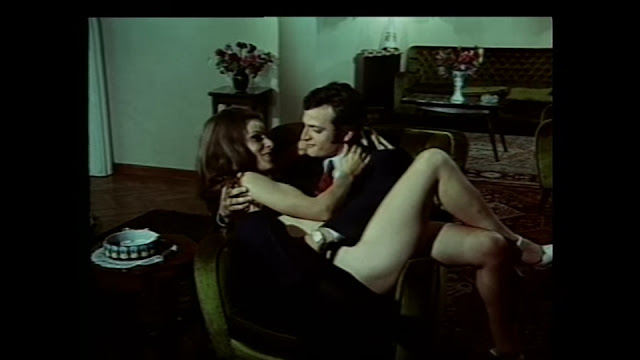 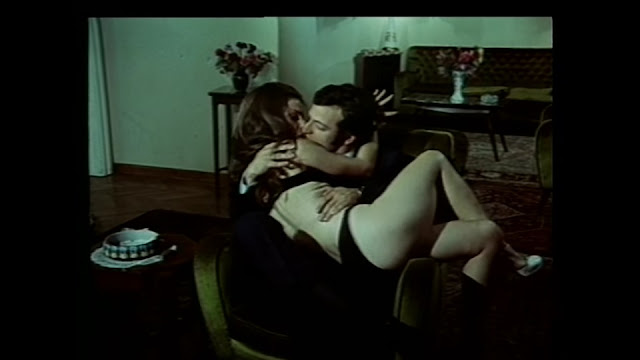 The characters here are basic archetypes, but decently written. =, but never flat. The lead Baytekin is your average Turkish guy. Always up for a fight in the name of truth, justice, and the Turkish way! As the heroic Copperhead (or Bakırbaş in Turkish), he's a fine enough hero. Fights the bad guys off well, doesn't get any innocents killed, and may consistently fail to capture Dr. Satan, but you know he'll get there in the end.

His costume is a bit lacklustre though. I give it credit for being colourful and distinctive, although glitter balaclava and red scarf wasn't the best combo in my opinion. It's very well-made at least! Since this is a Turkish superhero film, the costume is seen as optional, and after the first couple of scenes, it disappears for damn near 50 minutes! Thankfully he wears it more often/consistently in the final third.

Love interest Sevgi is sweet enough, and has nice fashion! A bit strange in places, but creative nonetheless. She gets enough to do, and despite getting kidnapped an inordinate amount, she always feels like she's contributing to the story. The same can pretty much be said for the comic relief Bitik, even down to the kidnapping. For some strange reason he spends most of the movie dressed as Sherlock Holmes! 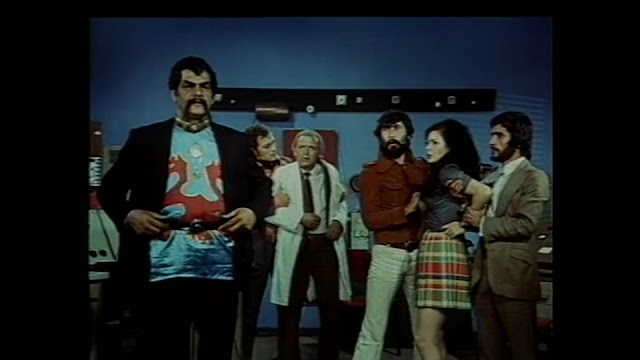 Dr. Satan is a super entertaining villain, always cackling madly, ad unveiling one plan of another. He's a tough guy too, and he never feels like he's a useless pushover. While his palns here and there might be foiled, he himself is only stopped at the end, and you believe that he's a strong opponent. He has great fashion too! Often dressed in neat Oriental togs, he's by far the best looking character in any scene he's in, especially those with Copperhead!

Overall, I like that the film allows you to get to know these characters, so certain developments actually come as surprises, because these aren't just animate blank slates. 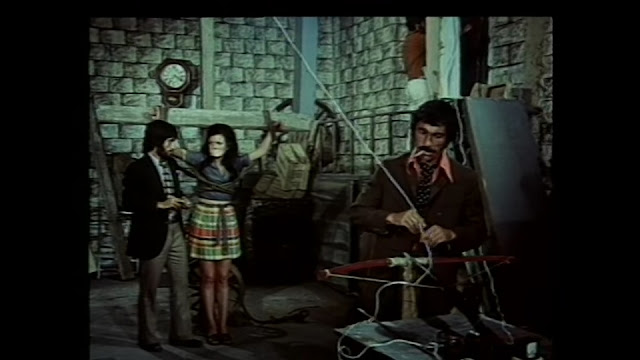 I quite liked the direction here. Shots are well framed, action scenes are dynamic, and every tense moment feels adequately suspenseful. One thing I really appreciated is that a scene directed on a moving train is actually shot on a moving train! In old Hollywood or British productions, it was always rear projection, which just bugs me. Why do that when it'd be so easy to film on a train? Well nuts to that, say the Turkish, and they take my advice!

The fight choreography is well-done, with the fights being played out well, with mostly convincing hits and strikes (mostly convincing), and especially neat was the way the environments are used. There's one scene in particular that feels right out of a Jackie Chan movie. Obviously not in the same league, but not a failure in any way. The worst and funniest moment is when the hero punches a baddie so hard they're both suddenly teleported outside! 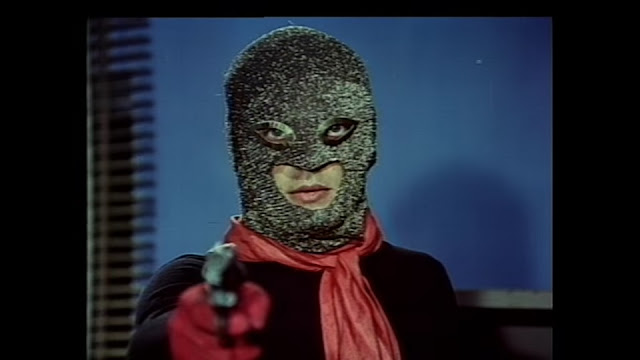 The effects here are pretty good! The evil lairs and elaborate deathtraps (like crushing walls) are well crafted, and the costumes all convince, even if some do look sillier than others. The biggest draw for the effects is definitely the robot! When compared with the giant robot on display in Uçan Daireler Istanbul'da, or Santa Claus Conquers the Martians, this is miles better. It's still cheesy and unconvincing, but more effort went into it than supergluing a few cardboard boxes together.

The score here is great stuff!...Namely because it's lifted music from Dragnet, James Bond, Violent City, and The Pink Panther, and many other places. Since I don't recognise their source, let's just be generous and pretend the production hired an actual composer for them. 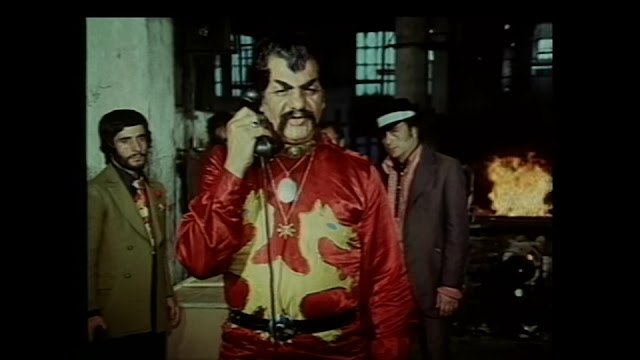 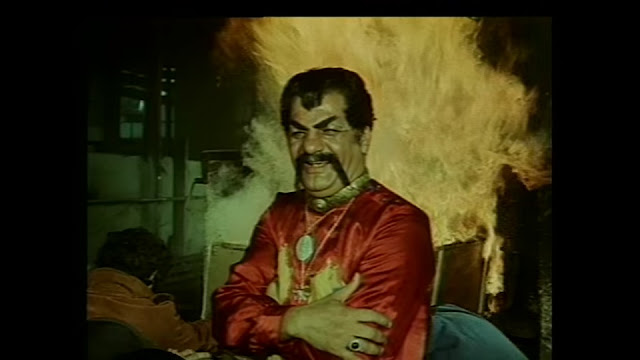 The acting here is pretty decent. The biggest surprise is Kunt Tulgar. Who's he, you ask? Not an actor! Or at least, not known for being one. He was a director, best known for films such as Supermen Donuyor. As far as directors go, he does a pretty good job here, striking a handsome/good-looking figure as the hero. Erol Taş meanwhile is a great villain, both looking and sounding the part perfectly. Erol Günaydin is mixed as the comic relief, but handles comedy well, and is never annoying. Mine Mutlu and Tijen Doray do well as the good and bad girls, respectively, and everyone else do fine. 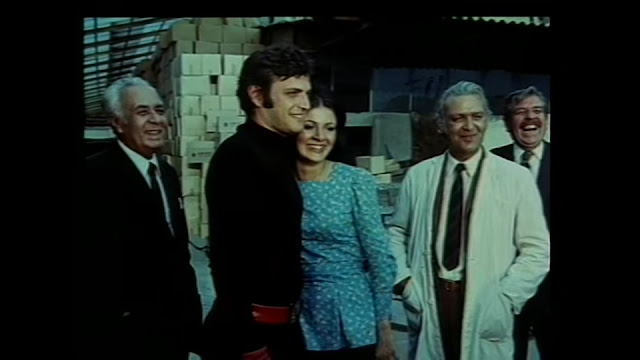 Yılmayan Şeytan is a real gem of Yeşilçam cinema! Don't get me wrong, as a regular movie it's hardly an A-level production, and isn't gonna win any awards, but if you're in the mood for a good time, with a box of popcorn handy, this will deliver, and if you're keen on/a fan of Turkey's z-grade action fluff, this is by far one of the better examples!...
Posted by Chris Hewson at 8:34 AM