Appreciation for Raiders of the Magic Ivory (1988) 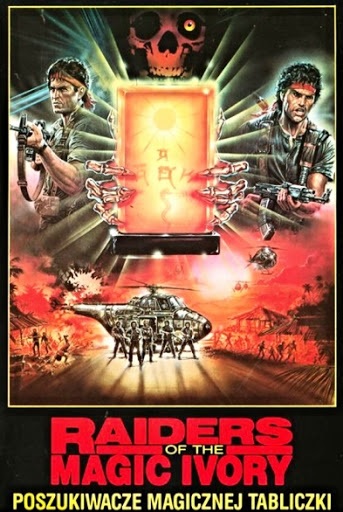 Many years ago, all the way back in 2012...eight years ago, when I was but the tender age of *coughcough*, I reviewed the film Raiders of the Magic Ivory. My original review is hardly missing anything, as I said pretty much everything that needs saying, but this is a film that even to this day still needs more love and attention, and I could easily expand on what I saw. So without further ado... 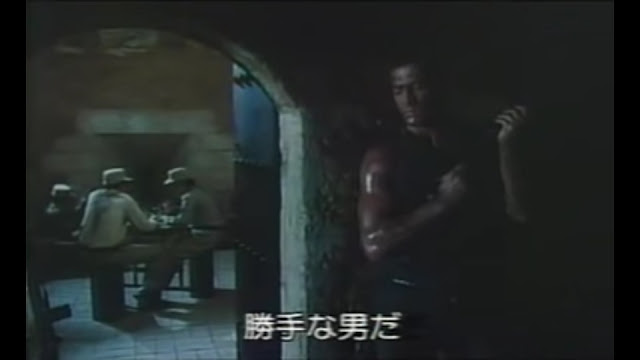 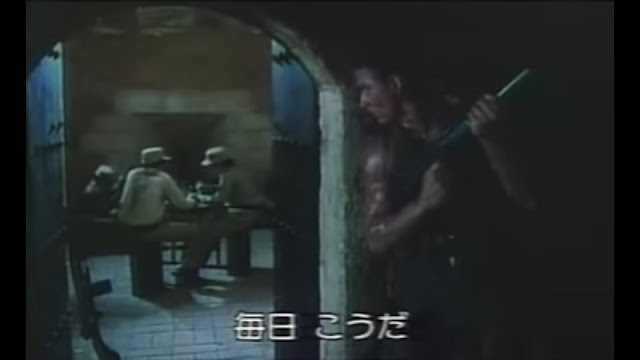 Mercenary buddies Mark and Sugar have just escaped a sticky situation in South America when they're hired by a mysterious Chinese businessman, who has a mission for them-Retrieve a special ivory tablet hidden deep in the Vietnamese jungle, and he will give them $250,000 dollars. The duo don't trust the man as far as they can throw him, but they go along with it anyway, to see where it goes. The mission reveals itself to be an arduous one, as they fight their way through Vietnamese soldiers, and other hazards, before entering 'the hell from which there is no return/no-one returns'. What horrors await Mark and Sugar in this eerie patch of forgotten land, and more importantly, can they shoot their way out of it?... 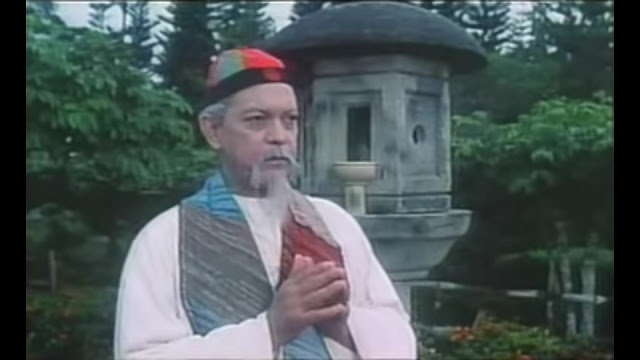 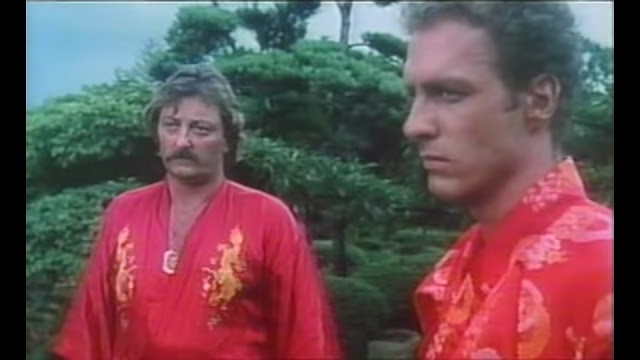 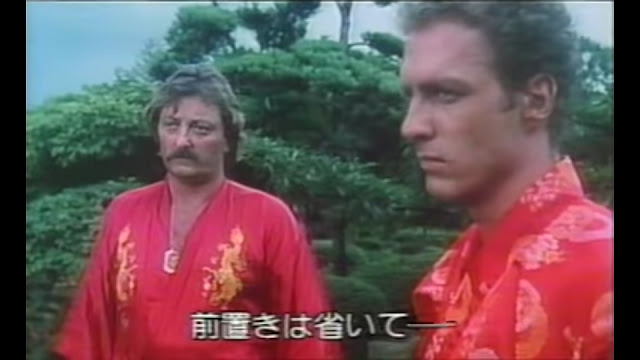 Raiders of the Magic Ivory gets off to a fun start, and it never lets up. The plot is very basic, but is paced well, and you never mind that it's not the most complex of tales. What's important is that you're always entertained and never bored.

Simplicity in terms of plot aside, this is a very inventive film. We've got hostile soldiers, evil cannibal monks, zombies, witchdoctors, and sorcerers! The film manages to nail having three genres in one. We've got action, horror, and comedy, and all mix well, never feeling like a forced hodgepodge. What I admire about this movie is that it knows what it wants to be, and it sets out to do that well. It never tries reaching to high and coming across as less than impressive, but instead does the best job it can in its own wheelhouse, and it works so well!

The movie is cheesy as hell, in all the best ways, like how the leads/heroes never run out of ammunition, despite their repeated assertions to the contrary. "We're almost out of ammo!", one of 'em will say before continuing to mow down hordes of zombies and soldiers for another 20 minutes. Funnily enough, they finally do run out right before the big boss battle, and conveniently so do the villains! How accommodating. 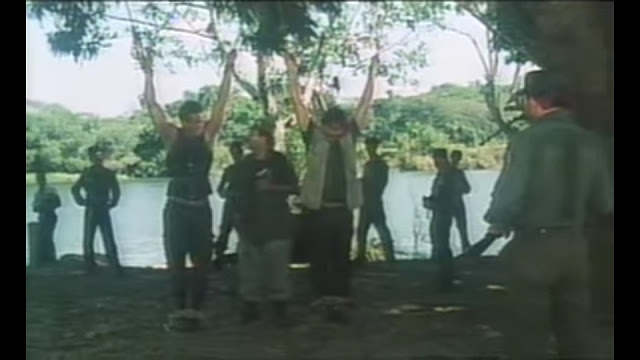 The two leads carry the film very well. They share great chemistry, and you really buy that despite their cracks and snarking, the two are firm friends. Often these kinds of characters can just come across as annoying, making you wonder why these people even hang out if they hate each-other so much, but these two always feel genuine.

They also have a great attitude, taking everything in stride. Namely, they don't believe in magic. At all. This could come across as annoying, having to deal with hardened skeptics even in the face of obvious magic, but what sells it here is their lackadaisical attitude. They may not believe it, but this never stops them from seeing things through, and even helps them out of some fixes/jams, like when their path is blocked by a group of demonic faces and a wall/barrier of flame, and Sugar just says "It's just some kind of bullshit, man, let's go", and they casually walk through it like it's nothing! 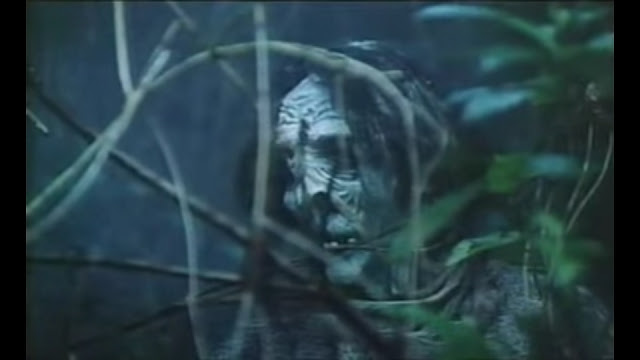 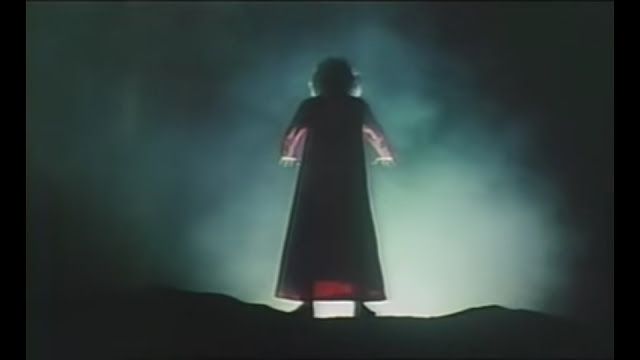 The villains are a neat bunch, though underutilised. The monks and all their superiors and subordinates are interesting and creepy, though pretty empty. They have zero dialogue and no real character to them. I wouldn't expect the sun and the moon from them of course, but at least a little would have been nice.

Then there's Chang and Tau. Apologies for spoiling the twist so clear even the protagonists notice it. Still, the thrill is in the journey, not the destination, which is why the guys even go along with the plan/mission. Chang doesn't appear as much as I would've liked, really only bookending the film, but I understand the need for preserving the reveal   Tau meanwhile is on the duo's side for much of the film, providing good help and useful info, but there's always something off about him. You're never sure if you can trust him, or what he'll do next. 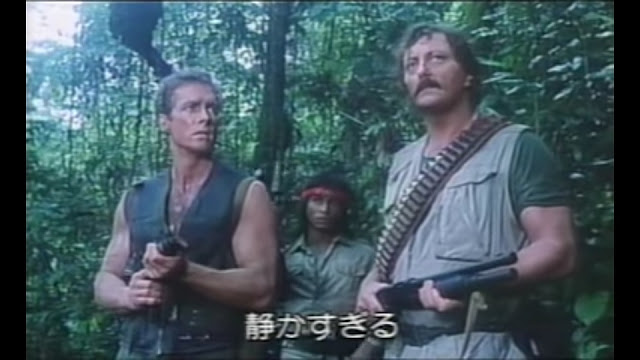 Lastly, there's the character of My Lai. Eight years ago, I didn't like her, and that was all down to the actress. She's just so un-emotive and calm. It really bugged me. Do I feel any differently now? Yeah, a bit. I don't mind her as much, and I even appreciate her calmness in a way. She's not shrieking or crying for help, or being really cliched, but is instead the coolest cucumber/customer in the entire movie, never fazed/unfazed by everything, even her own imminent sacrifice. Maybe the actress just wasn't as talented as the others, or maybe it was intentional on the part of the film. As for her character, she's pretty good. The right sense of powerful and knowledgeable/wise, but lacking in the = strength needed to see the task done.

The ending to Raiders of the Magic Ivory is really something special, namely in that is even has one! So many z-grade action films of the era would just stop after the hero killed the bad guy, but not only does this keep going, but we get a proper denouement! 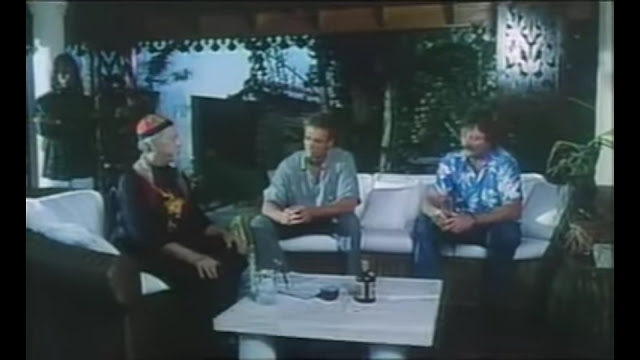 The content of the ending is also just so much fun to me. These two funloving American mercenaries have become the new keepers of the celestial peace. Absolutely the last people you'd expect for the position, but you can't deny the earned it! It's endearing in a way that such = guys managed to nab such a prestigious magical position. They weathered all the challenges they faced in the film well, and came out on the other side and stopped the evil magic of the tablet. One can imagine the looks they'd get if there was ever a convention for Asian mystics! And one can also imagine the adventures Mark and Sugar would get into now. I don't know what, but I'm sure they'd be fun!

The dialogue here is a ton of fun, with the leads often sharing snappy banter.
"Were you just born an asshole or do you work at it?"
Tau: "That is the beginning of The Hell from Which No-one Returns"-Mark: "I've always dreamed of taking a vacation in a place like that."-Sugar: "If you're trying for irony I just don't get it."-Mark: "Hell, I'm the one who's the college graduate here."-Sugar-"Yeah, that says it all."
And the line that perfectly sums up both the movie and the characters is: "Do you believe this kind of crap?" "No, but it is kinda fun!" 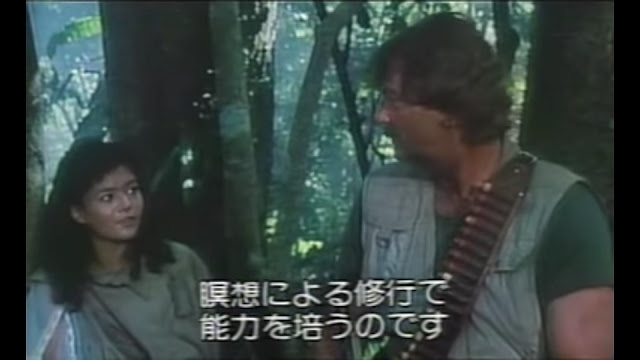 The acting here isn't the greatest in the world, but it all works. A few cheesy performances, and Clarissa Mendez as My Lai isn't the most emotive in the wold, but she's not bad. Robert Mitchum and Chris Ahrens are great leads, and Roberto Dominguez is convincing as the villain, deserving more time.

The locations in Raiders of the Magic Ivory are great. Chang's garden home is very serene, with its rolling pools, lush trees, and green grass. The jungle where the majority of the film takes place is great too. It's got a great sense of pure untouched nature, feeling both pleasant and =, and forbidding, like you're trespassing where you shouldn't [be]. The cave system is just plain creepy too, looking like exactly the [kind of] place an evil sect would hang around in.

The music is very effective here. The action tunes are fun, the softer pieces help = the character moments, and the spooky tracks really build/create an aura of eeriness. I appreciate a score like this for treating the tone with respect. Just because the movie makes you laugh doesn't mean the composer got lazy and just scored everything like a Buster Keaton flick. The only downsides for me were the lacklustre introduction sequence, and the reuse of a certain track during the final battle. It's a great track, but it's a slower more melodic piece. Great for a spooky scene of wonder and mystery, not so good for a =. You'd expect a more actiony tune. 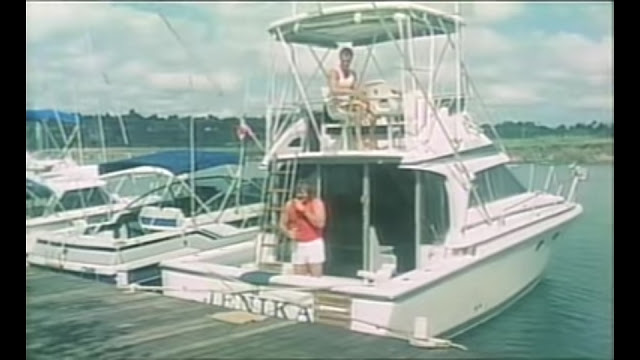 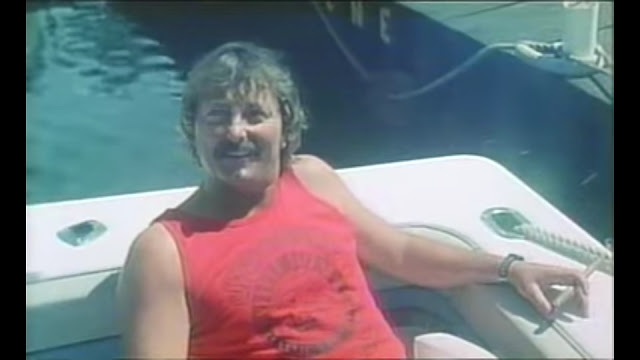 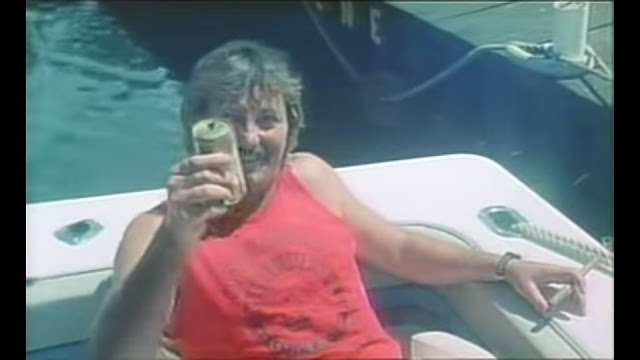 Overall, Raiders of the Magic Ivory holds up as a film, all these years later. It's criminally underrated, and surely needs more love! I can't be the only one who adores this movie, right? Even if I am, I can only hope I spread the word to as many people as possible, and gain this at least one new fan...
Posted by Chris Hewson at 1:52 AM