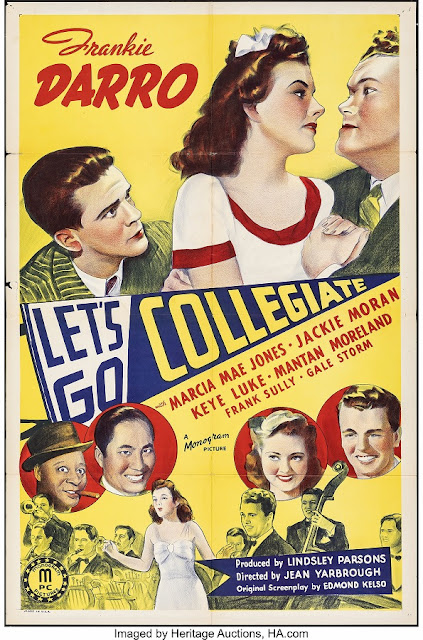 Frankie, Tad, and Buck are three college students trying to juggle exams, girlfriends, and their rowing career all in one. Things get complicated when star rower Bob Terry gets drafted an is unable to compete in the = race. Thinking quickly, they find lower class worker Herc on the streets and offer him the job of impersonating Terry for the night. Unfortunately the loudmouthed boor Herc enjoys his new life too much, and won't give it up, no matter how much this = the others... 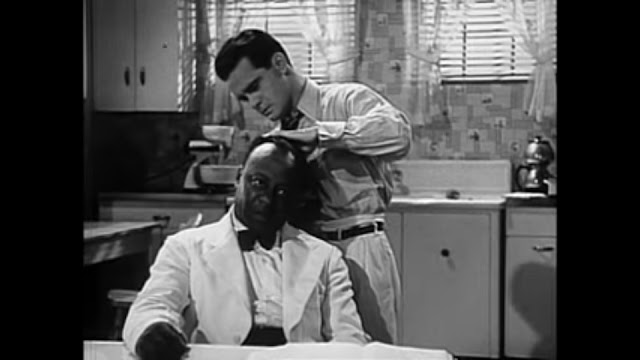 The final outing between Frankie Darro and Mantan Moreland, Let's Go Collegiate really brings the whole gang together (figuratively and literally!). It's not so much a duo film in the same way the others were, but the = still interact plenty, so it's not like Mantan's been relegated to a supporting role in his own = series.

The story here is a good one. It's a strong premise, and one that utilises all of its characters well. You really feel the frustration of the heroes as they get stuck deeper and deeper in this bad situation, but thankfully the gilm's mostly not uncomfortable to watch. The climax is also a relief, as new characters enter the mix who realise what's going on, and we finally see someone on their side! 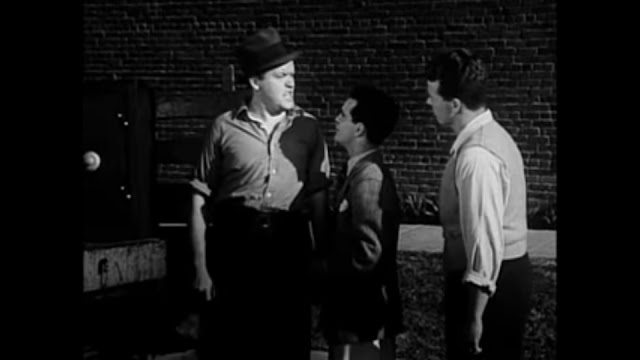 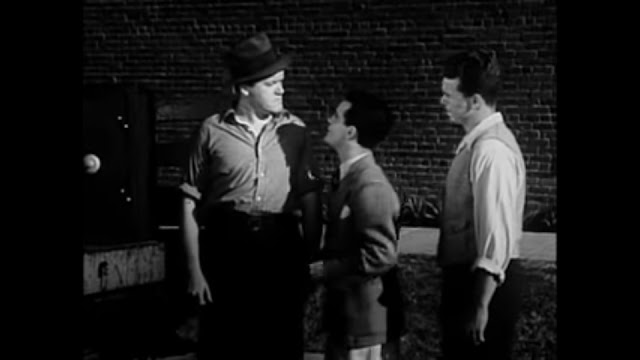 The plot has got a few problems though. The first is the girlfriends. They are bitches! I get what the movie was going for, having them be so entranced by 'Bob Terry' they lose sight of their own boyfriends, but the writer goes one step further and actually has the girls dump them for their new man (not realising the other is engaged). It's pretty uncomfortable watching the guys/boys get so unfairly treated, and the girls acting so callous. I also question how far blind adoration would go when the person is as unappealing as Herc! The worst part of = is how the couple all reunite by the end like nothing's happened. I can only imagine the conversations "Hey honey, remember when I got hot for another guy and dumped you, but took you back when he ran off? Good times, good times..."

The other issue with Let's Go Collegiate is Herc himself. He's a big lug, but he's not that bad of a guy! He does a few bad things, and his mere presence at the college is enough to cause big problems for the guys, but he never directly =, and considers them his pals right to the very end. He may not treat 'em properly/right, but he does appreciate them. And the worst thing he does is completely offscreen = that =. I feel the movie could've made him grow more antagonistic as it went on, and give us a firmer reason to dislike him and wanna see him =.


One of the most notable things about Let's Go Collegiate is how diverse it is for a 1940s production! We've not only got the black Mantan, but the Asian-American Keye Luke! A very welcome sight to see


The leads do make one crack about laundrymen early on, though thankfully I don't think it was an intentionally I think we were meant to =. This is emphasised in a later scene, where a visiting sportsman casually goes "What Tong do you belong to?  and Buck just gives them a withering glance and walks off without a word. There's also another scene where Herc calls Jeff 'Midnight' and he firmly and = says/retorts "The name's Jeff!" That was really satisfying! Jeff was never as = as a doormat in these films, but there were times when he wasn't treated as equally as the others, so to see him was a real treat!

There are a lot of characters in this movie, but thankfully they're all balanced well. It's Frankie and Tad who get the lion's share of =, with Buck and Jeff trailing right behind.

Frankie is a grumpy little man in this movie, though he at least has a reason to be in the second half. He and Tad aren't that different, but the actors ensure they don't blend together.

Jeff  f  plays an integral role in the climax!   I'd say he plays about a 25% role in the =, which might not sound like much, until you realise there's also Frankie, Tad, and Chuck, not to mention the others

There's some nice music here, with three songs. Two are sung by Gale Storm, and they're alright. The second is a mix of all the movie's main players, and is the most fun. The main couples are nice enough singers (although that doesn't sound like Marcia's voice! Could be wrong =), but the real standout is when Mantan and Marguerite get to share the stage! They have a nice little speak-singing moment, with some fun humour too. They help liven the number, and =.

The acting in Let's Go Collegiate is great. Frankie Darro and Jackie Moran are fun enough leads, and they might be a bit = at times, but they're at least understandable and sympathetic. Mantan Moreland is in top form, always quick with a funny line or witticism, and gets to share the screen with the lovely Marguerite Whitten again! Keye Luke =. Frank Sully is amusing as the 'baddie' Herc, while Marcia Mae Moran and Gale Storm really feel like bad guys. I thought their performances were fine, but didn't really enjoy them due to the actions of the characters. There are more to discuss, but you can watch the film to see them! 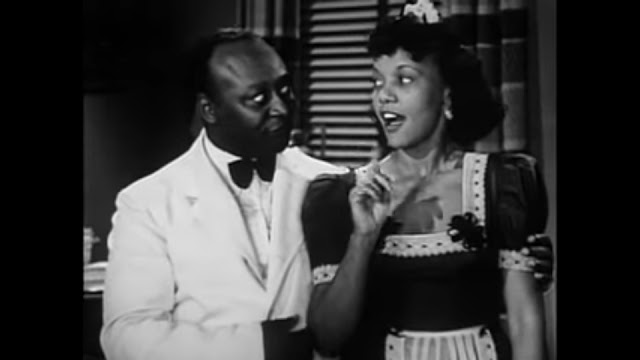 It's a shame that Let's Go Collegiate is the last of the Frankie and Mantan outings, but at least they ended them on a high note. This is a pretty funny movie, and well worth watching for fans of golden age comedies, as well as college goers. Why not see what your forebears got up to in their college years! =...
Posted by Chris Hewson at 10:59 PM