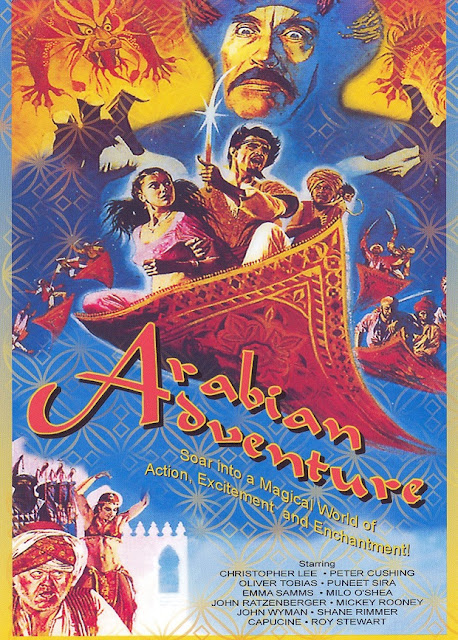 Arabian adventures were commonplace back in the 50s and 60s, with highlights such as The Thief of Baghdad (any version), and the various adventures of Sinbad. Not only were these fun movies, they were also great spectacles, with high budgets, state of the art effects, and unforgettable monsters. By the late 70s the genre had all but gone away, but there were still some holdouts, namely 1979s aptly titled Arabian Adventure... 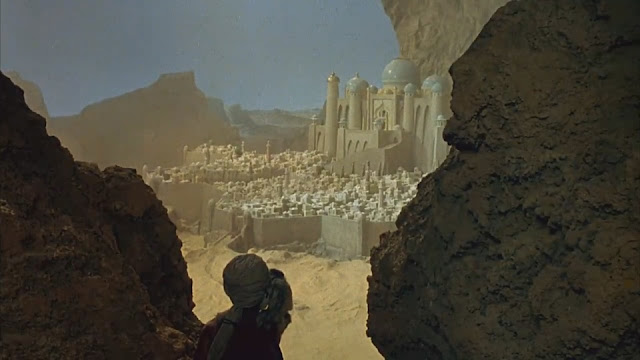 The land of Jadur has been living under the shadow of the wicked caliph Alcuazar, who sees all with his dark magic. One fateful day sees the arrival of Prince Hassan of Baghdad, come to ask for the hand of Jadur's beautiful princess Zuleira. After a rocky introduction, he is offered a quest-Journey to a distant island and find the mystical Rose of Ellil, and bring it back as a sign of his devotion. Hassan sets out on his quest, with some allies, but little does he know what sinister purposes Alcuazar really has for the rose... 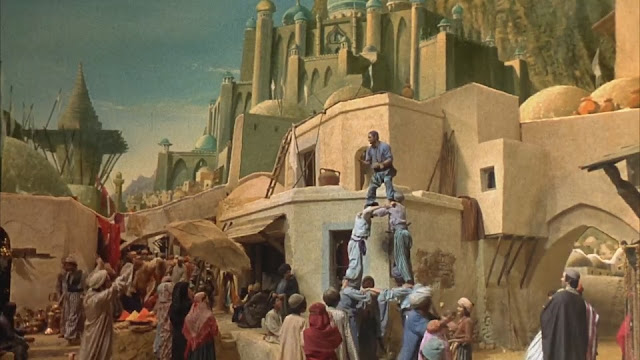 Arabian Adventure is a great time! It perfectly captures the feel of those classic Arab adventures, and you really couldn't ask for a better sendoff than this.
The plot is fairly traditional stuff. Noble prince, evil ruler, a mystical quest, and a beautiful princess. But the way the story is told gives it a freshness. Even though you can probably guess every plot beat a mile away, you really enjoy the journey anyway. 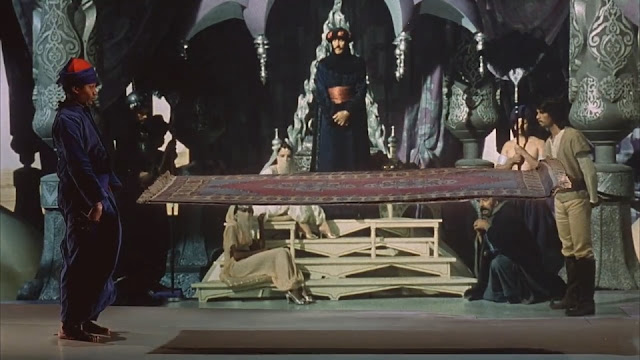 The movie introduces its world very well. Jadur is a bustling place, beautiful yet messy, and there's an oppressive air the whole time, which we see demonstrated when Alcuazar quashes a small rebellion. The quest Hassan is sent on is basic, but effective. I also appreciate that it isn't pointless. Considering that the only reason Hassan is looking for the rose is because this asshole told him too, that might make the viewer worried he's just wasting time, but not so, as the rose ends up an invaluable tool against Alcuazar. 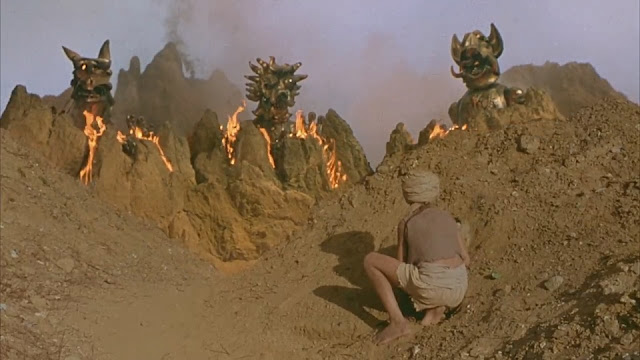 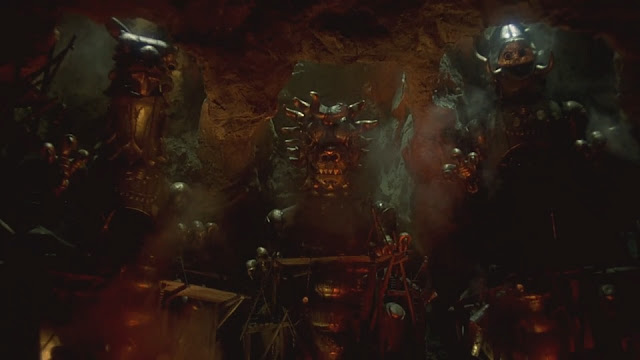 Hassan is a decent enough hero. He's probably the most 'boring' archetype in the film, being he's just the perfect virtuous hero, but he is always good to follow, and most important of all, he's likeable and never dull.
Alcuazar on the other hand is a diabolical villain! He does have depth though, and isn't just a one-dimensional villain. We can see he feels genuine affection for his step-daughter, and she loves him too.
I seriously question his intelligence for having his secret lair's password be his own name! Zuleira finds out by complete accident simply by using his name in conversation with herself! 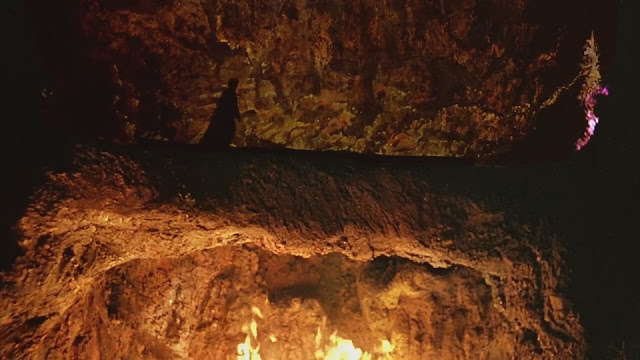 Young boy Majeed is the film's other protagonist, in some ways moreso than Hassan. Child protagonists in adventures like this can go either way. They can be annoying an unnecessary, only here to cater to the young crowd in the audience, or deliver bad comic relief. Thankfully Majeed's role here is a good one, and a nice example for what to do right. He's entertaining instead of obnoxious, never a little shit, and his own little adventures tie in well to the bigger story, as does his connection with a benevolent sorceress.
The princess Zuleira is a nice girl. Spunky, cute, and loving. Her relationship with her step-father is effective for both characters, and while it's silly that she falls in love with Hassan so quickly, it's handled believably. Him going on a quest means they spend much of the film apart. Thankfully this separation doesn't mean she's gone from the film. She still has a proactive role throughout, and in fact helps out so much it endangers her own safety, when all she could've done was sit in her bedchamber and chill out for a few days. On that note, it is funny how Alcuazar always leaves his magic monitor on, meaning that he misses everything Hassan does during the last act, and is helpless to stop it, while good ol' Zuleira witnesses everything. 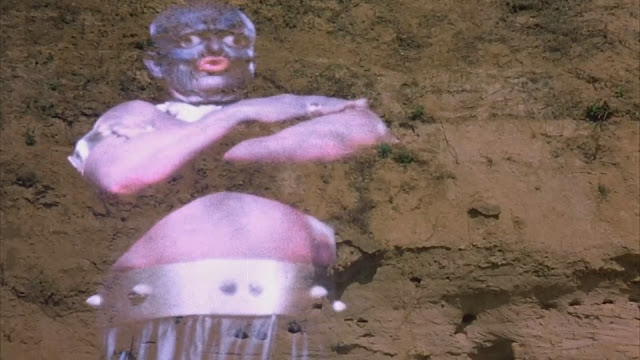 Alcuazar's advisor Khasim seems to be an ally for Hassan at first, but we know where his allegiances really lie. He's generally comic relief, so one might think he'll turn good. Though one can see his true colours upon seeing how he destroys the genie. I know he was an asshole, and he definitely deserved to be blown up, but it's awfully rude to kill someone after promising to spare their life! Khasim gets a great comeuppance at the end. Not only is he thoroughly mortified, and is sent home knowing the whole time that he is well and truly buggered. I was surprised that he's suddenly ok at the end, and we never get a proper resolution, but that's ok. We can assume enough.
The effects in Arabian Adventure are breathtaking. There are creatures galore, from mechanical giants, genies, sorceresses, monsters, and other effects like transformations, and the magic carpets. Some are more convincing than others, and you can notice a bit of back projection here and there, but it's never unconvincing, and the climax is extremely ambitious for the time! All in all I applaud this film, as even its lesser moments are brimming with imagination. 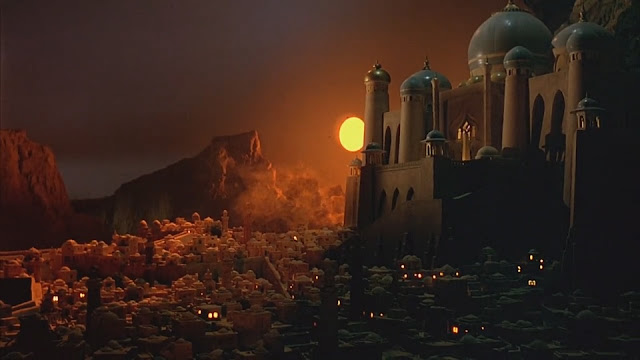 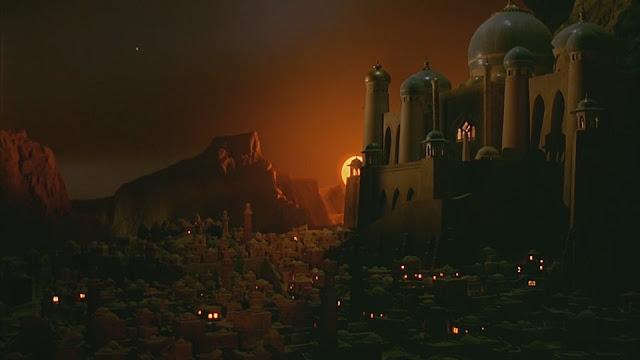 The locations are just as dazzling. This is a film shot almost entirely on a set, but you'd never know it. These areas are all so rich and full of detail and life. It's hard to believe a simple set could be done up so convincingly, but here's the proof. It's like walking in a time machine. There's great use of matte paintings (a real lost art in cinema!), and more photography tricks.
The acting is another highlight. Christopher Lee is perfect as the dastardly villain. Sure to send chills down the spine of any kids watching! Oliver Tobias is a fine lead, while Puneet Sira is endearing as young Majeed, and never annoying, and newcomer to acting Emma Samms does well as the Princess. 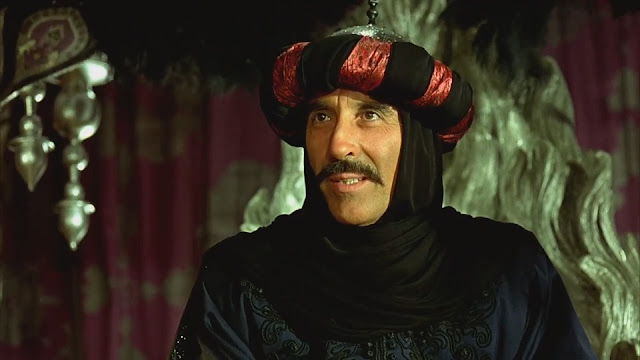 There are many other little performances here and there, and all do well, though some of them  Elisabeth Welch and Capucine both play the sorceress Vahishta, but get very little to do, Capucine spending her whole screentime inside a tiny jewel. Milton Reid and Valentine Dyall get a memorable scene as the genie. Peter Cushing is sadly wasted, only getting two short scenes an hour apart. Mickey Rooney also shows up, as an unexpected surprise. He does well, and isn't as out of place as I expected, though his character does act a little crazy, and we never really get to know him. The fashion in them ovie is overall snazzy too! 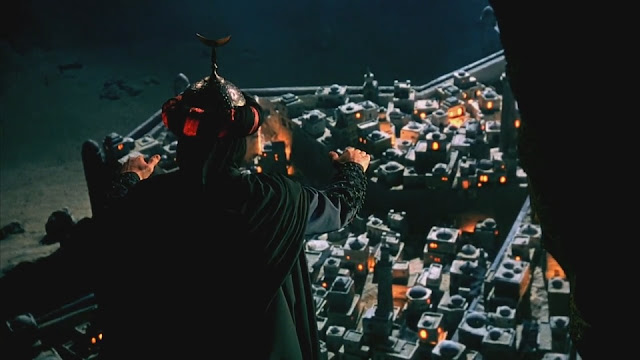 A thrilling ride for adults and kids alike, Arabian Adventure comes highly recommended from me. It's a perfect introduction and encapsulation for its genre...
Posted by Chris at 7:43 AM