Tintin and the Mystery of the Golden Fleece (1961) 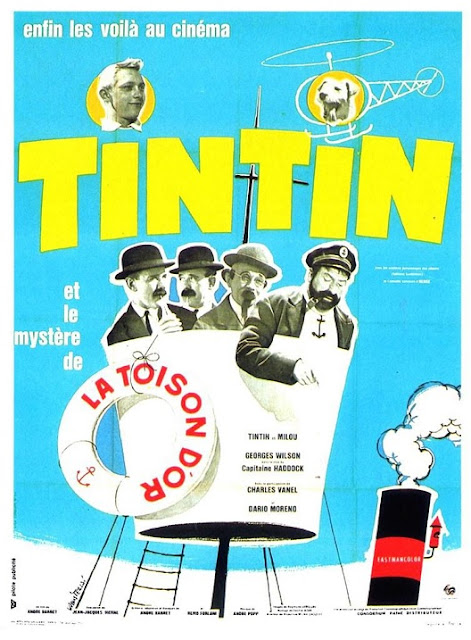 Young roving journalist Tintin is relaxing with his friends Captain Haddock and Professor Calculus, when the Captain receives a letter concerning an old friend. The old sea dog Themistocles Paparanic has passed away, leaving the rickety old boat The Golden Fleece to Haddock, imploring his old friend to see the worth in this jewel of the sea. Far from grateful, Haddock is about to destroy the old thing, when a suspicious offer from businessman Anton Karabine makes Tintin and co. change their minds. Together they sail from Turkey to Greece, in search of the answer to the mystery before less scrupulous hands get there first... 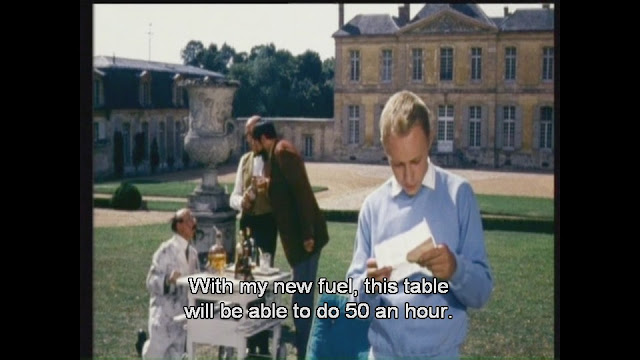 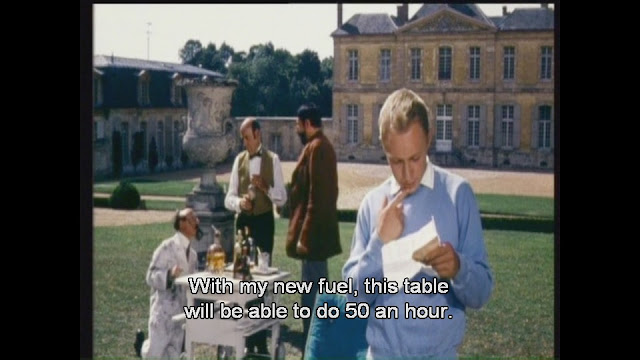 Out of all the famous comic series' that litter France and Belgium, some have gotten their fair share of movie adaptions (with good ol' Asterix being a mainstay), but one that hasn't is the adventures of Tintin. His only big budget Hollywood outing was in 2011, with no follow-up, and there aren't even any films coming out of France! That wasn't true in the past however, as we got a couple in the 60s. Tintin and the Blue Oranges I have already reviewed, and have wanted to see its predecessor for a while now. Having finally seen it, it didn't disappoint! 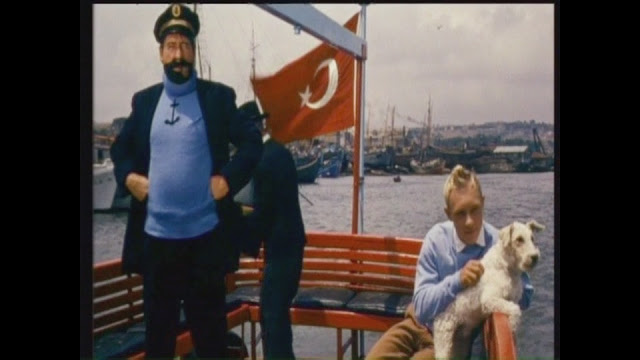 This is a fairly simple movie, but in a good way. The whole thing is such a nice and pleasant European tour that it wasn't until an hour in when I realised, I still had no idea what the overall plot was. Now that I've finished, I'd say this is a minor annoyance, but it doesn't harm the film overall. It's still a nice adventure that never gets dull, and the central mystery is a good enough hook to keep your interest until you get all the details.
There are numerous great moments on display, from either the larger than life characters, or the action sequences they get involved in. The climax is great fun! Everyone gets to contribute. Snowy valiantly lies down on a fuse to stop it going any further, while Haddock and the others have to break out of captivity and get rid of the bomb. 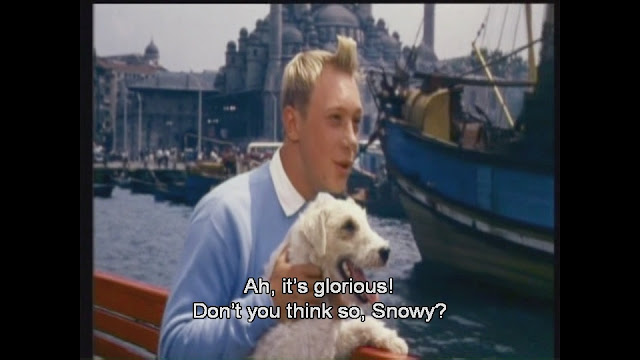 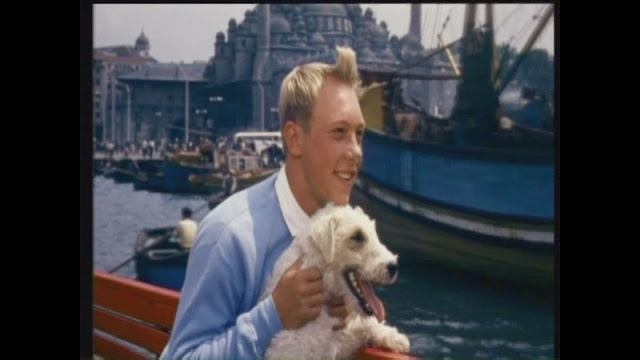 The heroes here are a great bunch. Tintin is a decent idealistic hero, while Captain Haddock is loud and blustering, but goodhearted. Unfortunately Professor Calculus is out of the action for much of the picture, but he returns at just the right moment, and it's like he never left. Thomson and Thompson also appear, and likewise make the most of their limited screentime.
The villains are a weak point though. Karabine is your typical Tintin antagonist, and gets a couple of good moments, but with an hour separating his appearances he never really gets the time to do much. The remainder of the villains are just a random assortment of heavies, who all feel like they should have more to them than what we get. As it is they all blend together. 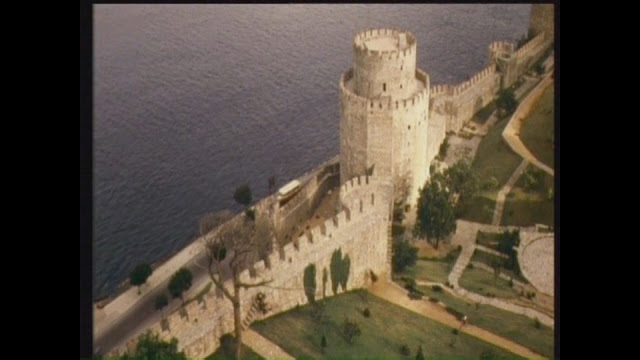 The film is chockablock full of fun dialogue. Tintin makes good remarks like "I don't trust his way of mixing feelings and figures". While Captain Haddock is naturally the life of the party with his loud streams of insults, sure to knock any baddies down more effectively than a punch. 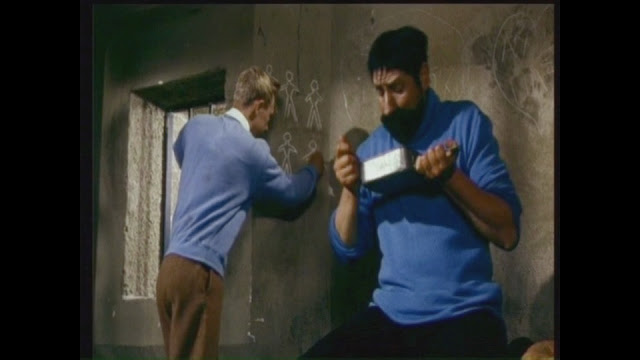 Onto the acting, Jean-Pierre Talbot does a fine job, and he manages to be a good protagonist even if he does threaten to be overtaken by the more distinctive supporting cast. Georges Wilson is perfect as Captain Haddock, like a comic strip come to life. The same goes for Georges Loriot as Professor Calculus, and the perfectly synchronised pair playing the Thom(p)sons. Everyone else does good jobs, with varying degrees of calm and understated, and over the top. And let's not forget the pooch who plays Snowy! What a good boy he is. 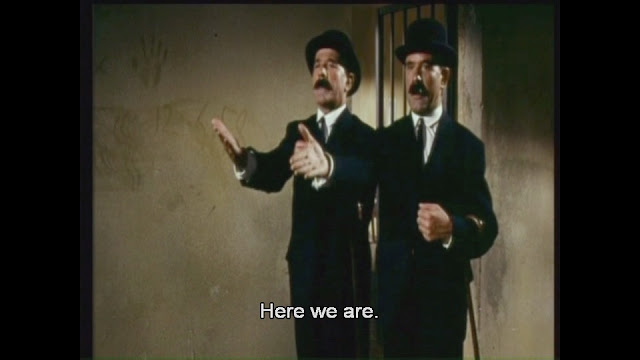 The soundtrack is great. Lots of jaunty music, and authentic Mediterranean pieces.
Golden Fleece is filmed on location in Turkey and Greece, and is always gorgeous to look at. Despite its globetrotting though the whole production has a charmingly low-fi feeling. This probably wasn't the case, but I got a nice homely feeling from it all, like it was all a bunch of mates getting together.
One last thing to discuss is the end credits, which are a delight. There's some hand-drawn Tintin figures, with some added motion and effects, to really liven things up. I also liked the snazzy wording present, as well as the occasionally cheeky credits. 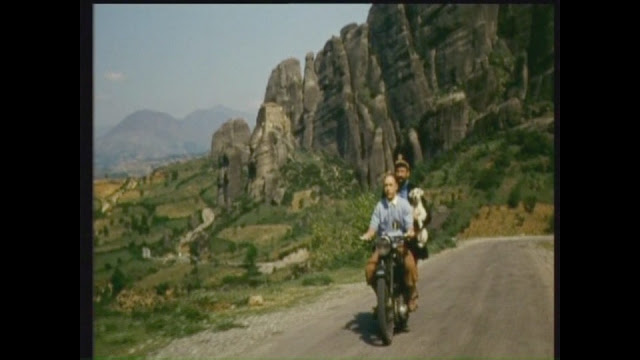 Tintin and the Mystery of the Golden Fleece is a great time to be had! It's not a perfect movie, but it is of the comics it's based on. Definitely worth checking out...
Posted by Chris at 7:47 AM