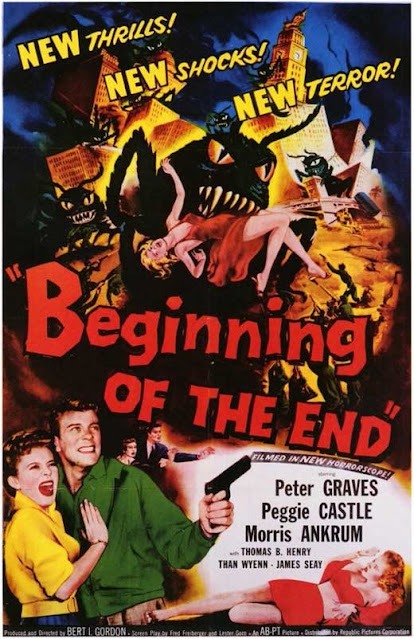 Overnight, the entire town of Ludlow is annihilated by an unknown force, with no traces left of the population. Photojournalist Audrey Aimes investigates en route to another story, and after getting co-operation from the military, she begins her own search, soon finding a local scientist with strange experiments. Dr. Ed Wainwright  has been using radiation to grow giant food in an effort to cure world hunger, but without his knowing, a swarm of locusts has broken in and eaten some produce, resulting in them growing to giant proportions. The insects begin attacking as they move closer to the city, and it seems like nothing can stop them... 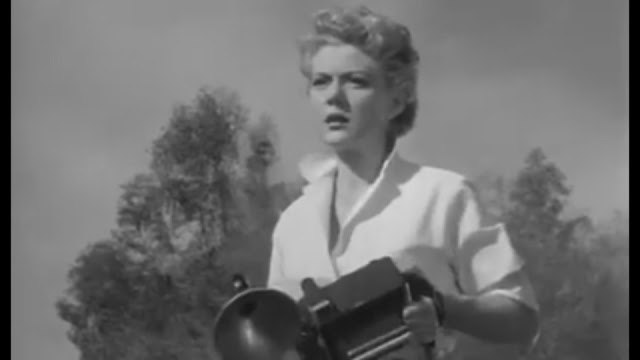 B-movie veteran Bert I. Gordon often created giant monsters for the silver screen, from the Amazing Colossal Man, to spiders, cyclops, and alien dinosaurs (or indeed, lizards with bits of plastic stuck on their heads). With 1957's Beginning of the End however, he attempted something a little more ambitious...So ambitious in fact that out of all of his movies, this is among the cheapest as a result.
This is a by-the-numbers giant creature feature, with little to make it stand out in that regard, but where it succeeds is in its tone and presentation. Sure, it's basically a knock-off of Them, but it does enough of its own thing to feel fairly unique. The ominous tone during the beginning is well handled, and the film does have balls. 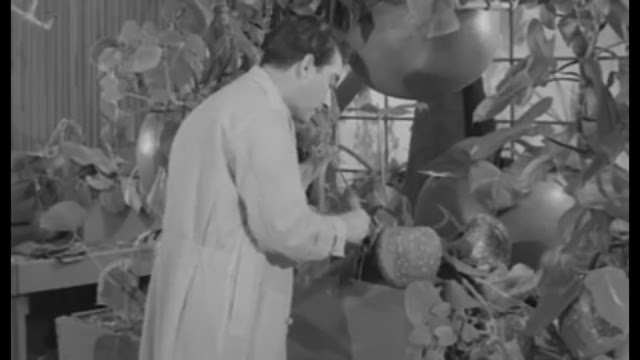 The last act has an atmospheric feel to it, even if it is a further knock-off of Them. The emptied cityscape looks great, and always convincing.
Onto some negatives, Beginning of the End has a few huge gaps in logic. Firstly, it's been two months since these locusts grew giant, and yet they've been unnoticed this whole time, even when eating an entire town. 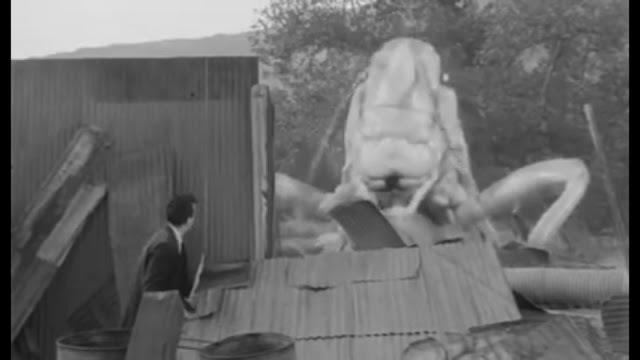 Then there's their strength. They may be giant, but they are only insects! It's hard to believe that guns, rockets, fire, and pesticides do absolutely nothing! Where things totally fall apart is in the last act, when the military need to capture one of the locusts alive, and they do this quite successfully by use of a gas bomb. Sooo...why didn't they use them to begin with? Then later on, Ed is able to use his skill of being the hero to shoot a locust dead, despite them being immune to bullets.
And lastly there are a couple of amusingly goofy moments, like the voyeur grasshopper (he's been watching too much King Kong!), the polygraph scene (I'm not convinced the writer knew what it even is), or when the heroes throw their gas bombs, then immediately remove their gas masks. 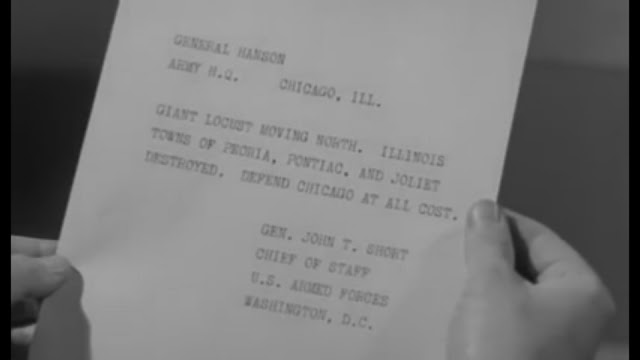 The characters are mixed. Audrey is a great lead, carrying the film's first act very well. She's your typical plucky journalist, but she has some depth to her, courtesy of her past job during the wars.
Ed on the other hand is a dickhead! His radioactive fruit is what made the locusts grow to such deadly size, and yet he suffers from no guilty conscience at all. The most he says is "I feel I may be partially to blame for this". You're COMPLETELY to blame. Even your assistant got eaten! More than that, he uses his former army position to speak with an air of authority around other soldiers, apparently forgetting he was only a radio operator. As far as protagonists go, he's alright, but it is hard to overlook how much of this is his fault. 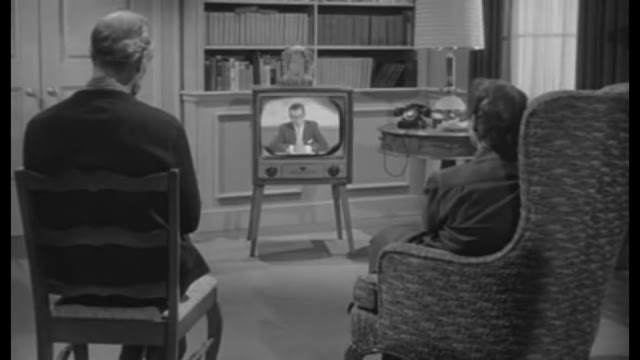 The military are likeable and well portrayed here. They're not just stereotypically bullheaded or nasty, which was a relief to see for a change. 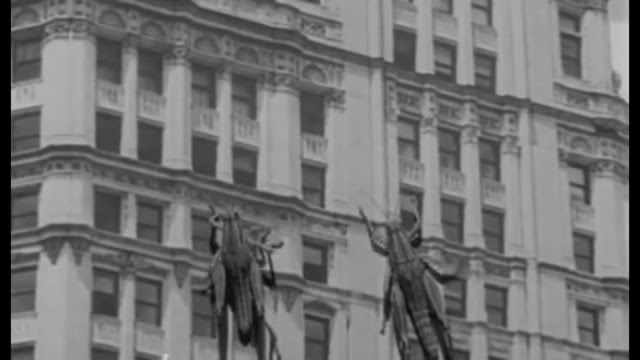 The effects in Beginning of the End are admirable, if not entirely effective. The production was so cheap and quick that costumes or props was not an option, certainly not for dozens. So Gordon, heading the effects himself, bought a bunch of real grasshoppers and superimposed them onto all the action. This looks better in some scenes, and quite fake in others. Overall it works as well as it could have. Though some of the more laughable moments are when they climb buildings, and we can tell they're smooth postcards. 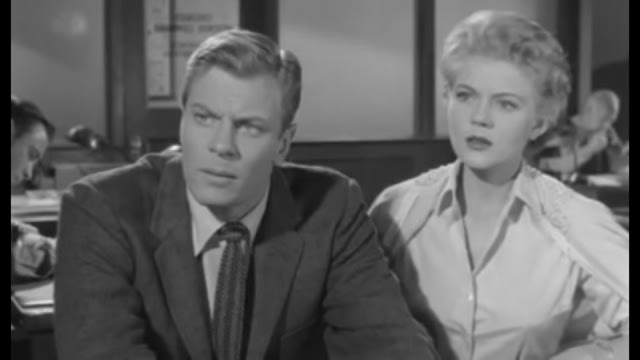 Reliable star and B-movie stalwart Peter Graves delivers a fine performance, while Peggie Castle does a surprisingly good job as the love interest/defacto protagonist, and Morris Ankrum is good as the stern but levelheaded general. No complaints here. Kind of a shame there aren't any cheesier moments of overacting! 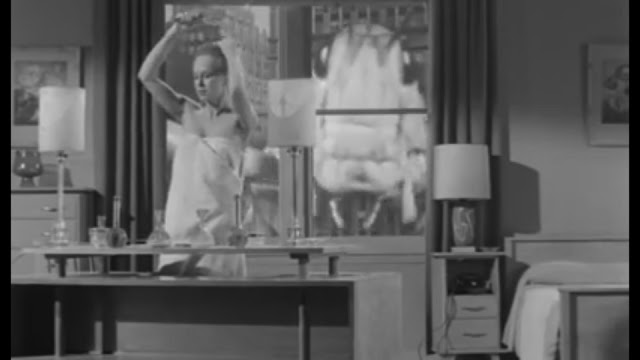 Beginning of the End is a surprisingly good time! It hardly reinvents the wheel, and covers all the same territory you'd expect, but it does it in such a good way that it's hard to dislike. And the effects are good for a laugh too. All in all this is a success for Bert I. Gordon...
Posted by Chris at 2:14 AM