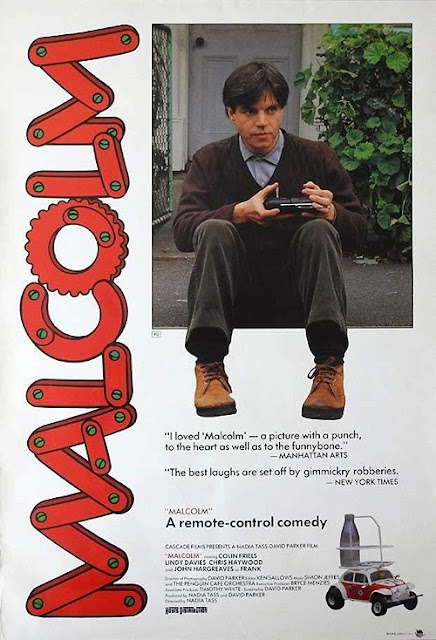 Malcolm is a young man living on his own in the suburbs of Melbourne, working a simple job at a tram until his creative spirit gets him sacked. To make ends meet he has to take in a tenant, and grumpy ex-con Frank answers the call, bringing his more levelheaded girlfriend Judith. The two are surprised by Malcom's shy demeanour, and especially by his inventions, and the three soon get the idea for a heist... 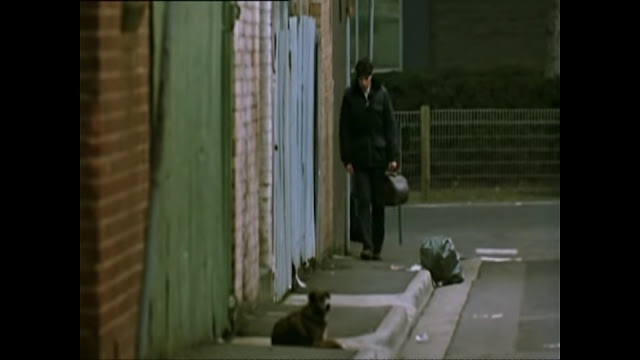 Malcolm is one of Australia's comedy classics. Embarrassingly, as a kid I thought this was a prequel/sequel to Malcolm in the Middle! The film encapsulates Aussie cinema well, showing a slightly unconventional look into Melbourne life, and turning into a crime caper as it goes along. 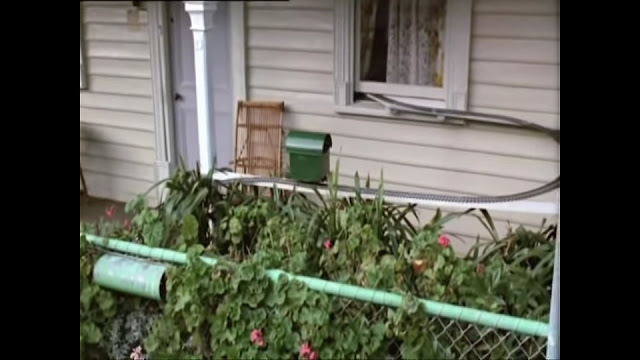 The tone in Malcolm is low key and realistic, rather than broadly comic and zany. This could have clashed with the kooky inventions, but they mix well, and make sure the film never gets too serious or glum. The important thing is to know what kind of film you're in for, because if you go in expecting a laugh-a-minute gag-fest, you're likely to be disappointed. 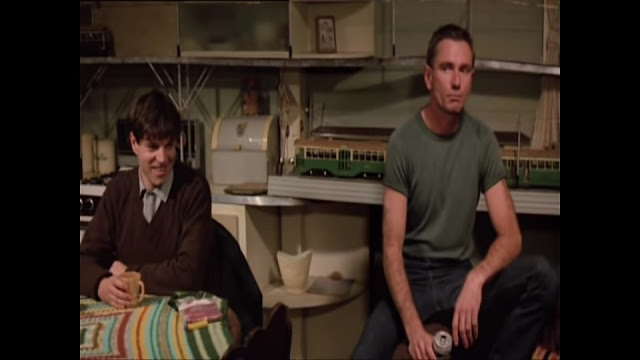 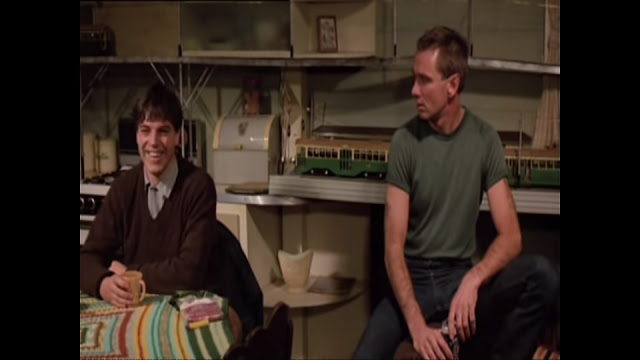 As for my opinion, I do like the film how it is, but I did wish it was more fun at times. This is especially evident in some scenes, where things are cheery and lighthearted, only to be dragged back into awkwardness and drama, with characters often being negative.
Malcolm is a good protagonist. While he may not speak for long stretches of time, or show much outward emotion, he's easy to empathise with, and his childlike and inventive nature gives him a real charm. He feels very authentic, rather than a glammed up Hollywood portrayal of Autism. 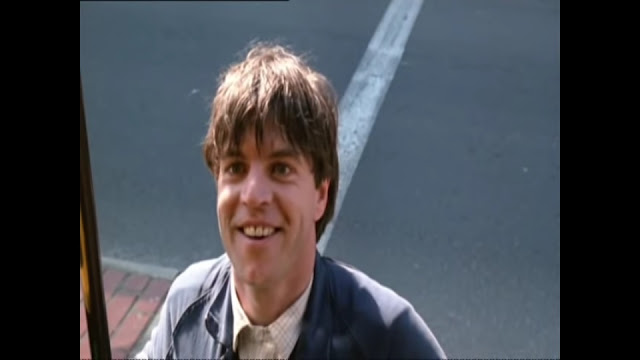 Frank on the other hand is a pretty unlikeable guy. Irritable and constantly on edge, he spends most of his screentime shouting at either Malcolmn or Judith, and even funny or sweet scenes are ruined by him.
Judith is more the voice of reason, and is instantly intrigued by Malcolm, in an almost motherly way. Although she too isn't perfect. Frank remarks about her habit of wandering around the house practically in the nuddy in front of Malcolm, and while she tries waving that away, she does do it! Openness with nudity is one thing, but it's generally not considered polite to practically flash the landlord every time you walk down the hallway, especially if he's easily rattled.
Other characters include a neighbour smitten with Malcolm, but she doesn't appear enough, and is written out halfway through, strangely. Then there's the local storeowner, who means well, but puts Malcolm's interests down, and insists he put his intelligence to something worthwhile. He is, you bitch! I bet someone else could say the same about you. She makes sweeping judgements about the skill of Malcolm's mother, saying she messed  him up and 'would be horrified' if she saw him now. I bet she'd be horrified that her genius son built a tram from scratch out of spare parts, in his off hours, and was fired! I bet she'd take his old bosses to court, then send some of his gadgets to a toy or car company and get her son a job worthy of his talents! So stick that in your pipe and smoke it, sheila! 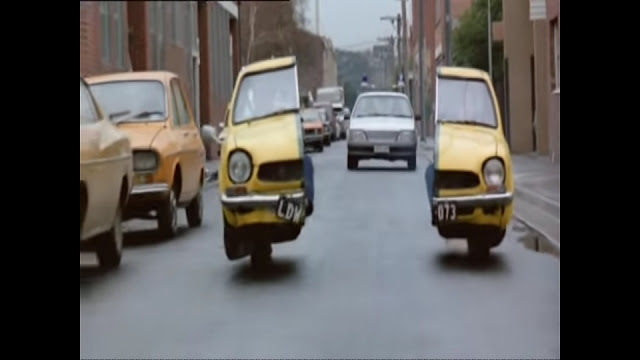 The climax is great fun, a mix of amusing and thrilling. It's definitely one of the most original bank heists seen on film, and well executed! The only complaint I have is that there are a few details that make me think 'Oh, there is no way they wouldn't be found out because of that, or that!...', and that does take you out of the movie a little, but that's all. The film is upbeat enough and we know that despite any little niggles like that, our heroes are gonna be fine.
The effects too are neat! The highlight is the fantastic split car, and the other gadgets throughout are cool as well. Malcolm's whole house is full of nice little gizmos, and they'd all be pretty handy! 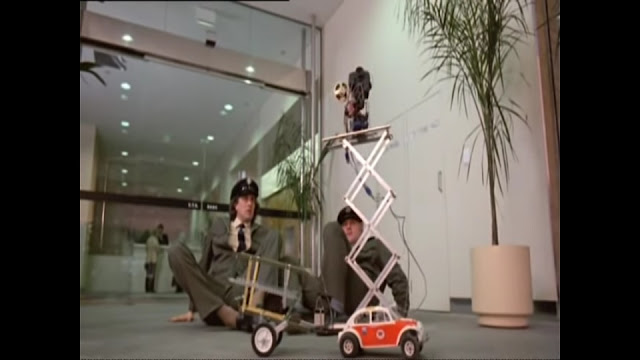 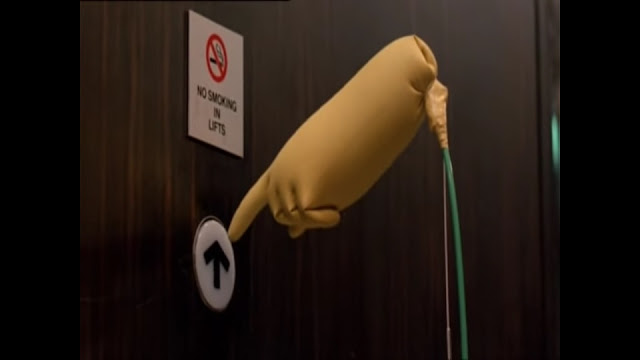 The score by the spectacularly named Penguin Cafe Orchestra is a delight. It's warm, cosy, and unique too, most notably the heist music. It perfectly captures the humdrum life of Melbourne, and makes the poorer suburbs seem just a bit less shitty.
The cast here is small but very effective. Colin Friels is a great lead, and perfectly captures his mannerisms and mindset. John Hargreaves is prickly, and almost does too good a job at playing an asshole. Lindy Davies is warmer, providing a good counterbalance. Bud Tingwell gets a good role, though only for one scene. I would've liked to see him appear more. 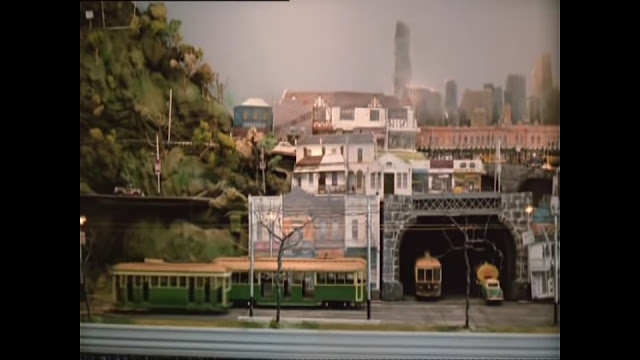 Malcolm might not be for everyone, but is a good example of a local homegrown comedy, with nice representation and fantastic inventiveness...
Posted by Chris at 7:45 AM