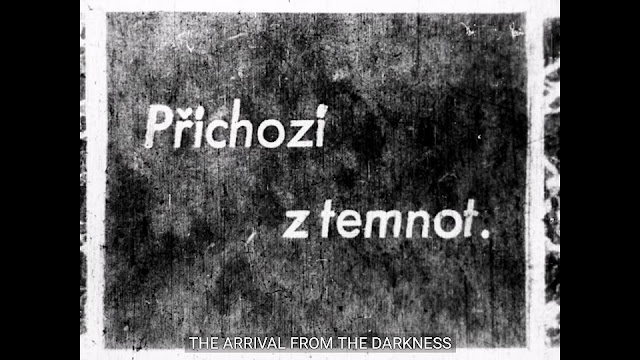 Well-to-do landowner Bohdan Dražický is living with his beautiful wife Dagmar at his ancestral castle, when one day they receive a call from Richard Bor, a 'friend' and former occupant of the castle. He offers a gift of an old book on the occult, and secrets of the family estate, interesting Bohdan greatly. Bor has his own motives, and manipulates Bohdan into venturing through a secret passageway in the Black Tower, then locking him in, leaving Dagmar all alone. 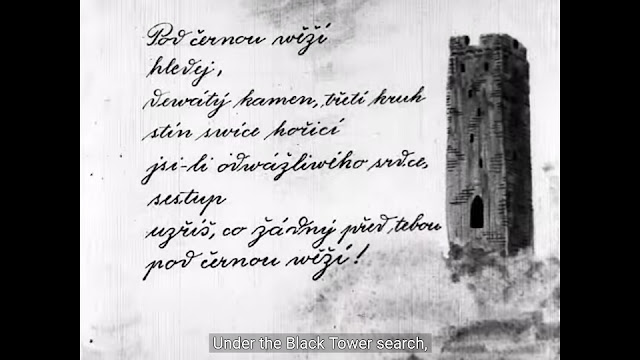 Inside his ancestral tower, Bohdan is resigned to his almost certain death, until he makes an unearthly discovery. Seated in a laboratory is the suspended body of a man from hundreds of years ago. Forced to resurrect him to find a way out, things go well at first, and Bohdan's ancestor is friendly. But soon he too sets eyes on Dagmar, the spitting image of his own lost wife... 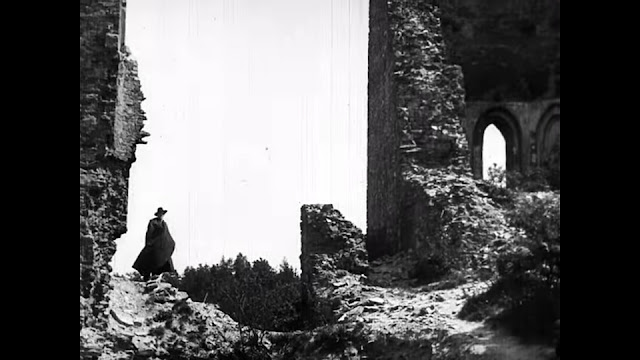 The Arrival from the Darkness is a real unsung gem of silent horror history. Coming from the expressionistic era that gave us classics such as The Cabinet of Dr. Caligari and Nosferatu, this feels like a kindred spirit to those films, while at the same time doing its own thing. The story is like a dark fairy tale, with many familiar trappings. Old castles, grand bearded sorcerers, unrequited love from dastardly villains, fair maidens, the lot. 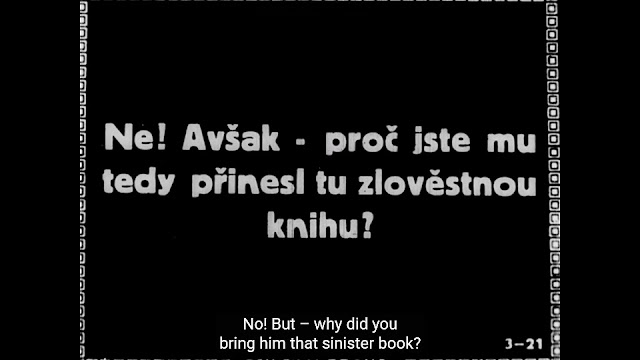 The film has a very strong first act. It introduces the three central characters and their personalities very well. Events are quickly set into motion, and we are suitably on edge. Bohdan finding the mysterious body and the attached note is an ominous moment, and my first impression was he was resurrecting a vampire, which wouldn't end well.
Here's where it makes its first major misstep though. How, you ask? Well, this resurrected corpse turns out to be a completely agreeable fellow, with no evil inclinations whatsoever! A pleasant surprise, and no doubt better than what the protagonist was expecting, but it does take the wind out of the film's sails. You know what really deflates it stone dead though? This guy's bloody flashback! It lasts for damn near 30 minutes, and turns the film from an ominous horror into a period drama with a dash of romance! 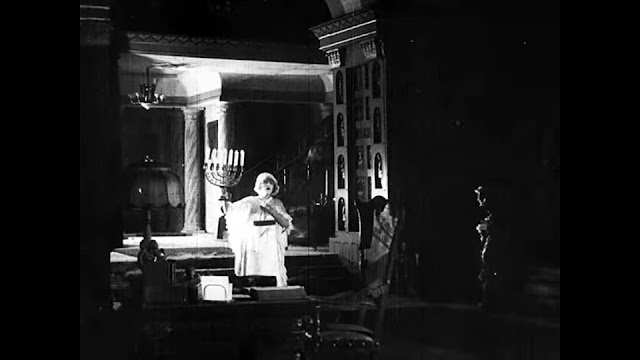 I suppose the mixing of genres isn't so much the problem here, as it is the sheer amount of time this takes up (an entire third of the hour long running time). At the very least one can't fault it for not fleshing out its antagonist. Although it might actually go too far, stripping away any mystique. That's up for debate though, and I didn't mind. 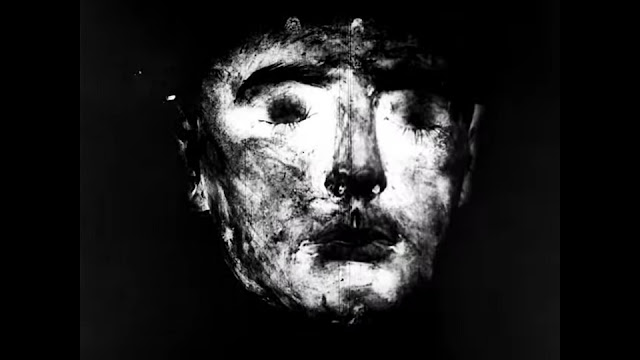 Thankfully the film does eventually shift back into horror for its last act, though it doesn't amount to much. The film had a bit of an unsatisfying climax. My main issue was that I honest to God couldn't tell who was who! All these Czech guys look the same! Same height, same clothes, same hairstyles and colours. Couldn't at least one of the bastards have been blonde?!
The ending itself almost felt like a cop-out, but I ultimately liked it. There was still an air of mystery, and the film ends on a positive note. 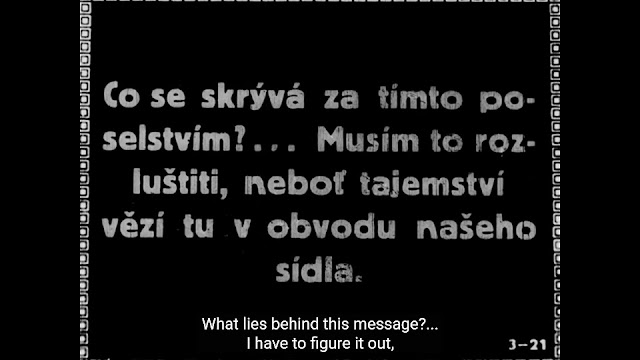 Bohdan is a decent main character. He's a bit too bookish for his own good at times, but he always does the right thing. For example, when Bor distracts him with the book and tries putting the moves on his wife, Bohdan is quick to throw the tome down and eject the lecherous asshole from the property. Afterwards he continues to be a good hero, and when the chips are down and he thinks his ancestor has gone too far, he's the first to rally against him.
The victim of the piece is Dagmar. She's just going about her day to day life, when not only is her asshole neighbour openly lusting after her, but so is the undead guy her husband found! It's a wonder she doesn't flee to Aruba or Dominica. Luckily she makes it through all these nuisances just fine. 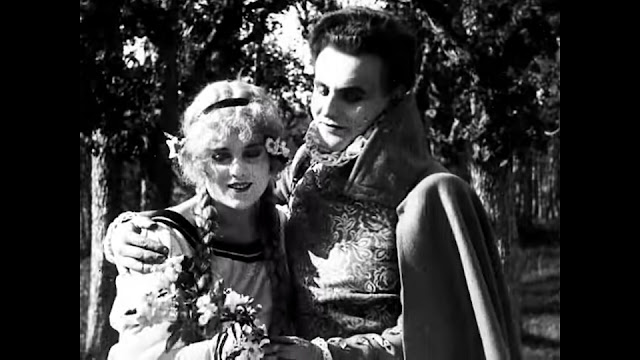 The man from the past (Ješek Dražický, which you can be certain I didn't type myself) is a pretty good bloke at first, with a sympathetic backstory. The climax is spurred on by him seeing his dead wife in the identical Dagmar. [This is where I have another issue.] I feel the movie doesn't do a good enough job making him out as a bad guy. Yeah he wants to steal away Dagmar, which causes conflict, but I feel like there should've been a little more oomph, like maybe the resurrection potion makes him want to eat virgins or something. As it stands, it feels like nothing a bit of psychiatry won't fix.
Bor is an ok antagonist, though a bit ineffectual after the first act, and never really amounts to much when there's an undead sorcerer on the loose, with the exact same motivation, no less. 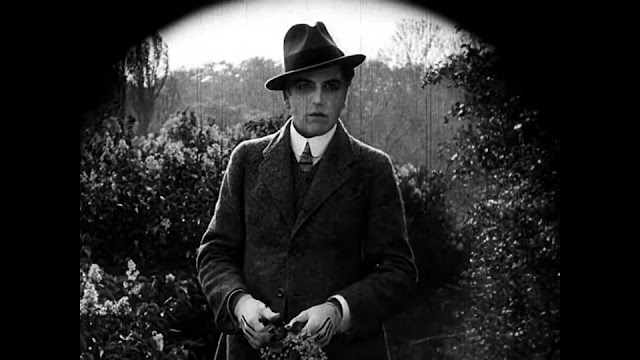 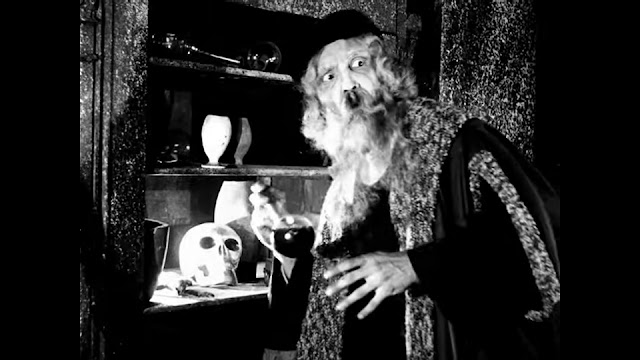 The actors all do good jobs here. Czech starlet Anny Ondra is effective and pretty, while Theodor Pištěk does well as the hero. Famous Czech actor and director Karel Lamač is good in his role, getting to be romantic and mildly villainous, while Vladimír Majeras is suitably shifty. A lot of the actors pull double duty too in the flashbacks, with the most impressive being Majeras, if it's true he also plays the ancient alchemist Balthazar del Borro.
The direction in Arrival is great. There are many well staged moments, and gogeously framed shots, all working perfectly in conjunction with the spectacular antique setting. The film was shot partly on location, and partly in sets, and you wouldn't know the difference. The way the film looks has some stylish flourishes. Not only do we get the shimmering lens circle, but also a firm triangle, which I haven't seen before this. It adds a very unique visual touch! 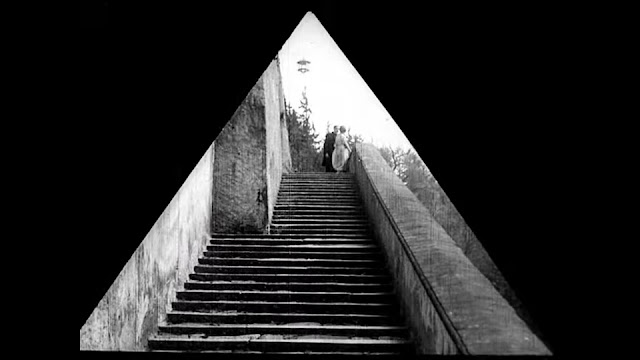 Arrival from the Darkness is a real neat discovery, and what better treat could it receive for its 100th birthday than more discussion and more fans. The film is available free to watch, remastered, and with subs, on the Czech Classic Film archive's official youtube channel, who are bloody tops! Hundreds of films to enjoy, all for free. I only wish more companies cared about their archives like this...
Posted by Chris at 7:37 AM