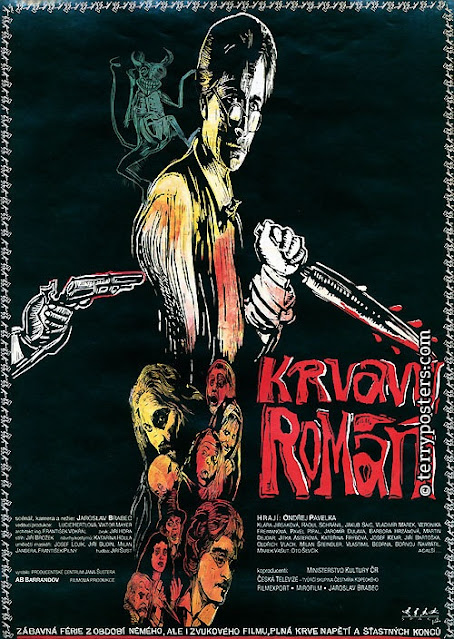 An author in the 1920s is trying to piece together an important book, full of bloody stories. Noblewomen getting mutilated, farmgirls shot, madhouses run by lunatics, pirates attacking. It's as if the book is a distillation of all human violence... 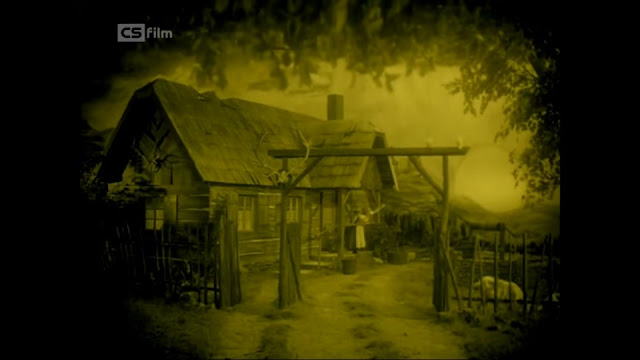 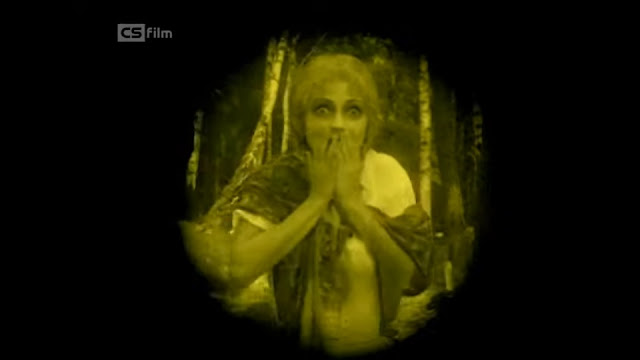 Krvavý Román, aka Bloody Novel, is an interesting film in many ways. Based on a book by classic Czechoslovakian author Josef Váchal, it's a dense anthology, with close to a dozen little stories. There's a farmer's daughter and her beau, a noblewoman encountering string of bad luck, an insane asylum with cannibalistic orderlies, a corrupt priest, an island adventure, etc. Each story is filled with senseless and often unexplained violence, to great effect. 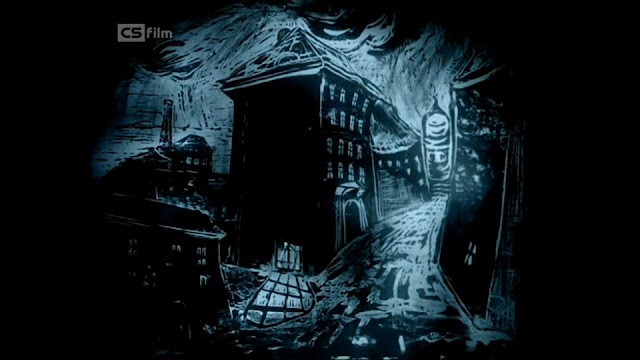 But for a film so bloody, death holds surprisingly little impact at times. In one scene the farmer panics and stabs a detective in the throat...But then they see they have matching tattoos, and realise they are old friends! They hug warmly, no harm, no foul. Nor does the spurting arterial wound seem to bother the copper much.
With so many stories to take your attention, and none getting resolved before moving to the next one, the film is a little overwhelming at first. You're likely to get a bit lost, but as long as you just let it sweep over you, the film is still enjoyable as a spectacle, and that may well have been the intended point. 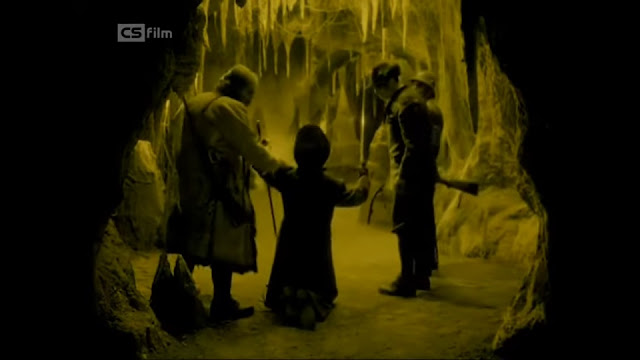 I'm not usually a fan of the adage that you need to see a movie multiple times before you 'get' it. It's ridiculous! Certainly a film can be more rewarding when you see it more than once, and see little threads, jokes, or easter eggs that went unnoticed before. But if you honestly don't understand a film after one viewing, it's failed! As for Krvavý Román, it manages to hit a sweet spot just in the middle. While the film is a mind-melting experience, you will ultimately understand it on a first watch, but the second will provide more enjoyment now that you have greater familiarity with the film's structure and vignettes.
If I had a criticism of Krvavý Román it's that the stories are linked, even though they're not. It's like the author went to a bit of effort to connect the dots, but gave up partway through. Then there's the lack of wrap-ups. While I understand it is the point of the collection to not have conclusive endings to any of the stories, it's still frustrating, especially since it feels many of them just stop mid-way through. 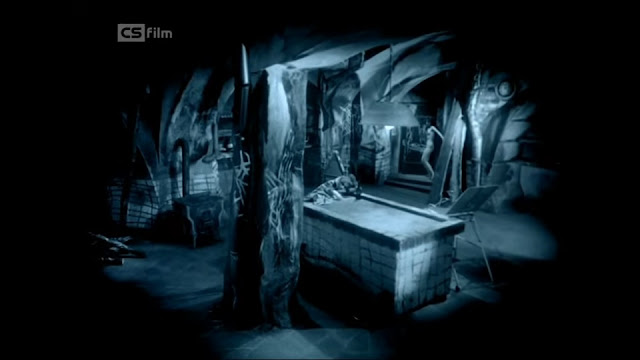 The ending is the only part of the film that really disappointed me. The exchange between Váchal and his characters is alright, though doesn't amount to much. But it's the final shots of the movie that really bugged me. It's just so bland. We see him sit down, eat a couple bits of what I assume to be cheese, and casually reads, and that's it. It felt a bit lacklustre and random.
As an adaption, Krvavý Román is not only faithful to the text, but loyal to the book's spirit, and it manages to pull of the near-impossible. It takes a very metatextual book about the written word and not only adapts it successfully, but also turns it into a meta examination on cinema too! There are some camera tricks, and the film even burns away at one point. The The film's editing is great, with many magical flourishes that'll have you rubbing your eyes. 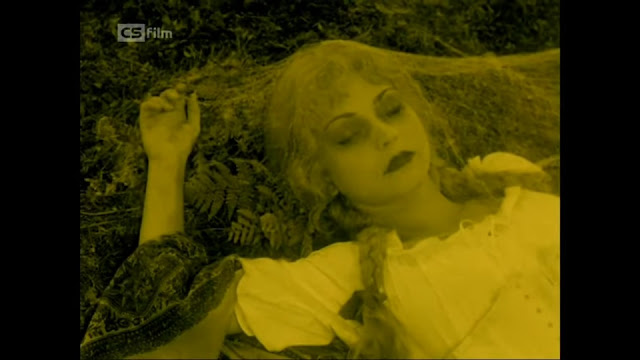 Krvavý Román has wickedly funny and over-the-top captions, with a poetic narration in the 'framing' sequences. So poetic and fancy that even Czechs might have trouble understanding it! The intertitles are quite long too. Even Czech natives might struggle to read them given how wordy they are, and how quickly they can pass by. 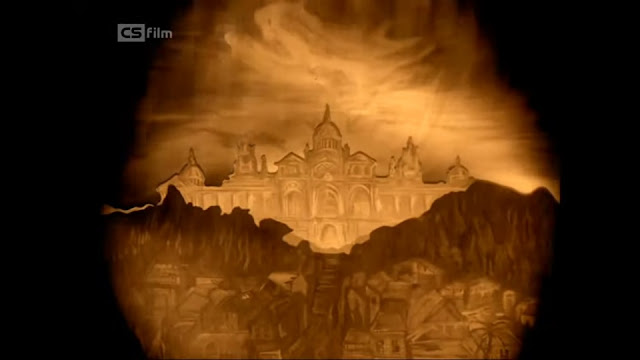 The set design here is fantastic, with many great locations. Krvavý Román is incredibly faithful to the design and aesthetic of silent cinema. The only times where it shows its true period (the 90s) is when it deliberately does so, such as the sudden appearances of real locations, or a full screen shot, instead of any fancy filters. If not for those things, and the sudden flashes of amusingly modern gore and nudity (I see London, I see France, I see the farm girl's not wearing any underpants!), you'd think you were watching an authentic film right out of the 20s! 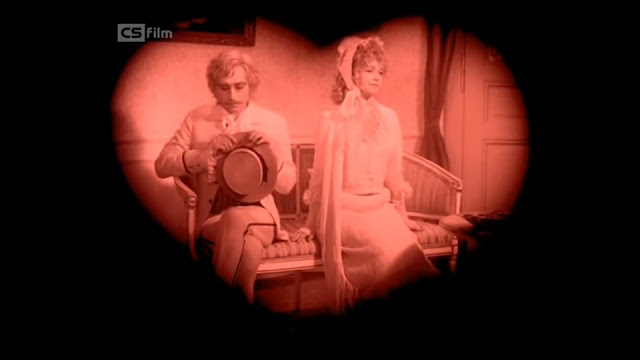 The film is tinted just like many silent films, and unlike quite a few of them it fits really well! Sometimes tinting was done to set the mood or provide a sense of colour, i.e. yellow for a sunny day, blue when it's dark, etc. But most would have colours at complete random. What Krvavý Román does is use every colour under the rainbow, but uses them to distinguish each story from one another! One might be pink, another blue, another green, etc. There's a bit of overlap when the stories mix and match, but by and large this is a fairly helpful way of telling what's going on and where you are in the complex story. 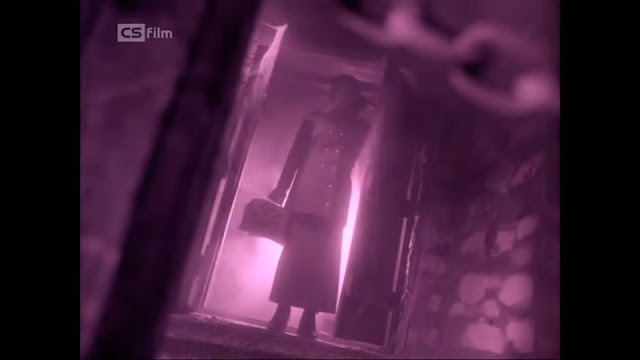 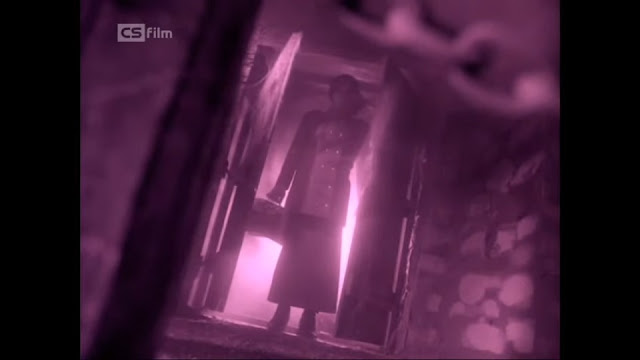 Another interesting element is the use of sound. While silent for the most part, a character in distress might yell out, and then surprise themselves when they actually hear themselves make a noise. Spoken dialogue plays a decent role in some sections.
The soundtrack is delightfully spooky. It has a classical silent film feel, with grandiose and occasionally melodramatic tracks, all with a sense of fun. The film also relies on natural ambient noises, especially over the end credits. 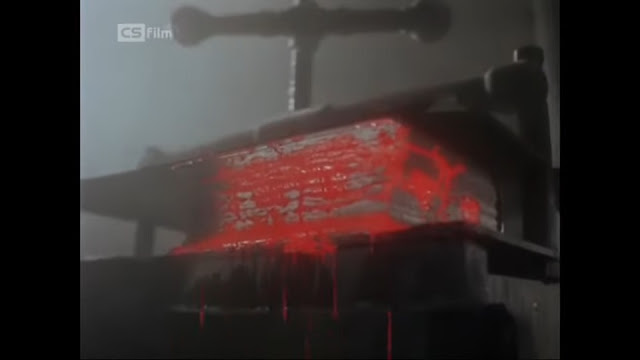 Krvavý Román is a very interesting and enjoyable picture, as well as a marvellous pastiche of a bygone era of cinema! It's well worth checking out, and I'm sure the original book would be just as fascinating, even if you'd have to know Czech to read it...
Posted by Chris at 7:37 AM