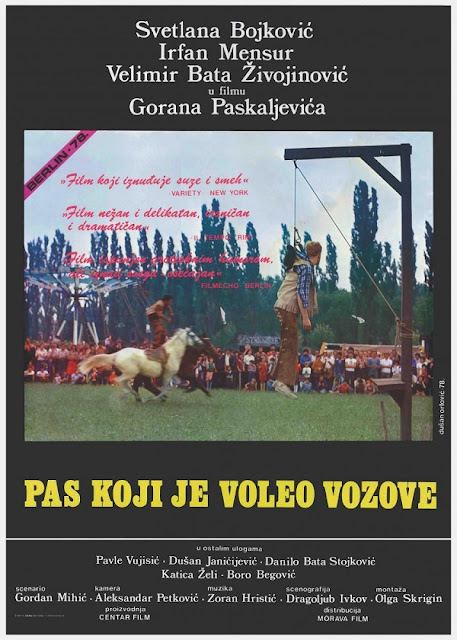 Director Goran Vljsnijnjic (or Višnjić if I spell it properly*) is responsible for many diverse kinds of drama films in the Serbian region, before and after the fall of Yugoslavia. He made realistic and sweet (but still somewhat heavy) movies, like Illusive Summer 69, and Tango Argentino. Alternatively, Balkan Cabaret is the worst tourist ad imaginable, and after reading a plot description of the deceptively titled The Optimists, I don't think I can ever smile again. The Dog Who Loved Trains is an earlier effort from him, and really spotlights both the good and bad in his filmography...
*Or Paskaljević if I remember his name correctly. So many Gorans! 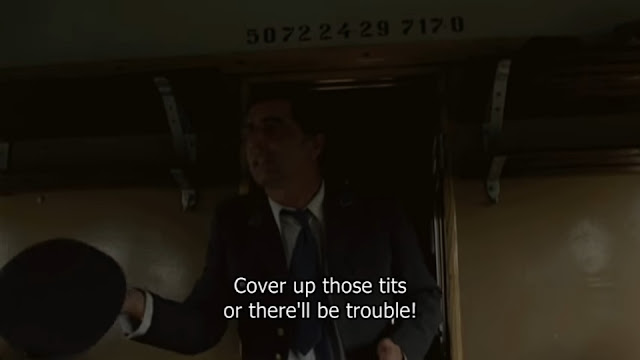 Mika is a female convict recently escaped from a transport bus. After briefly hitching up with travelling with western carnival operator Rodoljub, she runs off once again, this time with a young boy in search for his lost dog. Together they have many exciting and scary encounters, before their search comes to a dramatic conclusion... 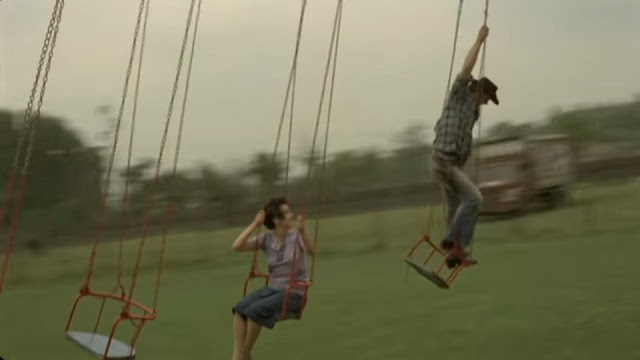 The Dog Who Loved Trains gets off to a strong start. It introduces us to all three main characters in a quick and economical way. We understand their personalities, and they are distinct people with clear goals. The movie continues in a good way, feeling like a down to earth exploration of life on the ground level of 1970 Yugoslavia. It may not be the fanciest place in the world, but it comes across as nice and familial. 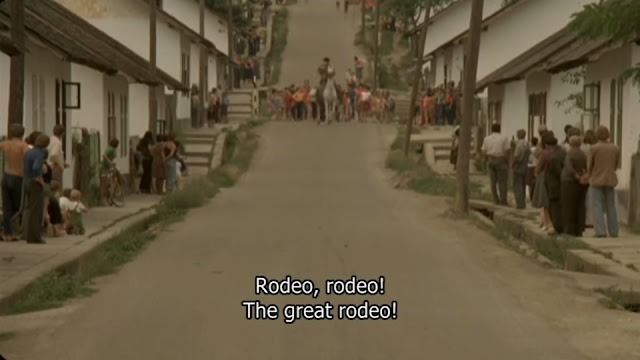 Where the move began to disappointment me was halfway through, when it veered wildly off course and became a melodrama. The first misstep for me was with Kauboj, whose personality suddenly changes, leading to his exclusion from the rest of the film. From here on the film becomes more of a double act, between this older woman and young man. I found the story got less interesting as it progressed, and the final act really pissed me off! 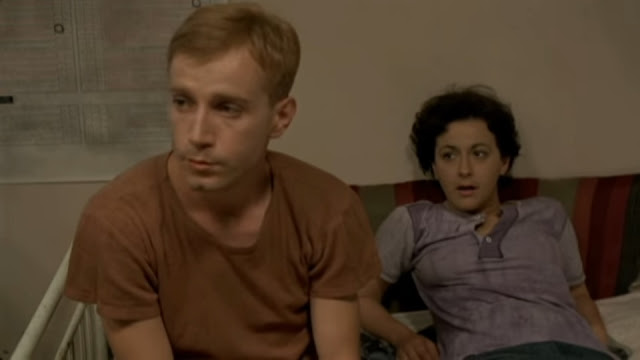 It's in the last 20 minutes when The Dog Who Loved Trains completely loses sight of any happiness. It becomes a joyless affair full of rape, death, and misery, culminating in a total downer ending! The only good news is that the dog is at least found (if only by the viewer). I understood what the film's first half was trying to be, but the second completely lost me. It just felt like misery for misery's sake.
Onto the characters. Mika is a reasonably likeable heroine. Despite being a brusque convict, she's never a bitch, and she gradually becomes sympathetic (well, slightly). At the start (after an amusing prison transport sequence), she has another runaway convict tagging along, but she was quickly thrown to the side, which I thought a shame. The movie has a lot of potential double acts it ignores. 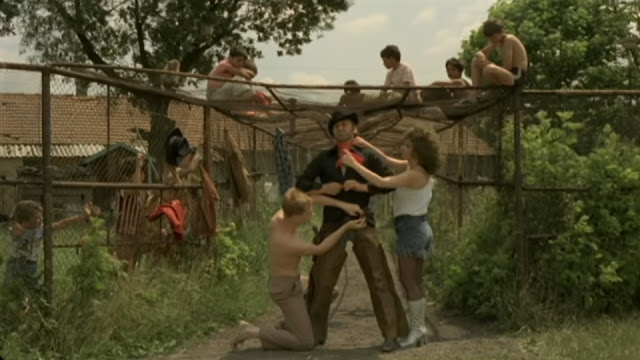 Kauboj, or Kovboj   starts out as a good guy, salt of the earth and trying to make a living out of a niche but effective trade. This is until for no reason he decides to betray his new friend and coworker, completely screwing her over and depriving himself of some much needed help. It feels like the writer just ran out of ideas for him, so wrote the guy out as soon as he could. 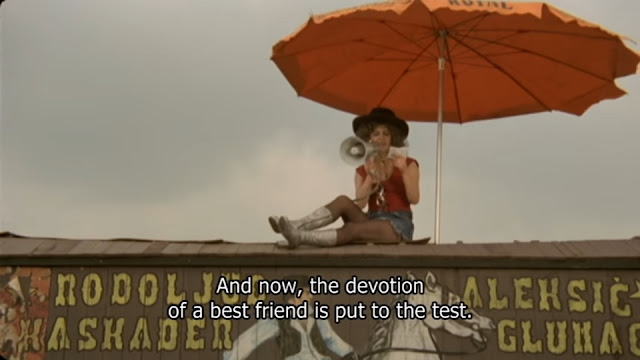 The young Mladić isn't as distinctive as the other two leads, nor does he have the biggest story, though he has the greatest connection with the title. His search for his dog endears him, even if it's been so long already with no success. The movie seems to forget he started the movie with a girlfriend though, and tries pairing him off with Mika. 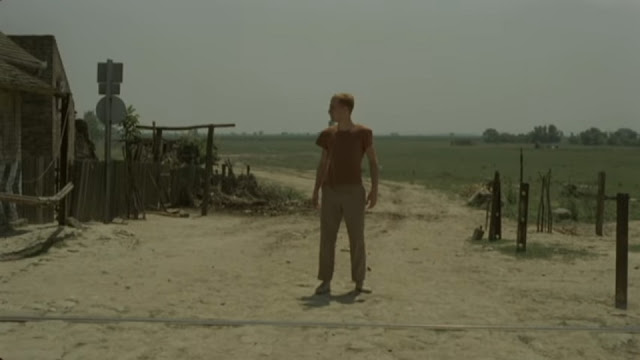 The cast do good jobs. Svetlana Bojković is an effective lead, doing the most to carry the film. Velimir 'Bata' Živojinović is good when he appears, and is missed later on. Irfan Mensur is decent, even if he doesn't get as much meat to chew on as the other leads, while Danilo 'Bata' Stojković has a nice but all too brief role as Mika's father. 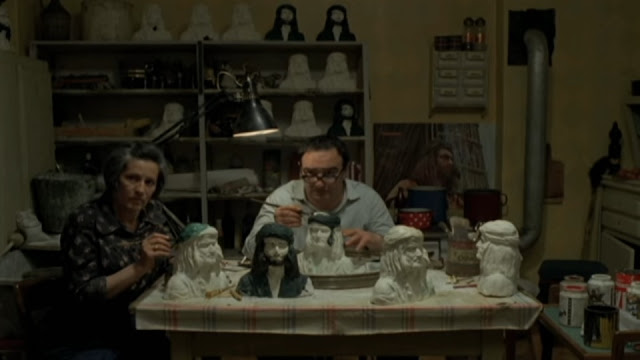 The score is an eclectic mix of ethnic music, foreign instrumental tunes, and synthesiser heavy tracks, reminiscent of the 80s (impressively so given how it predates the decade). The ambient sounds of trains going by often permeates the action, and gives a neat feel. 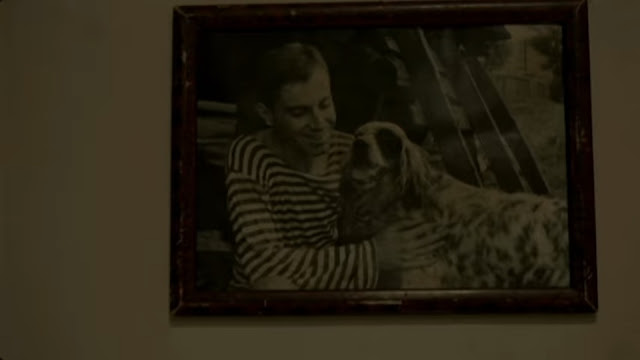 The Dog Who Loved Trains is worth watching for those with an interest in Yugoslavian cinema. If you don't mind slightly depressing things, you'll love it, and if you prefer more lighthearted fare, you'll get a little here, though not as much cute dogs as there should have been!...
Posted by Chris at 8:08 AM