[May Monster Madness]-Horrors of the Black Museum (1959)

Horrors of the Black Museum was the first of what film critic David Pirie referred to as the 'sadian trilogy', along with Circus of Horrors and Peeping Tom, as they all had "an emphasis on sadism, cruelty and violence (with sexual undertones) in contrast to the supernatural horror of the Hammer films of the same era".

Horrors of the Black Museum also used Hypnovista, one of those goofy William Castle-style theatre gimmicks.

HotBM is about a writer of horror fiction who's gone off the deep and is causing people to die so he can get inspiration for his novels.


The movie opens by introducing Hypnovista, and credits Emile Franchel, a psychologist with a speciality for hypnotism. Then the movie tells anyone in the audience who's ever been hypnotised by Emile Franchel to step out of the theatre for the next thirteen minutes! (the theatres of the 50's were awesome!)

The movie cuts to Franchel (actually a real person) giving a lecture to the camera. He talks about hypnotism, and the power of suggestion, and after he talks about the contagious power of yawning (which did make me yawn! What the hell is up with yawns!?) he shows several mind-bending images, then tries to hypnotise the camera with an archimedes spiral. Then he starts waffling on about how easily other senses can be fooled, and he gives a very stupid example. He says that when we carry ice somewhere, out touch senses fool us into thinking that our hands are burning (heat burning, that is)-Nope, wrong, and incorrectomundo, Mr. Franchel you dumbass, cold burns as well! Where did this guy get his doctorate!? So in total,  this bloody lecture goes on for thirteen minutes! 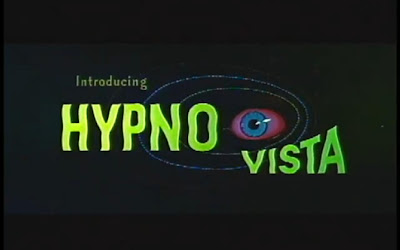 The movie starts off properly in London, with a mailman handing a package to a woman. The scene that follows is actually pretty disturbing, so I won't spoil it for those who want to see the movie. After the woman's death, her friend who witnessed it talks with the police. After she leaves, (crippled, and with a cane) writer Edmond Bancroft (Michael Gough) arrives, asking to see the object that killed the woman. Surprisingly enough, they actully let him look at it, instead of booting Bancroft the hell out of their office. This woman's murder is the third that's ocurred in the past two weeks. Bancroft also points out that the weapons used to kill all three victims are all similar to ones in Scotland Yard's Black Museum (a collection of "criminal memorabilia"). 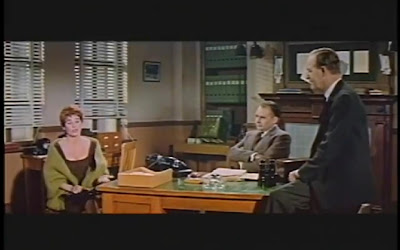 Bancroft goes to his doctor, Dr. Ballan (Gerald Anderson) to get a check-up, and Ballen warns Bancroft, telling him that he can't stomach murders (until he writes about them), and that the stress could give him a fatal heart attack. Bancroft shrugs off the advice and leaves. Bancroft arrives at his home, where his assistant Rick (Graham Curnow) is doing research for Bancroft's newspaper column. Bancroft then goes into his own private black museum and waxes about how cooler it is compared to Scotlan Yards (sure, he's conceited as hell, but the museum is awseomely macabre!). Meanwhile, Dr. Ballan dictates to his nurse that he is worried that Bancroft's mental health, and that he thinks the writer is becoming unbalanced. 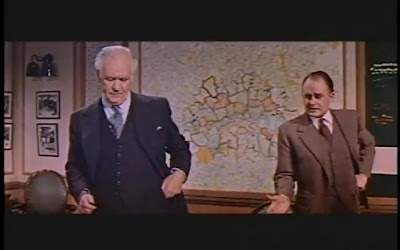 Bancroft goes over to his girlfriend Joan's (June Cunningham) apartment, where she angrily breaks up with him. Joan goes out in a bar and has a night on the town, and when she's hammered, she's escorted back to her apartment by a couple of policemen. She gets kitted up in a knightie, goes onto her bed andWHAM guillotine to the face! Or rather, she just lies down and screams instead of moving! A deformed man is responsible for the murder, and he flees the apartment, seen by many. 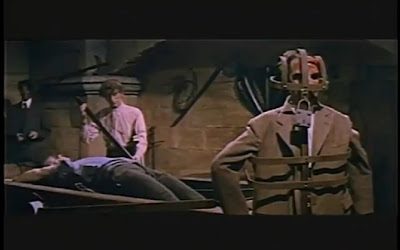 The police arrive at the scene of Joan's murder and the apartment's tenants get a chance to overact when describing the killer. They all describe the killer as an old man, and a kid speaks up and says that earlier, he saw a man with a cane at her apartment. Later, Bancroft is at a party, and he talks with the police commisioner, who tells him that the police caught the murderer, a man named Tom Rivers and got a full confession for all four murders. 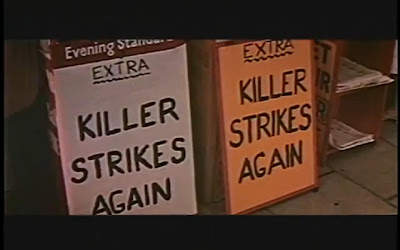 The film cuts to the police station, where Rivers (Howard Greene) is being interrogated. He confesses to all four murders, and several others. He also cofesses that his next murder will involve a death-ray that he'll shoot from his eyes. The police, who recieve a report that Rivers is a harmless schizophrenic, doubt his guilt, and they decide to play along with his confession (for some reason).


Meanwhile, Bancroft talks with Rick, then leaves, and Rick sneaks out. He goes to a park and visits Angela (Shirley Anne Field), his girlfriend. When talking about Bancroft, Rick says that he feels an unknown hold to Bancroft, as if he can't disobey any word he says. 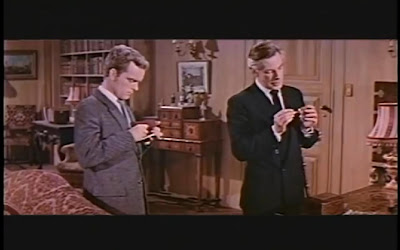 This isn't a very good movie, it sucks to say. I was expecting a fun movie, but Horrors of the Black Museum is just boring. As for the film's positives, the murders are cool (and sometimes very silly-fun silly) and Michael Gough is great as the psychopathic Edmond Bancroft. The rest of the acting is decent. 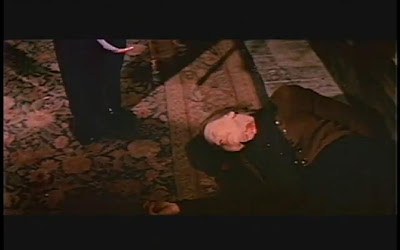 Onto the negatives, for one, the thirteen minute opening is annoying, and for a movie with a 'Hypnovista' gimmick, hypnotism doesn't even play into the damn movie! There are few murders, and long stretches of boring talking scenes in between. Some character's act really stupid too! A shopowner associate of Bancrofts sees a picture in the paper and notices that the murder weapon (the one from the film's first scene) was purchased from her store. So she decides to blackmail the psycopathic serial killer-naturally, ten seconds later, she gets ice-tonged to death. The other stupid character is Dr. Ballan. He realizes that Bancroft is the murderer, but instead of notifying the police, he goes directly to Bancroft and tells him to come with him as doctor/patient to the station-the 'smart' Dr. Ballan not only gets zapped by a death ray (um...) but also dunked into a vat of super-acid, which turns him into a science class skeleton in seconds! 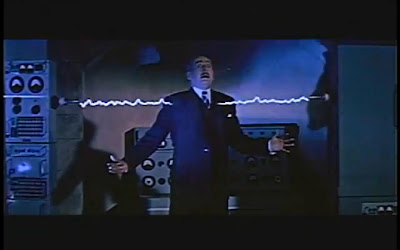 The film's ending was also anoying as well! This is a film that I wouldn't recommend to any fans of horror, save for the opening kill and Michael 'Alfred' Gough's great performance. Neither of them can come close to saving this movie.
Posted by Chris Hewson at 9:38 AM