Wow! What a cool poster! Just look at it! It's like the poster of The Eerie Midnight Horror Show! 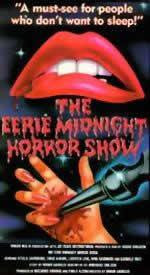 Yeah, that exists, and 1)-It has nothing to do with The Rocky Horror Picture Show or Shock Treatment; and 2)-it's terrible! As for Night Fright, aka, ETN: The Extraterrestrial Nastie, I don't really know what to say for an introduction, so I'll just jump right into things. 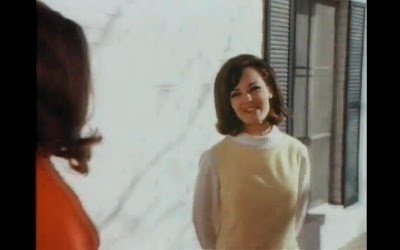 Night Fright opens with a couple in a car out in a dark forest. They make out until they hear a special news bulletin on the radio. A 'fiery object' has crashed nearby in the forest. The two shrug it off and start making out, right when a POV-shot comes out of the trees and kills them...

After a segue, the movie cuts to Judy (Dorothy Davis), (a woman with unnaturally large hair) talking to her friend when her boyfriend Chris (Ralph Baker Jr.), and they go out for a drive in the country. They arrive in the forest where the 'object from space' fell and Judy wants to see where it crashed (and her voice goes higher than Mika!). Chris then starts rambling philosophically, and even the movie finds him uninteresting and cuts him off mid-sentence! A carful of Judy and Chris' friends, Rex (Frank Jolly), Darlene (Darlene Drew), Carla (Janiz Menshew), and Mitch (Russ Marker) arrive and ask the couple if they want to go to a dance club with them. The couple decline and the friends drive off. 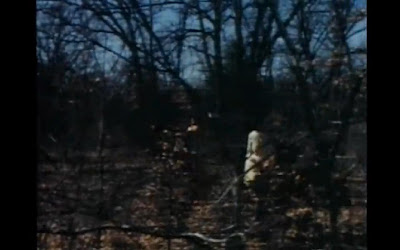 After nearly a whole minute of just the two looking at leaves, Chris tells Judy a genuinely funny story. Then the two run after each-other playfully, until they come across... 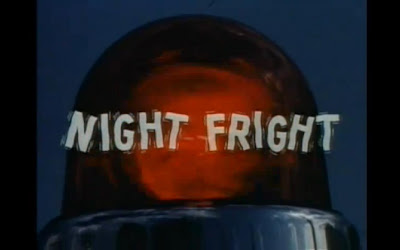 Yeah, that's the title card-over ten minutes into the film! After the long overdue opening credits, the cops are nearby where a government rocket shuttle crashed. Sheriff Crawford (John Agar) and Deputy Whitfield (Bill Thurman) are at the scene, and are approached by Professor Alan Clayton (Roger Ready), an 'egghead' from Cape Kennedy tasked to inspect the crash-site. Then Crawford and Whitfield are called over to where the murders at the start of the film took place (what Chris and Judy ran into, though that's never actually said until later in the movie). As it turns out, while the girl was killed, the guy is still alive, albeit seriously injured. Wes (Gary Mclain), a reporter (and Buddy Holly lookalike) arrives at the scene to take pictures, while the two cops search the surrounding forest. Wes finds a large gator-like footprint and shows the cops. As Crawford does some more searching, he finds a large clump of fur stuck to a tree branch. Then the movie cuts to the carful of teens from earlier, and here the film gets weird. We see the teens talk to each-other, but the movie's completely silent, save for incidental music! Crawford tells them to abandon the party they're having that night and to go back to town. After the angered teens leave, Whitfield returns and says that he followed the tracks, and they led to the site of the rocket crash site. 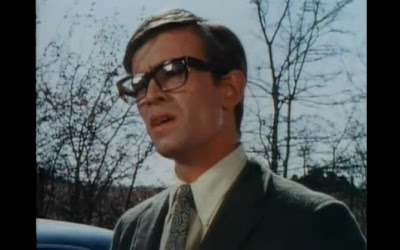 After Crawford goes to talk with his nurse girlfriend Joan (Carol Gilley) and finds out that the male victim has died, the movie cuts to Rex and the rest of the teens, in a diner. Annoyed that they didn't get to check out the crash site, they decide to sneak there after dark. After nearly half-an-hour of being absent from the movie, Chris and Judy show up again. The four plan to invite the couple along to their planned nighttime trip when they see Chris in the diner, but don't when they hear him talking to Judy on the phone about how they just want a calm relaxing night.

A while later, Chris and Judy find out from the diner's waitress that Rex and the others (plus several more people) are having a party by a lake in the forest, and they're going to go to the crash site. The two decide to find the group and get them away from the forest in case they get hurt. Then they leave the diner just as the waitress comes back with their order, and she delivers the worst-acted line in the movie-and it's hilarious! 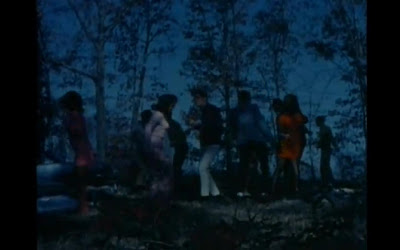 Bad acting aside, Night Fright is a fun little schlock b-movie. The film does have a few problems though. In-between a couple of talking scenes, there are long dance scene, scored with a repetitive instrumental. The film's death scenes are WAY too darkly lit. The movie also can't make its mind up on whether or not it wants scenes to be set during day or night, so the time and brightness switches constantly. The movie's backstory doesn't really make sense either. As for the ETN poster, it has nothing to do with the movie itself (I can only imagine how pissed off some people would have been watching the movie blindly after seeing that misleading poster). 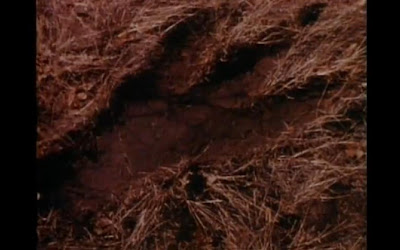 The acting is pretty bad. Some of the main cast are ok (mostly the adult actors), and the rest are bad! John Agar is cool as the sheriff. He also gets an Indiana Jones hat moment. while fighting the monster. 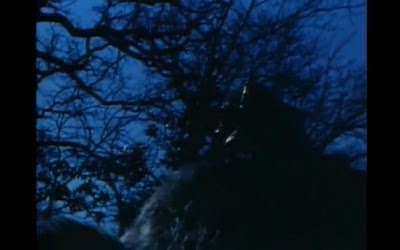 Onto the monster himself-a gorilla genetically enhanced by cosmic rays in a failed space test (or something like that)-he's barely in the movie and he's nearly impossible to see properly thanks to the bad lighting. When he can be seen clearly enough, he looks hilarious! It's just a guy in a crappy costume (in the fun, goofy way) with an unmoving plastic face! 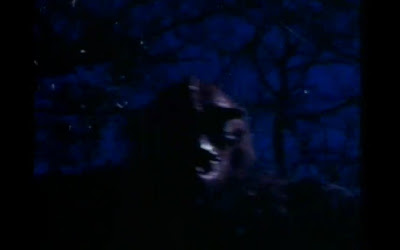 In closing, Night Fright is a fun movie, and it's worth a watch for b-movie fans, as long as the lack of monster action isn't too disheartening.
Posted by Chris Hewson at 3:06 AM