Clive Barker's Hellraiser is probably one of the most notable and iconic horror films of the 80's, and it's responsible for bringing Pinhead to the silver screen! Pinhead-the cenobite from hell, intent on giving whoever opens the mysterious puzzle box-the Lemarchand/Lament configuration-experience beyond human limits-a horror icon right up there with Freddy, Jason, Michael Myers (and others), despite his collective screentime for all eight Hellraiser movies being less than fifteen minutes (give or take-probably more).

Oh yeah, that's right, there was a ninth Hellraiser film, H: Revelations. The one that was shot out in the Mojave desert over a single week for a few thousand bucks just so Dimension films could keep the rights to Hellraiser for their upcoming remake (the same technique they did with the Children of the Corn series), the entry so bad that not even Doug Bradley returned, and he returned for a LOT! But that's a review for another day (a day when I'll be feeling chipper enough to fork out 30 bucks for the DVD). Right now I'm talking about the original Hellraiser!


The movie starts off with Frank Cotton (Sean Chapman), a hedonist, buying a puzzle box from a merchant in a dingy market. Then it cuts to Frank in a dark room, surrounded by candles, where Frank is solving the puzzle box. He solves it, and chains burst out from the box and tear into Frank. The film cuts away, and then we see Pinhead and the cenobites (Chatterer, Butterball and...Female Cenobite) amidst a roomful of gore and chains. After putting Frank's disembodied face back together on the floor, Pinhead rearranges the puzzle box, removing everything from the room. 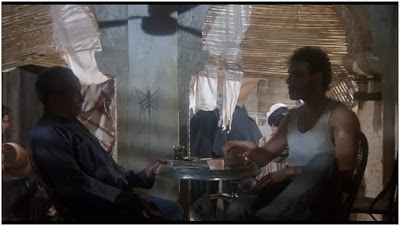 We cut to a few years later, and Frank's brother Larry (Andrew Robinson) is moving into Frank's house (formely belonging to the siblings' parents) with his (second) wife, Julia (Clare Higgins). After coming across several sacreligious objects, Larry helps movers take stuff upstairs, while Julia looks around, reminiscing about her past with Frank. A little while later, Larry's daughter Kirsty (Ashley Laurence) arrives at the house, deciding to come to visit her father, despite her negative feeelings towards her step-mother. 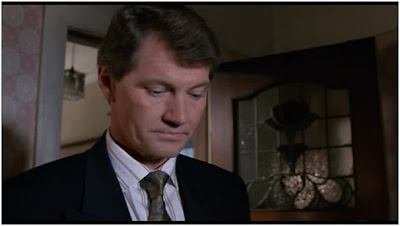 While Julia remembers about an intimate encounter she had with Frank after she married Larry, Larry cuts his hand on a protruding nail when moving a mattress. He heads upstairs to the attic, where Julia is, and almost faints, dripping blood all over the floorboards. They leave the house, and meanwhile, in the attic, Larry's blood causes Frank to partially regenerate from the floorboards that he died on.

Later at night, Larry is having a dinner party, and a slightly ill Julia goes upstairs and hears a noise, which she traces to the attic. She goes inside and finds the skeletal Frank (Oliver Smith). Julia screams and tries to leave, but Frank holds her in place and tells her that it's him. He says that he needs more blood and begs her to help him, but she runs out. 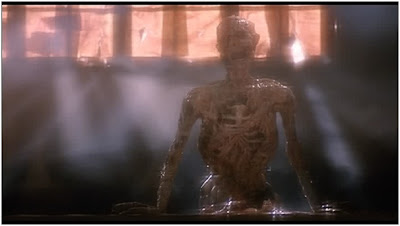 After the dinner party is over, Kirsty and her boyfriend (Robert Hines) leave and head for the subway, where Kirsty see a creepy hobo. Then, back at the house, Julia goes back to the attic and agrees to help Frank rejuvenate himself. Meanwhile, Kirsty has a disturbing dream. The next day, Julia goes into the city and hooks up with a random guy. She takes him back to the house and into the attic, knocks him out and leaves him for Frank to absorb. 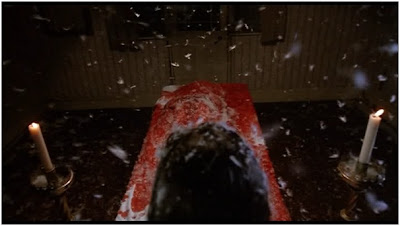 After Julia takes in more victims (and Frank explains what happened to him to Julia), Kirsty arrives at the house to try and make up with Julia on the insistence of Larry. Before Kirsty can approach Julia, she sees her with another man. Thinking that Julia's cheating on Larry, she spies on Julia, secretly following her up to the attic. Nothing is as it seems though, when Frank's latest victim, partially disfigured, lunges at Kirsty for help, and is dragged back and completely drained of life. 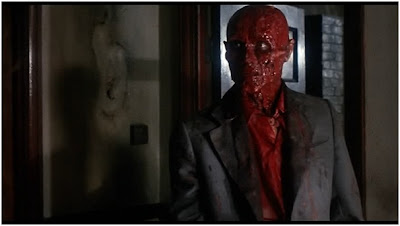 Frank sets his eyes on Kirsty, but before he can kill her, she runs into the attic, grabs the puzzle box and hurls it out the window when she realizes that it's important to him. She runs out of the house, grabs the box, and takes off, dazed and bloody from the encounter, and she collapses in the street. Kirsty wakes up in a hospital, and she gets the doctor calls Larry to see if he's ok. Before he leaves the room, he hands Kirsty the puzzle box, which Kirsty is drawn into solving... 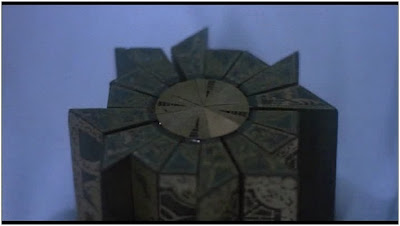 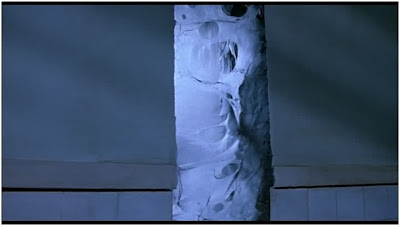 Hellraiser is a great horror film! Clive Barker was so pissed off at the film adaptations of his stories (Rawhead Rex and Underworld-aka Transmutations) that he took it upon himself to direct Hellraiser. While this could have failed spectacularly, first-time director Barker directs the hell out of Hellrais...oh, I only just noticed that pun! I am sorry, and I hope the bad pun police don't bash my door in and take me to the Minsitry of Love!...Hold on-*Ministry of Love-"Do it to Julia"-Julia from Hellraiser*...ok, I'll stop with the bad jokes now! 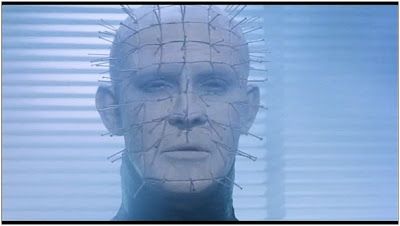 The two greatest things about Hellraiser are, 1)-The effects work. The effects work, all practical, looks GREAT!, from the Engineer/scorpion thingie, to Frank's resurrection, and the Cenobites themselves. It's all a marvel to behold!-and 2) Doug Bradley as Pinhead. Bradley, in his first big movie role, is fantastic as the anti-villain demon (angel to others), Pinhead! Apparently Bradley had the choice to either play Pinhead, or...one of the movers who have less than a minute of screen time! Hella varied roles there! Simply put, Bradley IS Pinhead, from the cold disposition, to the great lines he's given ("No tears, please. It's a waste of good suffering!"-"We have such sights to show you!"-"We'll tear you soul apart!") 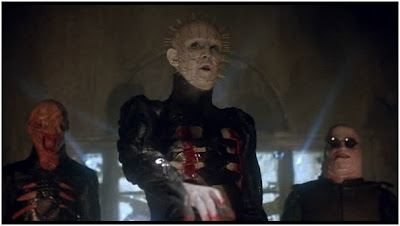 As for the rest of the acting, Andy Robinson is great! He's normal as Larry, but what many people remember him for is his role as Frank in Larry's skin. As Frank, Robinson is too cool for school! Ashley Laurence as Kirsty is good here (and she's just as good in the sequel). Clare Higgins as Julia is a cold, evil bitch (well, not so much at first) and she's great as well. As for the other cenobites, they are awesome, even if only Female Cenobite (that's seriously what she's credited as!-why couldn't they have called her Throaty, or Wires, anything better!?) has any dialogue. 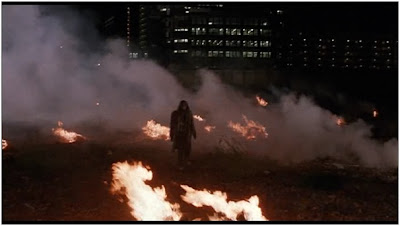 Hellraiser is definitely one of the best horror films of the 80's in my opinion, with its themes of sadomasochism, and the great acting, as well as the awesome effects, and Doug Bradley's immortal (figuratively and literally) character!

...An immortal character who only took three sequels until he blasted off into space!...
Posted by Chris Hewson at 9:10 AM