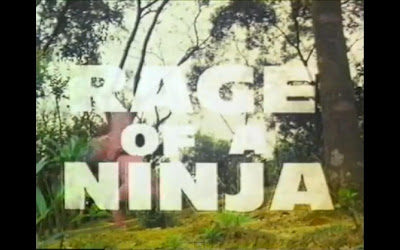 Well, here I am with another Godfrey Ho/Joseph Lai cut'n'paste extravaganza! And one which features a muscly topless Cornish man wearing fleuro yellow pants and a ninja headband, screaming "I AM THE ULTIMATE NINJA!!". There's nothing else to introduce about Rage of a Ninja, so I'll just jump right into things!

The movie starts off full pelt, with fluero-yellow ninja Mike Abbott (I don't think his character is ever named) chasing pink clad ninja, Mel (Marko Ritchie). Abbott wants Mel to give him 'the manuel', a book of ninja techniques that will make the reader invincible. Abbott killed his and Mel's ninja master to get the manuel, and he's stopping at nothing to get it back. 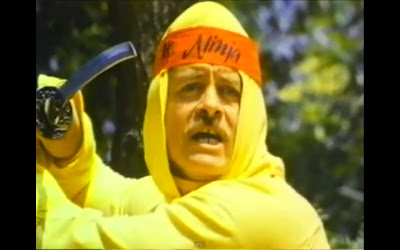 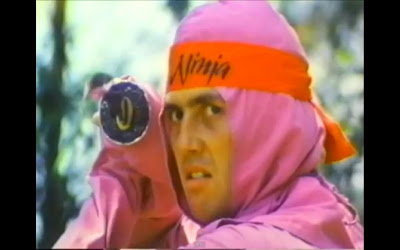 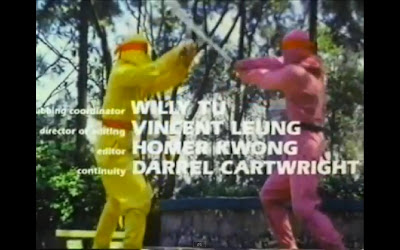 What? You thought I was kidding when I said he was wearing pink? Learn to expect the craziest things from these types of movies!

The swordfight escalates into a gun-battle, because apparently, even ninjas pack heat! Believe me when I say that you haven't lived until you've seen a yellow ninja weild a submachine gun! Mel is shot, then he wakes up, the whole fight having been a dream-flashback. 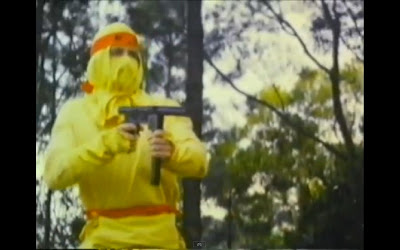 Mel, the swanky boss of an insurance company, is having business trouble, thanks to a recent rash of burglaries of his stores. The movie then cuts to Movie A, with 'an associate' of Mel's coming home, finding his wife with another guy. He beats the crap out of the guy, then said guy is in Mike Abbot's office, bandaged up, way too heavily than required just for a few cuts (of course, it's to hide the fact that this is a totally different actor). Abbott is super displeased at Bandage's failure to locate the manuel, and he ragechokes the henchgoon to death. 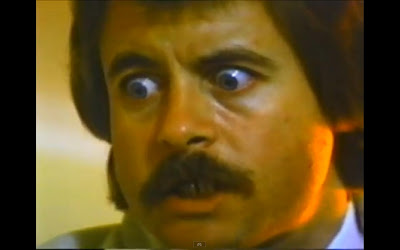 Next the film cuts to a cat-burglar, scaling a building. He goes inside and tries to steal a suitcase full of jewels, which sets off an alarm. The house's occupants fight him off, but he escapes with the jewels. His body-double in Movie-B presents the jewels to Mike Abbott, who congratulates him and gives him a holiday! Well he's a gracious evil boss, that's for sure! He then instructs his henchman Bill to kill Henry, an arms dealer-"A real mean bastard!". 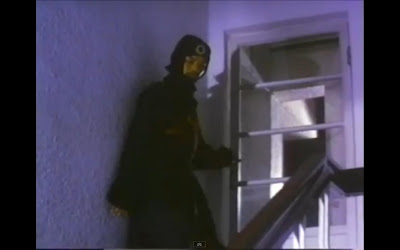 Back to Movie A, a couple of cops go to the house of a Mrs. Chan, and tell her to lock up her house, as a murderer is on the loose. She locks up, and has a bath, and while she bathes, a guy breaks into her flat, spies on Chan, then quickly makes himself a meal! Because that's totally a good idea when breaking into a house! She hears him and rushes outside, seeing no-one, then she's ambushed by the man, who cuts her phone line, and says that he's not going to hurt her. ..a promise that lasts until a minute later, when she tries to call the police from another phone. 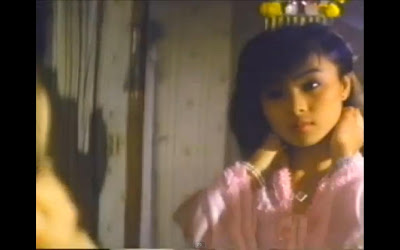 Back to Movie B, Mel is following Bill, and Henry (a blonde guy with a terrible haircut) arrives at Bill's meeting place in a park, then is immediaately killed by Bill. Mel pops up from out of the wooodwork and gun-battles Bill (all the while, the theme from Reanimator plays!). Bill escapes, and the movie cuts back to Movie A, with the Chan woman still held captive by the guy, who has a case of reverse stockholm syndrome. The two movies 'mesh' when Mark Abbott calls a subordinate to see if Mel's 'ex-wife' Cindy has the manuel. 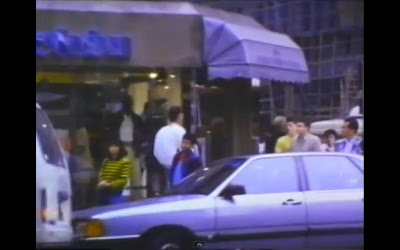 After the police come back to Mrs Chan's house to make sure she's ok, Movie-B Mel is walking on a street. He bumps into a woman, and offers to help her with her shopping. She leads him to her car and into and ambush by other henchman Paul. Mel escapes the scene by...backflipping, and Paul chases after him...by backflipping! Um, yeah... So Mel turns into a pink ninja (in these movies, people would always swirl around and their suits would magically appear on them), and Paul turns into a black one, and they fight, until the woman (she's never named either) shoots at him. After taking Paul hostage and throwing him at her, he runs off and Woman proves herself to be the worst marksman ever-she shoots left, he diagonally runs right, she shoots right, he runs diagonally left, etc.! If this lady had ever played Space Invaders, she'd know how to shoot a moving target properly! Mel then jumps up and teleports away...yeah...ninjas can do that in these movies... 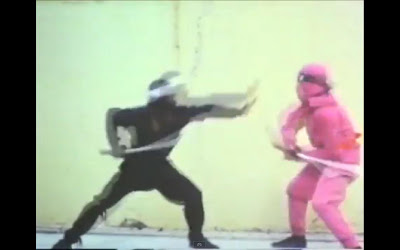 Meanwhile, Chan talks with her 'captor', and come nightfall, the house is attacked by 'John' (what Movie B names the cat burglar ninja from before). The captor guy (he's named Steve) does his best to fight off the constantly teleporting ninja, even deflecting a ninja star with a cushion! He wakes up, the previous scene possibly having been a dream, and the movie segues into a 90's sexophone skinemax scene (in which Chan looks like she's cowgirl riding thin air).

Next, cue montage time in Movie-B! Mel gears himself up and trains for the final confrontation with Mike Abbott and his henchman. Back with Chan, her cousin Winny arrives, and several armed thugs wait outside. And it's here where Chan's name is said to be Cindy. Well good, I've only been waiting half the damn movie to find that bit of info out! Then Winny's dubbed voice almost turns Scottish. Then a sports montage of Steve and Winny happens, and the ET theme plays! Everything goes fine until John attacks. Steve ninjas up and gives chase. The two ninjas battle with smoke bombs and scythes (Children of the Corn XI: When Ninjas Attack!...well it wouldn't be the farthest that the series has deviated before). 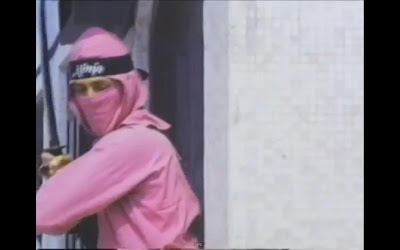 After the fight ends (John escapes), Steve tells Cindy what happened to him. So the house from before that John broke into, that was his, and his wife was murdered by John...I think. CUE HAPPY MUSICAL SCENE! So poor Steve, who's wife was brutally murdered only a few days prior, is being henpecked by two women who both want to jump his bones!

The film cuts back to Movie B, with Paul and Chick reporting to Mike Abbot. They hand him a ninja star left at the battle, and he recognises it-this mysterious man named Mel, who Abbott has never heard of is really...Mel, his old training associate...Um, yeah. He then namedrops Steve, claiming that he, along with Mel were a ninja trio training under their ninja master (ninja ninja, ninja). Then Abbot yells the film's best, and most overacted line!-"I was so close to becoming the ULTIMATE NINJA!!!!". 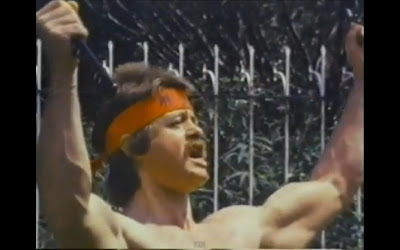 Movie A comes back, again armed with the ET theme, played over a happy romp on the beach (ughhhhhhhh, will something happen in this movie?!). Then Movie B comes back, when Paul and Woman are ninja suited-up and ready for battle with Mel. They have a long fight, which involves sword throwing and coloured smoke bombs!

The film cuts back to Steve, Cindy, Winny and a couple others, who decide to stop by a house, as night's coming. Stuff happens, stuff hapens, and the film is eventually ready for Mel and Mike Abbot's final showdown... 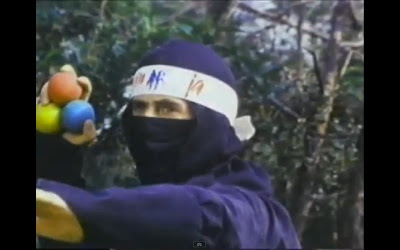 Twenty minutes of Rage of a Ninja are very fun! Full of absurdly multicoloured ninjas, straightfaced actors, and hilariously ridiculous moments! The other hour though-Movie A-is boring, confusing, uneventful, and unexplained. I still don't know who Steve was, or what he did, if he was guilty, or if he was framed, and it really doesn't help when the movie doesn't have an ending! Steve helps the police dispatch John and a few other henchman...of someone, and when Steve takes down John, the movie just stops. The only entertaining things about this plot are the sex scenes, and the use of the ET theme, Alan Parsons Project's Sirius (used in the finale of American Commando 3: Savage Temptation) and the climax music from Crackdown Mission!

The ending to the Godfrey Ho story is sheer brilliance though. Mel and Mike Abbott square off, and after a brief gunfight, they ninja up and fight a fight that lasts only forty seconds, and has one of the funniest, most abrupt endings I've ever seen in one of these movies! The two square off, then Abbott jumps up into a tree, Mel throws a few bombs up into it, they explode, fluero yellow material rains down for a split millisecond, then the The End powerpoint card comes up! 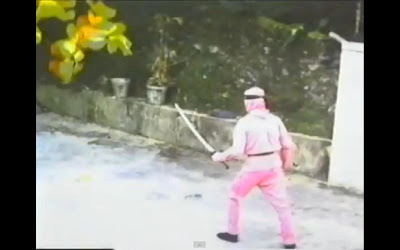 He may be wearing bright pink, but he is a badass!
Posted by Chris Hewson at 12:13 AM