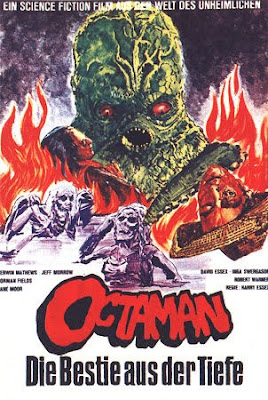 
The movie starts off crediting The Octaman as a cast member in the opening credits. When the credits finish, the movie cuts to Mexico, where Dr. Rick Torres (Kerwin Mathews), a scientist, and his associate Susan Lowry (Pier Angeli) are. They have been sampling the blood of 'primitive' people, as their main diet is seafood, so he can get evidence that chemical material is being transferred via currents from underwater nuclear detonation spots to all over the world, and the food these people are consuming is dangerous.

One of his work team, Raul, approaches him with a canister containing a mutated baby octopus. They go to the river where it was found and they let the octopus go, to see what it'll do. They see that the baby octopus is still by the river's shore, and they guess that it's waiting for a signal. They leave, and unbeknowenst to them, a larger, man-like octopus mutation is in the river... 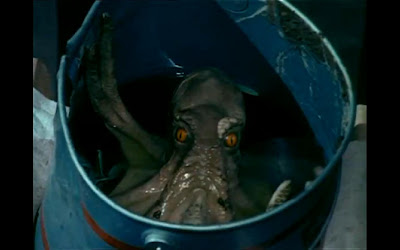 Come Nightfall, Raul dissecting the baby octopus, when Octoman attacks! Octaman kills Raul and takes the dead baby octopus with him as he leaves for the river. The movie cuts to a city somewhere, where Torres is visiting an ecological centre-run by Dr. John Willard (Jeff Morrow). Torres shows Willard and others the baby octopus that he found (then what was being dissected back in Mexico before?) and explains that human cells were found in the octopus' DNA. Willard is skeptical that the water pollution caused the mutation and refuses to extend Torres' grant. 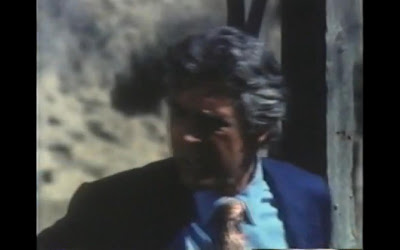 Torres goes back to the country and meets up with a cattle-wrangler, Steve Dodd, who tells Torres about Johnny Caruso, a businessman who wants a circus attraction of some sort, and has taken a liking to the idea of a man-fish. Eager for a grant (I think), Torres meets up with Caruso and accepts his business offer. A while later, Torres, Susan and others go to his science worksite and find the place deserted. Torres comes across Raul's body and sees that he's been mangled by an animal. 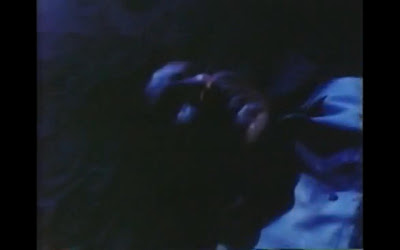 The next day, some locals tell Torres of a local legend of a half man-half serpent, that has supposedly killed people over the decades. Torres and Susan walk around the area, as do two locals-and so is Octoman! The two go into a house, and Octaman follows. He goes inside and *octa-bitch slaps and tentacle-stabs the two to death!

Meanwhile, Torres, Susan and a bunch of others talk about life, science and everything, and Octaman comtinues to prowl around the area. The next day, the team do more tests, and talk more about mutations. Susan walks around on her own, and bumps into Torres, who she's glad to see, as she's scared and feels like she's being watched (then why are you walking off in the wilderness alone, you dumbass?!). 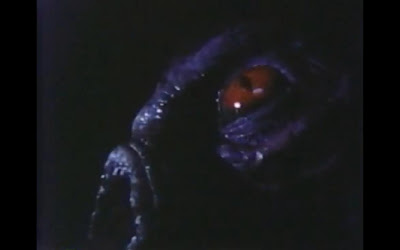 Two guys start to doubt that they're ever going to find anything. Luckily for them, they find something immediately after...or rather, it finds them. After killing one of them and knocking the other out cold, Octaman knocks over a few canisters, steals one, and runs off. The bodies are soon found, and everyone hears Octaman's octa-whistling. The knocked-out guy comes to and tells everyone what happened. 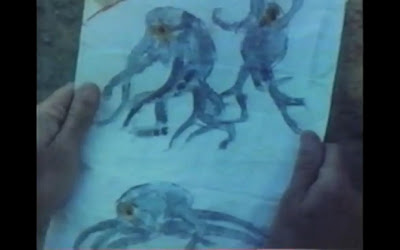 Later that night, Susan and another guy are talking in their RV, until they're attacked by Octaman. The guy gets a rifle and blast at Octaman until he octa-trudges off. Everyone wonders whether or not to simply flee or try and take the octo-beast on. A few guys go off in a boat across the river in search of the monster. Soon enough, they come across Octaman, and he grabs the boat from beneath and tries to tip the boat over, but gets its hand cut off by the men. Octaman grabs and drags one into the lake, but after firing a bunch of lead into the water, the guys get their friend back...but their motor has stopped working. 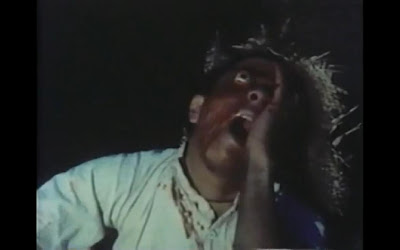 Susan goes off on her own again when she calls for one of the men and they don't come. She goes back to the RV, oblivious to the watching eyes of Octaman. Octaman then breaks into the RV and is firebombed by Susan. Regardless, he grabs her and instead of killing her, he carries Susan away like he's King Kong and she's Fay Wray. A bunch of the guys ambush Octaman and blind him with lights until he drops Susan. They douse the area in a circle of gasoline and set it alight, then rescue Susan. Then one of the guys has an incredibly stupid line! He says that the fire will burn the oxygen away and suffocate the creature...even though this is outdoors and the fire ring is very wide and only about five inches tall! I have 'vague' doubts that such a theory will help defeat OCTAMAN! (Or maybe it can work, I don't totally know for sure).

Octaman passes out due to the 'lack of oxygen' and he is netted and tranquilized. Despite Caruso wanting to take Octaman back to the city, Torres wants to study it in it's natural habitat. A little later, a storm starts and Octaman wakes up and breaks free... 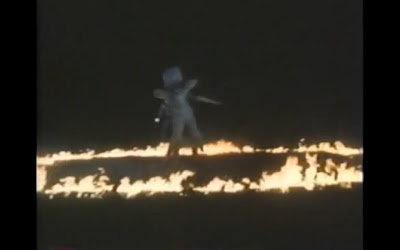 Octaman is definitely an entertaining watch! The acting is decent and the direction is ok. The film does get pretty boring in its last third though, and when Octaman is destroyed, it isn't by some clever plan or something like that, everyone just starts shooting him (even though that didn't work before), and he eventually dies. The start of the climax is hilarious and more than makes up for the previous fifteen minutes of characters sitting down and trudging around in caves. Everyone leaves the cave and go towards the RV and they open the door and Octaman is in there! Seeing as how he has tentacles and all, I'm not sure how he managed to open and close a door for his ambush, but he did, and the film is better for it! 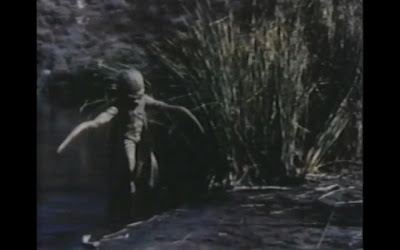 As for the effects work, it's all terrible! The plastic-looking baby octopus mutant looks hilarious, and Octaman himself is awesome to look at!-A guy in a wobbly rubber suit with swaying tenacles and a plastic face!

Octaman is boring in some places, but it's still a decent Creature from the Black Lagoon style movie, but though Octaman may be awesome, he is no Gill-Man!...
Posted by Chris Hewson at 9:05 AM